In a shift, Conservative movement publicly lists the rabbis it has expelled and suspended

Katie Couric reveals that her mother was Jewish in new autobiography

Will US deny Israel sovereignty over Jerusalem by reopening consulate for Palestinians?

The Jewish Sport Report: This month will now be known as Joctober

Sunrise movement: DC chapter’s singling out of Jewish groups is ‘antisemitic and unacceptable’

“Bahrain, like Israel, encompasses an ancient history along with extraordinary capabilities of the new technological world. Our opportunities are shared, our threats are shared, and they are not far from here,” Lapid said in a joint press conference with his Bahraini counterpart, Foreign Minister Abdullatif bin Rashid Al Zayani.

The embassy is located on the 29th floor of the Bahrain World Trade Center in Manama. Israel has appointed Eitan Na’eh as its ambassador to Bahrain, although he has not yet been confirmed.

Lapid and Zayani, accompanied by U.S. chargé d’affaires in Bahrain Maggie Nardi, also toured the USS Pearl Harbor at the U.S. Fifth Fleet based in Bahrain and met with U.S. Vice Admiral Brad Cooper, who commands the American naval forces in the region.

“Israel, Bahrain and the United States are partners in liberty and in a vision of a free world,” Lapid said on Twitter. “Economic growth and an interconnected world are based on both security and free and safe shipping lanes. These too are guaranteed through strong coalitions.”

Lapid also met with Bahrain’s King Hamid bin Issa Al Khalifa at his palace in Manama, the first meeting between the king and an Israeli official, as well as with Salman bin Hamad Al Khalifa, the prime minister and crown prince. 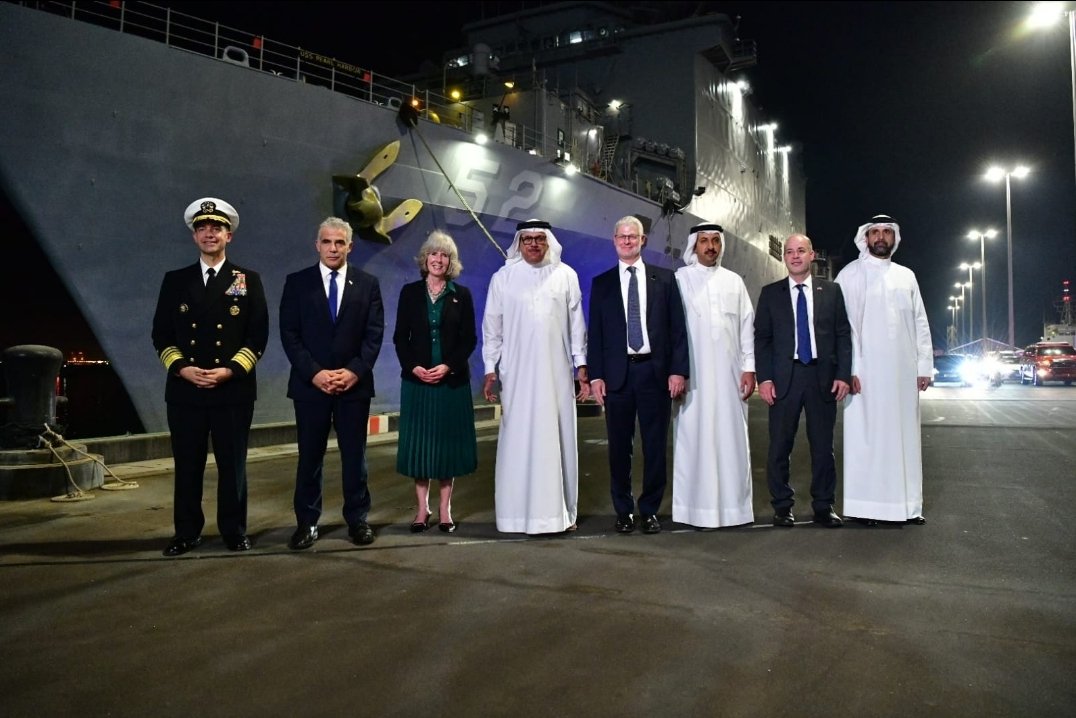 Meanwhile, commenting on Lapid’s visit to Bahrain this week, Iran’s foreign ministry called it a stain that “will not be erased.”

“We condemn any scheme that bolsters Israel’s destructive presence in the region,” Iranian Foreign Ministry spokesman Saeed Khatibzadeh said in a statement carried by the official IRNA news agency.