Love and generosity: A farewell tribute to Sheldon Adelson

Blinken: Biden administration will consult with Israel on Iran moves

In Israel, women ‘juggle it all’ with motherhood, degrees, even high-tech startups

Thousands attend secret Hasidic wedding in Brooklyn, many reportedly from Europe and Israel

In Azerbaijan, patriotic Jewish soldiers are poster children of the war with Armenia

When Mendy Sternbach first traveled to Nigeria from Brooklyn, N.Y., in 2014 as a 21-year-old rabbinical student to help out for the High Holidays, he didn’t expect that one day he would be putting down roots in Africa. But year after year, something drew him back—and now he and his wife, Mazal, are about to embark on establishing what will be Chabad’s 11th permanent presence, in sub-Saharan Africa, in the continent’s most populous city.

While simultaneously studying in New York and Israel to earn his rabbinic ordination and rabbinical judicial degrees over the past six years, Sternbach returned to Nigeria for almost every Jewish holiday. He occasionally remained for extended periods of time to assist Rabbi Israel and Haya Uzan, who established a Chabad center in the Nigerian capital of Abuja in 2012 and have since provided the necessities for Jewish life to the 1,000 or so Jews living in the country.

Despite the challenges of both a new continent and culture, Sternbach told Chabad.org that “the overwhelming support from the local Jews and the never-ending work,” gave him the impetus to return each year. “The community was always asking: ‘When will you be back?’ ” said the young rabbi.

Sternbach, who is 27, and his wife, who is 22, will now be opening their own Chabad House to serve about 450 Jewish residents in the coastal city of Lagos, Nigeria—Africa’s most populous city of 17.5 million and the continent’s fourth-largest economy.

“Nigeria has tremendous economic potential and with its growth, the Jewish community is expected to grow as well,” said Sternbach. “We will be here with the infrastructure in place, ready to serve their needs and achieve the directive of the Rebbe to bring Torah study, the permanence of mitzvahs, and the love of G‑d and Jewish tradition to every place in the world where Jewish people can be found,” he declared.

Following her graduation from Beth Rivkah high school in Yerres, France, and seminary in Montreal, Mazal Sternbach served as a teaching assistant in Wisconsin. “While in Milwaukee, I received a call from Rabbi Uzan asking me to come to Nigeria to help him with educational programs,” she said. “It was an amazing experience. The community in Abuja was so welcoming. I was involved in directing the preschool, an online school, running children’s programs, CTeen, Shabbat and holiday programs. Nigeria is such a unique place, and I feel so lucky to be a part of this beautiful project.” 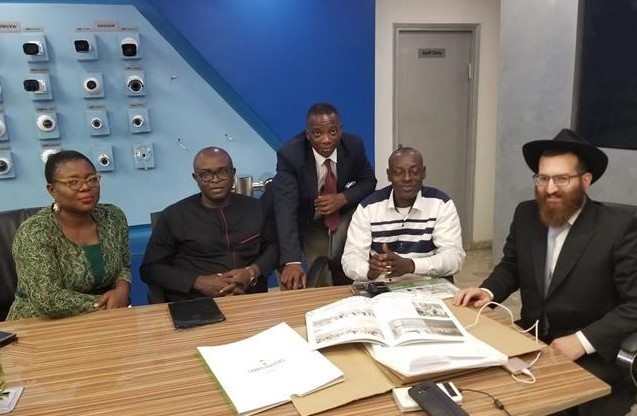 ‘It isn’t always so easy’

The Sternbachs were married in Paris in 2019 and are about to embark on establishing the latest Chabad center under the auspices of Rabbi Shlomo Bentolila, Chabad-Lubavitch emissary to Kinshasa in the Democratic Republic of the Congo and director of Chabad’s operations in 10 nations in Central Africa.

The Jewish population in Nigeria mainly consists of businesspeople and expatriates working for international corporations and aid organizations, primarily in the cities of Abuja, Lagos and Ibadan. Dozens of Israeli companies in the spheres of construction, infrastructure, high-tech, communications and information technology, agriculture and water management operate in the country. Solel Boneh (RCC), one of Israel’s largest construction and civil-engineering companies, has been carrying out major infrastructure projects in Nigeria and other African countries for decades.

Yair Serrano, a Chilean-Israeli businessman based in Ibadan—a large city 80 miles northeast of Lagos—has been living in Nigeria for the past nine years. He is the chairman of a company that provides agricultural equipment and technologies, including poultry vaccines, incubators, chicken coops and nutritional additives, to the local market. He said that he travels to Lagos for holidays to be among fellow Jews and to benefit from Chabad’s activities; occasionally, “Roving Rabbis” also visit Ibadan.

“I have lived in many places around the world and Chabad always brings Jews together, regardless of political affiliation or level of observance. Chabad connects us to our Jewish heritage,” said Serrano. “In the past, when RCC was involved in a local infrastructure project, there were more Israelis here (in Ibadan) and even a Jewish school. But by the time I arrived, most of them had left, and only five Jews now remain.

“Judaism is important to me, and Rabbi Mendy and I have a strong relationship. I am very appreciative of Chabad. It is not taken for granted that Chabad sends emissaries here, despite the many dangers and difficulties; it isn’t always so easy,” he added. 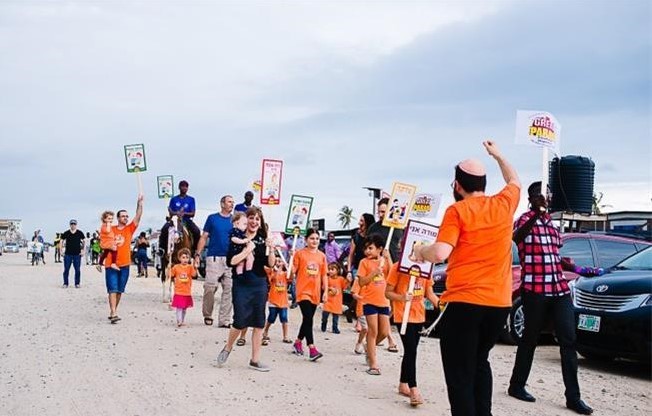 Jewish children on a parade of pride in Lagos, Nigeria. Credit: Chabad.org/News.

Nigeria’s population is roughly divided among Christians and Muslims located mainly in the country’s north. The average Nigerian is religious and has very favorable views regarding Jews. “Anti-Semitism does not exist,” attested Sternbach. “The locals love Jews and often approach me in the street to ask for a blessing. They tell me that we Jews are ‘a light unto the nations.’ Local businesses are also eager to assist with Jewish programs and activities.”

“There are so many Jewish souls to light up. We have come to realize that this is our life’s work, and we are proud of it,” said Sternbach. “Chabad is the focal point of Jewish life in Nigeria. It brings Jews together. During our events, we often witness otherwise fierce business rivals sitting and talking together in friendship. That’s something that feels great to be a part of.”

Reprinted with permission from Chabad.org/News.

The post Largest city in Africa gets its first full-time rabbi appeared first on JNS.org.