Woman threatens rabbi with a knife on street in Vienna, steals his kippah

The miracle of Hanukkah will go on

US special envoy for Iran announces plans to tighten sanctions

‘We don’t operate according to Hezbollah’s equations’

“In this time of great darkness, the souls who come down now must be sources of great light.” — Rabbi Doniel Katz, whose youngest child was born this spring

There is a tradition among the Jewish people that on the eighth day of life, a baby boy is carried to his brit milah (bris being the Yiddish word) by his godfather—or alternatively someone who’s childless, as a segula (“blessing”) for conception. The infant is then deposited onto the waiting lap of the sandek, an honorific typically given to his paternal grandfather, or a beloved rabbi or teacher, on whose knees the baby is then circumcised.

Similarly, at a simchat bat or baby-naming ceremony for a girl—having traditionally received her name at the Torah on the first Shabbat after her birth—the infant also makes the rounds from one set of loving arms to the next, collecting kisses and blessings as she goes.

But today, with the universal risk of COVID-19 infection on everyone’s minds, parents are foregoing the baby-passing and the kisses; everyone in attendance is masked and gloved; or, more often than not, the blessings come from miles away courtesy of Zoom.

So, although family and friends still need to surround their new additions with love, the ceremonies designed to welcome them have rarely been logistically trickier.

Take Rabbi Sarah Bassin and her husband, Jordan Reimer. When it came time for Ronan Wyle Bassin-Reimer’s brit last month, it was just them and the mohel (“ritual circumciser”) in their home.

“It was so hard to feel the pain of our families not being able to see the baby and hold him,” says Bassin, who serves as the associate rabbi at Temple Emanuel in Beverly Hills, Calif. It’s especially difficult for her husband’s family, she adds, as he’s their first grandchild. They were among the hundreds of relatives, friends and congregants, from as far away as Chicago; the Kansas City area; New York; and Washington, D.C, who joined in a Zoom celebration the following day.

“We’re certainly well-taken care of between the congregants and the meal train,” says Bassin. “But we don’t get those joyous, in-person interactions with family and friends that we otherwise would have.”

The silver lining? “Hundreds of people who wouldn’t have been able to attend otherwise were able to meet the baby and share our simcha on Zoom.” 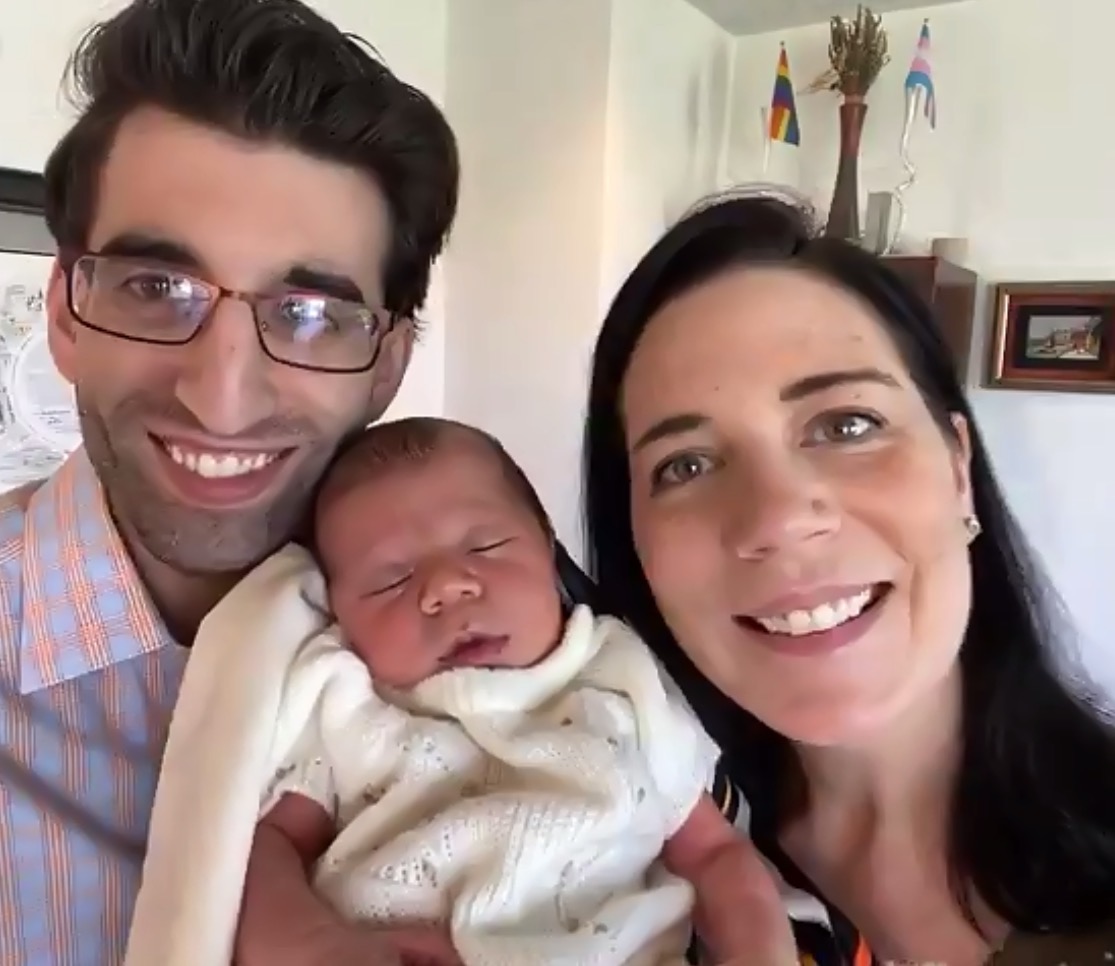 ‘Something we used to take for granted’

Indeed, like Ronan Bassin-Reimer’s, most of the brit milahs he performs these days are intimate affairs with just the star of the show, his parents and himself, says Dr. David Rawdin, a pediatrician-turned-mohel who in the last decade has circumcised more than 2,000 babies in the Philadelphia area and beyond.

“It’s definitely disappointing, but the families get it,” he says. “They know safety and health come first.” To make long-distance participation as interactive as possible, Rawdin gives Zooming relatives the opportunity to do a blessing over wine or challah, and grandparents and aunts and uncles are invited to speak about, or to, their new family member. “It’s very emotional for everyone,” he says. “What’s wonderful is that they still have that spiritual feeling; despite the distance, everyone knows that something important is happening.”

One corona-time highlight for Rawdin: the brit, where one father announced to his Zoom guests that he was donating the money that he would have spent on food and drink for his son’s big day to a charity feeding the hungry. “It reminded me,” says the mohel, “that something so good can come out of something so difficult.”

Even if it has to wait a while.

Parents Aaron Bregman and Caren Auchman of Washington, D.C., had been postponing the naming ceremony for their daughter until baby Simone was old enough to travel to her father’s home synagogue up in Peabody, Mass. The idea: to be able to celebrate with family and the community he grew up in.

And that sounded like a great idea until coronavirus got in the way.

In June, 7 month-old Simone finally got to officially receive her name before the Torah at Peabody’s Temple Ner Tamid, courtesy of Zoom.

That’s how her parents in Washington were able to attend (virtually), say the blessings and speak about the name Simone Lola (after two of her great-grandmothers: Auchman’s grandmother who survived the Holocaust and Bregman’s grandmother). 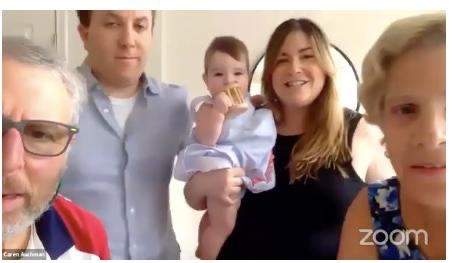 Baby Simone Bregman, along with her parents, Aaron and Caren, and grandparents, Marty and Sharon, took part in a Zoom Baby Naming conducted by Temple Ner Tamid in Peabody, Mass. Source: Screenshot.

Thanks to modern technology, Auchman’s parents were able to be there all the way from Los Angeles, along with friends and assorted family from around the United States. Bregman’s parents? They drove down from Boston to celebrate the naming of their first grandchild—in person.

“It’s really important to us that she grows up as part of a Jewish community, learning all the Jewish songs in preschool and getting a Jewish education—all the things we were able to do growing up,” says Auchman. “But today, even the JCC baby classes are on Zoom.”

Another frustration: “Now we can’t just pick her up and fly her to Los Angeles to see my parents,” she adds. “That was something we used to take for granted.”

One bright spot: “She’s so little,” says her mom. “G-d willing, by the time she’s old enough to remember things, this will be long over.”

Indeed, this eye on the bright spots may be the secret to truly appreciating a brit or naming at this time, says Rabbi David Aaron, author of such books as Endless Light and The Secret Life of G-d, and dean and founder of Isralight in Jerusalem’s Old City.

“Especially for grandparents, even when we’re not able to be there, this is a real chance to work on acceptance and gratitude,” he says. “It’s a time to focus on what we do have, including this amazing opportunity we’re given as grandparents to see our family growing and expanding, even if it’s on Zoom.”

So says Aaron, whose own grandson was born at the peak of Israeli lockdown when there could be no more than 10 people at a brit. “Everyone was in masks. It was very small and very quiet, but an incredibly moving experience nonetheless,” he says. “Somehow, we merited to be this new person’s grandparent, and that’s a big honor.”

‘The message of hope’

Baruch Aharon Ahuvyahu was officially welcomed into the Jewish people on June 19. Just two days before Father’s Day, the brit represented a great gift for his father, Eitan Ben Avraham of Pardes Hanna, Israel, who at 42 is a father for the first time.

For Ben Avraham and his wife, Shira, surrounded as they were by a few dozen masked guests gathered at a local synagogue, the absence of their parents was especially painful: They could only attend remotely—his from New Jersey, hers from South Africa. This was certainly not according to plan; their parents had booked their airline tickets well before the due date. 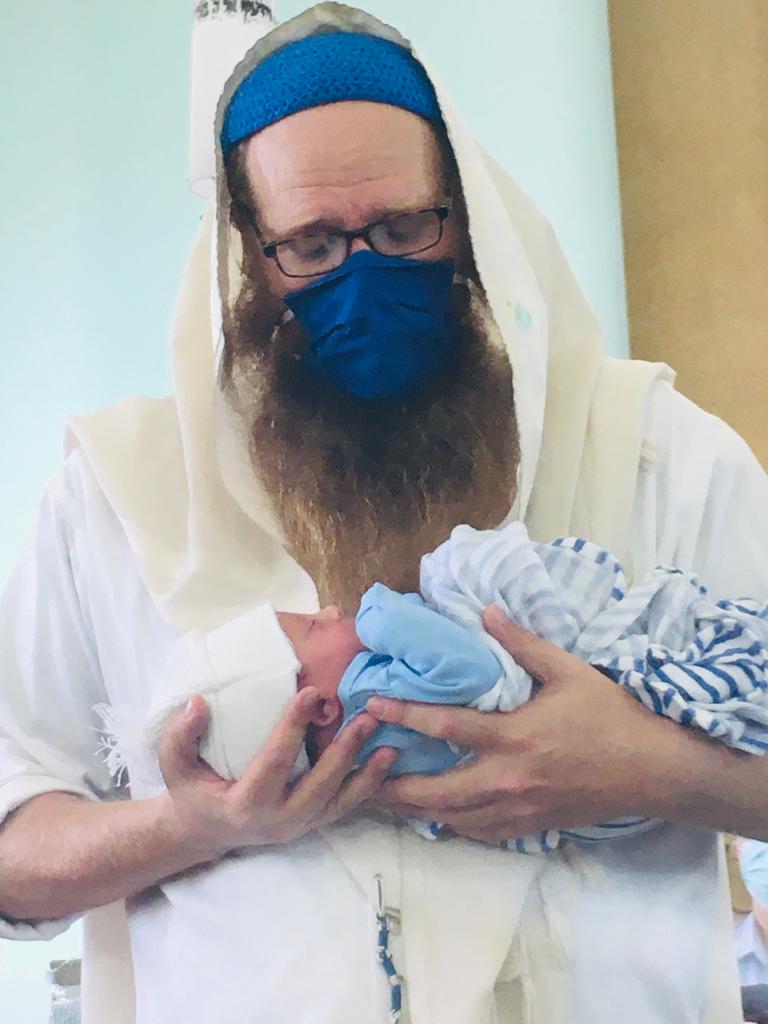 “We have an amazing community; they’re our extended family, and they’ve been so supportive,” he says. “But we miss our parents and siblings, especially since when you become a parent you’re more deeply rooted in your family tree than ever before.” (One comfort: Ben Avraham’s Israeli aunt and cousins were able to attend in person).

“Still,” he adds, “I can see that my mom, as far away as she is, already adores her new grandson.”

And California mom Bassin says she can already envision the day many years from now when they can tell their son the “unique circumstances into which he was born—a civil uprising in addition to the pandemic—and how his birth was the message of hope that only a baby can bring.”

As Rabbi Aaron puts it, “It takes courage to embrace new life at a time when the things that seemed to be written in stone are not anymore, and all that is eternal is our connection to G-d. That’s why they named our new grandson Tuvia, which means ‘good,’ to remind us that even when things look very bad, there is still so much good.”

The post Masked mitzvot or joy undimmed: Welcoming new life in the era of COVID appeared first on JNS.org.