New anti-Semitic inscriptions were discovered in the 14th district of Paris on Thursday.

According to press reports, a dozen of these inscriptions featuring swastikas and the words “Death to the Jews” and ‘’Dirty Jew’’ were tagged in two streets of the French capital.

On Twitter, Olivia Polski, Deputy Mayor of the 14th district denounced an “intolerable and unbearable hate.” Police have opened an investigation for “racial hatred.”

In another incident, police on Tuesday discovered an anti-Semitic inscription painted in black on the wall of the synagogue of the city of Bry-sur-Marne, near Paris,  The tag was signed by LDNA, the “African Black Defense League.’’

On the same day, thousands marched in Paris and elsewhere throughout the country against anti-Semitism. 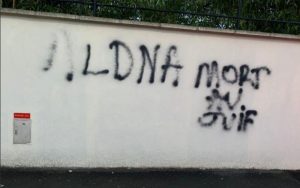 An anti-Semitic inscription painted in black on the wall of the synagogue of the city of Bry-sur-Marne, near Paris, signed by LDNA, the “African Black Defense League.’’

In recent weeks, several anti-Semitic inscriptions have been discovered in Paris, including on portraits of  late Simone Veil crossed with a swastika or the word “Juden” (Jewish in German) tagged in yellow letters on the window of a bagel shop.

On Wednesday, as he addressed the annual dinner of Crif, the umbrella representative group of the Jewish community in France, French President Emmanuel Macron announced a series of measures in response to the increasing spate of anti-Semitism  in the country.

He also announced that France would adopt the International Holocaust Remembrance Alliance’s definition of anti-Semitism and called anti-Zionism “a modern form of anti-Semitism.”

Alarming figures released this month by the French government showed that anti-Semitism rose by 74 percent in 2018.