Hamas in the Gaza Strip has remained highly active in its efforts to plot and implement terror attacks in the West Bank. Its operatives have been working in the past few months to orchestrate attacks, and while there has been a reduction in the number of incidents during the height of the coronavirus outbreak, this is mainly due to the fact that the territories have been in lockdown with little movement across the board.

Nevertheless, the virus and its knock-on effects have not influenced Hamas leaders at headquarters in the Gaza Strip, who continue to try and recruit operatives around the clock in the West Bank for attacks.

Last month, the Shin Bet made an announcement that signified how constant the threat remains, albeit submerged from view for the most part. The agency stated that it broke up a Hamas terror cell that was plotting a series of bombing attacks in Jerusalem, including targeting the landmark Teddy Stadium. Other plots eyed Israel Defense Forces’ positions, as well as roads near Ramallah with remote-controlled explosives. The terror suspects were arrested.

According to the investigation, they met during their studies at Birzeit University near Ramallah, where a Hamas student organization operates—the largest one in the West Bank. The organization, known at the “Kutla Islamiya,” is devoted to “resistance” to Israel, and is often used by Hamas to promote its ideology and for recruitment. 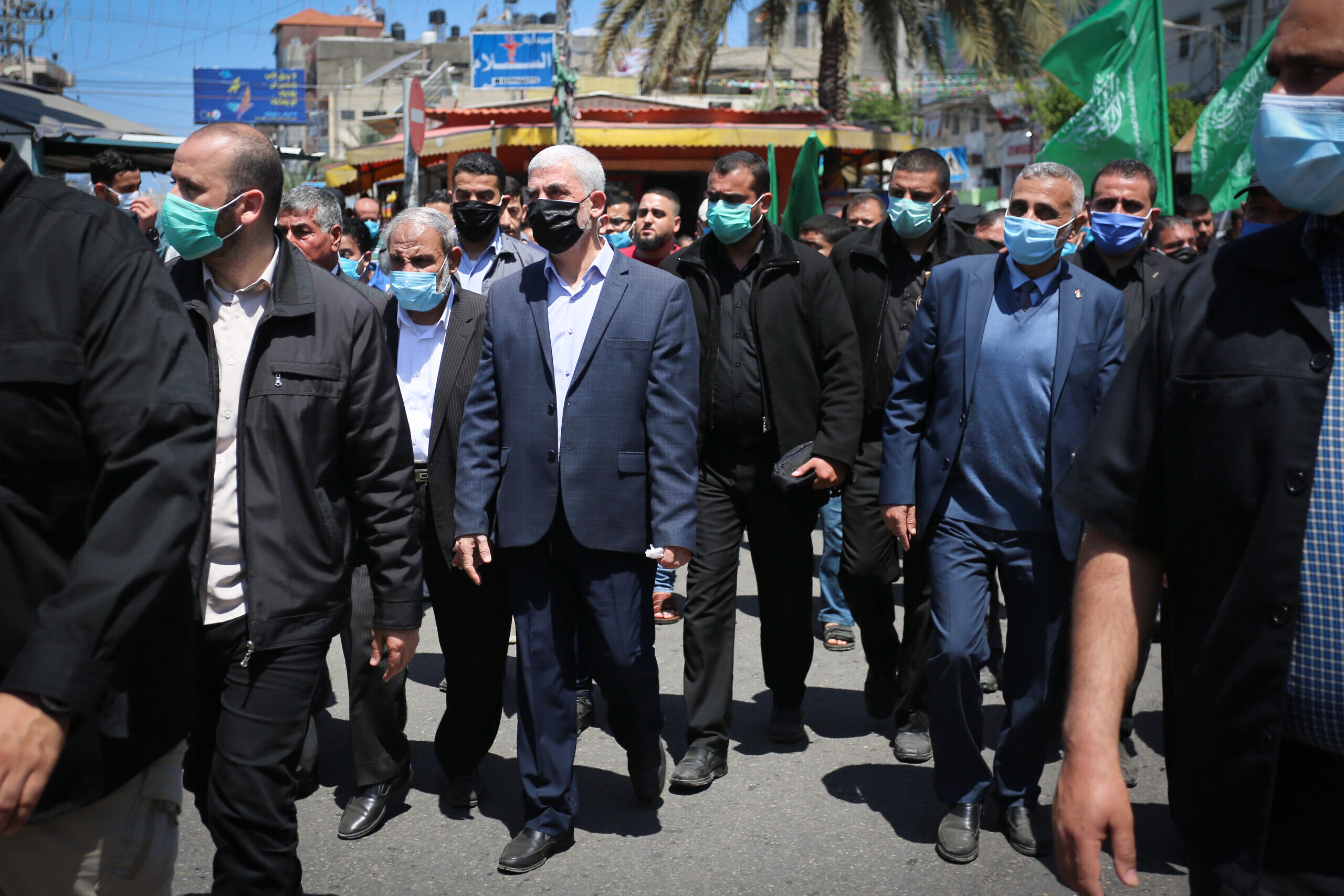 Palestinian Yahya al-Sinwar, the leader of Hamas, takes part in the funeral of Osama al-Kurd, a Hamas leader, in Deir al-Balah, central Gaza, on May 10, 2020, Photo by Abed Rahim Khatib/Flash90

Tens of thousands of shekels were transferred to the cell’s members by a senior Hamas member, a resident of Ramallah, who is also an operative in the Kutla Islamiya of Birzeit University, according to the Shin Bet. “He was the liaison between the cell’s member and Hamas, and he has been in prior administrative detention due to the risk that he posed to the security of the area,” said the Shin Bet.

The break-up of the cell prevented a major series of armed attacks against civilians and soldiers, and is part of a long line of plots thwarted by Israeli security forces in recent months.

In 2019, the Shin Bet domestic intelligence agency, together with the IDF, foiled more than 500 significant terror attacks, including bombings, shootings and kidnappings, many of them planned by Hamas and many targeting Israeli cities.

At the same time, Hamas politburo chief Ismail Haniyeh threatened to kidnap more Israelis if a prisoner deal is not reached.

“A prisoner-exchange deal has a known price. Israel knows that. Either we will come to a respectable deal, or we will go to the other option, which is increasing our loot. Our arm is long,” Haniyeh said according to a Ynet report.

End of a quiet period in Gaza?

Erlich noted that in Gaza itself, the security situation has been quiet with no border disturbances and isolated rocket incidents. He said two factors could end that. The first is the end of the pandemic era. The second potential route to escalation, he said, could be linked to a future outbreak of the disease in Gaza. In such a scenario, Hamas would face public pressure about its inability to care for critically ill patients, and in response, it could use violence to try and extort Israel to provide economic and medical assistance.

The Meir Amit Center has been releasing regular reports on how health authorities in Gaza and in the Palestinian Authority have been working to prevent the spread of COVId-19.

“In light of the fact that Gaza is highly crowded, has refugee camps and sewage flowing in the streets, Hamas’s performance up to now has been effective,” he said. “Why has it been able to stop the spread so far? Most importantly, because there are only two narrow entry points into Gaza. One is the Rafah border crossing with Egypt. And the second is the Erez border crossing with Israel, which has been almost completely closed from the start of the crisis. And Hamas has invested many resources in Rafah so that it can place all new arrivals in quarantine and monitor them,” he added.

The lack of  organized tourism and the fact that Gaza’s population is relatively young have also helped.

Still, Erlich warned, if the virus does begin spreading in the community, it could “very quickly spin out of control. Because of Gaza’s crowded conditions and because Gazans don’t always listen to instructions about social distancing and masks. In addition, Gaza’s health-care system is not prepared in terms of medical equipment, medicine and ventilation machines for dealing with outbreak in Gaza. Hamas is always living with this dichotomy. It has managed to stop it, but if the virus spreads inside the Strip, that will become a big problem.”

As a result, Hamas has preemptively begun spreading a cover story as part of a messaging campaign, blaming Israel for Gaza’s medical shortages and accusing Israel of destroying the medical system in Gaza. The Meir Amit Center quoted senior Hamas figures—among them Yahya al-Sinwar, leader of Hamas in Gaza—issuing threats, saying that if a shortage of ventilators and other medical equipment develops, Hamas will use force against Israel and “make six million Israeli settlers [sic] stop breathing.”

Erlich said this narrative was designed to distract from the fact that Hamas has chosen by itself to massively neglect Gaza’s civilian needs by investing most of its economic resources in military force buildup programs.

“Weapons, acquisitions, training, tunnel digging—these and other military activities are very expensive. Hamas has allocated very little to the medical system. This is the reason for the shortage, not Israel,” said Erlich. “If their budget had gone to civilian needs instead of military buildup, they would have a lot more money for medical needs. Israel would have helped them more; the international community would assist them more. Their situation could be completely different, and not only in the medical sector.

“But due to their ideology of destroying Israel and conflict with it, they made their choice,” he said. “It projects onto everything else.”