Bus carrying Hasidic boys to weekend retreat in the Catskills flips over, injuring 18

Trump issues proclamation on 75th anniversary of the liberation of Auschwitz

Former Miss Iraq Sarah Idan spoke at the United Nations headquarters on Wednesday about Jewish refugees from the Middle East being largely forgotten, and that there needs to be more awareness of their plight.

“It’s about time. That decision should have happened many, many years ago,” she told JNS. “We always talk about Palestinian refugees and other countries, but we never talk about the Jewish refugees.”

Idan, 29, was one of the featured speakers at an event hosted by the Israeli Mission to the United Nations, in coordination with Jews Indigenous to the Middle East and North Africa, to commemorate Jewish refugees from North Africa and the Middle East. It took place one day after the annual U.N. General Assembly plenary session commemorating the passage of Resolution 181, also known as the “U.N. Partition Plan,” on Nov. 29, 1947.

In her speech, Idan talked about the history of Iraqi Jewish refugees, and the kinship she has always felt for them—how she could personally relate to the struggles they faced by being expelled from Iraq.

The Baghdad-born model and human-rights activist received death threats that forced her to flee her home country in 2017 after she posted online a photo she took with Miss Israel Adar Gandelsman at a Miss Universe beauty pageant. Idan then had her Iraqi citizenship revoked when she blasted anti-Semitism being taught in Muslim countries at the United Nations Human Rights Council in Geneva in July 2019. 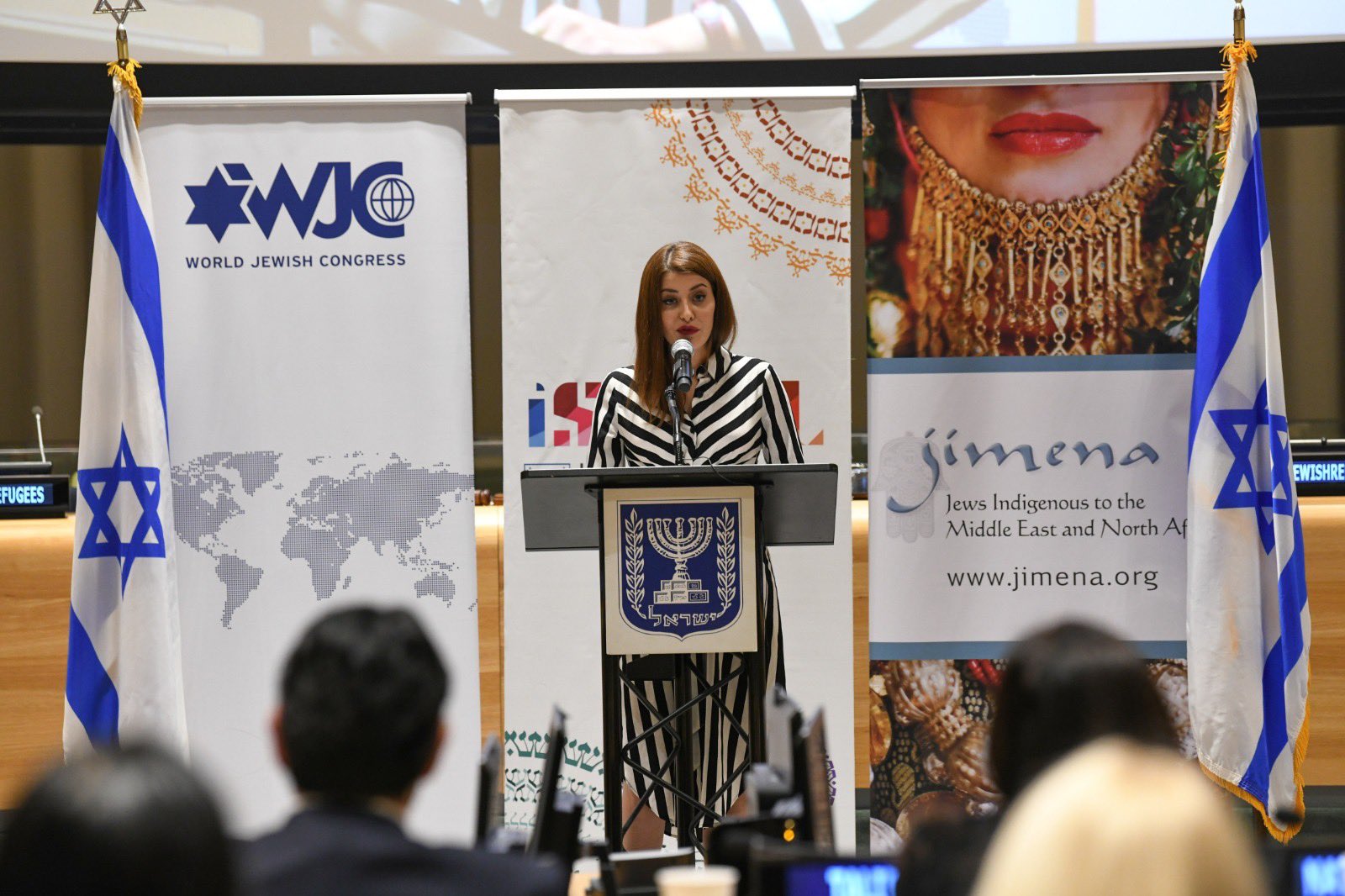 Former Miss Iraq, Sarah Idan, speaking at a Dec. 4, 2019 event at the U.N. headquarters in New York. Source: Israeli Mission to the U.N.

Idan talked about her trip to Israel in 2018, where she met Iraqi Jewish refugees in Jerusalem and connected with them. She said they welcomed her “with open arms and with so much love, even though my country treated them unfairly.”

“When I saw Iraqi government stamps on their passports saying, ‘one-way exit—not allowed to return,’ I started crying,” she said. “I told them I was utterly ashamed. Not because of dirty politics, which led to the ethnic cleaning of 135,000 Jews from Iraq, but by my own people, who watched this happen and didn’t have the courage nor sympathy to stand with the Jewish community.”

She also stated how anti-Semitism paved the way for the expulsion of Jews from Iraq.

“As an Iraqi, I learned so much from parents and grandparents about how the Jews played a pivotal role in the development of our country. What I always heard from my family was that they had such good hearts, was extremely educated, respected and loved. Sadly, a 3,000-year chapter of Jewish life in Iraq, along with the larger Middle East and North Africa, came to an abrupt and traumatic end—and much of this is the result of anti-Semitism.”

She concluded by saying, “It is only by recognizing and facing the historical injustice endured by the 1 million Jewish refugees from North Africa and the Middle East that we can move forward to a better place of humility and healing.”

Israeli Ambassador to the United Nations Danny Danon announced on Tuesday that Israel will submit a resolution to formally recognize Jewish refugees from Arab countries. Also a speaker at Wednesday’s event, he told JNS that he hopes to “put Jewish refugees in the right place in history and change the narrative so in the future, one day, when the issue of the Palestinian refugees will be brought up, we will be able to bring our issues as well.”

He added that if the measure is adopted by the international community, in the “long run” it could be brought up in bilateral peace talks with the Palestinians.

Danon began his speech talking about his late father, Joseph Danon, a Jewish refugee who moved from Alexandria, Egypt, to Israel shortly after the establishment of the Jewish state. Joseph was one of almost 850,000 Jews who were expelled or fled from their homes in the mid-20th century.

“The hate—the anti-Semitism expressed by countries—had nothing to do with borders or settlements,” he said. “The idea of a Jewish state in Israel was enough to reignite the simmering flame of anti-Semitism and have countries turn on their own loyal citizens.”

Danon noted that Jewish communities existed in Arab countries for more than 2,500 years. “Although the Jewish refugees did not forget their heritage and how they were forced out of their homes, unfortunately, the international community did,” he said. “Every time the U.N. talks about the refugees of Israel’s war of independence, they speak only of the Palestinian refugees.” 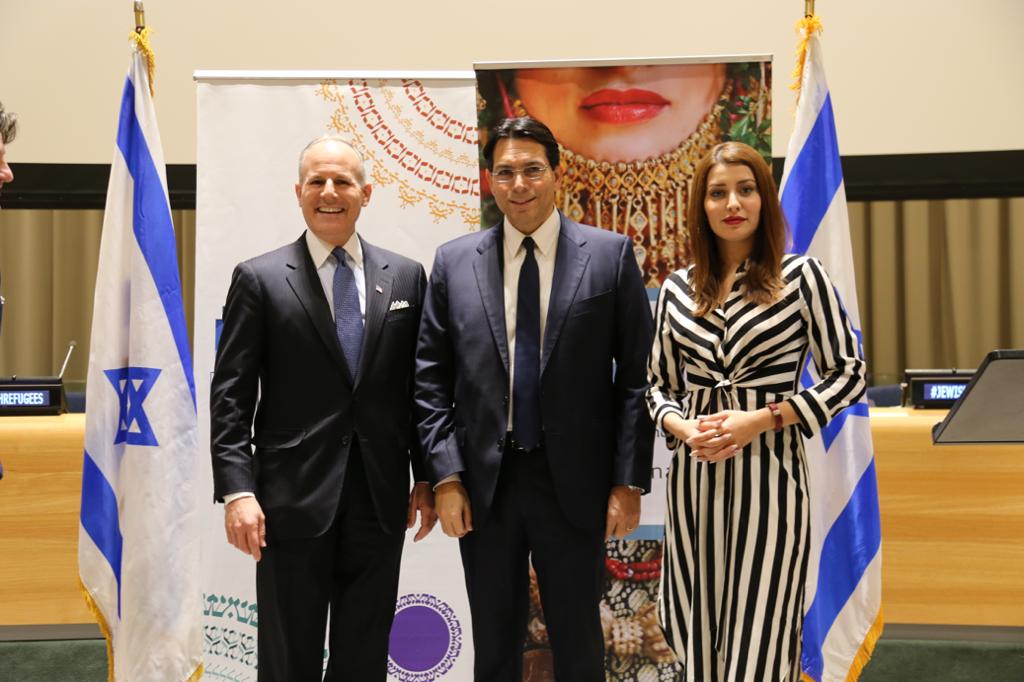 Nathaniel Malka, a board member of the organization Jews Indigenous to the Middle East and North Africa, told JNS that honoring the Jewish community’s history is long overdue. “The history of these [nearly] million Jewish refugees from the Middle East and North Africa is part of the recent history of more than a dozen U.N. members. Our eternal aspiration is peace, and this must be built atop remembrance and truth,” he said.

“For many reasons, some of them regrettable, awareness of our communities’ history is not at the level it should be,” continued Malka. “We welcome any opportunity to educate and engage diplomats and foreign dignitaries on the story of the ignored and forgotten Jewish refugees.”

‘Relentless human sickness that is anti-Semitism’

The U.S. State Department’s Special Envoy for Monitoring and Combating Anti-Semitism Elan Carr also shared a personal story about his grandfather in Iraq, who was rounded up by Iraqi soldiers along with other Jews, paraded through the streets while wearing leg irons and then imprisoned for years, during which his grandmother, mother and uncle fled the country.

Carr insisted that “in order to fight anti-Semitism—whether it’s in the Arab world or Europe or anywhere else—it has to be acknowledged that anti-Zionism is anti-Semitism.”

“Zionism is not a political movement that began in 1948,” he explained. “It is as old as Judaism. It is an inseparable part of the Jewish people as an ethnic national identity, and it is a core religious tenant of the Jewish faith. We want to get serious about this ancient, relentless human sickness that is anti-Semitism. This human pathology leaves nothing but a trail of wreckage and devastation, not only for Jews but for every society that embraces it.

“Let us resolve that we will make a future of friendship,” he continued. “That the people of the Middle East will once again join hands and chart a future of tolerance and friendship and openness and growth and health and progress. If we do that, we will truly build that better world that our children and grandchildren so desperately deserve.”