In rapper Flo Milli’s new single, samples of Zero Mostel’s ‘If I Were a Rich Man’

‘There was something holy about this space’: Meet a rabbi who’s been stationed at the US Capitol

Delivery man to be deported from France for refusing kosher orders

In this original Holocaust film, a Jewish inmate makes up a language to survive

US Army discharges officer who made Holocaust joke on TikTok

A webinar on the video conferencing platform Zoom about anti-Semitism last week, featuring U.S. Deputy Special Envoy for Monitoring and Combating Anti-Semitism Ellie Cohanim, was disrupted by a white supremacist and hacker—an example of what the Anti-Defamation League has called “Zoombombing.”

The Greater Boston chapter of NCSY, a Jewish youth group, hosted the hour-long webinar on March 24 with Cohanim, who told the group of 20 to 30 high school students about her role; about the rights college students have when it comes to dealing with Jew-hatred; and how the United States is working to battle anti-Semitism at home and abroad.

That included through the executive order that U.S. President Donald Trump signed in December to combat anti-Semitism in education, especially on college campuses.

As the webinar concluded, Andrew Alan Escher Auernheimer—also known as “weev,” who has a history of expressing anti-Semitic and other bigoted views—appeared in the video conference and pulled down his shirt collar to show a swastika tattoo on his chest.

The incident lasted for about a minute, participants on the call told JNS. 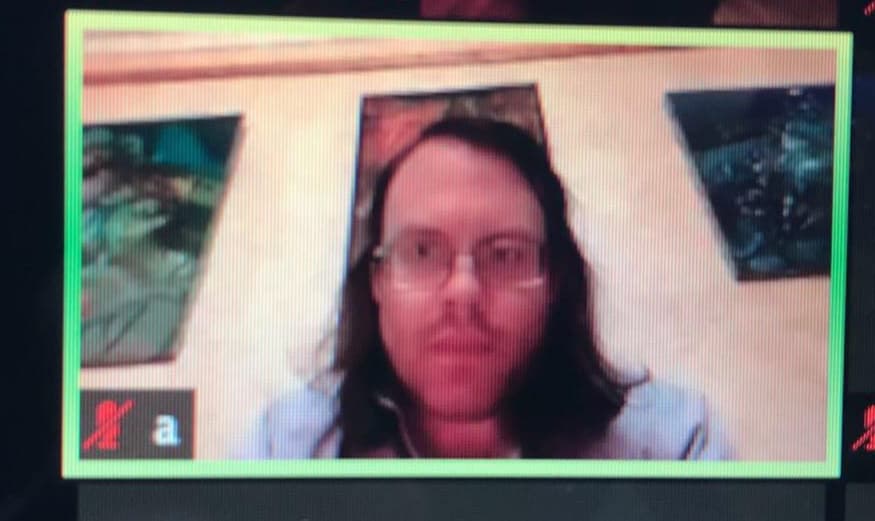 One of the teenage participants snapped a screenshot of Auernheimer on the video chat, while another sent the picture to Bryan Leib, former national director of Americans Against Antisemitism, who helped facilitate the Zoom discussion.

Two teenage participants filed a report with the Newton Police Department in Massachusetts, which declined to comment, citing that the investigation is ongoing.

The webinar was advertised on the NCSY chapter’s website and on Facebook and Twitter. Participants who were on the video conference that spoke with JNS believed that Auernheimer knew of the event because it was publicized on social media.

Cohanim told JNS that she has been in contact with the FBI, which did not respond to a request for comment.

“This administration has made clear that we are not going to tolerate any forms of anti-Semitism. As [U.S.] President [Donald] Trump has stated, ‘The vile, hate-filled poison of anti-Semitism must be condemned and confronted everywhere and anywhere it appears,’ ” she said. “We are currently working with law enforcement to do exactly that.”

“We take the security of Zoom meetings seriously, and we are deeply upset to hear about the incidents involving this type of attack,” a Zoom spokesperson told JNS. “For those hosting large, public group meetings, we strongly encourage hosts to review their settings and confirm that only the host can share their screen. For those hosting private meetings, password protections are on by default, and we recommend that users keep those protections on to prevent uninvited users from joining.”

NCSY international director Rabbi Micah Greenland told JNS that “it is most disappointing that even during this time of great worldwide peril, when people should be joining together in solidarity, there are individuals with such hatred in their hearts that they are harassing Jewish groups meeting via Zoom.”

‘The potential for extremists to exploit these systems’

Despite the incident at the end of the webinar, it was “a very good, strong conversation,” said Cohanim. “And I was really proud of these young women and men who were on the call.”

“Haters will hate, and a time of anxiety and pressure will bring that out even more.”

According to the ADL, “While some of these reported ‘Zoombombing’ incidents can be attributed to Internet trolls without particularly malicious intentions, there is concern that extremists could exploit the increasing reliance on video-conferencing technology to target certain groups or advance their hateful messages.”

The organization added that while “there has been limited online chatter among extremists about the specific strategy of abusing video-conferencing technology, Auernheimer’s recent actions in Massachusetts demonstrate the potential for extremists to exploit these systems.”

On Tuesday, Yeshiva University’s Zoom classes were interrupted by anti-Semites.

“Last night, I was Zoombombed during my pre-Pesach talk with our student body as pictures of Nazis and other offensive material appeared throughout the scheduled time,” university president Ari Berman told JNS. “The experience highlighted to me how one’s true character is revealed during times of crisis.”

“Haters will hate, and a time of anxiety and pressure will bring that out even more. We respond, however, with love,” he continued. “Our goal is not simply to mute the hate, but is to add more goodness and kindness in this world.”