As it conducts its mission to defend southern Israeli communities and vital strategic sites, the Israel Navy is also engaged in a quiet arms race with Israel’s adversaries in the Gaza Strip—namely, Hamas and Palestinian Islamic Jihad.

A senior IDF source told JNS about the ongoing activities of the Ashdod Naval Base, which is responsible for a substantial part of Israel’s coastal waters, stretching from central Israel to southern Gaza.

This area of jurisdiction, known as the Ashdod Arena, sees naval vessels securing Israel’s borders and keeping a watchful eyes on developing threats, explained the source. “We also guard our strategic assets, such as the [offshore] gas rigs and natural-gas production facilities—the whole complex coastal area.”

The ways in which the Israel Navy conducts its daily security missions is changing at a “dizzying pace,” stated the source, due to technological improvements in the IDF and advances made by the enemy.

“Each side is very dynamic,” said the source. “Hence, we always have to think a few steps ahead.”

On the Israeli side, the navy is developing new combat systems, while activating its force in quickly changing ways as part of its broad mission of finding answers to the range of threats.

One of the changes includes closer-than-ever cooperation between the navy and the ground forces of the Israel Defense Forces, particularly the Northern Gaza Brigade, which is active on land to protect Israel from the same adversaries, Hamas and Palestinian Islamic Jihad.

This cooperation is a “force multiplier,” said the source. “We analyze the territory and threats together. A threat that in the past was only the responsibility of the Northern Gaza Brigade is a threat that interests us as well today. We can assist in many ways, and they can help us. It’s a joint challenge.” 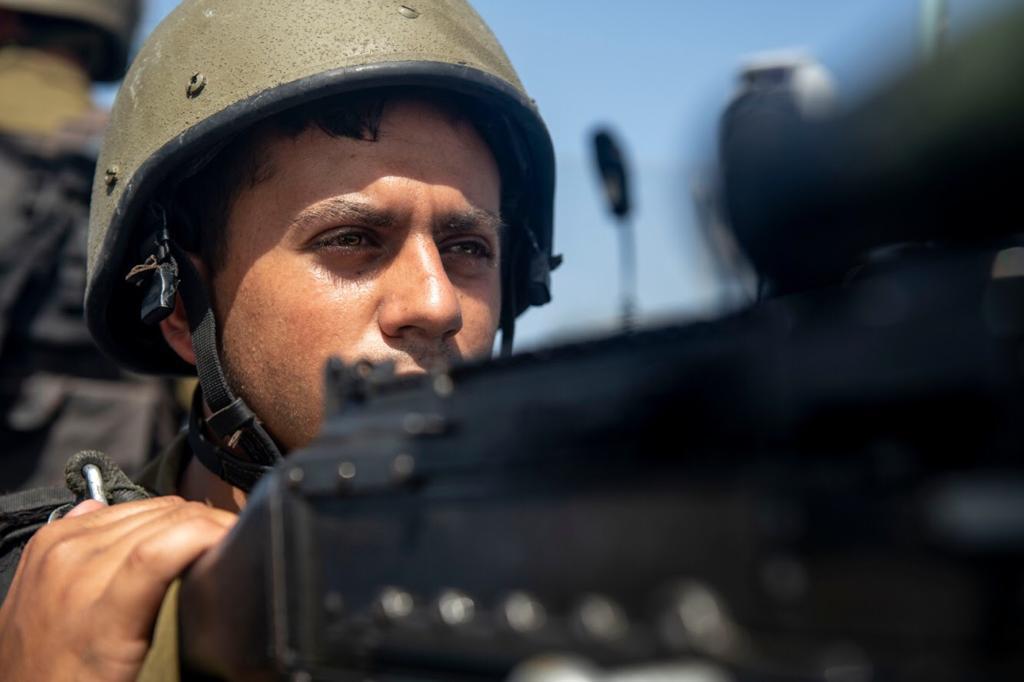 This cooperation has seen naval and ground forces share resources and means while activating a joint command network. Training and inquiries are also held together on a regular basis to create a common language. “Each side has to learn much about the other, about the other side’s platforms and capabilities,” said the source.

Addressing the activities of Hamas and Palestinian Islamic Jihad, the source said that “they are trying to build up their force in every sphere—the air, on the surface and underwater. We, of course, are providing an answer to this in every domain.”

As part of this effort, the navy is upgrading its air defenses, its ability to protect itself on the surface, and its underwater threat detection and response capability. It’s also working on new ways of striking targets in Gaza. “We are preparing for these in a massive way,” said the source.

As the option of smuggling weapons via tunnels is vanishing for Gaza’s terror factions, they increasingly turn to sea-trafficking attempts—as an interception of a weapons ship in February, traveling from the Sinai Peninsula to Gaza—illustrates.

“When one thing closes off, they try somewhere else. And we foil these attempts,” said the source. “Our border defense is highly dynamic. We conduct daily situation assessments.”

‘Vigilant at all times’

Meanwhile, the navy conducts ongoing, daily patrols off the Gazan coastline under all weather conditions.

It often detects Palestinian fishing vessels that violate Israel’s naval restrictions on where they can operate, which are designed to prevent bomb boats and other threats from approaching the coasts.

In such cases, the navy must be able to distinguish between vessels simply seeking to catch more fish from those gathering hostile intelligence or attempting an armed attack.

“That’s the million-dollar question,” said the source. The navy changes its procedures and drills to find out what the intent behind those operating the vessels are. “We have many sensors, and we produce data before approaching the vessel,” he said.

Hamas often seeks to disguise its activities and uses civilian guises to do so. “They try to improve their existing capability and to create new ones. We must always think like them and breakthrough our own conceptions,” insisted the source.

In recent months, the navy has also had to tackle a new and prolonged challenge in the form of the coronavirus pandemic. It has learned to operate under new restrictions. Commanders have had to conduct a “daily battle” with the new situation and ensure that the Navy remains “vigilant at all times, and that our operational forces are strong,” noted the source.

Many sailors have had stay on base for lengthy periods to prevent the risk infection, and the navy has communicated these needs to their families. As the source said, control-room operators have had to work in smaller teams, and the navy was forced to “reinvent ourselves from scratch as we deal with the pandemic.”

The post The quiet race between the Israel Navy and Gaza’s armed terror factions appeared first on JNS.org.