Nestled deep in the Amazon rainforest lies one of most isolated Jewish communities in the world. Located where the Solimões and Negro rivers join to form the Amazon—1,500 kilometers upstream from the Atlantic and inaccessible by roads—Manaus is the capital of the resource-rich Brazilian state of Amazonas. Rabbi Arieh and Devorah Lea Raichman have co-directed the Chabad House in Manaus for nearly 10 years.

A native Texan, Rabbi Raichman recently shared some of the challenges and joys of tending to Jewish life (and raising six children) in a city that sits smack-dab in the middle of a jungle. 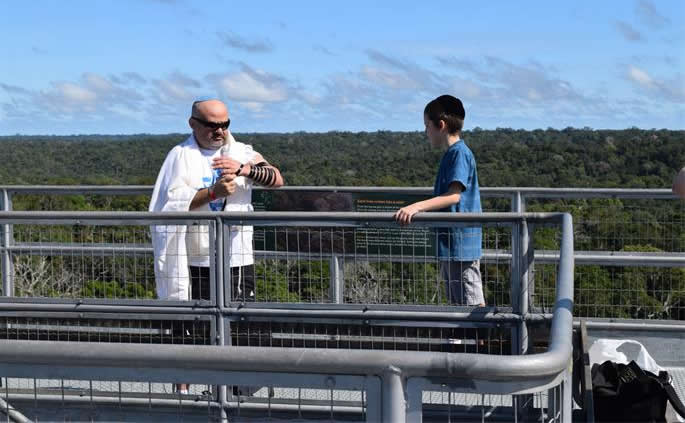 Putting on tefillin with the vast Amazon rainforest in the background. Credit: Chabad.org/News.

Q: Rabbi Raichman, please describe Manaus. Does it really feel different from any other major city in a developing part of the world?

A: In a sense, Manaus is a typical Brazilian city with its fair share of slums, malls, high-rises and highways. But you constantly feel the jungle with every one of your senses.

The heat and humidity here are oppressive, so people rarely walk outside if they can avoid it. It rains a lot out here in the tropics, and our Chabad House (which is also our home) flooded twice this past year.

There are also jungle animals in the city. When driving, you sometimes need to wait for monkeys or snakes to cross the road; our previous Chabad House had jungle bats in the roof.

You hear the Amazon sounds as well. There are lizards that make terrible screeching sounds at night, and the acai tree in front of our Chabad House attracts all kinds of chirpy parrots. It’s cute for tourists, but a nuisance that we locals just get used to.

Being so distant makes our community very close-knit. People are here for the long-term; they value friendships and companionship.

Q: How does the isolation affect things?

A: For the most part, it means that you sometimes need to learn patience. If, for example, your air-conditioner breaks, you may need to wait a few days for a spare part to be shipped (literally) from Belem or flown in from São Paulo.

The lack of parts may also be the reason we have frequent power outages. When that happens, we have to check into a hotel for the night since it is nearly impossible to sleep without air-conditioning.

At the same time, being so distant makes our community very close-knit. People are here for the long-term, and they value friendships and companionship.

It also means that we need to be everything for everyone all the time.

For example, there was someone hiking through the Amazon to raise money and awareness for cancer. He contracted malaria and then got arrested on the Amazon border with Colombia, where he was in dire need of help. His family reached out to us since we are the only Jewish resource for miles around.

A visitor from Israel recently got into a car accident in Alter do Chão, which is more than an hour flight from here. The only Jewish person in the region happens to be an orthopedic surgeon, and we were able to connect them. 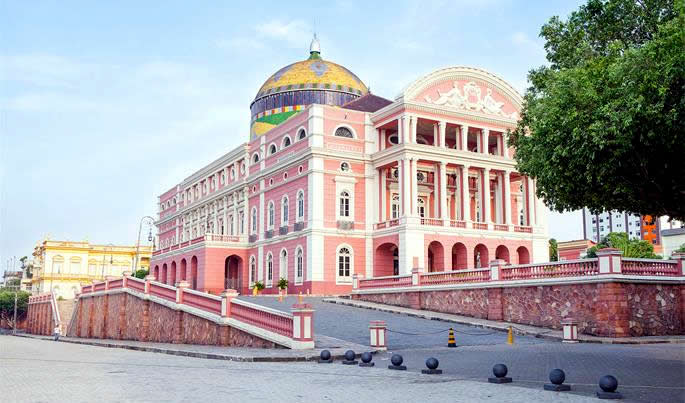 The rabbi greets Jewish tourists at the Amazon Theater, one of the city’s most impressive landmarks. Photo by Karine Hermes/Chabad.org/News.

Q: What is the history of Jews in Manaus?

A: Jewish history begins here with the 19th-century rubber boom, when the city bloomed quickly, as did business all along the Amazon. The opportunities attracted Jewish explorers and entrepreneurs, especially from Morocco.

In 1910, Rabbi Shalom Muyal of Morocco, who had traveled up the Amazon to foster Jewish observance and perform circumcisions among the settlers, passed away from yellow fever and is buried in the Manaus municipal cemetery. He has come to be regarded as a saint by many in the local non-Jewish population, who make regular pilgrimages to his gravesite.

His great-granddaughter, who now lives in France, recently came to visit. She shared that Rabbi Muyal had left behind a pregnant wife and three children when he came here on what he thought would be a temporary trip. His wife didn’t even find out that he had died until eight years after his passing.

For 99 years between his death and our arrival, there had never been a rabbi living here. My wife is the first rebbetzin to ever live here. 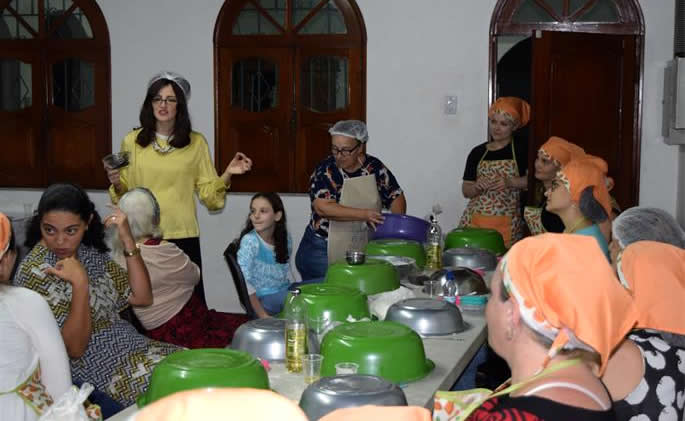 A: The community here is small, maybe 500 Jewish people in total. Many are the descendants of the original Moroccan traders, but we also have others who came here for business opportunities or environmental purposes.

My wife grew up in Belem, where her parents direct the local Chabad center, so the mentality and customs are familiar to her. People are friendly here, so it did not take me long to become acclimated to the community as well.

When we arrived, there were three families who kept kosher. Ten years later, there are 14 households who buy kosher meat and other supplies from the store we run out of our Chabad House. There are weekly classes for children and adults, and different themed and holiday activities throughout the year. There are also 15 men who bought their own tefillin and put them on every morning, which is amazing. Before we came, not one woman used the mikvah. Today, there are five.

When driving, you sometimes need to wait for monkeys or snakes to cross the road.

Q: Is there a mikvah in the Chabad House? Can they just use the Amazon river?

A: We do not yet have a mikvah, which is obviously a challenge. The Amazon is not an option either. It’s muddy and polluted, and not safe for swimming. It’s also not halachically ideal because it is fed largely by rainwater and would therefore need to be confined to a stagnant pool to be kosher, which it is not.

Until we get funds and a location for a mikvah, the women fly to São Paulo, which is normally the cheapest ticket but takes four hours each way, or to Belem, which is two hours each way.

Q: How about the rainforest? In what ways does that impact Jewish life there?

A: Manaus is deeply connected to the river and the rainforest on many levels. On a communal level, this Tu B’Shevat (the “New Year for Trees”), 10 men from our community went out to a tower in middle of the rainforest, where we studied and prayed together as a minyan. There are very few places in the world where you can get that experience. One really feels the beauty and verdant vitality of G‑d’s world.

And, of course, the rainforest attracts many tourists, who we serve in many ways. 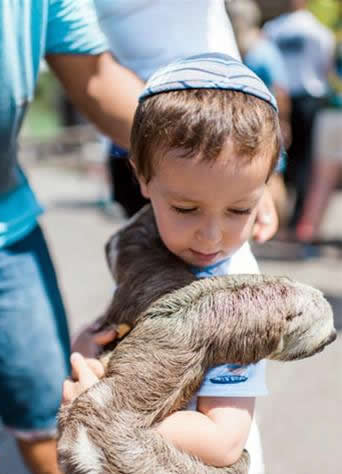 When you live near the jungle, who needs a zoo? Credit: Chabad.org/News.

A: Tourists come here from all over the world, to hike in the rainforest, swim with the pink dolphins, meet the monkeys, and all that. We provide them with prayer services, kosher food and whatever else they may need.

There are 20 cruises that come through every year during the rainy season, when the river is deep enough for the ships to pass safely.

We greet Jewish tourists at the famous Amazon Theater, which was built with imported materials in 1896 during the rubber boom, and is considered one of the city’s most impressive landmarks. One year, we lit a giant Chanukah menorah there. Some tourists are surprised to see us, but others looked us up online and expect Chabad to be there for them, no matter where in the world. 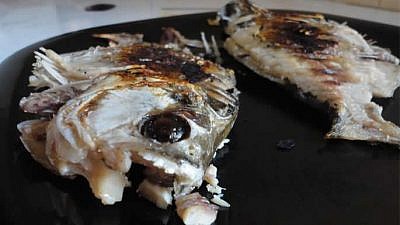 Q: How hard it is to get kosher food?

A: For the most part, it takes patience and foresight since everything needs to be shipped down the Amazon from Belem in refrigerated containers. We often find ourselves without kosher milk. I tried a few times to supervise the milking at a local dairy farm and bring home some chalav Yisrael milk, but that proved impractical. The weather is so hot that by the time I brought the milk home and pasteurized it, most of it had spoiled.

When things get tough, we’ve just learned to make do, and do without.

Q: Are there children in the community, and what do you do for them?

A: There are several dozen Jewish children here that we know of, besides our own six kids. During the winter and summer breaks, we hold a day camp for them, where they explore Judaism and have fun in a kosher environment.

On Sundays, the kids gather for learning and an activity. We do a lot of one-on-one tutoring, helping kids learn Hebrew, learn about the holidays and everything to give them a Jewish education.

We take tremendous pride in watching the kids grow in their Judaism, and celebrate bar and bat mitzvah, and other milestones. We recently had the pleasure of officiating at a wedding of a local young man who married a Jewish woman in the United States, and is now involved with Chabad in New York. 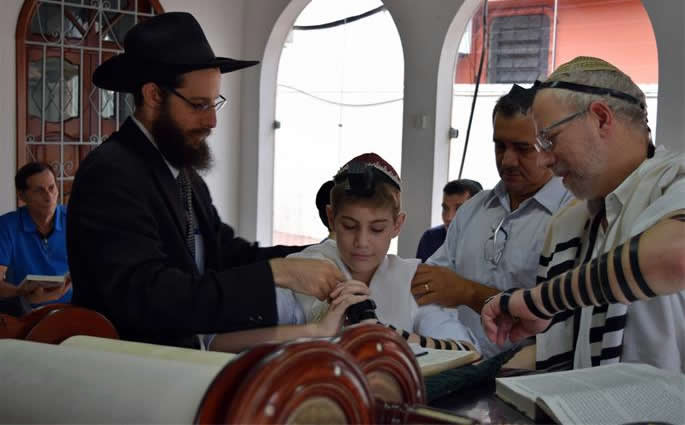 Located at the gateway to the resource-rich rainforest, Manaus has a small, but close-knit Jewish community. Credit: Chabad.org/News.

Q: It sounds like things have really progressed. Is this what you imagined all along?

A: I have family in Brazil, and when I was a teenager my family came to tour Manaus. I really enjoyed the Amazon and wanted to go back, but I never envisioned that I would eventually live here. Back then, I didn’t even know that there were Jews in the Amazon.

When we got married, my wife and I settled in Brooklyn, N.Y., and we considered becoming Chabad emissaries in Manaus. We took a pilot trip in June, and it was really a disheartening experience. Our 2-month-old baby kept on fainting from the heat, and the people we met seemed to be pretty far from Judaism. One elderly man we met told us that he had made the mistake of living a non-Jewish life and implored us to help make sure that the next generation does not make that same mistake. That affected us, but we were not ready to make the commitment.

Then, a few months later, Rabbi Gabi and Rivky Holtzberg were murdered in their Chabad House in Mumbai. We were inspired by their dedication and their willingness to move to the other side of the world for a small, isolated community.

We decided to try Manaus for a year with the understanding that we would leave if we could not hack it out. We came here and have never looked back.

This past Shavuot, our sixth child was born right here in Manaus. This is home for us. The people are our people. Until Moshiach comes, this is our place in the world, and we wouldn’t trade it for anywhere else.

This story originally appeared on Chabad.org/News.