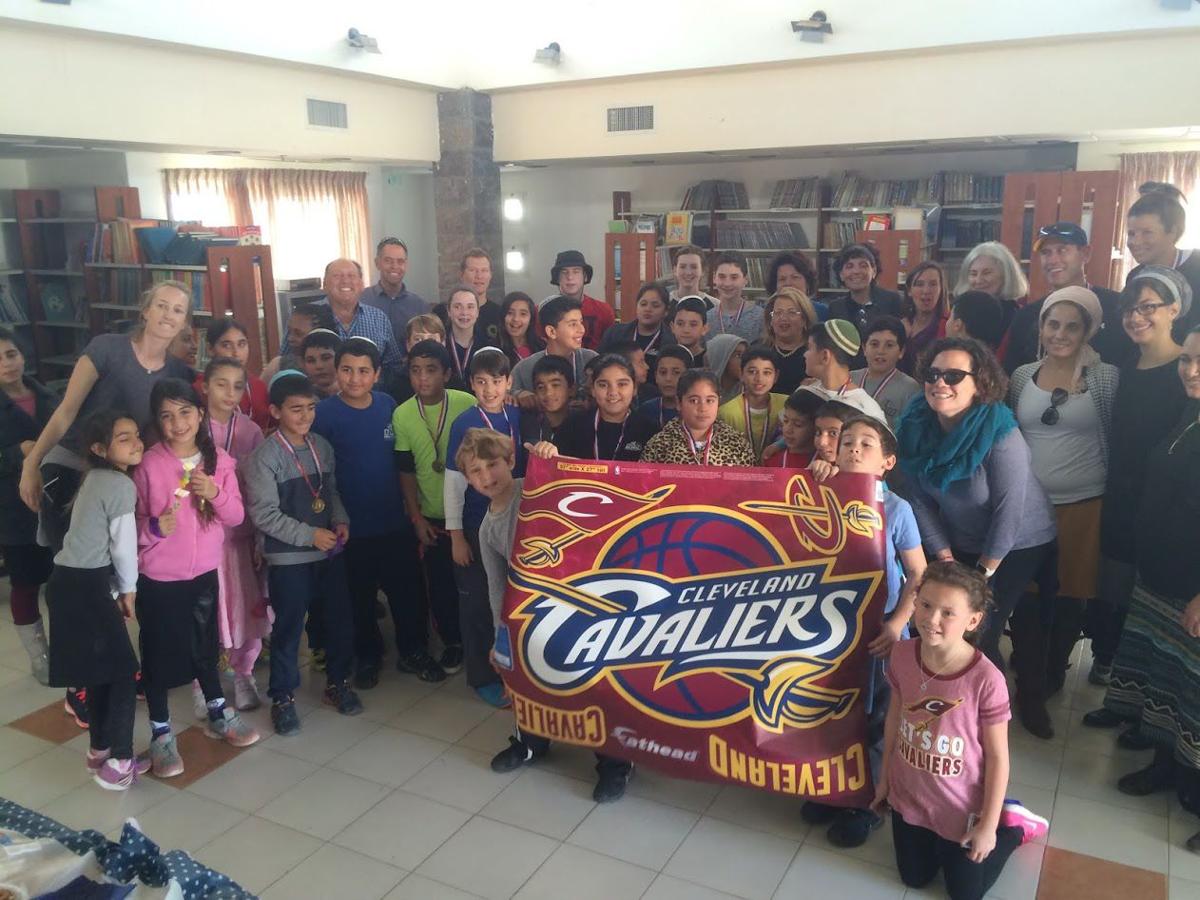 Ethan Holz, in the middle of the back row wearing a gray shirt, joins kids from the Youth Futures program in Beit Shean, Israel, as they display a Cleveland Cavaliers Fathead that Ethan had given them to decorate a room in the Youth Futures center. 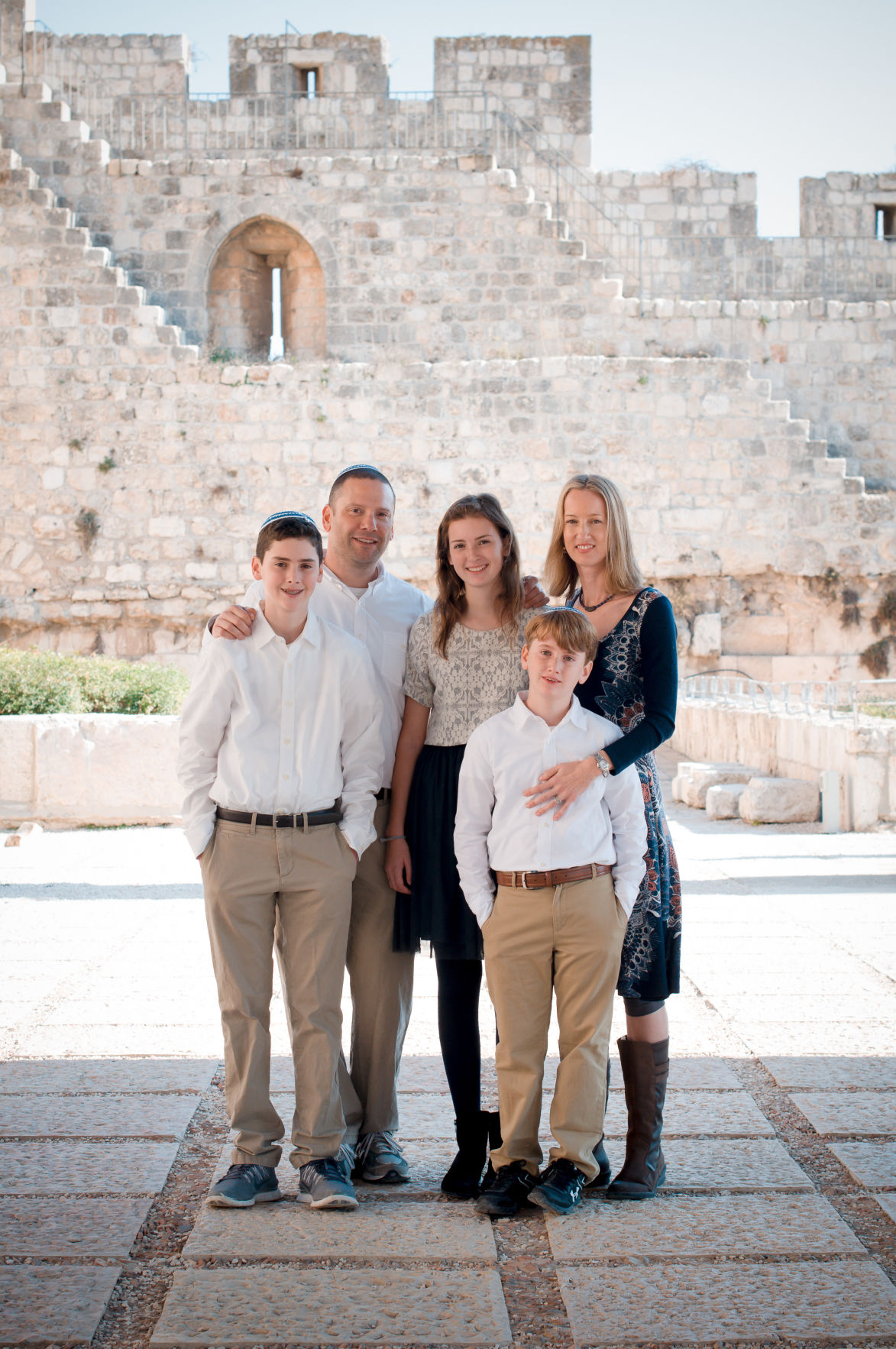 Ethan Holz, far left, celebrated his bar mitzvah at Robinson’s Arch, adjacent to the Western Wall in Jerusalem. Other members of his family, from left, are his father, Mark; his sister, Raya; his brother, Jude; and his mother, Leslie. 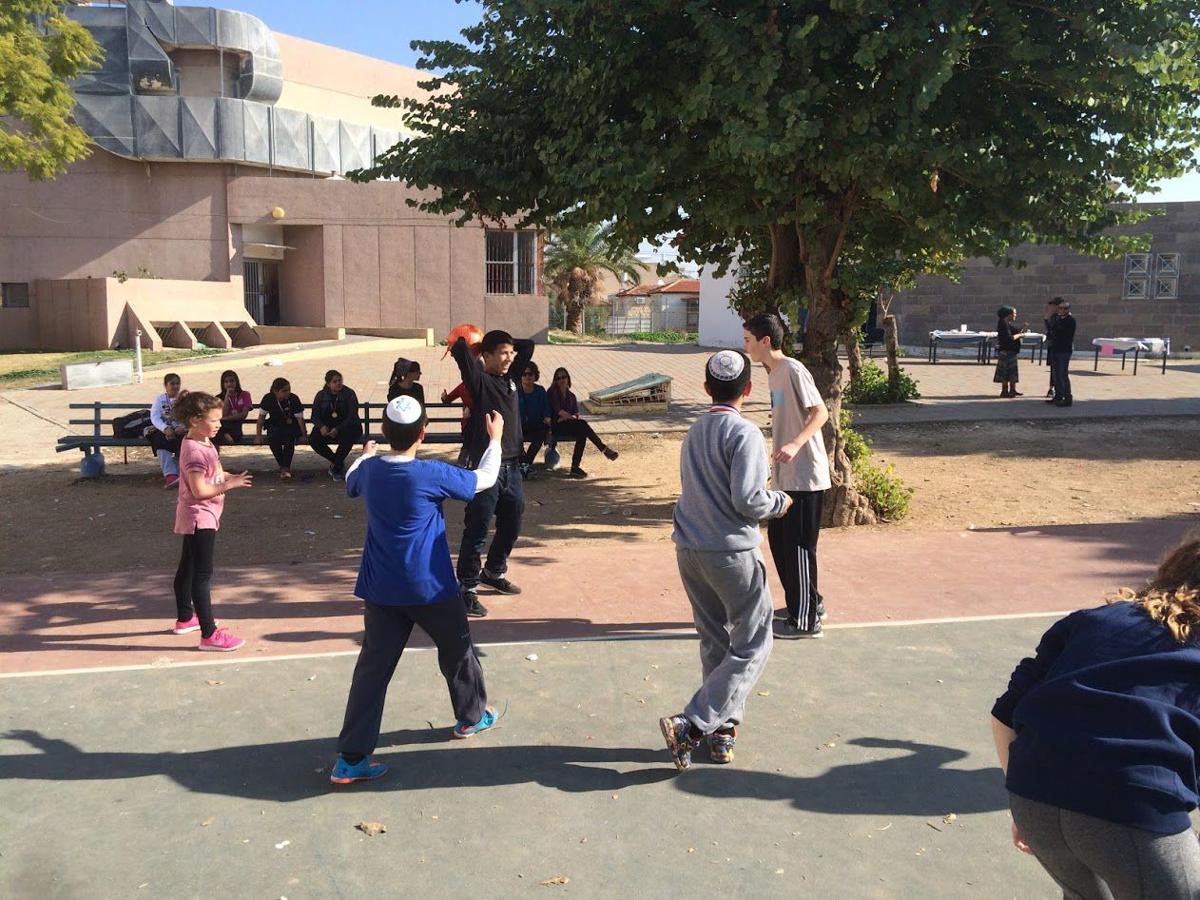 In Beit Shean, Cleveland’s sister city in Israel, there’s a room in a center for a children’s program called Youth Futures, decorated with sports memorabilia from Cleveland professional teams and The Ohio State University.

The children have Ethan Holz to thank for that.

Ethan, 13, of Beachwood is a big fan of the Cleveland teams and Ohio State, and he chose to have the room decorated in this fashion for his bar mitzvah project. He became a bar mitzvah in Jerusalem Dec. 24, and he and his family traveled to Beit Shean the following week to complete his project.

“We wanted to do something kid-related,” says Ethan’s mother, Leslie Holz. “We got help from the (Jewish Federation of Cleveland).”

Julie Jaslow Auerbach, the Federation’s former senior associate in international operations, connected the Holzes with Youth Futures, a Federation-supported program that provides professional mentors for about 200 at-risk Israeli children between ages 6 and 13 each year in Beit Shean and Valley of Springs. It’s a collaborative project of the Jewish Agency for Israel, local authorities and private Israeli donors from the business world.

Youth Futures staff came up with the idea of having Ethan decorate one of its rooms in Beit Shean with Cleveland sports gear. So in September, Ethan started sending letters to the Cleveland Indians, Browns and Cavaliers – and some players on those teams – and Ohio State to request that they donate items for his project. He sent a total of about 20 letters.

“My goal is to decorate a room for these kids to give them a fun place to hang out,” Ethan wrote in one of his letters. “I am collecting Fatheads, posters, banners and pictures of athletes to decorate the kids’ hangout room at the Youth Futures center. It would be a good deed if you would help me by donating some items that I can deliver during my bar mitzvah trip in December.”

Slowly but surely, the items started coming to Ethan’s home.

“It was very successful because of all the people who actually wrote back and gave items,” Ethan says.

Leslie adds, “The response was much better than we ever anticipated. It would have been cool if more players had responded, but we were happy with what we got.”

Ethan also sent letters to all family members who were going with him on the trip to Israel, asking for financial donations. With that money, the Holzes went to Dick’s Sporting Goods and purchased other items to take to Beit Shean.

“We bought stuff for the Youth Futures kids, like mini basketballs and mini footballs,” Leslie says. “These were for the kids to have, not to decorate the room. Ethan also put in some of his own money.”

In November, Ethan, his mother, and his father, Mark Holz, had an opportunity to meet a delegation of Youth Futures staff members when they came to Cleveland for a meeting.

“We got to meet them face to face and really explain what we were doing, and they were thrilled,” Leslie says. “They were going to do some fun things while they were here, like go to a Cavs game.”

The Holzes, members of Park Synagogue in Cleveland Heights and Pepper Pike, arrived in Beit Shean Dec. 28 and were all set to decorate the room. But unfortunately, it had been vandalized the night before, so the decoration had to be postponed until after the Holzes left.

“So we left all the stuff, and they said once the room was cleaned up, they were going to take the kids in and decorate it,” Leslie says. “But that’s OK; it still worked out with what we did.”

While in Beit Shean, the Holzes spent a couple of hours with the Youth Futures children playing soccer and other games.

“They set up a bunch of different stations, and you would just go from station to station,” Leslie says. “There were little races, a little scavenger hunt and basketball. There were no winners or losers. Everyone got a medal, and everyone had fun. Then we played a big soccer game at the end and said our goodbyes.

“The kids had a great time; they were all smiles and so friendly, giving us hugs. It meant a lot to them. They know that Cleveland’s their sister city and that we came from Cleveland to see them.”

Ethan says seeing the happy faces of the Youth Futures children that day was the highlight of his mitzvah project.

“It turned out to be really good at the end,” he says. “They really appreciated everything we brought.”

Leslie says she’s proud of Ethan – a seventh-grader at Beachwood Middle School, where he plays basketball – because of the way he took charge of the project.

“He wrote all the letters himself and addressed them,” she says. “It was his effort, and I was so excited for him when the first package arrived because, to be honest, I was a little nervous that these organizations must get a ton of letters from people all over. So I was really worried if anyone was going to respond. But once I saw they were responding, I was really happy for him.”

“Every single day that the Youth Futures kids see the decorations in their room, it reminds them that there are people halfway across the world who care about them and believe in them and want them to succeed,” Kalir says. “Ethan helped us remind these children of that, and that is an enormously powerful and meaningful message. We want to thank Ethan and his family for this very meaningful contribution.”

Kalir says when her department was approached with the idea to do a bar mitzvah project in Israel, “we knew right away we wanted it to be in Beit Shean.”

“Every day, we work to make Beit Shean a better place and establish meaningful personal connections between our two communities,” she says. “Whether it’s through volunteer opportunities, missions to Beit Shean or family experiences like the one we helped the Holz family arrange, we’re helping build relationships and strengthen the community.”

Ethan’s bar mitzvah took place at Robinson’s Arch, adjacent to the Western Wall in Jerusalem. A group of 24 attended.

“It was very intimate,” Leslie says. “There were other bar mitzvahs going on all around us, but you’re in your own little nook. It was very inclusive; everyone who was there with us had a part.”

A special part of the ceremony, Leslie says, came when Ethan’s grandparents – Hy and Heddy Holz of Orange and Lynne Richter of Sherman Oaks, Calif. – passed a Torah to Ethan’s parents and then to Ethan.

“We passed it from generation to generation,” Leslie says.

Although this was the first trip to Israel for Ethan and his siblings – Raya, 15, and Jude, 10 – Mark Holz lived in Tel Aviv for two years, and Leslie had visited the Jewish state twice before. Mark and Leslie suggested to Ethan to have his bar mitzvah in Israel.

“Ethan’s not one to be the center of attention,” Leslie says. “He didn’t want the standard service with a ton of people and a big party after; that’s just not the kind of kid he is.

“Mark and I thought it would just be really meaningful to do it in Israel. Once we started showing him YouTube videos of Israel and what it was about, and that we were going to do all these really cool things, he was really excited about it.”

Leslie says the trip was so wonderful, the family plans to return in 2018 for Jude’s bar mitzvah.

“I encourage other Cleveland families that are thinking about taking a family trip to Israel to go to Beit Shean, because it’s a cool thing to do,” she says.

Kalir says anyone interested in doing a b’nai mitzvah project similar to Ethan’s, or in traveling to Beit Shean or learning more about Youth Futures or other programs in Israel supported by the Federation, should contact overseas@jcfcleve.org.

This article appeared in the Spring 2016 issue of Bar•Bat Mitzvah.