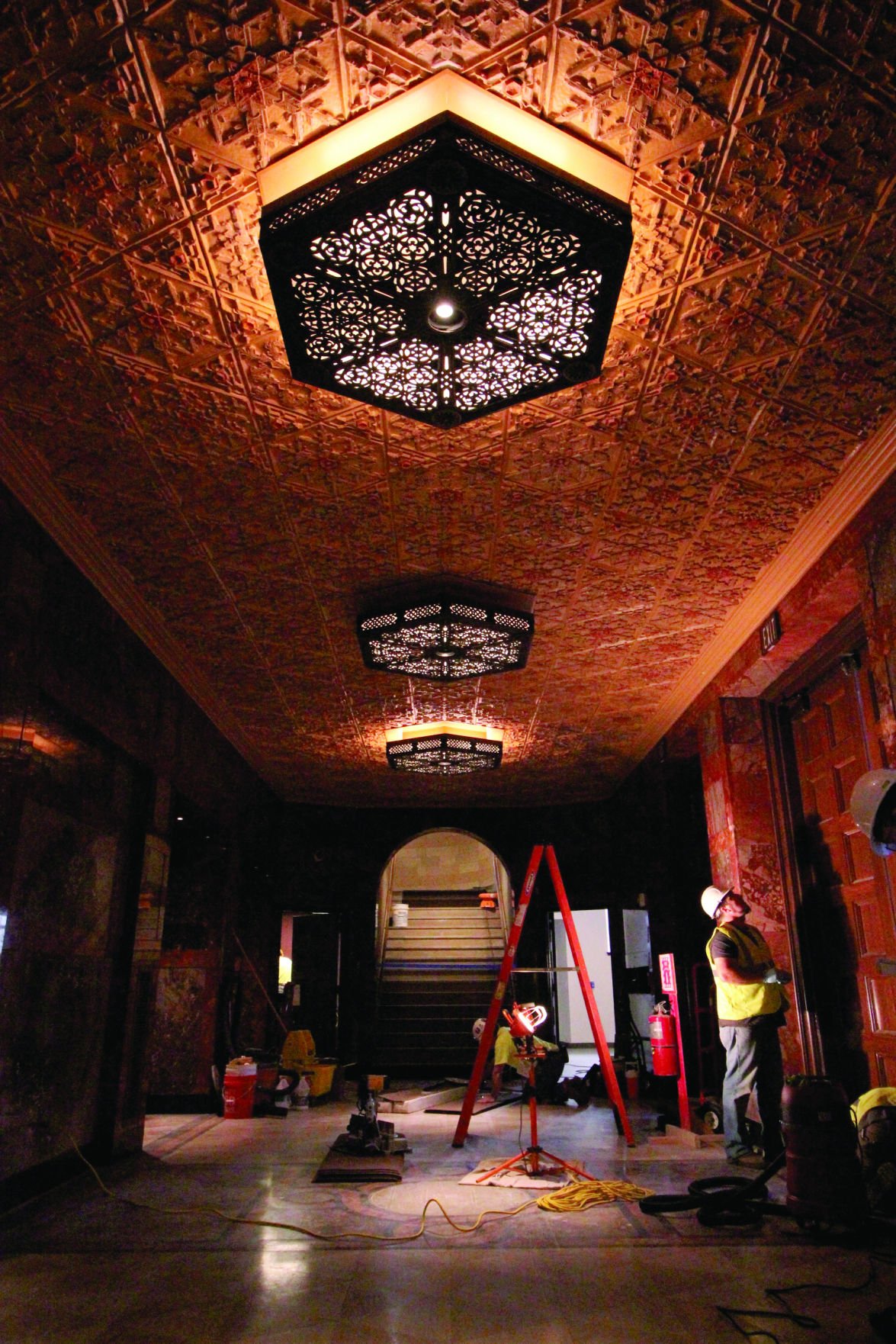 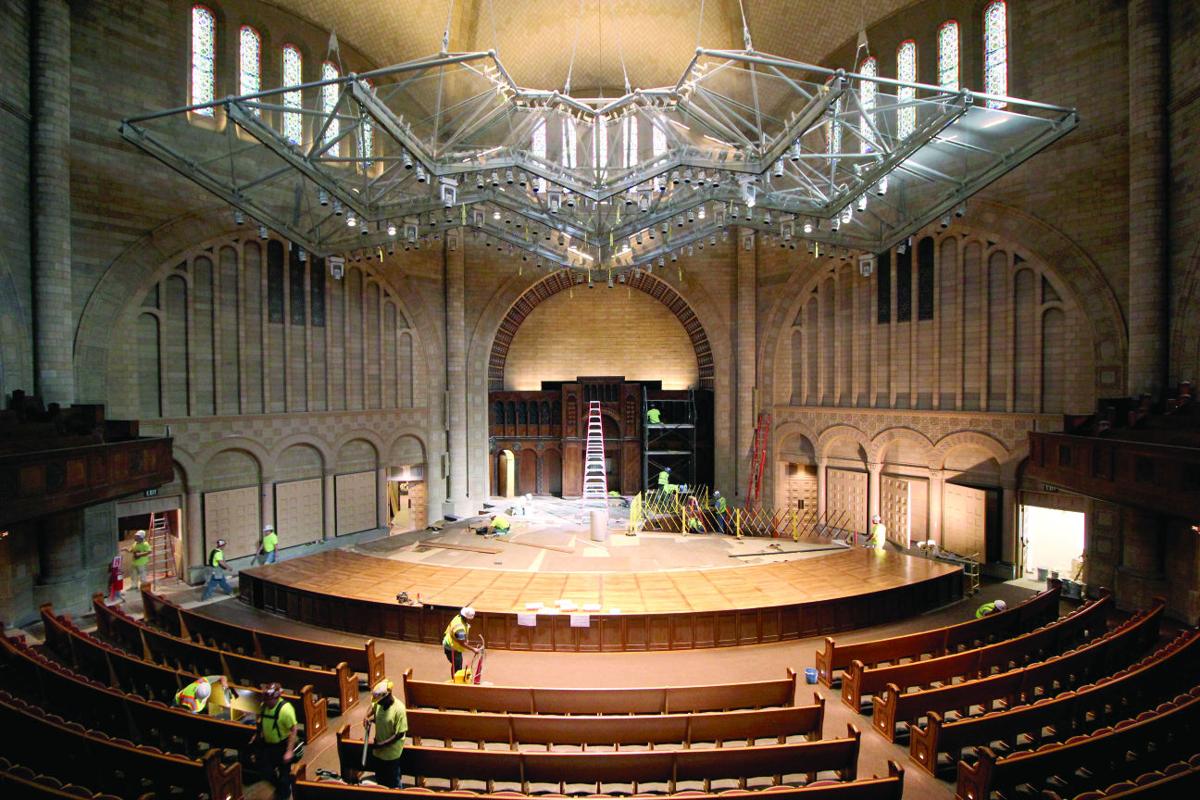 A large acoustic canopy hovers over the renovated stage of Silver Hall, the heart of the Milton and Tamar Maltz Performing Arts Center at Case Western Reserve University in Cleveland. 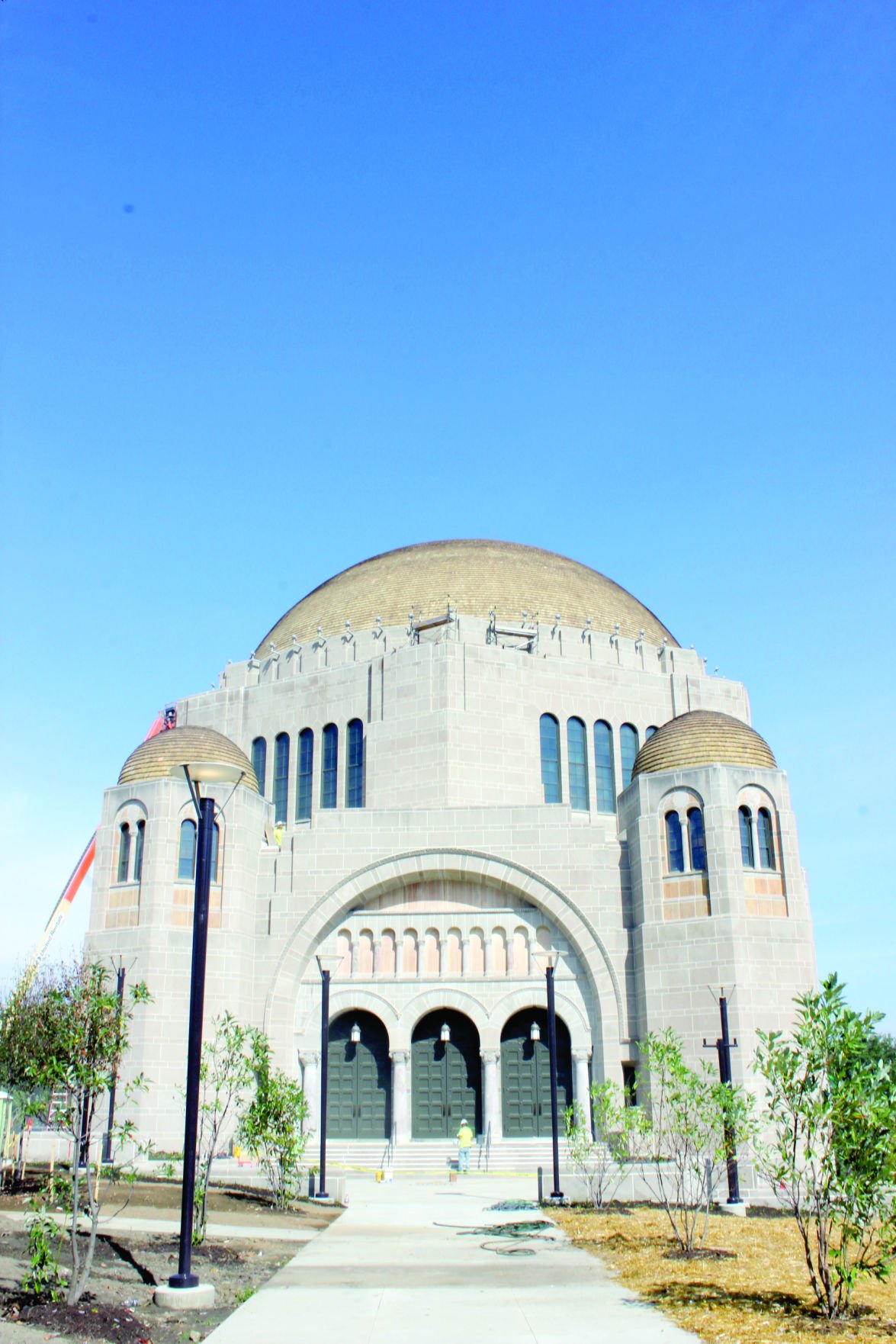 A large acoustic canopy hovers over the renovated stage of Silver Hall, the heart of the Milton and Tamar Maltz Performing Arts Center at Case Western Reserve University in Cleveland.

Nameplates are being affixed, workmen are applying clear-coat sealant to the acoustic tiles to ensure appropriate sound reflectivity, the new terrazzo marble floors are being buffed yet again, and dust is everywhere.

All will be gleaming Sept. 27 when the Milton and Tamar Maltz Performing Arts Center, a profound repurposing of The Temple-Tifereth Israel at East 105th Street and Ansel Road on the Case Western Reserve University campus in Cleveland, opens its 500-pound, white oak doors.

At 3 that afternoon, all 1,200 seats of The Temple’s Silver Hall will be occupied for a special concert signaling the launch of “Violins of Hope,” a multimedia, multi-institution project designed to raise awareness of violins that are, in effect, Holocaust survivors.

That Sunday performance is sure to be a fitting introduction both to Violins of Hope and to the building known as The Temple.

It’s been five years since Cleveland-area philanthropists Milton and Tamar Maltz jump-started the radical reimagining of the striking structure.

In 2010, the Milton and Tamar Maltz Family Foundation committed $12 million to transforming the 1924 landmark from a building dedicated to religion to one focused on the arts – and to raising the cultural profile of CWRU. Four years later, the Maltzes raised their commitment to $30 million in a combination of foundation and family funds.

As Lara Kalafatis, vice president for university relations and development at CWRU, said during a hardhat tour of the gold-domed Temple on Sept. 18, the first task in the makeover was “raising money and awareness about the importance of performing arts to Case Western Reserve University.

“Most people know us as a science and engineering university and research institution, which we are,” she said, “but some people don’t know the importance and relevance and the quality of our theater, dance and music programs. We really needed to give them a beautiful place to perform, to act and to play.”

The two-phase project – including phase two, which won’t begin until all the money is raised and would include a black-box theater, performance theater and performance spaces – has been estimated to cost $64 million. But the cost of phase two is still being determined, according to a CWRU spokesman.

That has bought impressive improvements to the building, a blend of Byzantine and Romanesque motifs that was home to Rabbi Abba Hillel Silver, the noted Zionist and storied orator memorialized in Silver Hall, the space at the core of Boston architect Charles Greco’s singular construction. Silver’s son, Rabbi Daniel Jeremy Silver, succeeded him following the senior Silver’s death in 1963, serving as The Temple’s senior rabbi until he passed in 1989.

While its main focus will be CWRU’s performing arts, The Temple, in effect a stalking horse for CWRU’s expansion to its west campus, will continue to be used for High Holy Days and major events, as has been the case for years.

Demolition work began on The Temple-Tifereth Israel at Case in fall 2014, according to Jack Kellogg, project manager for general contractor Turner Construction Co. Some 40 subcontractors have been involved.

According to Kellogg, the key challenges were reconfiguring Silver Hall for flexible staging, which now allows performances and concerts of various sizes, and installation of an acoustic canopy evoking a giant winged creature, part-origami, part-pterodactyl.

That canopy consists of 54 pieces of glass, each weighing 500 to 600 pounds. Six cables hung from the 88-foot-high ceiling trusses support it.

The building has been brought up to code, the number of bathrooms has been doubled, control rooms for sound and lighting have replaced coat rooms in the south lobby, and all but the balcony has been made Americans with Disabilities Act-accessible, Kellogg said.

For the first time, there will be bathrooms on the balcony level. They replace storage spaces.

In addition, while the original aisle and intermediate standards in the Silver Hall seating have been preserved, the seats themselves are wider, which necessitated a reconfiguring of the under-floor HVAC.

The overriding idea was to honor the original building, which Kellogg said was constructed with singular, inimitable quality, while bringing it up to code and making it suitable for contemporary use. Staying faithful to its character in finish and texture was key, too.

“All the really hard work is buried,” he added, referring primarily to the reconfiguring of the staging, which required an excavation 26 feet deep. That particular project occupied six weeks in March and April, requiring sophisticated engineering to deal with ground water flow.

While the underground work is impressive but largely invisible, the above-ground efforts shine – literally. Take the stained glass windows on each side of the seven-sided Silver Hall. Not only have they been cleaned up, they’ve been hinged so they can alternate with eight hinged lighting stations, allowing visual flexibility to complement the sonic variance the Akoustolith acoustical tiles and sonic wall panels afford.

Finishes, too, were key both in Silver Hall and in the adjacent, refurbished corridor, now available for receptions and performances. All the acoustical tile, for example, has been painted to look like plaster.

The concepts central to the renovation of The Temple-Tifereth Israel in Cleveland are secularization, accessibility, multipurpose use, and meeting contemporary standards.

In its high-end capabilities, its capacity to mount all kinds of performances from intimate lifecycle events to orchestral extravaganzas, and new creature comforts recognizing that people are bigger than they used to be, the Temple blends the old and the new in singular, dedicated timelessness.

WHAT: Opening of the Milton and Tamar Maltz Performing Arts Center

WHO: Conductor Franz Welser-Moest will lead the Cleveland Orchestra in a special concert signaling the launch of “Violins of Hope”