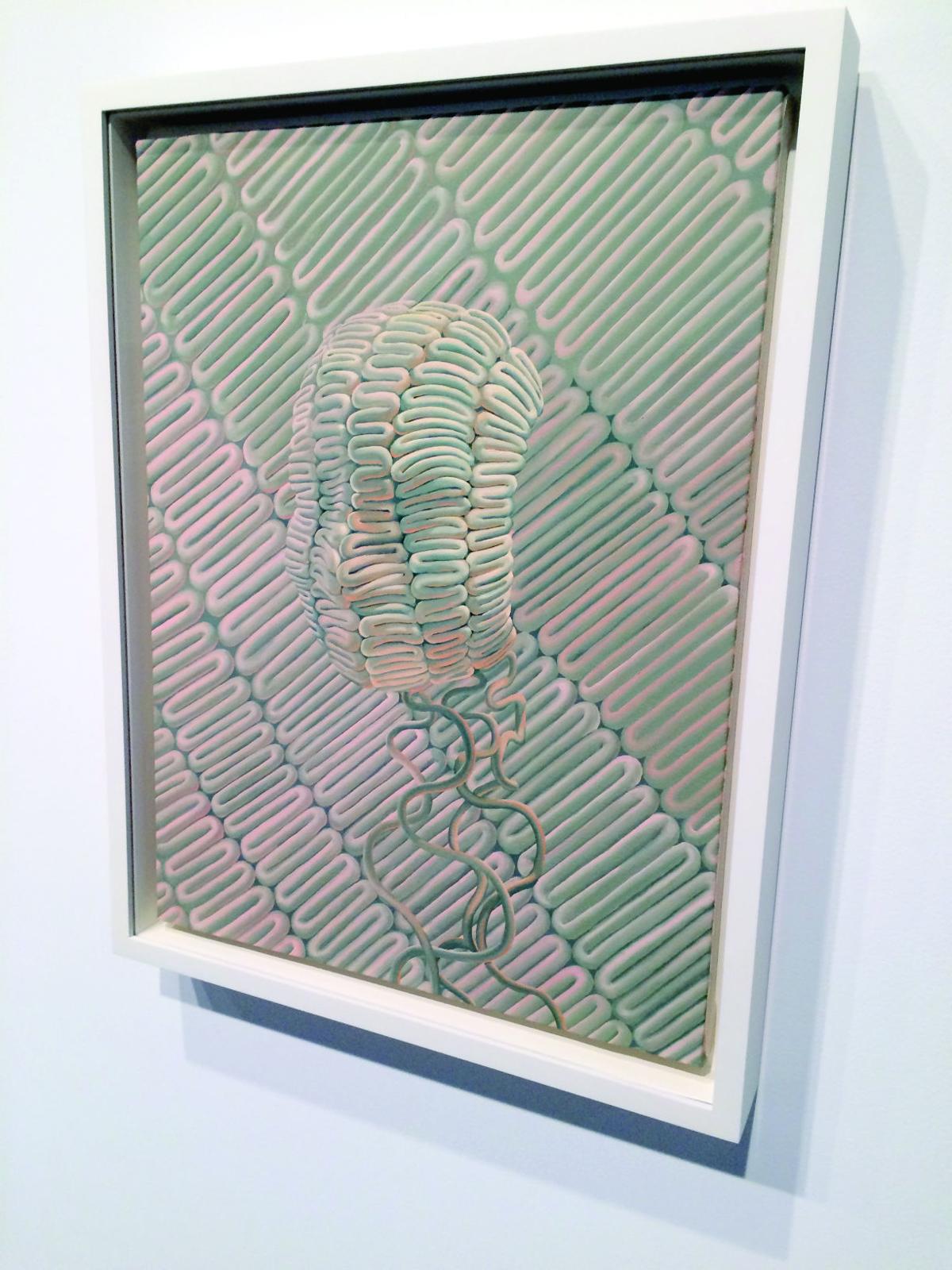 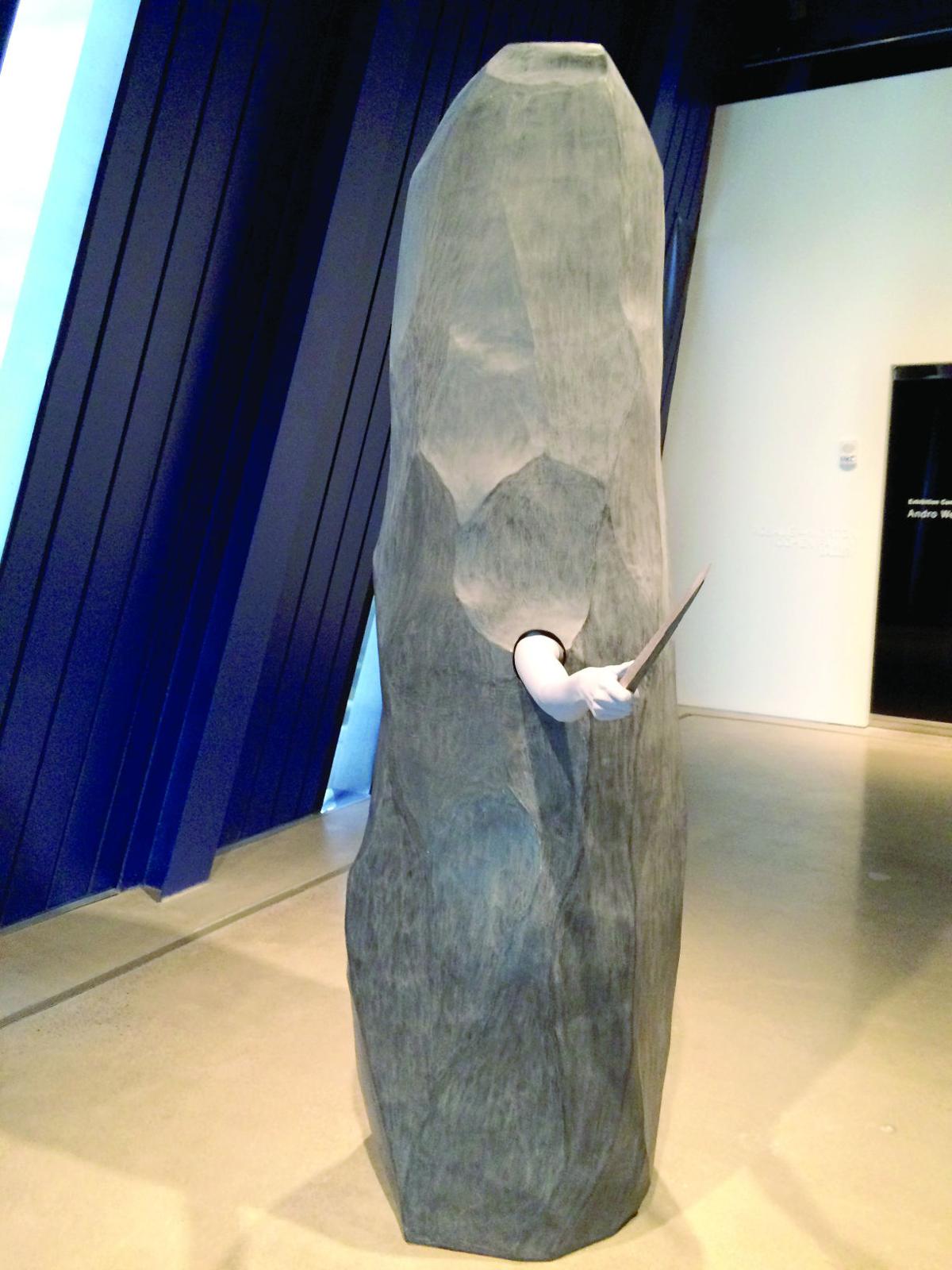 “Stranger” is the apt title of the intellectually nutritious winter/spring exhibition at the Museum of Contemporary Art Cleveland. The decidedly mixed-media, decidedly international effort features nine artists working in various dimensions but with a common theme: the human figure.

The nine are Huma Bhabha, a Pakistani native living in Poughkeepsie, N.Y., who blends the human and the animal; Valerie Blass of Montreal, whose work is surreal and psychological; Sascha Braunig, a native of British Columbia who lives in Portland, Maine; Antoine Catala, a native of Toulouse, France, living in New York; Los Angeles native/New Yorker Ian Cheng; Simon Dybbroe Moeller, a Dane living in New York; Cleveland native/London-Berlin resident Cecile B. Evans, whose interactive video, “Hyperlinks or It Didn’t Happen,” vamps on iconic dead actor Philip Seymour Hoffman; Georgia native/Zurich-Berlin resident Andro Wekua; and Lynette Yiadom-Boakye of London. Each has a distinct and original vision of the world.

Also on this season’s MOCA Cle menu: “abduct,” a 12-minute video by Los Angeles artist Xavier Cha. Where “Stranger” focuses on the body, “abduct” is about expression. There are intersections.

One can lose oneself in either “Stranger,” which occupies the white-walled Mueller Family Gallery on the top floor, or in “abduct,” mounted widescreen in a theater in the black-walled Toby Devan Lewis Gallery on the second floor.

One can lose oneself in both. Be ready to spend several hours – maybe even several visits – at MOCA Cle.

These exhibitions, organized by associate curator Rose Bouthillier, are thoughtful, careful and mind-bending. They are the Alberta native’s last for MOCA Cle; Bouthillier is returning to Canada to be exhibitions curator at Remai Modern in Saskatoon, Saskatchewan. She will be missed.

“The works were chosen based on the intense feeling that emerges when you ‘meet’ an artwork,” Bouthillier said in a media briefing before the show opened at the end of January. While the art allows the viewer to project, it’s also assertive.

Not that the body is all that recognizable in “Stranger,” a term presented without context so it ripples into numerous meanings.

Sometimes that body is sheathed, as in “Ce Nobostant,” Blass’s totem/obelisk, a towering figure you want to hug – but with that weird extension, maybe not. Made of Styrofoam, foam coat, Mastic Magic Sculpt epoxy, plastic, wood, stick and oil paint, it draws one in with its cuddly abstraction, then repels with its knife. Or is that a scalpel?

Sometimes the figure is plush, as in Catala’s “Distant Feel,” a weirdly impassive triptych of a man communing with his smartphone, a man about to cry and a woman holding a child. These large works are upholstered, as much sculpture as photography. And while the Catalas draw you in, they also keep you at bay no matter how much you want to touch them.

If the figure is the key theme of “Stranger,” subthemes include duality and empathy. Braunig, for example, crafts haunting paintings of faces or things about to break through. The louvered “Chur,” which conjures a brain in a chemistry lab jar, is so lovingly detailed, so warmly contextualized and so three-dimensional it’s more human than clinical. Other Braunig paintings, suggesting faces peeking through curtains, speak to yearning and revelation. They’re wonderfully mysterious.

So are Yiadom-Boakye’s portraits, like “A Pedigree of Some Note,” a large oil of a boy casually sitting on the floor, eyes wide open. Again, duality: this is both inviting and off-putting. While the boy seems relaxed, the way he watches you – this Londoner’s paintings always watch you – is disquieting. Neither of you can take your eyes off the other when it comes to Yiadom-Boakye’s contextless paintings, which startle with their blend of sophistication and guilelessness.

The embarrassment of riches that is “Stranger” also features Wekua, whose sculpture and video combine the heraldic with the cybernetic; Cheng’s artificial intelligence- and videogame-based video, “Something Thinking of You” (do not miss this philosophical blockbuster); and “Untitled (How does it feel),” Dybbroe Moeller’s eerie cybernautical video about consumerism and style.

And there’s “abduct,” Cha’s meditation on expression. Commissioned by MOCA Cle in collaboration with Frieze Films, “abduct,” like several other works here, brings the otherworldly down to earth. It tracks actors overcome by emotion, using the close-up to effectively get inside their heads (and ours). As they cycle through anger, joy, sorrow, delight, disgust and fear, they express what all of us feel. They also resist the takeover.

These people – men and women, black and white, dressed artlessly and defensively – morph before our eyes, never settling down to any one emotion, let alone to composure. Perhaps their very restlessness is another of this show’s themes. Here, such restlessness can be disturbing, but it makes for art of a high order.