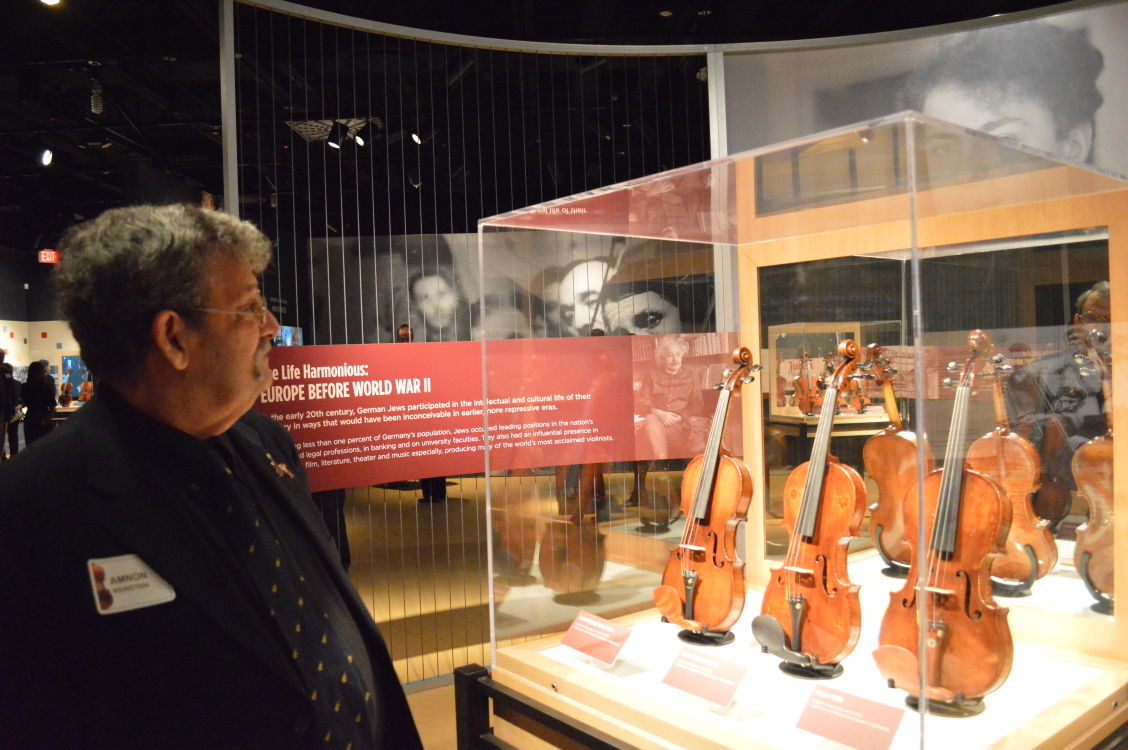 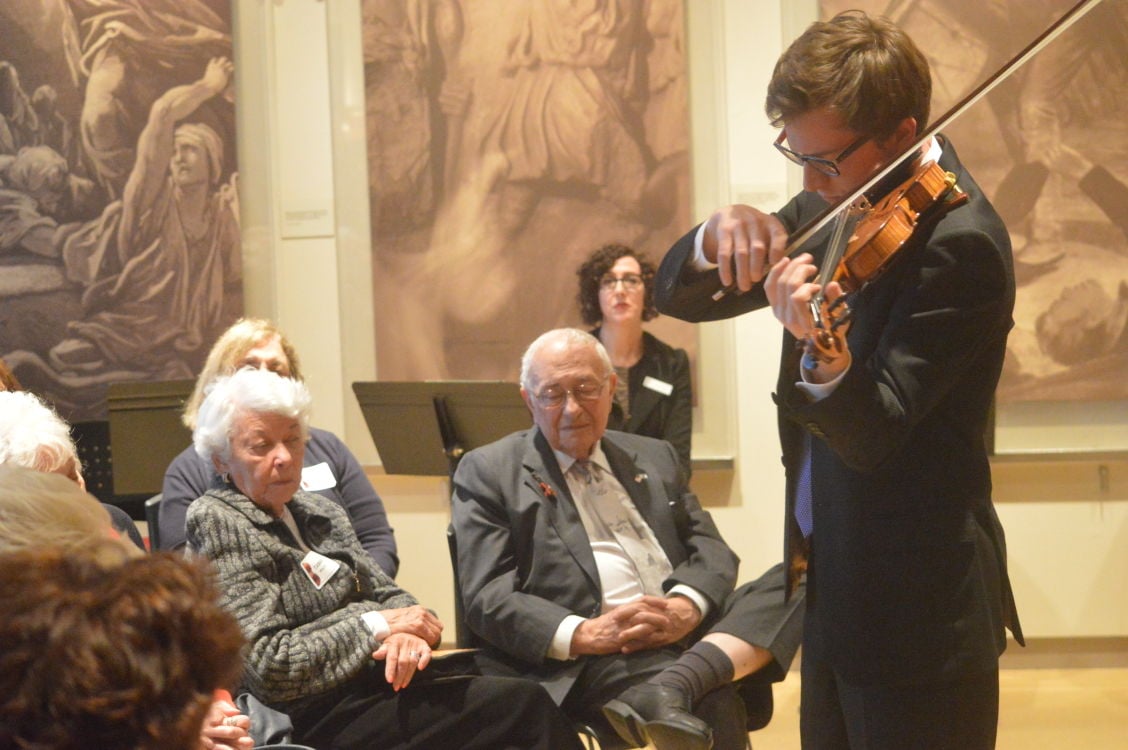 Jimmy Thompson of the Cleveland Institute of Music performs on a Violin of Hope as Tamar, from left, and Milton Maltz listens during the opening reception for “Violins of Hope.” That’s Maltz Museum executive director Ellen Rudolph in the background.

Jimmy Thompson of the Cleveland Institute of Music performs on a Violin of Hope as Tamar, from left, and Milton Maltz listens during the opening reception for “Violins of Hope.” That’s Maltz Museum executive director Ellen Rudolph in the background.

One of the first things you notice, other than Amnon Weinstein addressing you in a video, is the openness of “Visions of Hope,” the new exhibit at the Maltz Museum of Jewish Heritage in Beachwood.

There are no partitions here; walls, yes, but no barriers, and virtually no corners to turn.

Instead, the museum has arranged these exceptional instruments stage front, as it were, occupying glass cases to throw the time, love and work Weinstein poured into them into high relief. They sit at the front of semicircular displays, supporting text and video in the background.

Weinstein is the Tel Aviv violinmaker who launched Violins of Hope more than two decades ago in memory of 400 of his relatives who died in the Holocaust. He and his son, Avshalom, have amassed 60 of these instruments, all somehow related to the Holocaust. Each has its own story; each resonates anew because father and son have brought them back to life.

The exhibit, assembled from scratch, was more than a year in the making, according to Ellen Rudolph, Maltz Museum executive director.

“We selected the violins that had the most stories behind them,” she said Oct. 1. The aim of highlighting the violins, along with the historical text and video displays that line the walls in an installation long on round shapes, was to show the “arc of the Holocaust” and to demonstrate the complex roles these workaday instruments played in the Nazi concentration camps.

Some figured in clandestine orchestras, others in show orchestras, yet others as accompaniment to death marches. Some played a dual role, like Motele Schlein’s.

His enjoys special prominence because in 1943, Schlein infiltrated a Nazi soldiers club and he was hired to entertain during meals. He’d leave the fiddle in the club overnight, going home with an empty case. The next day, he’d return with the case, now packed with explosives. He eventually had enough destructive material stored at the club to blow it up when a group of high-ranking Nazi officers arrived for a visit.

In an Oct. 1 interview, Amnon and Avshalom Weinstein explained that they’ve amassed 60 of these violins and have no idea how many there are. There are 19 at the Maltz Museum, including one that made it to Israel in 1936 for the Palestine Orchestra, which eventually became the Israel Philharmonic. Eighteen come from Weinstein’s collection, one from Yad Vashem.

“In some cases, we know everything about the violin and its provenance,” said the senior Weinstein. In other cases, all they know is that the violin was in the Holocaust. And some are so deeply separated from their origins there’s no way to track their history, his son said.

These are mostly German-made.

James. A Grymes, chairman of the department of music at the University of North Carolina in Charlotte, curated the Maltz Museum exhibit and is the author of “Violins of Hope,” a book published in 2014. Like the Weinsteins, he was on hand Oct. 1 and 2 during opening ceremonies for the Maltz Museum exhibit. His book tells the wildly different stories of seven violins.

Grymes became interested in the project at UNC, which staged a far smaller version of Violins of Hope in 2012. “I think it was a very important first step,” he said of the Charlotte installation. “I think it’s very clear that’s what happening is building on top of what we did in Charlotte collectively.

“When we did it in Charlotte, Amnon probably had 40 some violins. Now he’s closing on 60. As more people learn about the project, especially in America – there are so many families that came over – there have to be more violins and more stories.”

The Maltz exhibit is the second expression of Violins of Hope, a multicultural, multi-institutional project that will run at least until spring. Besides the Maltz Museum, it involves Case Western Reserve University; the Cleveland Orchestra; ideastream (WVIZ/PBS and WCLV-FM 104.9); the Cleveland Institute of Music and the Jewish Federation of Cleveland.

The project’s debut event was a Sept. 27 Cleveland Orchestra concert featuring Israeli virtuoso Shlomo Mintz on a Violin of Hope, in Silver Hall in the new Milton and Tamar Maltz Performing Arts Center on the CWRU campus. The violin Mintz played is now at the Maltz Museum.

Musing on the diverse stories he tells in his “Violins of Hope” book, Grymes said they’re a “poignant reminder that the Holocaust is not one story of 6 million deaths.”

WHAT: “Violins of Hope”