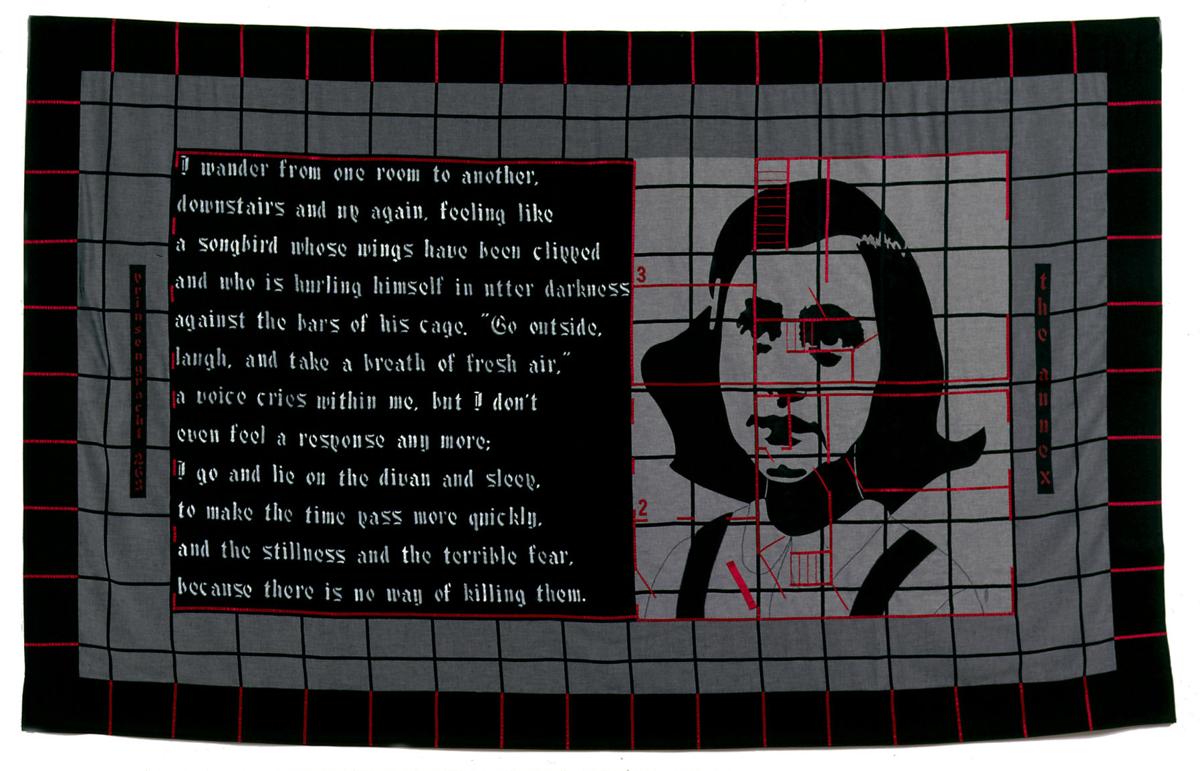 ‘Anne Frank’s Hiding Place’ is a map from the Liberman wall hangings. 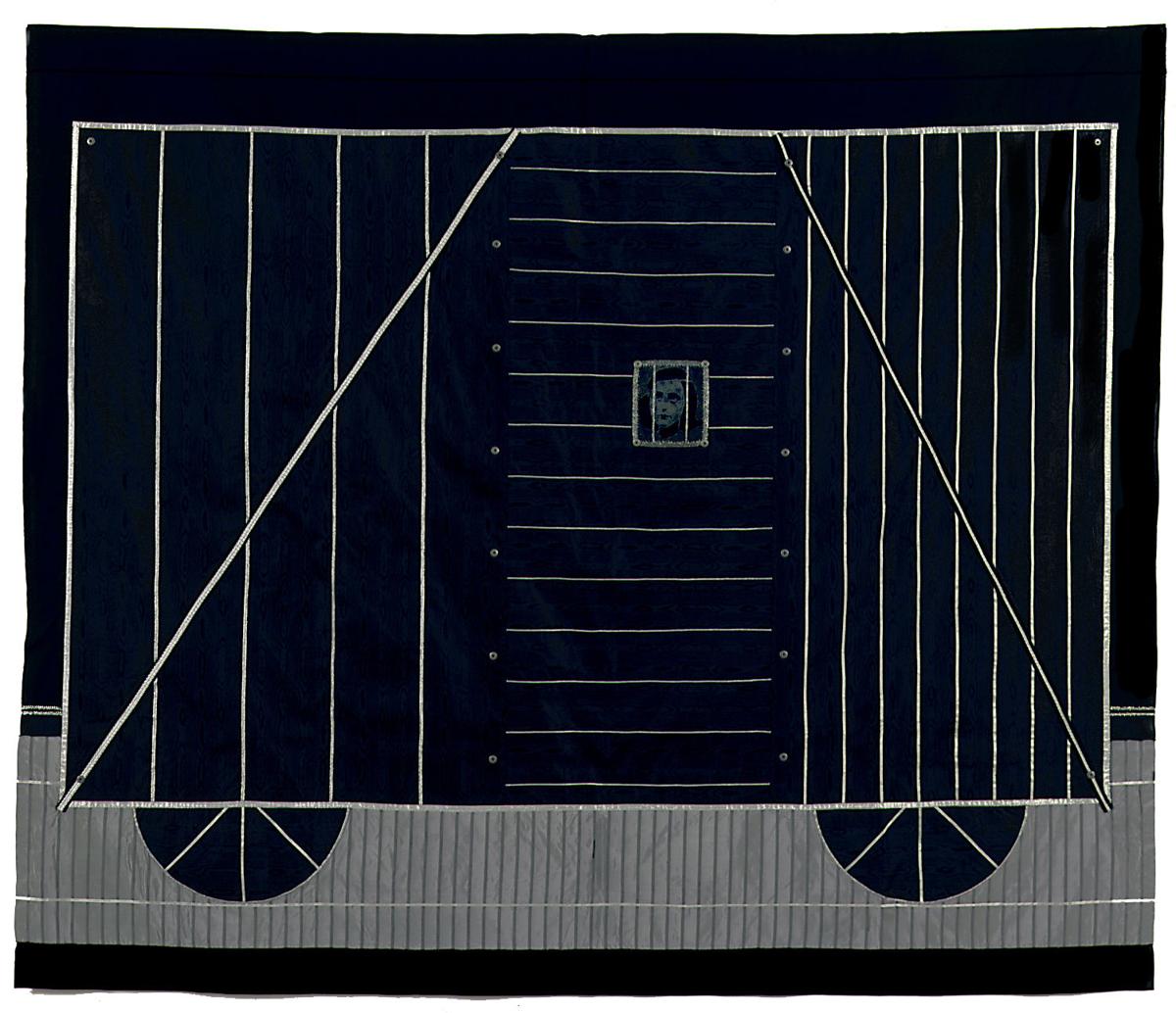 ‘Box Car’ is a scene from the Liberman wall hangings.

‘Anne Frank’s Hiding Place’ is a map from the Liberman wall hangings.

‘Box Car’ is a scene from the Liberman wall hangings.

“Remembering Anne Frank: A Selection From the Holocaust Wall Hangings” will surround – and surely absorb – visitors to “I Remember,” a commemoration of the 70th anniversary of the publication of Anne Frank’s diary, at 2 p.m. Feb. 12 at the Jack and Lilyan Mandel Building at The Temple-Tifereth Israel in Beachwood.

The program, coordinated by Sue Koletsky, director of the 2,000-piece Temple Museum of Jewish Art, Religion and Culture collection at the synagogue, and Fern Ruth Levy, director of the Anne Frank Moral Courage Project, will focus on the singularly tactile and evocative work of Judith Weinshall Liberman, a Boston-area textile artist who donated 45 of her Holocaust wall hangings to the Temple. The Temple plans to “rotate” Liberman’s other wall hangings through its Hartzmark Center in the future.

The six Liberman wall hangings on view in the Hartzmark Center are of various sizes and three modes: maps, scenes and epilogues.

The maps, based on the expertise of British historian Sir Martin Gilbert, show Anne trapped in her Annex hiding place in Amsterdam; on her journey from birth in Frankfurt, Germany, to death at Bergen-Belsen concentration camp; and snared in what resembles a spider’s web but actually is the topography of Amsterdam.

The one scene is called “Box Car.” It’s stark and prison-like, an imaginative glimpse of a kind of way station Anne occupied on the way to her death. The epilogue, “Witness,” is a relatively small piece, dominated by an image of Anne, like all the rest. But unlike the maps and scenes, her epilogues incorporate Liberman, and contemporaneity, into the work. In this, Liberman’s eye, colorful unlike the black-and-white eyes otherwise in command, stares at the viewer, daring him or her to look back. They also ask where God was during the Holocaust, Koletsky said.

The “front” of the exhibit is “Remembrance,” a standalone. Lurid to the point of gore, it is a violent if disciplined patchwork of reds, blacks and whites, a dark explosion of concentration camp body parts in which Anne seems trapped. Liberman intends it as both introduction to and summation of her Holocaust wall hangings.

Not only do the works differ in classification, they vary by material and texture, and the closer one looks, the more levels they reveal. While there are only six such hangings, each offers an opportunity in which to get lost, or, at least, to again reflect on the Holocaust and on Anne Frank, a symbol of that singularly horrifying event whose poignancy makes for a deeper ache.

The exhibit is the result of a meeting between Koletsky and Liberman in Boston. “We had a conversation and she showed me her work and I thought it was extraordinary and incredibly moving,” Koletsky said. “We developed a relationship, and the rabbi and the board president saw it in her studio and Judith chose to donate all of these pieces to our museum because she wanted to keep them together as a collection and to share them with the community.”

“Perhaps more than any other contemporary work of literature, Anne Frank’s diary represents the triumph of goodness over evil, light over darkness, hope over despair, and faith in humanity, despite its so often being undeserving,” he wrote. “In a world awash in hatred, bloodshed, and inhumanity, a commemoration of the diary’s 70th anniversary of publication offers a much-needed opportunity for remembrance, reflection and renewed belief in a better future.

“Judith Weinshall Liberman’s Holocaust Wall Hangings convey the tragedy of Anne Frank’s death and the triumph of her life and memory in a uniquely powerful way. Instructive, and both heartbreaking and inspiring, these exquisitely crafted works of art reveal the Holocaust’s personal, Jewish and universal dimensions. The Temple is privileged to be the custodian of this artistic legacy and to share them with our community.”

Levy, who said she came up with the program idea, has interviewed people who knew Anne Frank and she looks forward to the Feb. 12 event. Koletsky will explain Liberman’s artistic process and the artist’s relationship to Anne Frank. Levy will present an overview the Frank legacy, Temple members Roman Frayman and Stanley Morgenstern, respectively a Holocaust survivor and a World War II veteran, will speak, and the chamber ensemble, Panoramicos, will perform “I Remember,” a musical distillation of the two years Anne Frank devoted to her diary.

Carlo Wolff is a freelance writer from South Euclid.

‘I Remember: a Commemoration of the 70th Anniversary of Anne Frank’s Diary’