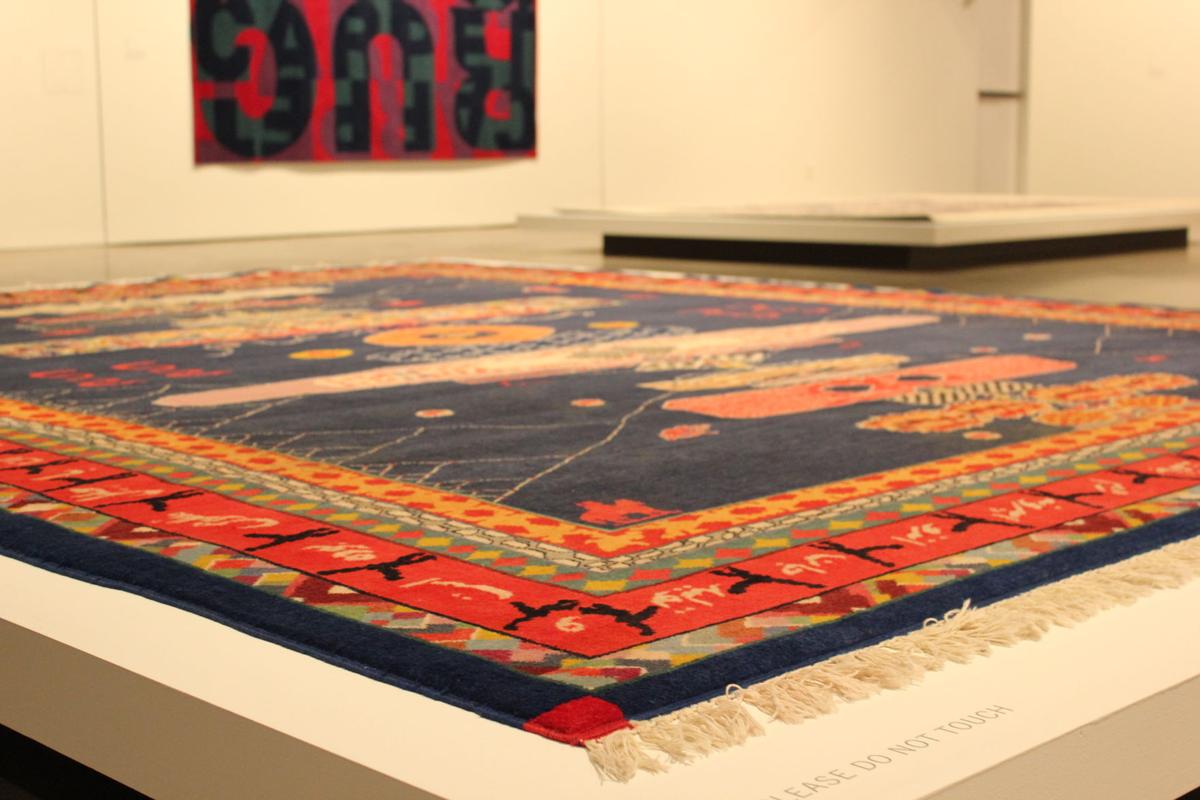 An untitled work by Italian conceptual artist Alighiero e Boetti greets viewers to “Wall to Wall.” In the background is “Carpet Rug” by Heimo Zobernig. 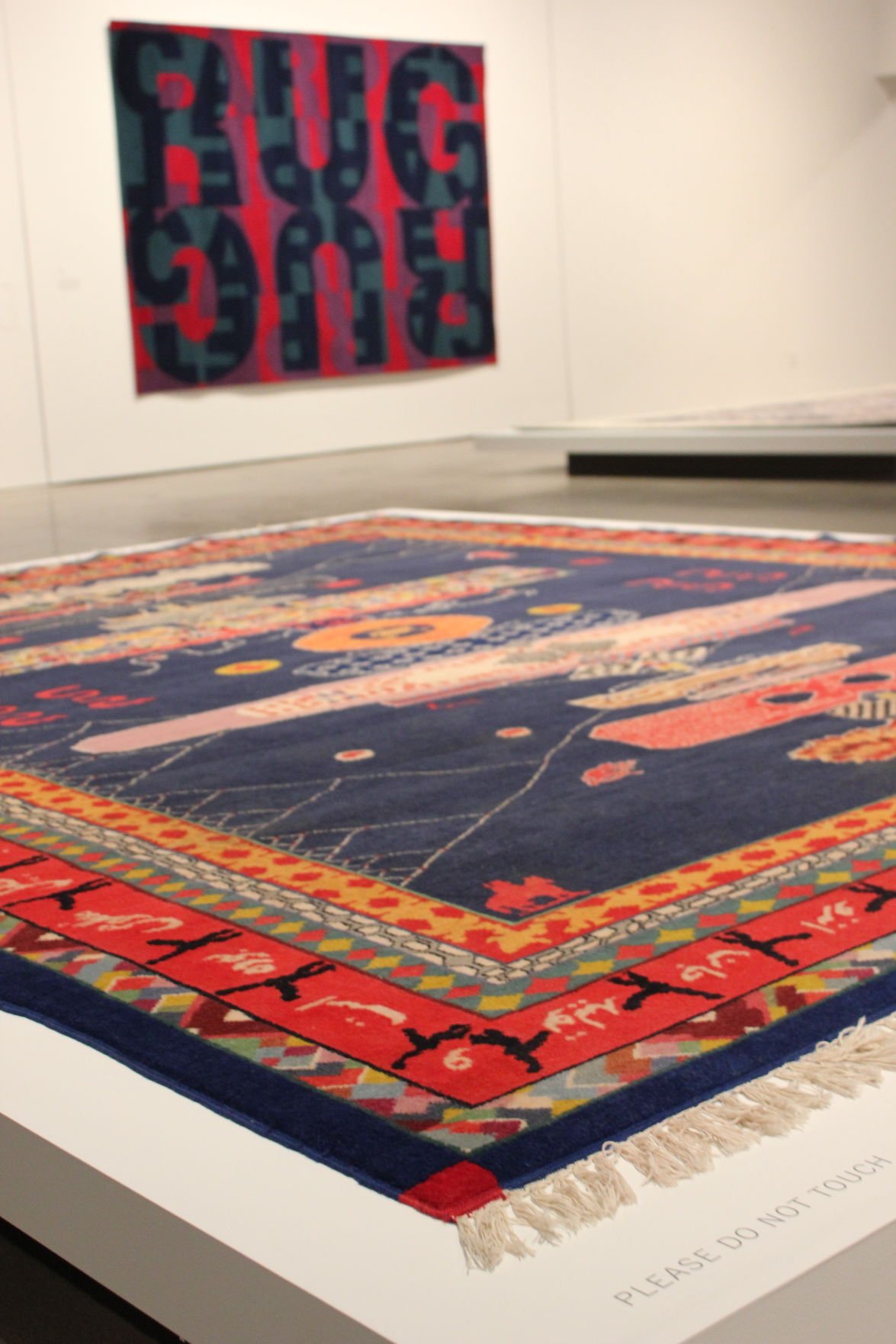 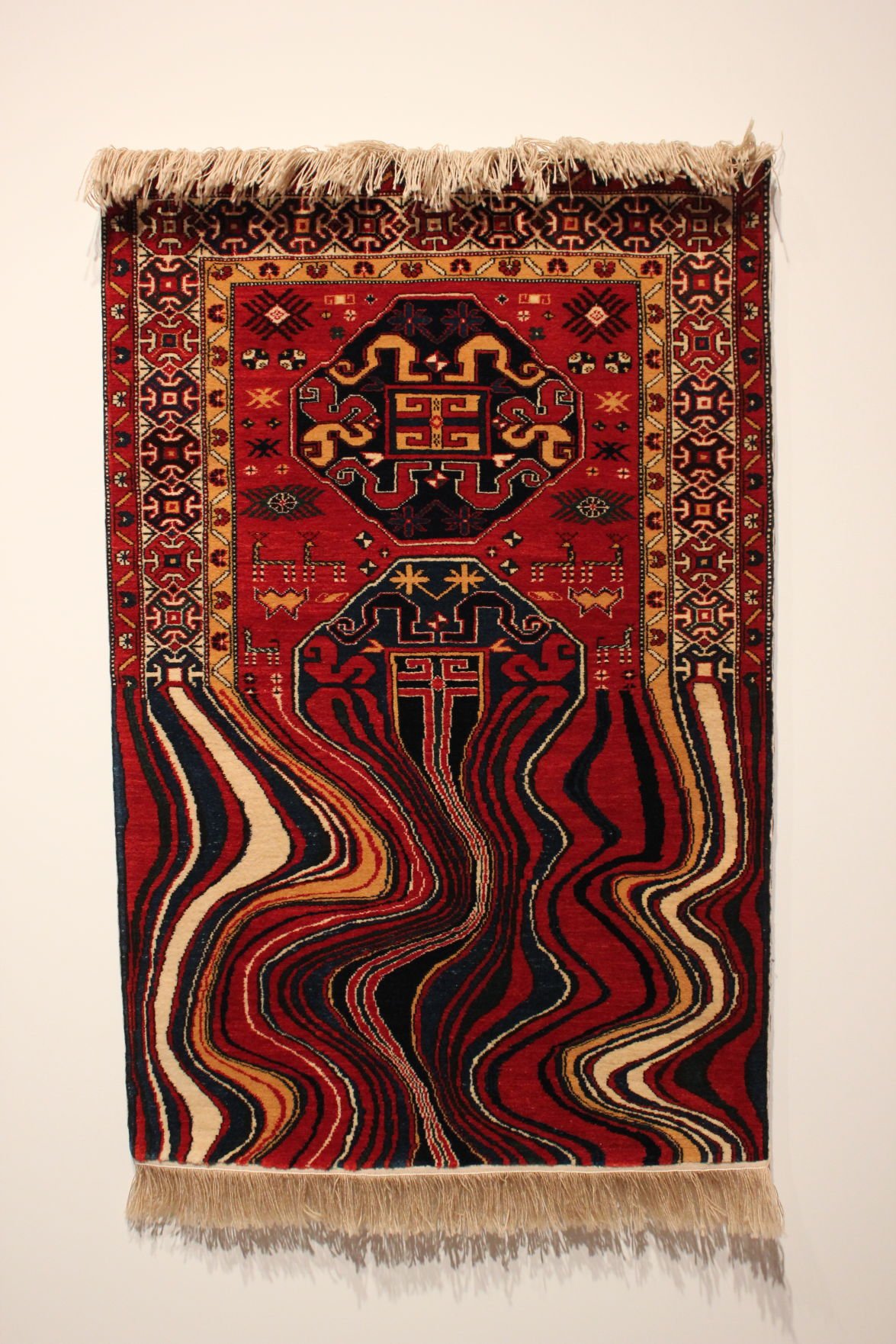 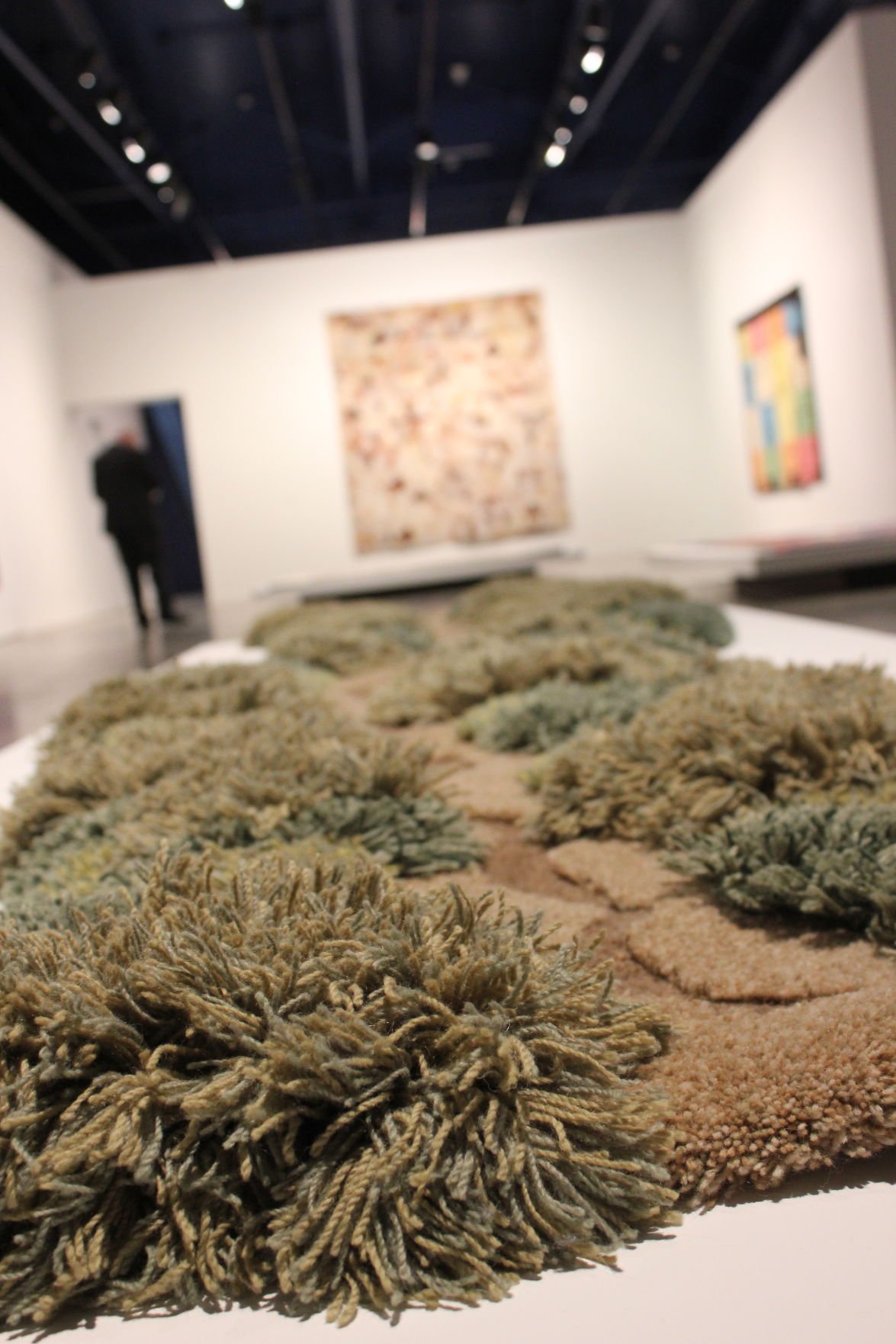 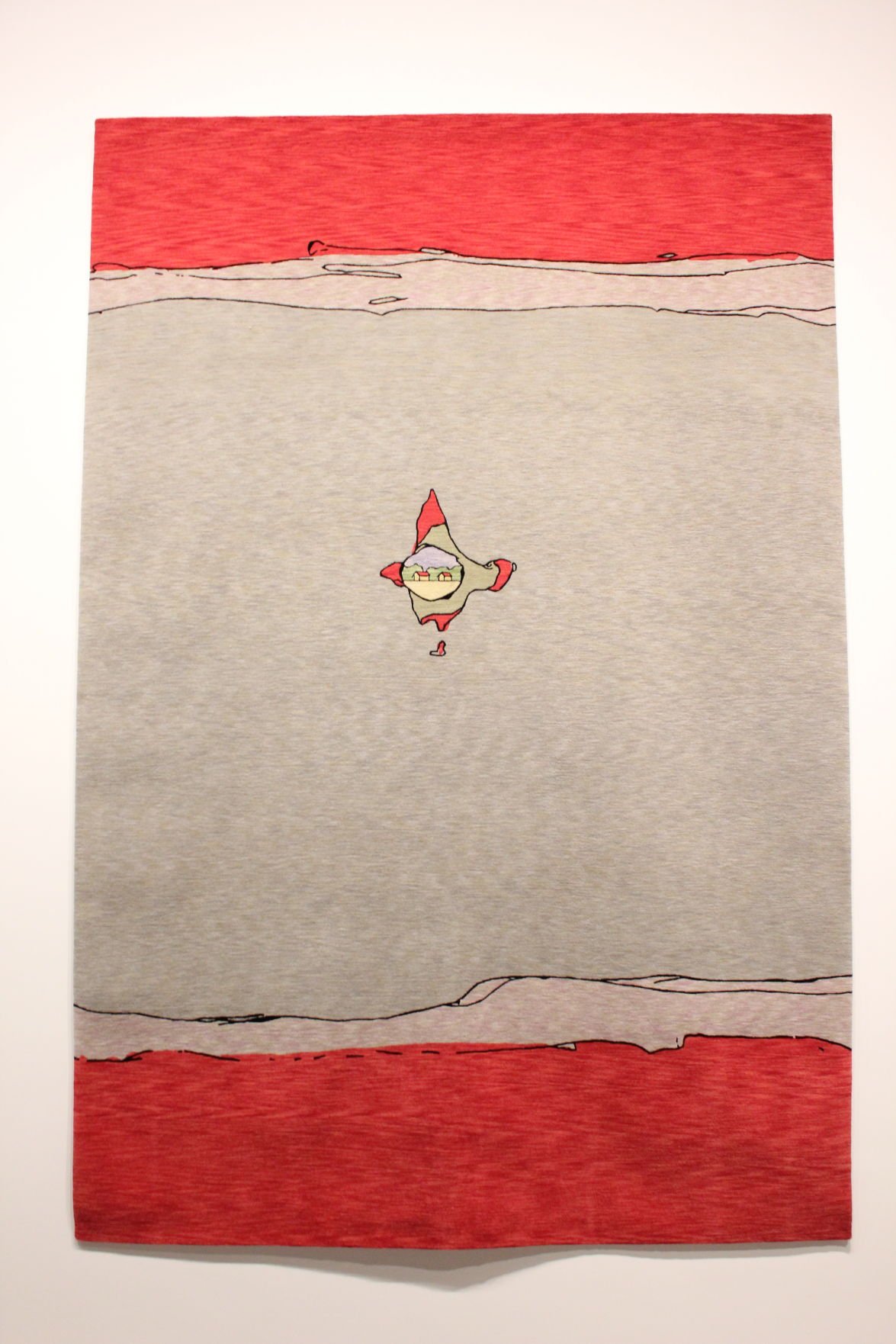 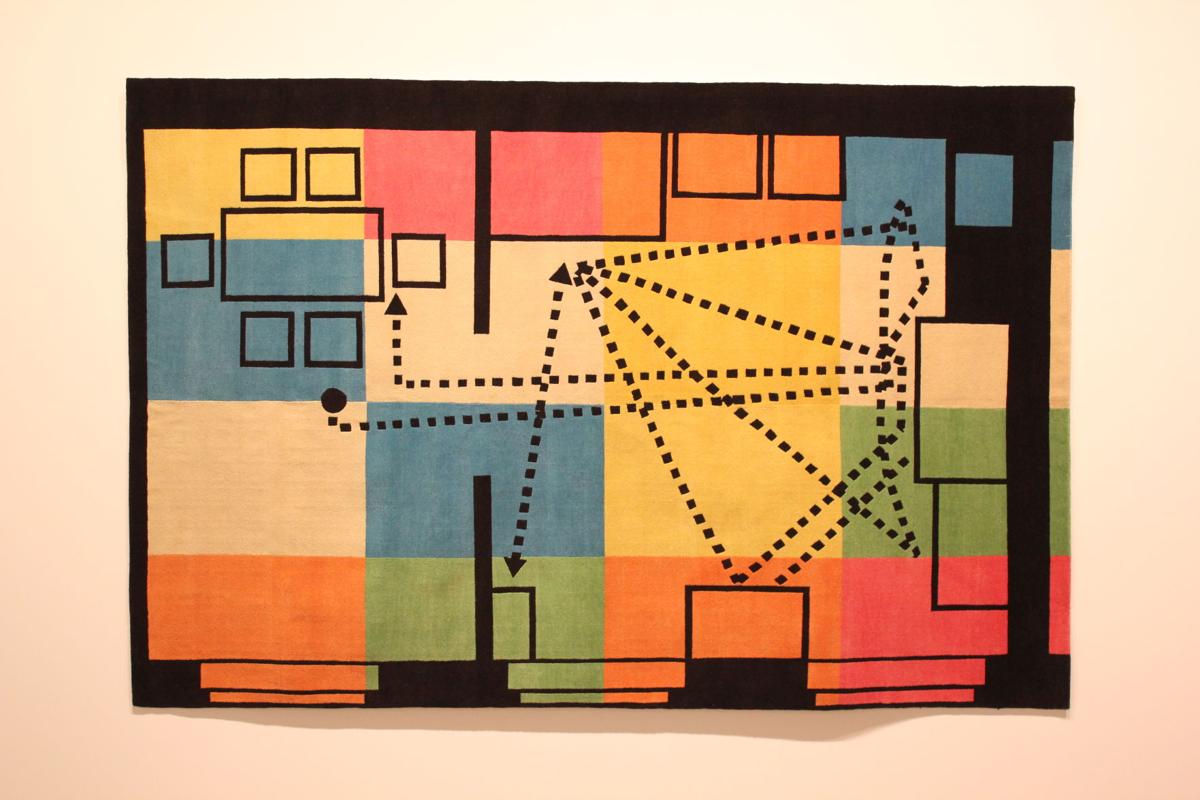 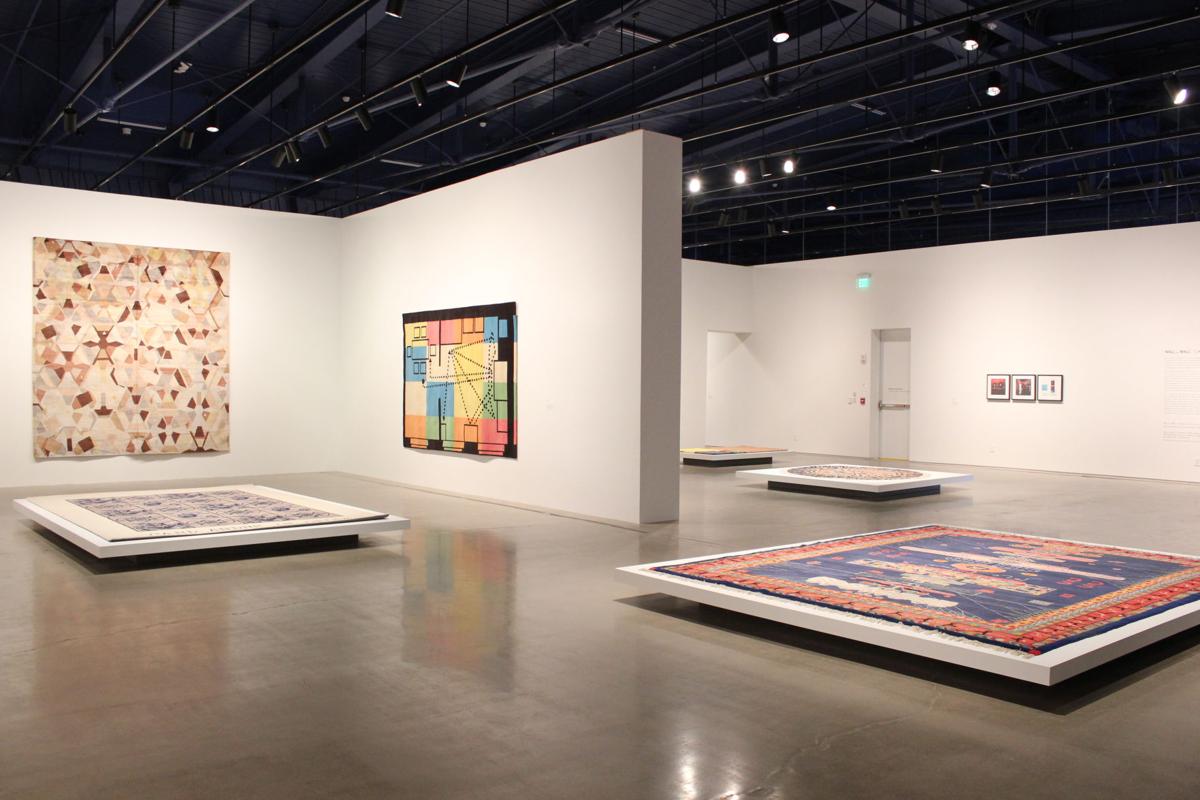 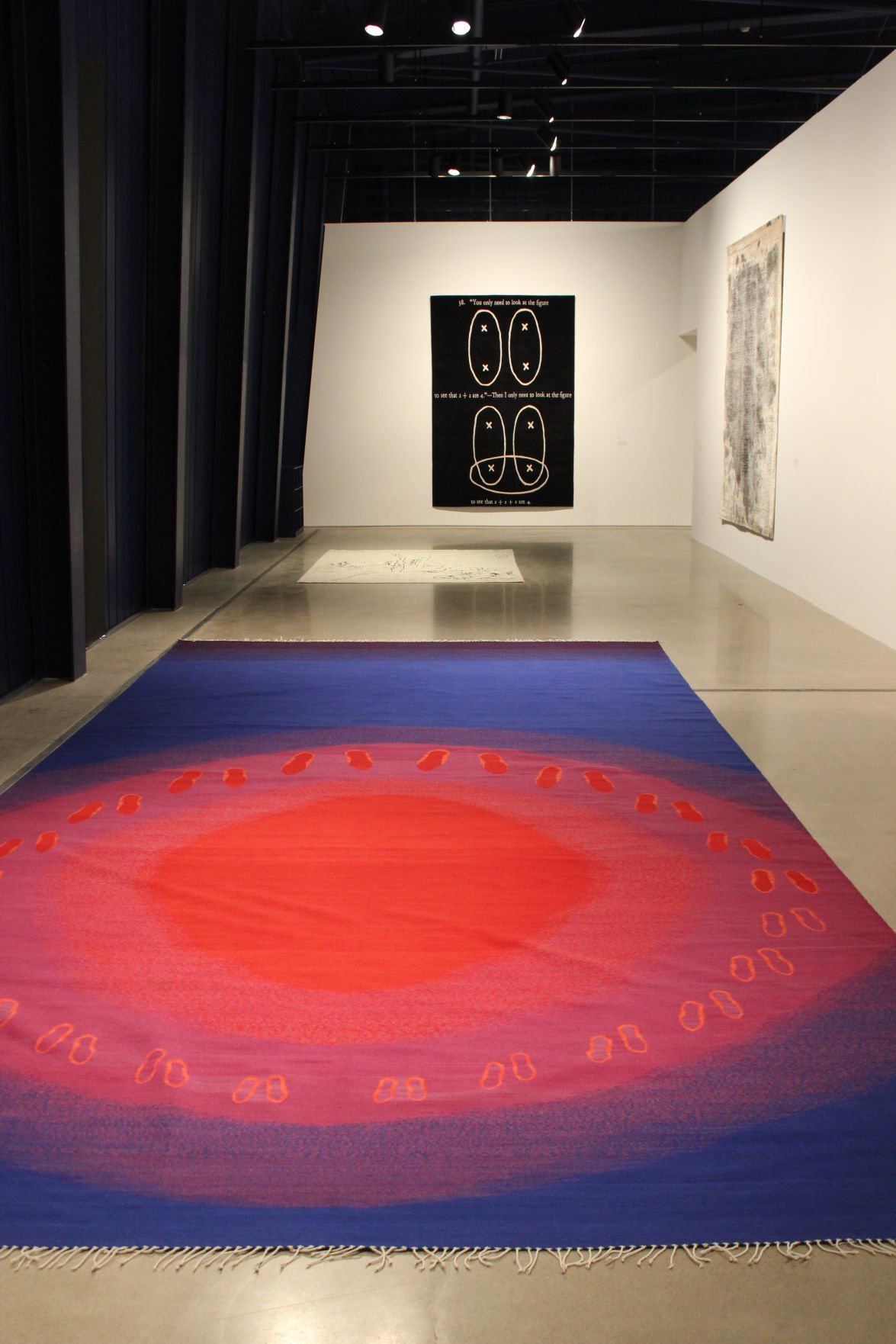 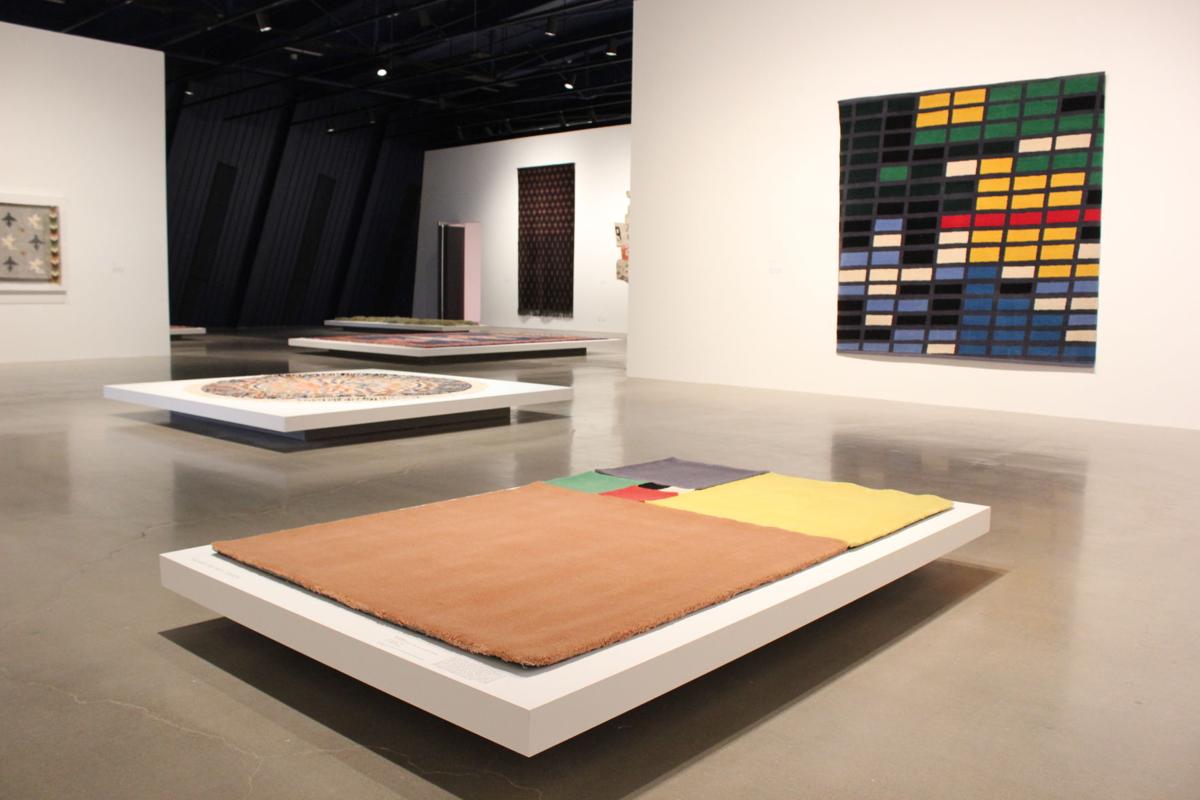 An untitled work by Italian conceptual artist Alighiero e Boetti greets viewers to “Wall to Wall.” In the background is “Carpet Rug” by Heimo Zobernig.

Carpets, by definition, are regularly looked down upon. But the Museum of Contemporary Art Cleveland’s headlining fall exhibition, “Wall to Wall: Carpets by Artists,” rightfully elevates them, both literally and figuratively.

From the moment one enters the exhibition, presentation, positioning and even framing signal to viewers the medium’s ascendancy in the worlds of modern and conceptual art. These factors also remind those who recognize carpets more for their place in the home that in many other parts of the world, carpets are compelling vehicles for conveying culture and history.

At eye level, the works invite viewers to inspect and imagine their origins. “Wall to Wall” weaves a tapestry of cultures, artists and artisans, and the intricate, textured works evoke interest not just in craftsmanship, but also in where they were made and by whom.

The exhibition has a decidedly international flavor. All told, 30 artists contributed to “Wall to Wall,” and the countries represented by their works, their weavers or the cultures that inspired them span Afghanistan, Argentina, Azerbaijan, Bulgaria, Mexico, Nepal, Russia and Pakistan, to name a few.

Art historian Cornelia Lauf, guest curator for “Wall to Wall,” contends that one of the many features that makes artistic carpets compelling is their tactile nature, juxtaposed with an increasingly digital world.

“I feel the way conceptual art can be pushed along is to reintegrate discussions of the hand and manuality, because in our time, we’re losing many of the languages of craft and material culture all over the globe,” she said. “I feel that artists are always the canaries in the tunnel to see where there are zones of risk or peril, and it’s no accident that this field of textile by artists is absolutely exploding. Artists have a yearning and nostalgia for the object.”

An untitled work by Italian conceptual artist Alighiero e Boetti fittingly greets viewers to the exhibit. Boetti was among the first contemporary artists to adopt carpet and other craft traditions as a primary medium. Visually elaborate, the 1994 work is a compelling combination of imagery and language.

Concepts put forth by other carpets are wide-ranging: “Infinite Carpet” by Pierre Bismuth is a nod to mathematics’ Fibonacci series; “L.W. (Remarks on the Foundation of Mathematics)” by Joseph Kosuth waxes philosophical; and “Lihotzky Carpet” by Liam Gillick pays homage to the first female Austrian architect, Margarete Schutte-Lihotzky, a pioneer of social housing. There are even a few carpets in the exhibition that visitors can walk on and touch.

Born in Denmark, artist Anders Ruhwald now lives in Detroit, where in 2014 he purchased a dilapidated 7,000-square-foot brick apartment building at 3583 Dubois St. – an address that no longer exists because the city reassigned it as 2170 Mack Ave. Ruhwald is restoring the building (one day, he plans to live there), and in the process, he’s converting the rooms of Unit 1 into a permanent abstract installation, due to open in 2017.

The MOCA exhibit is a smaller version of what will appear in Detroit, slightly reconfigured to fit MOCA’s space. Walking through Unit 1’s door – brought from Detroit for this show – leads to a fully immersive experience. Engulfed by darkness, participants shuffle through the labyrinthian apartment, encountering native stools and radiators but little else – other than heat lamps Ruhwald installed to signify warmth and fire, the latter ideal for Ruhwald’s exploration of destruction and renewal. Charred wood, ash, molten glass, found objects and black-glazed ceramics also call “Unit 1: 3583 Dubois” home.

Loss – but not necessarily sadness – is the sense with which one exits “Unit 1: 3583 Dubois St.” Detroit’s cycles of success and trauma – the same cycles experienced in Cleveland and other Rust Belt cities – figure heavily into the installation, suggests MOCA deputy director Megan Lykins Reich, who organized the exhibition.

To wit: A small, framed black-and-white photo of the Hawaiian coastline that Ruhwald found inside the building after he bought it hangs by the front door. On the back of the photo, a date from 1941 was written. Japan’s bombing of Pearl Harbor that year transformed Detroit’s already humming auto industry into a wartime industry powerhouse – a high point for the city’s residents. But considering the economic decline brought about decades later by a globalized economy, one wonders whether the photo came to represent an escape to a better life or brighter future – especially as one passes the photo while exiting the dark apartment.

Third and fourth elements of the fall exhibition, both curated by MOCA assistant curator A. Will Brown, explore forms of media and communication.

“A Rising Tide Lifts All Boats,” by San Francisco-based Anthony Discenza, is a 23-minute audio installation that offers a critique of the way mass media uses language.

In an overly dramatic tone, a voice meant to evoke a newscaster announces nonsensical juxtapositions like “Think Schoolhouse Rock meets Full Metal Jacket” and “Think Hogwarts meets Outback Steakhouse,” employing an explanatory tool used to simplify understanding of complex concepts by breaking them down into known quantities. However, the pairings in “Rising Tide” leave one confused but amused – which is the idea.

Use of a professional voice-actor to deliver the constant stream of absurd remarks overtly points out that inherent in most forms of broadcast media is an element of entertainment, and that the authoritative baritone is piped into MOCA’s insulated, bunker-like Interior Staircase conjures Orwellian perception manipulation. In other words, the museum’s presentation and use of space for “Rising Tide” is spot-on.

“Acts of Speech” occupies Gund Commons on MOCA’s ground floor and features videos from four artists, all of which will be on view for about three-and-a-half weeks through the end of MOCA’s fall season. Collectively, the works explore themes of immigration, nationalism, isolation and digital mediation at a time when those same themes are prevalent in American political theater.

The video on view during the opening weeks (through Oct. 19) is New York-based artist Liz Magic Laser’s “The Thought Leader,” which drops a child actor onto a faux-TED Talk stage with an audience of adults hanging on his every word.

What’s the boy talking about? He’s reciting an 1864 Fyodor Dostoyevsky text that poses questions about an individual’s role in society. Such a weighty topic delivered by a slight, lightweight boy provides the viewer with comical contrast, but during a moment in the video when the audience laughs, perhaps questioning his presence on stage, the boy stares back at them steely-eyed, as if to question how present they are.