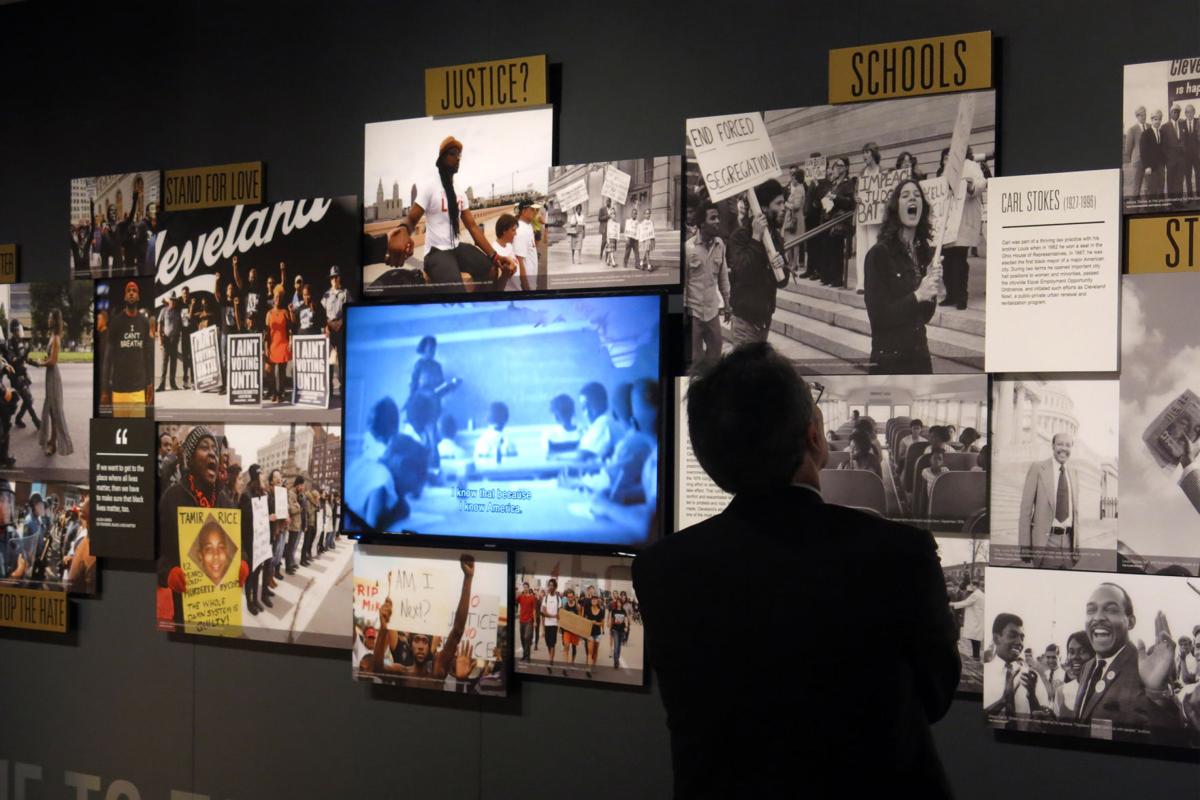 Kenneth B. Liffman, a member of the Maltz Museum board of trustees, inspects the Cleveland section of “This Light of Ours.” 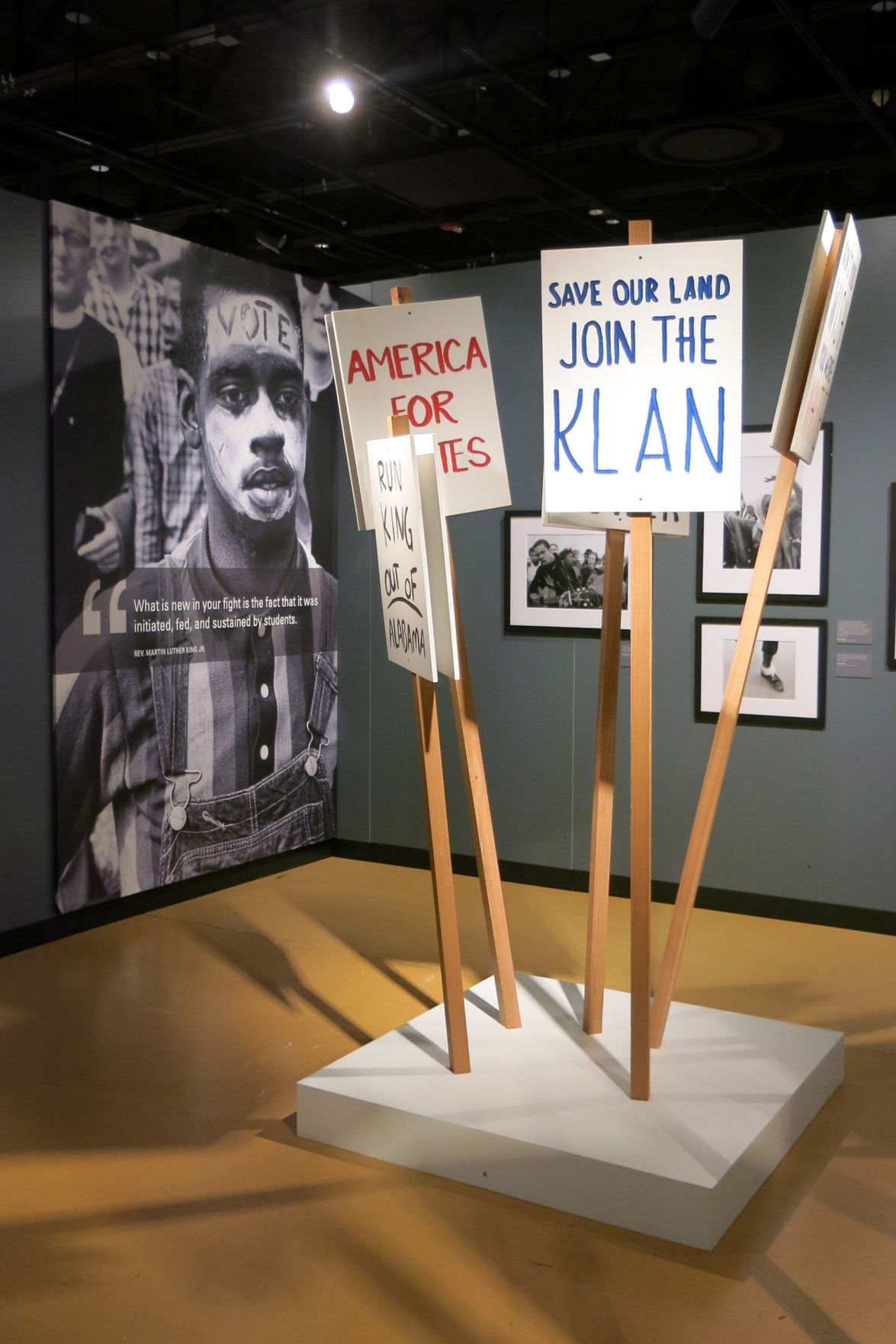 The Maltz Museum fabricated the cluster of hate signs for the “This Light of Ours” display at the Beachwood institution.

Kenneth B. Liffman, a member of the Maltz Museum board of trustees, inspects the Cleveland section of “This Light of Ours.”

The Maltz Museum fabricated the cluster of hate signs for the “This Light of Ours” display at the Beachwood institution.

One of the many striking features of “This Light of Ours,” the stirring exhibit of civil rights photography at the Maltz Museum of Jewish Heritage, is how low-key it is. This is a display focused on timeless issues. It is not about flash or theatrics, though it’s packed with drama.

The nine photographers showcased here, who abandoned their objectivity to participate in the civil rights movement of the 1960s, decided to tell the story of ordinary people with extraordinary passion. That’s why, for example, Matt Herron’s photos of black protestors smiling as an integrated march passes through rural, “virulently racist” Lowndes County in Alabama are so moving.

At the same time, “This Light” doesn’t sugarcoat the ugliness that fueled the movement that brought white sympathizers, including Anshe Chesed Fairmount Temple Rabbi Arthur J. Lelyveld, to Mississippi in 1964. Herbert Randall’s photo of a bloody but unbowed Lelyveld is one of the more memorable images.

At the heart of this exhibit, which runs through May 14, 2017, is a room about local and state terror. At its center is a cage that partially replicates the “nigger wagon” Jackson, Miss., police used to round up protesters.

On the outside of the cage are quotations about courage, perseverance and human rights. On the inside are photos of the wagon in action. It’s an arresting way to frame the issues that were being played out at that time.

Pictures by Bob Adelman and Herron show police intimidation; black girls taunted by white adults; a black girl trying to make eye contact with a guy wearing a hard hat stickered with a Confederate flag; white guards dragging another black girl on the street; a black girl picketing a department store in Birmingham. Even innocent bystanders were corralled.

The exhibition, which originated at the Center for Documentary Expression and Art in Salt Lake City, has been customized by and for the Maltz Museum. Not only did the Beachwood institution add a section on Cleveland – the exit area celebrates brothers Carl and Louis Stokes, respectively the first black mayor of a major American city, and Ohio’s first black congressman – it also added 3-D, immersive images like a “freedom cross” and a thicket of hate-slogan signs.

The exhibition opens with a recreation of a bedroom in a sharecropper’s shack. It feels lived in, authentic. That paves the way for the heart of the display, 150-plus black-and-white images by photographers of different backgrounds and ethnicities who found common cause in civil rights. Named after an old gospel song, “This Light of Ours” serves up pictures of segregation, like an Adelman image of a socialite gathering in Dallas where, as the caption says, the maid “was just another piece of furniture,” and of determination, like Herron’s photo of Jim Leatherer wearing a yarmulke, so sweaty his T-shirt stuck to him as he walked the 50 miles between Selma and Montgomery, Ala., – on crutches.

Bob Fitch’s photos of the funeral of Martin Luther King Jr. in Atlanta are particularly heartbreaking. They show King’s family, friends and mourners devastated by his assassination in 1968. Remarkable blends of directness and respect, these photos show King’s family in moments as intimate as moments get, but there’s nothing of celebrity in them, only sorrow. The photos attest to Fitch’s sense of the gravity of the event. He captured that while maintaining a proper, respectful distance from his subjects.

“It’s impossible not to connect the images that you see with what’s going on in our country today,” said

Ellen Rudolph, executive director of the museum. People protested police brutality then – and today, with “the same messages being telegraphed.”

“The broader message was the civil rights movement was not a moment in time, but civil rights are something we constantly have to fight for,” Rudolph added, noting that “on the eve of this incredibly divisive presidential election we’re still fighting for voting rights.”

“This Light of Ours: Activist Photographers of the Civil Rights Movement”