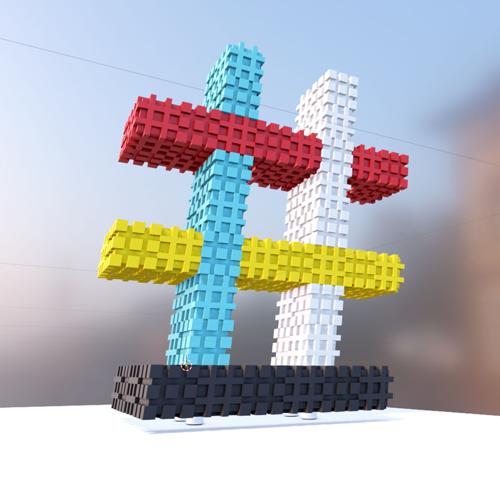 Andrew Reach’s “#” 3D artwork as a work in progress in the digital program, Blender. 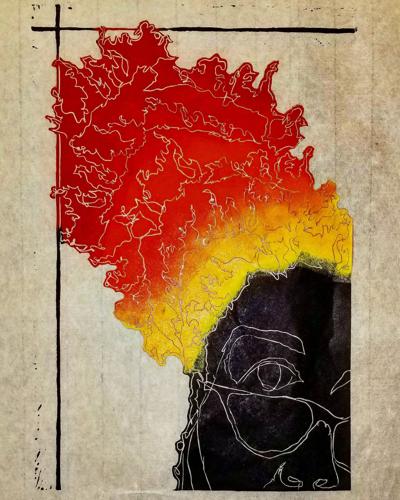 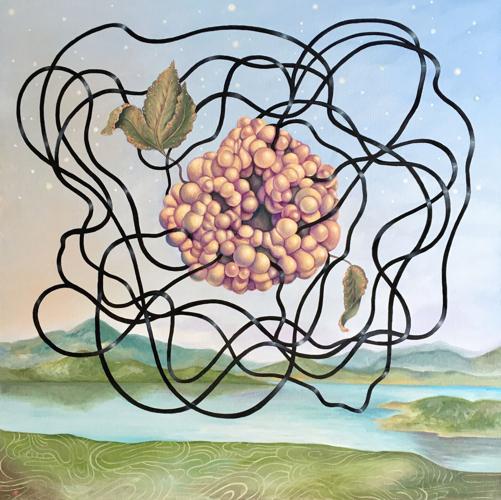 Andrew Reach was a successful architect for 20 years, channeling his creativity into designs in cities like New York City, Los Angeles and Miami. Between 2003 and 2005, the Miami Beach, Fla. native’s longtime challenges with his spine began to exacerbate, requiring surgery and extensive treatments for what was then diagnosed as a progressive spinal disease. After treatments and recoveries, his pain remained debilitating.

“I just kind of had to come to terms with that (and) that I wasn’t going to be able to return to work, at least for the near future,” he said of ending his architecture career, which often required him to travel and work long days.

“I ... felt like a fish out of water. I didn’t have my architecture profession. I didn’t know what to do the rest of my life,” he said.

His husband, Bruce Baumwoll, suggested he design graphics for cards to sell on his eBay business. Reach learned a little Photoshop and started creating. He found a new, unexpected outlet for his creativity – making abstract artwork in digital media.

“The artwork just started coming out of me … I don’t really understand how it happened,” Reach said.

Within a year, he had his first solo show, which was reviewed by a prominent Miami art critic. And when he and Baumwoll moved to Cleveland’s Detroit Shoreway neighborhood in 2007, he kept creating often bright, sometimes kaleidescope, angular pieces. Abstractly, his work reflects on experiences with chronic illness and physical pain.

“I get to show it to the public, I get to express it, and I get to bring some joy and beauty into the world,” he said. “But I think first and foremost, it’s kind of like breathing as a necessity – art for me has become my savior in a way. It really has helped me get through what I have to deal with on a daily basis.”

Reach is one of nine artists in the Artists Archives of the Western Reserve’s new exhibition “W/O Limits: Art, Chronic Illness, & Disability,” which opened at the Cleveland gallery Sept. 22. On view through Nov. 12, it displays the work of regional artists who all have something in common – living with chronic illness and/or disabilities, and often reflecting on those experiences in their work.

The exhibition also aims to be inclusive and accessible for all visitors and is hosted in partnership with the Cleveland Sight Center and Cuyahoga County Board of Developmental Disabilities.

“We are trying to be conscious of as many needs as possible,” Alves said. “It’s kind of cool because that means that people who are able-bodied, for example, coming in will start to think about where places in their life may not be accessible because they are seeing all these cool measures being put into play in the gallery that kind of puts it on your radar.”

Stories behind the exhibit

Alves, marketing and program manager at AAWR, came up with the idea for the exhibition as an extension of her own experience with scleroderma – a rare, incurable and progressive autoimmune disorder that impacts connective tissue. Living with it for about four years now, she said although she has an “amazing team of doctors,” the illness and symptoms “completely changed the tenor and the fabric of my life.”

“I was looking around and noticing these amazing artists in my sphere that had different chronic illnesses and disabilities,” she said. “It started to come together that there’s a community there, there’s a group of people. And considering the CDC says at this point that one out of four people – about 26% of the U.S. population – experiences some form of disability, it all kind of clicked: the personal journey, the artists I’ve been running into, and this real desire to highlight what can often be a disenfranchised and overlooked community, particularly in the arts.”

Tousley, executive director and chief curator for AAWR, expressed support and enthusiasm – and gave her curatorial expertise – for the idea, and the pair began to bring it to life, Alves said. They began identifying artists who were also advocates or self-identified publicly as disabled or living with an illness.

One misconception they faced was when some heard it was to focus on artists who have disabilities and chronic illnesses, “there’s this idea that they are somehow not professional-level artists,” Alves explained. While many of the artists featured aren’t shy about sharing their experiences, billing them as “disabled artists” is akin to categorizing “women artists” in that manner. Quite simply, they are professional artists “of the utmost caliber and talent,” Alves said.

One artist featured, Chappelle Letman Jr., who died in 2020, was a painter and printmaker. After becoming blind, he switched to carving stone sculptures which were collected nationally. MANDEM, an artist group in the show working across media, is also “a huge advocate for disability in the arts,” Alves said.

Kristi Copez, another artist featured, is a ceramist who also works with metals and “dabbles in most other things,” she said. Living with autoimmune diseases, chronic pain and fibromyalgia, she said she wasn’t immediately sure if she wanted to draw attention to that aspect of her life, but hesitated only briefly before agreeing to take part.

“I absolutely want to be seen as someone who is sick but despite that illness, the goal is to not just thrive, but to be an example to other people who can maybe find a way to thrive despite their day-to-day struggles with illness and disability,” said Copez, who resides in Parma Heights.

Like Reach, her artwork deals with trauma and being sick in an abstract way. And both Copez and Alves said the exhibition highlights the importance of compassion, alluding to a societal problem that such compassion is not extended to those with disabilities, illness or other challenges often enough.

“In the interactions I have with others and support groups and stuff, a lot of us want to be seen,” Copez explained. “We want to be valued for who we are, not for what we are not – what we can’t do – and we don’t want pity. But we also want to be able to say ‘help.’”

That concept of compassion also had personal significance for Alves, which she found in curating the show.

“The show is actually helping me be more compassionate to myself in my illness,” she said. “It’s really fantastic in that sense because, how do I curate a show with this deep honoring and respect for people with all sorts of chronic illness and disability, and not also be compassionate to my own limitations and experience? That’s been very eye-opening of a journey.”

To prepare for the exhibition, AAWR also added to its already-strong accessibility measures. While the gallery is ADA compliant, it worked to ensure wall plaques were at the right height to be viewed from wheelchairs and that each written aspect was also in braille, with which the Cleveland Sight Center assisted, among other accommodations.

The artists themselves contributed to making the show accessible, Alves said. A section features touch pieces for people with visual impairment or with sensory sensitivities.

Reach created a 3D “#” piece that can be held and felt by visitors. He researched ways to make things accessible for those who are visually impaired, such as having a lot of contrast, being tactile and having patterns. He kept those three things in mind when crafting his work.

“This has been really helpful putting my headspace into this 3D project. It’s been kind of a godsend ...,” Reach said. “... Challenges kind of get me in the best headspace and get me into another mindset that makes me forget about the pain.”

For Copez, living with chronic illness sometimes causes her to “live a double life,” she said. She’ll put on a smile and go about her work and life, while inside she’s struggling with pain and doesn’t want to make others uncomfortable by drawing attention to it. Outside her closest friends, it can be hard to ask people for help, which is sometimes reinforced when she’s treated with judgment when she does ask for assistance, she said. Strangers can also be nosy and ask inappropriate questions when she’s walking with her cane, adding another level of awkwardness to living in a disabled body.

Her work also deals with accepting living with an illness and learning how far to push herself.

“Another big part that connects all my pieces is the idea about pushing beyond limits … trying to live as vibrantly as I can despite all these things that can hold me back day to day, and be different day to day,” she said. “Finding that line which is, can I go further? Can I push beyond what I know, what my knowledge is, what my energy is and pay for it later, versus is it OK to say I can’t?”

The exhibition comes nearly a year after AAWR hosted its significant multi-venue exhibition “CONVERGE,” showing art and stories to highlight the area’s artists who are LGBTQIA+. One notices a theme that both exhibitions give marginalized communities a platform to share their perspectives, successes and challenges on a personal level, as well as draw attention to the incredible wealth of skilled and talented artists within those groups. And in “W/O Limits,” all of the exhibiting artists identify as BIPOC, LGBTQIA+ and/or as women. “Regional art is all the stronger by focusing on places where maybe voices haven’t been amplified in the past, and how do we make the conversation bigger and polyphonic?” Alves said. “Luckily, we are small and nimble, and we have the opportunity to do that, where sometimes larger institutions don’t always have that flexibility to have an idea and to be able to chase it down in real time.”

This story first appeared in Canvas, the Cleveland Jewish News’ sister arts magazine. Read more stories like it at canvascle.com.