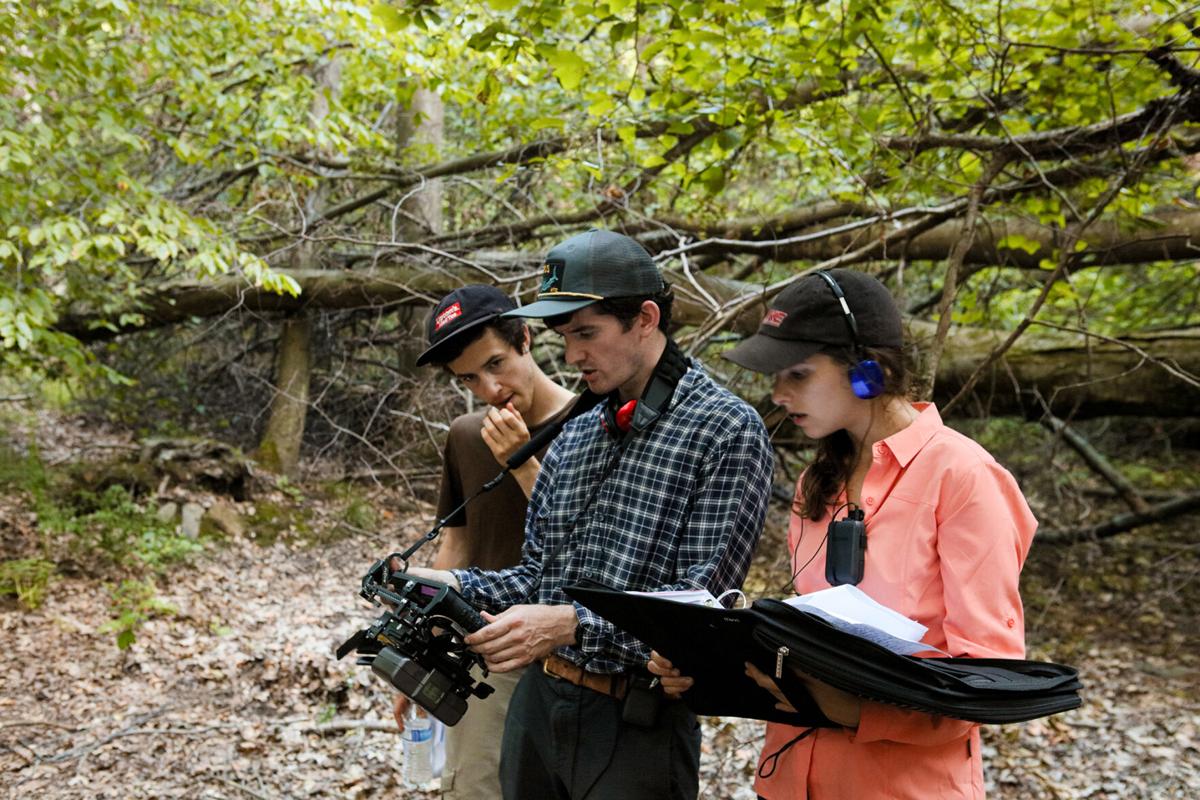 Actor Babe Howard, from left, writer and director Noah Hutton and producer Taylor Hess on the set of “Lapsis.” 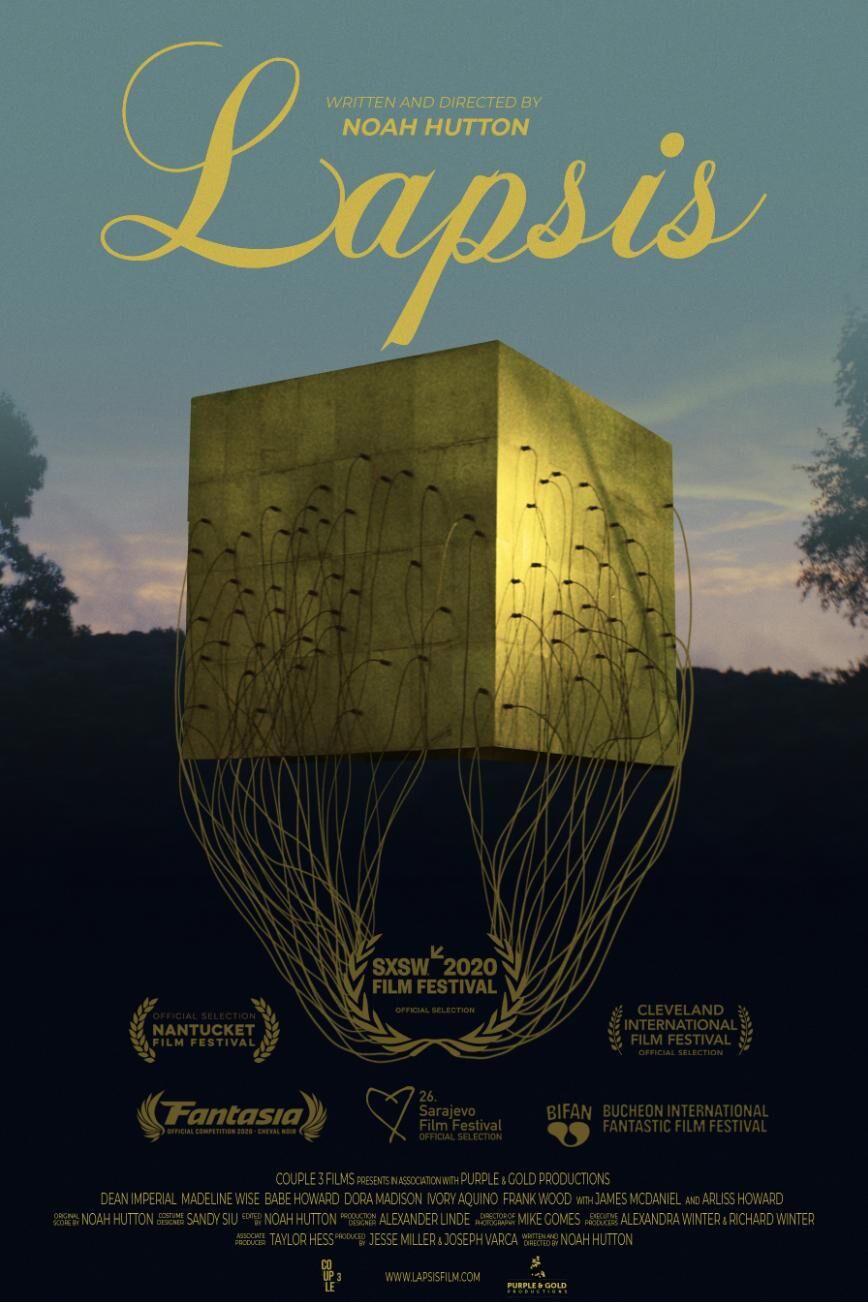 Filmmaking duo Noah Hutton and Taylor Hess, who are married, are on the way to becoming nationwide names with the wide release of their movie “Lapsis,” which debuted Feb. 12..

The film tells the story of delivery man Ray Tincelli, who in a parallel present, is struggling to afford taking care of his ailing younger brother. He takes a job in the forest, pulling a cable for miles to connect it to metal cubes, liking together a new quantum trading market. As he gets pulled deeper into his work, he encounters growing hostility and the threat of robot cablers, forcing him to choose between helping his fellow workers or getting his payout.

Hess, who grew up in Moreland Hills, celebrated her bat mitzvah at The Temple-Tifereth Israel in Beachwood and graduated from Orange High School in Pepper Pike, said the nationwide release is exciting, yet strange.

“Weirdly, we haven’t seen the movie in a theater with an audience yet, especially with a movie like ours which is an independent film, usually set to play festivals,” said Hess, 30. “We have been doing a lot of virtual Q&As, so it is cool that Noah has been able to do that. I do think there’s a disappointment not being able to see the film with audiences, but it will be cool to see it drop online and see the reviews come in.”

Hess previously produced and directed the 2019 award-winning ESPN 30 for 30 documentary, Mack Wrestles, the story of Mack Beggs’ love of wrestling and his struggles with personal identity and outside forces that stigmatize transgender athletes.

Hutton, 33, who grew up in the New York Jewish community, but visited Cleveland frequently with his parents, actress and Cleveland native Debra Winger and actor Timothy Hutton, said the process has been “exhilarating.”

“To know that it is about to be able to be seen by a lot of people, even though we’ve all been stuck in the same place for nine months, to think that in one day our film is available for everyone to see is exhilarating,” he said. “And it’s sort of just another day for us, but that is also the nature of this year.”

As “Lapsis” is Hutton’s first venture into narrative features, he wants people to consider the intrigue of glancing into a world that is similar to our own, but also very different.

“The world of the film, it’s not exactly our world; it’s slightly askew,” he said. “I hope people are exhilarated by seeing sort of this inventive world that they haven’t seen before. And within the message of the film, it ends up being this call for activity and people banding together to help each other.”

The couple, who live in New York and are both Cleveland International Film Festival alumni, also worked on the 2020 release “In Silco” together. Both said the national release of “Lapsis” fits into their shared goals for their careers, especially while making movies during a pandemic.

“You might say success, or the ultimate dream, is kind of a fantasy or some romanticized version of being an artist,” Hess said. “We talked a lot about just trying to stay focused and celebrating the little victories as they come. I think just being able to make a film is amazing since it’s such a hard thing to do.”

When thinking about the sci-fi world of “Lapsis,” Hutton said younger filmmakers shouldn’t feel discouraged from creating something weird.

“There is a pressure in creating something that appears familiar, like something that exists in the world already,” he said. “When making this film, we encountered that a lot – that this world we created didn’t make sense. But, if you have an idea that feels new and original, fight for it. Because when you make it out the other side, the very thing that was a problem or made no sense may make it stand out from the pack.”

Hess said, “It takes a long time to shed back the need to try and get approval or to please others with your art. Do the work because you want to, not because it will mean something to other people. If it does, that is an extra benefit.”

Hess is the daughter of Roger and Karen Hess of Moreland Hills.

“Lapsis” is playing in theaters cross the country for $6.99. By picking a theater to support, half the proceeds go to the theater of your choice. A list of participating theaters can be found at filmmovement.com/lapsis. The film can also be streamed for a $4.99 rental on AppleTV, Amazon, iTunes, FandangoNow and Vudo. “Lapsis” will also be played on demand through cable providers like Comcast, Verizon, Cox and Charter.