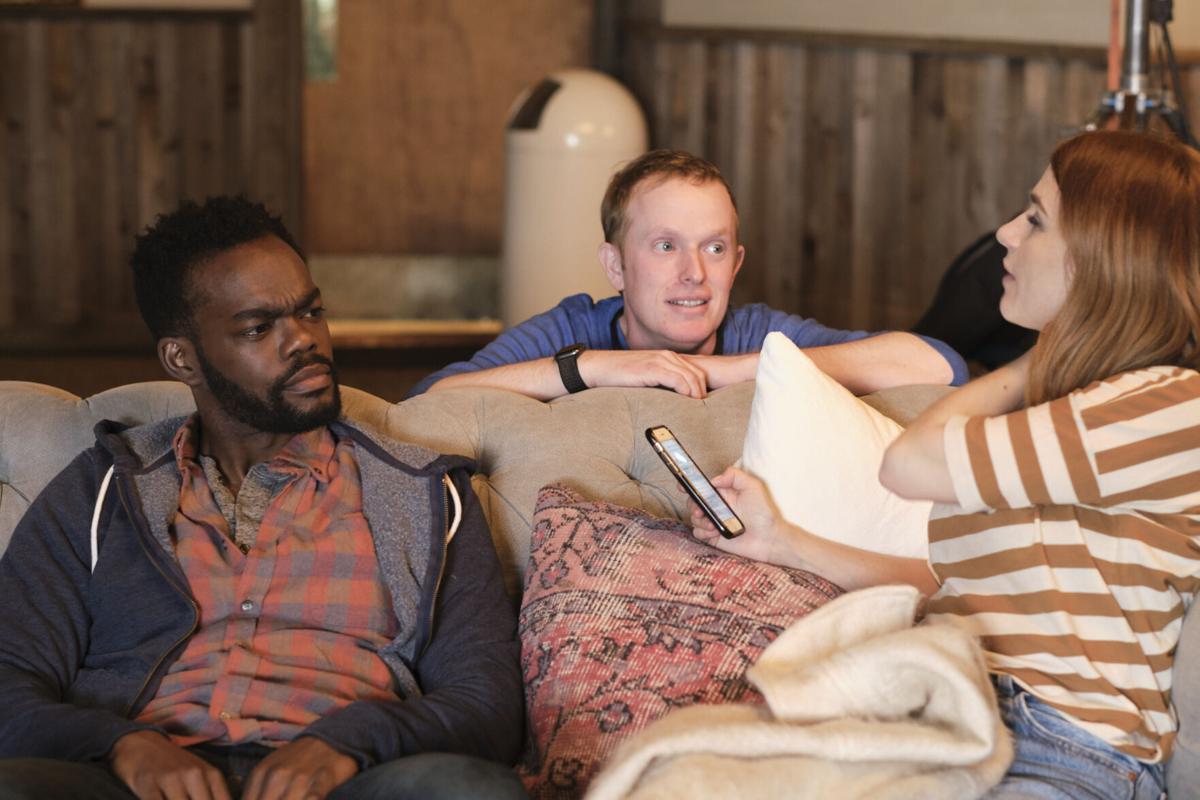 Co-writer, director and producer Jeff Rosenberg, center, with lead actors William Jackson Harper and Aya Cash on the set of “We Broke Up.”

Lead actors Aya Cash and William Jackson Harper on the set of “We Broke Up,” co-written, directed and produced by Cleveland native Jeff Rosenberg.

Co-writer, director and producer Jeff Rosenberg, center, with lead actors William Jackson Harper and Aya Cash on the set of “We Broke Up.”

Lead actors Aya Cash and William Jackson Harper on the set of “We Broke Up,” co-written, directed and produced by Cleveland native Jeff Rosenberg.

Matt Ratner was the co-producer; Alan Mintz was an executive producer and Laura Jacqmin was a co-writer. The three grew up in Cleveland. Producers Mason Novick and John Hermann were also on the production team. Rosenberg previously worked on “Wine Country,” “The Good Place,” “Documentary Now!” and “Veep.” His first film, “OJ: The Musical,” screened at more than 30 festivals when it was released in 2013.

Rosenberg, who graduated from Shaker Heights High School in Shaker Heights in 2000 and Ohio University in Athens in 2004, said the idea for the film started with an opening sequence of a couple staring forward in their car with the text “we broke up” over their heads, followed by the same couple standing on a wedding dance floor with the same text.

But though the movie is about breaking up, Rosenberg told the Cleveland Jewish News “We Broke Up” is not an inherently depressing movie.

“There are a lot of movies about break-ups and I generally don’t like them because I find them depressing,” said Rosenberg, 39, of Los Angeles. “One of my mom’s good friends is still really close with her ex-husband, and I always found it very interesting as a kid because they were divorced. That idea just always stuck in my head. The idea that just because people ended a relationship or are thinking of ending it, that doesn’t mean they don’t care about each other.”

With Jacqmin’s help, Rosenberg said a large part of the writing process was to make sure the story didn’t come from a hateful place, and that no one was portrayed as the villain, which is a common trope in breakup movies.

“It was more about the reality of relationships, but that doesn’t mean the entire thing is drab, depressing or something they regret,” he said. “It is about characters who are at an impasse in their relationship and realize that at that moment they don’t want the same thing. What do you do then? How do you move forward if you still love that person?”

When watching the film, Rosenberg said he hopes people feel they’ve seen an honest and empathetic portrayal of relationships.

“We wanted to tell a story that was as honest as we could about a couple having a tough moment but still care about each other,” he said. “Again, at its core, it is a romantic comedy and we want people to laugh and enjoy themselves. But we also hope it is a film that can transcend that a bit and affect people on an emotional level as well.”

When asked what was next, Rosenberg said he just wants to continue making meaningful and enjoyable entertainment – whatever that is.

“There will for sure be something,” he said. “The only thing I know how to do is make movies or television and then immediately figuring out how to make another. So, there will be something, but I don’t know what yet.”

“We Broke Up,” co-written, directed and produced by Cleveland native Jeff Rosenberg, will start showing in theaters April 16, including Cedar Lee Theater in Cleveland Heights. It will be released on-demand on April 23. Runtime: 80 minutes.