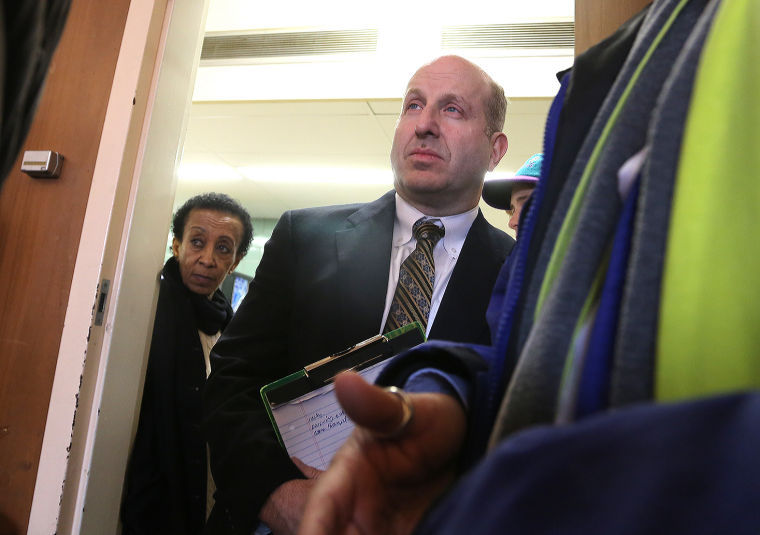 The president of Oberlin College said he is upset by recent hateful messages and graffiti on campus targeting minority groups, including Jews.

“It’s been very personally upsetting,” Krislov, a Jew, said March 4. “Some things have taken aim at me because of my religion. I clearly abhor these expressions of bigotry.” He gathered the college community together that day in an effort to address hate-related occurrences that have struck the campus since early February. The college canceled classes that same day after an early morning report that a person wearing a hood and robe resembling a Ku Klux Klan outfit was seen on campus.

Oberlin Police investigated but were unable to discover anyone in KKK regalia. “Other independent witnesses say they saw a student wrapped in a blanket around the same time,” said Lt. Mike McCloskey.

Two students were removed from campus, but no charges have been filed, said McCloskey. The college declined to comment on any disciplinary action against these students.

“It is important for the campus to pause to indicate its support for its students, faculty and staff who have been subject to various instances of hate,” said Krislov. He believed these acts were the “work of a small group of people who are clearly cowardly.

“If you could see the overwhelming support here for people of color, Jewish people and gay people, you’d conclude this is a very strong, wonderful and lovely community,” Krislov said, referring to the March 4 campus rallies.

A speech Krislov made to the student body at the convocation elicited differing responses.

Rachel Davidson, 19, of Shaker Heights, is a Jewish student. She said she thought Krislov’s speech “was very powerful.”

But Talia Greenberg, another Jewish student, said she “felt the Jewish community was marginalized.” During Krislov’s speech, “He did not specifically refer to himself as Jewish once.” Greenberg, 20, comes from Boston.

On March 5, Jewish students gathered during the lunch hour to build a sense of community. “There were Jews from all different sections of the campus,” said Davidson. “We have many, many Jews on this campus, but we don’t often to get together to talk about our Jewish identities.”

“Today, I’m feeling a lot safer than I did yesterday,” said Greenberg.

As of March 5, the Oberlin Police Department completed its case file and sent it to the prosecutor for review.

FBI Agent Vicki Anderson of the Cleveland office said on March 5, “We have been made aware by local law enforcement and college administrators. Right now, we’re assessing the situation to see if federal involvement is required.”

Last week, Rabbi Shimon Brand, director of Hillel at the college, told the Cleveland Jewish News that students reported to him the appearances of a swastika and other graffiti in the Conservatory of Music. The graffiti occurred during either the night of Feb. 26 or the morning of Feb. 27, Brand said.

“It’s really strange and sad in such a lovely environment that someone would come in and do something so inflammatory in order to make Jews and other people feel uncomfortable,” he said.

Anti-Semitic, racist and homophobic graffiti also were found at the college on Feb. 9 and Feb. 12, according to an article in the campus newspaper, The Oberlin Review.