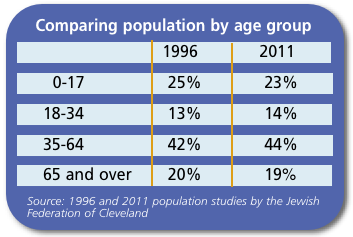 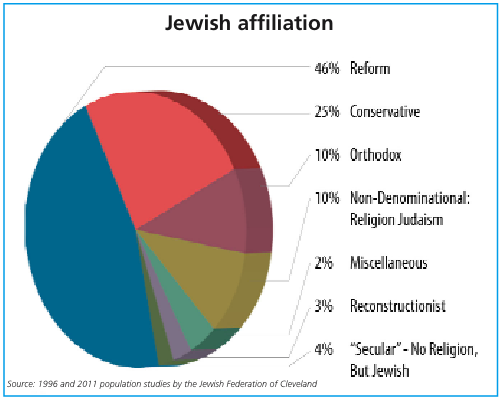 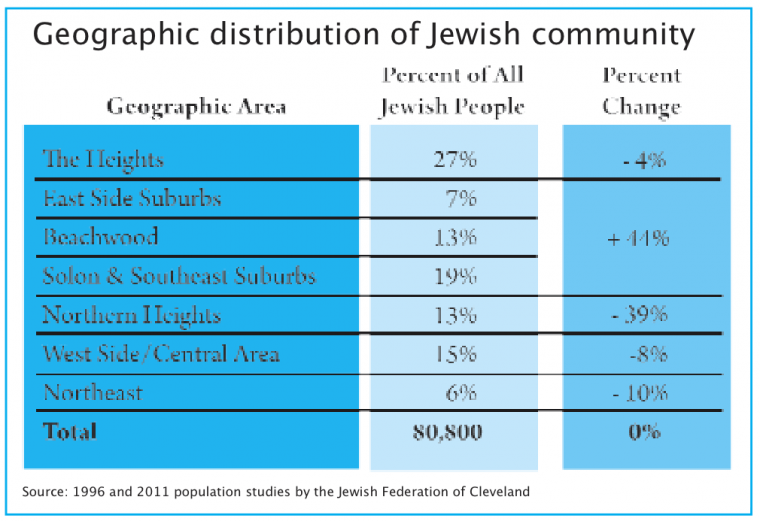 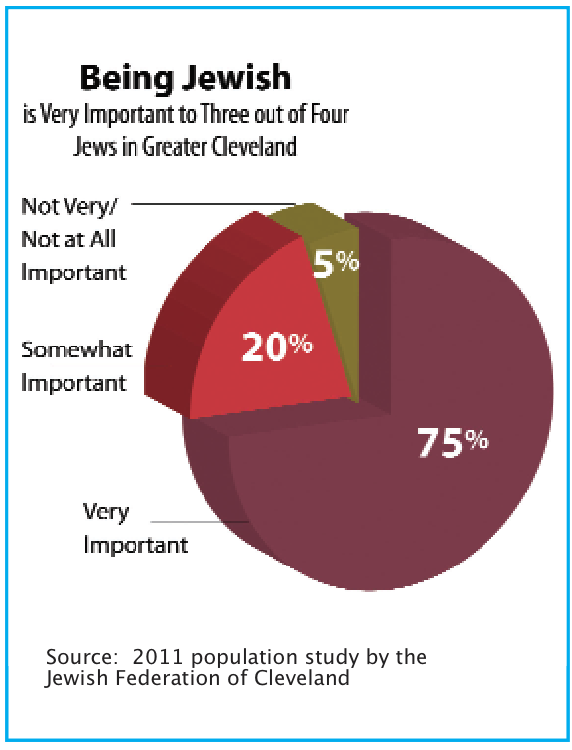 There are 80,800 Jewish people in the Greater Cleveland area. Contrary to popular belief, anecdotal data and water-cooler discussion at many Jewish agencies in town, Cleveland's Jewish population is not that far off from the 81,500 it was estimated to be in 1996.

The Jewish Federation of Cleveland recently released initial data from its 2011 Greater Cleveland Jewish Population Study, the first comprehensive study since 1996. A smaller demographic study to confirm or update the 1996 data was conducted in 2004.

Among findings from the initial 2011 data:

• 89% of children being raised Jewish have had some sort of Jewish education, as well as 43% of kids being raised "Jewish and something else"

• Of all married Jewish couples, 62% are in-married and 38% are intermarried

• The most significant geographic change in Jewish population is a 44% increase since 1996 in the area covered by about 20 East Side suburbs stretching from Beachwood and Gates Mills in the north to Solon, Twinsburg and Aurora in the south.

Initial data were released at Federation's board of trustees meeting Jan. 24. To avoid rumors and early leaks, the information was restricted to a handful of staff and volunteers until the meeting. More customized and detailed data will be available in coming months as the results are further analyzed.

"I'm surprised and delighted" at the results of the study, said Enid Rosenberg,chair of Federation's community planning committee, which oversaw the study. "We found out our Jewish community is larger and more diverse than we thought."

"It wasn't at all what I expected," said Federation board chair Michael Siegal. "It calls into question whether what we thought of ourselves prior to this was accurate. It tells us we're a more vibrant community than we thought - both the size of the community and that we're younger than we would have thought."

Federation staff and lay leaders said they are well aware the data will be met with some skepticism from a community that has believed for years that the Jewish population of Cleveland is shrinking, aging and dispersing farther and farther East. "Lots of people will probably challenge the data as not possible," Siegal said. "But it's the best look we've had at ourselves."

"The methodology was very solid and different than what was used before," Rosenberg said, noting the data was vetted by multiple groups of professionals and volunteers who work in the field of demography. "We're confident this is a good study."

The 2011 study differs from previous Federation surveys in that all data is based on how respondents self-identify. Anyone who says he or she is a Jew is counted as Jewish - regardless of upbringing, parental lineage, or level of observance. Anyone who does not identify as Jewish, even if they might have a Jewish background, was not counted.

The attention to self-identification shows "a greater sensitivity to the palette that is the American Jewish community than there was 15-20 years ago," Siegal said. "We're much more welcoming, much more attuned to sensitivities. No one should be ostracized."

• Everyone talks anecdotally about how their adult kids are leaving

To explain the larger-than-expected numbers, it cited the following signs of increase in the Cleveland Jewish community as revealed by the study:

• About a 2,200-person increase in the Orthodox population

• Approximately 2,700 survey respondents were newcomers to Cleveland (and about 2,600 of respondents' partners)

• Some 1,900 respondents were returnees to Cleveland (and about 700 of respondents' partners)

The largest cohort in the community is still the boomer generation (ages 50-64), at 29% of the population.

"It's not a surprise that Baby Boomers are going to be an issue" soon for the Cleveland Jewish community, Siegal said. "Just like the rest of America."

Where the large boomer generation will create a drain on services is not nursing homes and assisted living, Siegal noted, but in services for active retirees who still wish to live in their own homes. That will likely include home healthcare, economic support, and options for retirement activities.

Where Jews are living

So, everyone didn't all move to Solon and Twinsburg after all.

There was a lot of movement within the Cleveland Jewish community, and the areas that saw the highest increases were Solon; Southeast suburbs that included Aurora, Hudson and Twinsburg; Beachwood; and East Side suburbs like Moreland Hills, Orange and Pepper Pike. The Heights area (Cleveland, Shaker and University heights) continues to hold a significant segment of the population at 27%, down 4% from 1996.

"We've moved, but we're not spreading out," Rosenberg said. "That speaks really highly of the Jewish community - that it's important to us to be part of the community."

Jewish populations in the West Side and central Cleveland area and in the Northeast (Chardon, Chester, Willoughby) remain small, and these areas saw decreases since 1996. The most significant loss - 39% since 1996 - was in the group of suburbs Federation labeled Northern Heights, which includes Highland Heights, Lyndhurst, Mayfield and South Euclid.

Fifty-seven percent of the current population was born in the Greater Cleveland area; another 10% was born elsewhere in Ohio. Immigrants from outside the U.S. constitute 8% of the community.

Detailed data on migration away from Cleveland is forthcoming. For now, Federation can report that the number of people who say they plan to leave Cleveland in the next three to five years is down 4% from the 1996 study.

"We were not as open to children of mixed marriages" when the previous population study was conducted in 1996, Siegal acknowledged. "We figured they were lost."

Federation leaders were "pleasantly surprised" to discover in the 2011 study that a notable percentage of children of interfaith marriages are engaged in some way in Judaism or the Jewish community, Siegal said. It presents a "challenging but positive" opportunity.

Federation has identified as an outreach opportunity the 8,600 people (including 2,400 children) who describe themselves as "Jewish and something else." That group is not exclusively from intermarried households, but includes many respondents from unmarried households.

Even though affiliation with Jewish agencies is down, the community voiced a strong connection to Judaism in the 2011 study:

"Cleveland is unique in its connection to Israel," Siegal said. "Actually, that's not a surprise." The survey revealed that 44% of respondents say they are "very attached" to Israel, while another 42% say they are "somewhat attached." Forty-seven percent of respondents have either visited or lived in Israel.

The high numbers of adults under 34 who express a strong connection to Judaism or Israel have led Federation to identify them as another cohort presenting opportunity for outreach.

Over half of all Jewish households say they were negatively impacted by the economic downturn, with the boomer generation hit hardest (those specific numbers will be available after further analysis of data).

Those affected by the cost of Jewish living have also been identified as a group to whom there is opportunity for a new approach to programming and outreach.

Despite the economic concerns expressed, 88% of Jewish households report making a charitable gift to either the Jewish or general community.

The population study is "a lens to strategize priorities in programs" for Federation and for Jewish agencies and synagogues in Cleveland, Rosenberg said.

"It opens up a whole new set of questions - how do we provide services?" Siegal said. "At least we know now who we're providing them for."

After release of the initial data, Federation intends to meet with various Jewish human service and education agencies, day schools and synagogues throughout February, Rosenberg said. As more data become available by the end of March, Federation hopes to schedule individual meetings with each agency to "slice and dice" the data most needed by the agency to help it better understand the constituency it serves, she said.

"It's exciting to look at the future with this knowledge," Siegal said.

Among the reasons JPAR was chosen: it successfully implemented similar Jewish population studies in Baltimore and New York City, and it was the only firm that used cell phone numbers in collecting data. Previous Federation studies only drew data from calls made to landlines.

Including cell phone numbers in the survey process ensures a more accurate picture of the Cleveland Jewish community, as many people today have given up their landlines and only use cells. Cell-only use is also most common among younger people, ensuring better representation of and data from younger age cohorts.

"We're gathering part of the community in the study that we weren't touching before," said Enid Rosenberg, chair of Federation's community planning committee, which oversaw the study.

After it was collected and analyzed, the 2011 study data was vetted repeatedly by a variety of experts from outside JPAR, including some from Gallup who were engaged by a member of the volunteer committee overseeing the study.

Calls were made to more than 85,000 randomly selected numbers, including 11,000 cell phones. Over 7,300 answered and participated.

The list included many phone numbers of non-Jewish households which were eliminated after a 3-4 minute screener interview. Some 1,044 respondents in Jewish households were asked another 18-20 minutes worth of questions. It was important to call general numbers to determine the incidence of Jewish households and individuals within the Greater Cleveland population, Federation staff explained.

The study is not perfect, Federation president Stephen H. Hoffman acknowledged. "It's hard to count Jews," he said. "We did the best job we could do, based on the experts in the field. It's the state- of-the-art in Jewish census-taking."

The study was funded by the Federation, the Cleveland Foundation, The Treu-Mart Fund and The Mt. Sinai Health Care Foundation.

www.cjn.org - Cleveland Jewish News; and www.cjn.org/archive, the repository of everything printed in the CJN since 1964 (digital subscription required)

www.twitter.com - use #CleJews for your thoughts about the study, and follow CJN at @CleveJewishNews

What do you think about the population study? What do the statistics mean for Jewish Cleveland's future? How should the community react?

Moving beyond the numbers

The numbers are in. Now what?