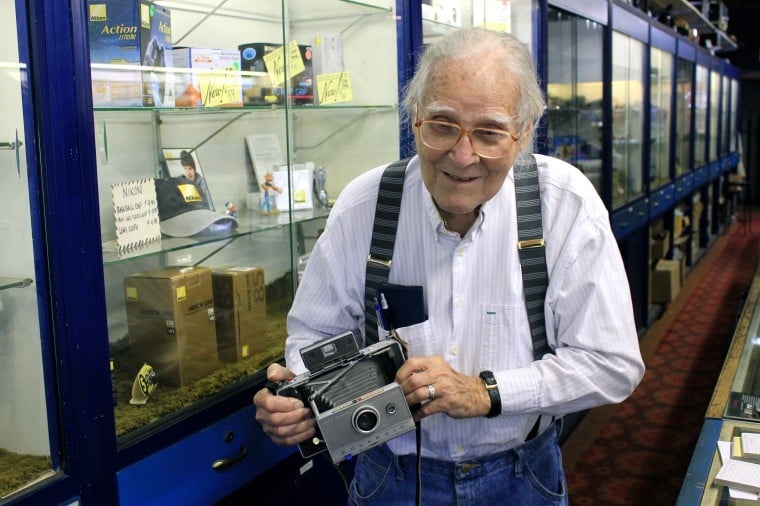 Howard Foxman handles a 1960s camera in August 2012 at Loomis Camera Co. in Elyria, before closing the store that year. 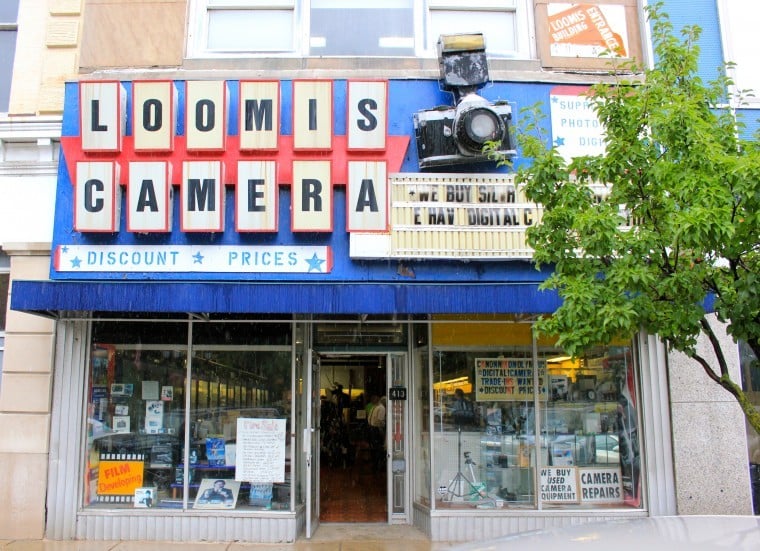 The Loomis Camera sign was the subject of much debate in the 1990s.

Howard Foxman handles a 1960s camera in August 2012 at Loomis Camera Co. in Elyria, before closing the store that year.

The Loomis Camera sign was the subject of much debate in the 1990s.

Howard Foxman will be the first to tell you he’s not a photographer.

“I’m not a camera person,” said the 91-year-old, plainly, as he leaned back in his office chair and folded his hands. “I enjoyed being in business, I didn’t enjoy photography.”

But it’s the photography business that Foxman was particularly successful at for nearly three-quarters of his life – most notably as the owner of The Loomis Camera Co., which occupies a small storefront adjacent to Ely Square in downtown Elyria.

His store is a treasure trove for Northeast Ohio shutterbugs. Foxman stocks top-line digital cameras but also carries cameras from years gone by, including a German film-plate camera from the early 1900s. His shelves are stocked with the latest must-have accessories but also decreasingly used rolls of film and dark room supplies.

But in a few weeks, after keeping his door open to the community for 62 years, Foxman will lock up his camera shop for the last time, having deciding to close his business for good due to the repercussions of a fire that erupted in a nearby store.

“It was very good to me for many years,” said the soft-spoken Foxman. “This is the inglorious ending to a glorious business.”

Foxman got into the camera business as a young man returning from World War II, where he served as a member of the U.S. Army Air Force. In 1945, he returned to Youngstown, his hometown, where his photographer friend Carl Rosenberg proposed they open a studio together.

Foxman felt that venture wouldn’t be profitable, but not long after, he stuck with photography and started to sell cameras from a 20-square-foot space he leased at Klivan’s Jewelry Store, a space he maintained for five years.

“That was the beginning of my camera business,” he said, adding that by the end of those five years, “I was doing more business than the jewelry store.”

As Foxman’s business succeeded, he started to buy several small stores throughout Northeast Ohio – one of which was the R.F. Loomis Co., which he purchased from Ed Prentke in 1950.

Before long, Foxman realized he enjoyed this new business so much that he decided to move from Youngstown to Elyria.

“I liked the little town,” he said. “I thought it had good things for me, so I moved here and made this my main store.”

After seven years of occupying the Loomis company’s original storefront at 134 Middle Ave., Foxman moved his business a few blocks north to its current location at 413 Broad St.

Through the ’50s and ’60s, Elyria’s population grew by tens of thousands – buoyed by manufacturing jobs and the post-war baby boom – making downtown Elyria a bustling center of commerce.

“At Christmas, we used to have flash bulbs piled up to here,” said Foxman, raising his hand up to his eye level.

Foxman built his business not only around shoppers coming in off the street but also by working with local schools, newspapers, businesses and churches, he said.

That business model helped Foxman survive discount stores opening nearby in downtown Elyria, the subsequent construction of strip plazas and big-box stores in outlying areas, and even the opening of Midway Mall in 1967, which dramatically altered the local retail landscape at the time.

“I was thinking about moving out there (after the mall opened), but they wanted too much rent,” he said. “I got along without them, and I’m certainly glad I did. ... I’m not sorry. It’s falling apart down there now.”

During his time in Elyria, Foxman said he enjoyed working relationships with fellow Jewish businessmen, a group that included the owners of about four downtown shops and three downtown theaters, he said.

“When I moved into town, I was a newcomer,” Foxman said. “They invited me to join (Temple B’nai Abraham in Elyria), and I joined for quite a while.”

However, in 1962, Foxman moved his family to Shaker Heights to be closer to Northeast Ohio’s Jewish community, said his daughter, Sherri Foxman, owner of Party411 in Warrensville Heights.

Foxman drove from Shaker Heights to Loomis Camera every day before moving his family back to Elyria in 1977, his daughter said.

Sherri Foxman is a former employee of Loomis Camera. When she was 6 years old, her father started her behind the register counting out change to customers, and as she grew older, she waited on customers.

“I loved being here,” she said. “I felt important.”

One of Elyria’s remaining Jewish-owned businesses is Shane Furniture, which Julius Schoenhiutt opened in 1963 in Lorain before moving to Elyria in 1971, said his son, Adam Schoenhiutt.

“They’ve had a very good relationship, and they’ve seen each other over the years,” said Adam Schoenhiutt of his 76-year-old father and Foxman.

Controversy swirled around Foxman throughout the mid-1990s as he battled city officials who sought to take down Loomis Camera’s iconic sign – which over the years has featured various oversized cameras to draw customers’ attention – in accordance with an ordinance passed in 1991 to prohibit signs from protruding from downtown buildings.

The debate played out at city council meetings and on the front pages of local newspapers. Foxman sought to exempt his sign – which by then had been up for more than three decades – from the ordinance, and even went so far as to collect about 2,000 signatures from Elyrians that would’ve put the issue before voters.

Due in part to overwhelming public support, it never came to that, and Foxman’s sign remains to this day.

“A lot of people called and told me, ‘Anything we can do to help keep the sign ...,’” he said. “I fought because I thought they were being unreasonable. ... We finally won.”

Foxman hasn’t decided what he’ll do with his sign when he closes his store, though he said a museum in Cincinnati has expressed interest in acquiring it.

In recent years, business started to decline. Foxman said that the recession took its toll on business – “more people are out of work, so fewer people can afford to buy a camera” – and he admits that the proliferation of camera phones has resulted in fewer potential customers.

One adversary proved itself more formidable than all the others: the Internet, to which he said customers have increasingly turned despite his competitive prices.

Foxman also said there’s less of a market for collector’s items, some of which he amassed as he bought up those businesses decades ago.

“As the years went on, we had a lot of camera collectors buying from us,” he said. “But young people don’t collect as much.”

The final blow came in the early morning hours of June 13, when a fire erupted at 401 Broad St., according to media reports. The blaze resulted in smoke damage to Foxman’s store, he said.

The insurance company overseeing building repairs wanted to move Loomis Camera’s entire inventory out of the store for a month so it could attend to the damage, after which it would move the merchandise back in.

Instead of enduring that process, Foxman decided to close his store for good.

A final date hasn’t been set, but it’s likely to be about Oct. 1. As of late August, following a storewide sale, Foxman said only about 35% of his inventory remains.

Moving forward, Foxman plans to use the Internet to his advantage. He and Peters have already successfully executed about 4,000 sales on eBay, and Foxman said he intends to continue those efforts once he’s closed the store.

“I never imagined myself retiring,” he said. “I enjoyed what I was doing. Why would I want to retire?”

In the end, Foxman said he doesn’t regret closing the store that’s been a part of his life – and the Elyria community – for so many years.

“I’m not unhappy about going out,” he said. “It’s getting tougher for mom-and-pop shops to survive. I managed to do it because I had a good backing of customers and was a good businessman.”