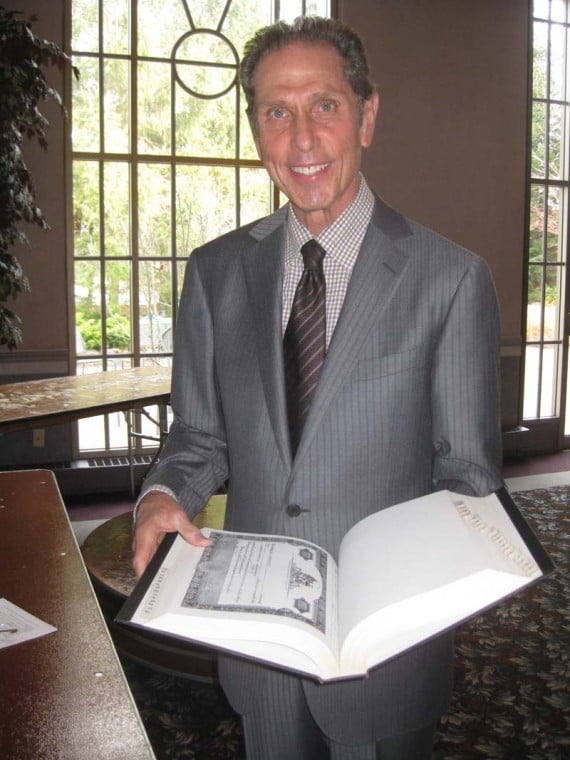 Bob Hurwitz with a copy of his “bible,” which contains information about the company’s first stock offering. 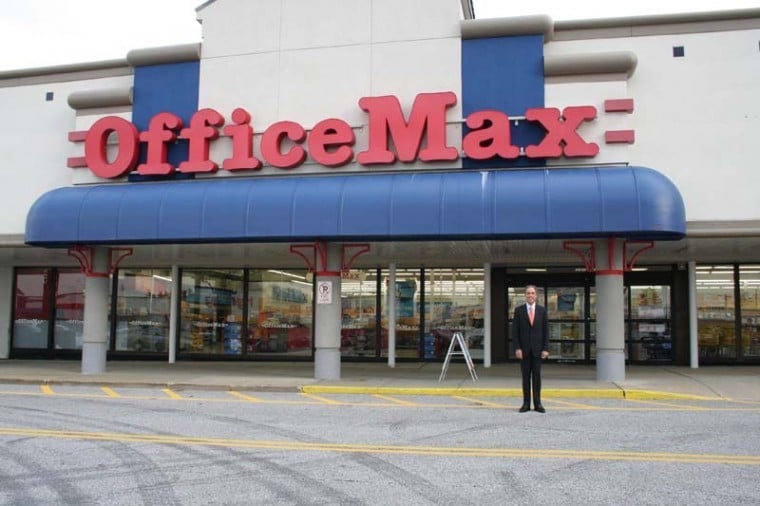 Bob Hurwitz at the first OfficeMax store that opened on July 5, 1988, at Golden Gate Plaza in Mayfield Heights.

Bob Hurwitz with a copy of his “bible,” which contains information about the company’s first stock offering.

Bob Hurwitz at the first OfficeMax store that opened on July 5, 1988, at Golden Gate Plaza in Mayfield Heights.

Although OfficeMax Inc. has sold tens of millions of black binders over the past 22 years, there is one so special that OfficeMax founder Bob Hurwitz calls it his “bible.”

This slightly worn heavy black binder contains documents prepared to interest investors in the entrepreneur’s early vision of what would become known as OfficeMax, a mega-office supply superstore.

That binder and the story of how it took many people to help build the business will be the topic of “Launching a Billion-Dollar Company: The Story of OfficeMax,” a seminar for the Jewish Federation of Cleveland’s Young Leadership Division Tues., Nov. 22, at the LaunchHouse in Shaker Heights.

Chuck Ratner, chairman of Forest City Enterprises, who was an OfficeMax investor and whose company was the first store's landlord, will introduce Hurwitz, whose speech will focus on the theme "Success Has Many Parents."

"My goal is to show that without the support of Cleveland's Jewish community, there would never have been an OfficeMax," Hurwitz said.

In late 1986, Hurwitz, then 44 and co-owner of a national distribution business, Professional Housewares Distributors (PHD), said he became aware of the potential for mass distribution of office supplies after learning it was a multi-million dollar industry.

"When I researched those figures, there was no doubt about the enormous potential of that market," he said.

Staples Office Supplies had opened its flagship store in Brighton, Mass., and Office Depot had opened its first store in Florida. Hurwitz said he traveled to Massachusetts and Florida in early 1987 to see how both of these fledgling office supply stores were doing business.

"I had an epiphany during those visits: These stores were basically warehouses with a cash register, and I knew the warehousing business," he said. "They bypassed wholesalers and distributors like me and passed on the savings to their customers in discounted prices."

Hurwitz spent the balance of the year "doing spade work," he said. He continued to run facts and figures and work out the logistics of running a large-scale business. To gain an insider's view, Hurwitz said he bought a small piece of F.W. Roberts, a Solon-based contract office furniture dealer and contract stationer.

Hurwitz said that on July Fourth weekend in 1987, he began to draw up a plan while he and his wife were vacationing in Chautauqua, N.Y. He found a comfortable spot on the porch of the Athenaeum Hotel and spent an entire afternoon filling up legal pads. As a placeholder, he called his new business "Margins: The Office Supply Superstore."

He envisioned a large-box business supplies discount store that was an attractive place to shop, offered professional and friendly service, and had lower prices than those in office supply retail shops.

Also at Chautauqua that weekend was Marc Morgenstern, who was on the executive committee at Kahn Kleinman Yanowitz & Arnson LPA. Morgenstern and law partner Bennett Yanowitz, a close family friend of Hurwitz, had handled Hurwitz's legal work for years.

"Marc joined me on the porch, and I showed him my business plan, and he quickly realized the potential," said Hurwitz. "My next step was to find investors."

Morgenstern said he was so vested in the idea that he devoted every Sunday evening for the next five months to helping Hurwitz refine the concept.

Hurwitz said he started building an investor pool with "low-hanging fruit." His late father-in-law Myron Nickman committed $500,000, and his PHD partners also agreed to invest a sizeable amount in Hurwitz's vision. "They were afraid to say no to me," he quipped.

By Oct. 1987, Hurwitz said word about the idea sparked calls from other potential investors. "Things were looking up until Oct. 19, when the stock market took a nosedive," he said. That day the Dow plummeted a record 508 points, a 22.6% drop, and so did interest in the project. Hurwitz said one person who had planned to invest almost $2 million got cold feet and bailed.

"What could have been the worst of times became the best of times, thanks to my loyal Jewish supporters at Kahn Kleinman," said Hurwitz.

Days following the stock market downturn, Hurwitz received a call from Morgenstern. "Marc greeted me in his office with his feet on his desk and said, ‘My law partners and I are prepared to invest $300,000 to get your business going, because we believe in you,'" Hurwitz said. "That was the turning point for me."

From then on, Hurwitz said he had the confidence and critical financial backing to attract additional investors. "It was not always easy," he said, noting lots of people turned him down. But the Pepper Pike resident never stopped selling his idea to friends, family and others.

"What an exciting time that was," said Millie Borowitz, vice president of administration for PHD for 15 years and an early investor in OfficeMax. "I am eternally grateful as to how things turned out."

By early 1988, Hurwitz said he was continuing to line up investors and was ready to bring on someone to handle the company's day-to-day operations.

Hurwitz said his PHD partner Marc Fallenberg suggested Michael Feuer, who had just left Fabri-Centers of America (now Jo-Ann Fabric and Craft Stores) as senior vice president. Hurwitz began meeting with Feuer, and at one of their early meetings, they brainstormed about the name of the company and agreed on OfficeMax, Hurwitz said.

Feuer's employment agreement to become president and COO became effective April 1, 1988. Hurwitz remained executive chairman and CEO. Feuer said he invested $20,000 of his own money in the company. Both men would become recognized as co-founders.

"Michael jumped right in, and I was very impressed with his hard work and discipline," said Hurwitz.

"Bob was a good partner and a fine collaborator," Feuer said. "God bless him; he is a great guy."

In looking for a location for the first store, sites were set on Golden Gate Plaza in Mayfield Heights. "It was a bull's-eye location right off east/west and north/south highways," Hurwitz said.

But the 22,500-sq.-ft. Golden Gate space, owned by Forest City, had a tentative lease with two other interested parties, Hurwitz recalled, so he contacted Ratner and told him, "I need that store."

"To the best of my knowledge ... the person who sold us on the idea was Bob Hurwitz," said Ratner. "I had tremendous confidence in Bob, based on what he had done at PHD. He was one of our Forest City suppliers, and I used to argue with him about the price of toasters."

Architect Gerald Herschman was hired to design the original OfficeMax store. The Golden Gate store opened on July 5, 1988. With very little advertising, it did $6,400 sales on its first day, Hurwitz said.

"I remember the thrill of that opening as all the investors and their families walked through the store," said Morgenstern. "When something goes from a plan on a porch, to money raised, to investing in a site, to a store opening, and then customers lining up ready to buy - it is way cool."

In scouting locations for the next two stores, Hurwitz turned again to his Jewish community friends, businessmen and real estate owners Bob Stark and Marc Glassman.

Less than 12 months after the Golden Gate opening, OfficeMax was operating 13 stores in Ohio and Michigan with annual sales of $13 million, Hurwitz said.

Hurwitz left the company in 1993. Feuer said that in subsequent years, the company went public with what he called the largest initial public offering in retail chain history at the time. It grew from a small regional chain into an international powerhouse with over 1,075 stores and sales of $5 billion, Feuer said.

Bob Hurwitz begins looking into the idea of creating an office supply superstore and finding potential investors among his Jewish community friends.

OfficeMax grows to more than 1,000 stores.