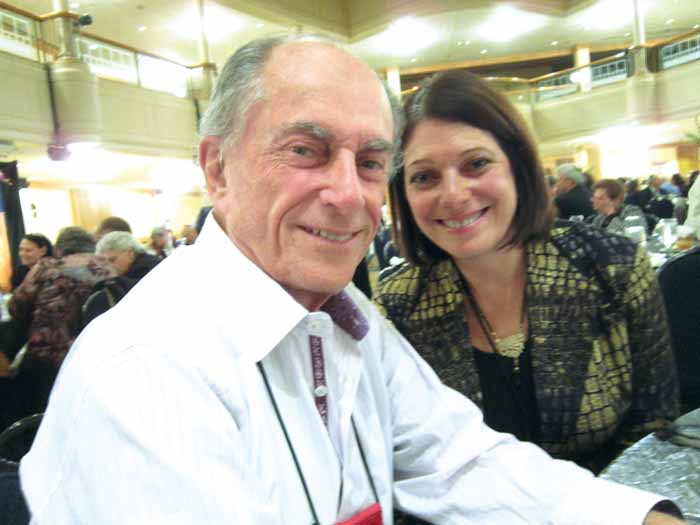 Allan Hall and his daughter, Lisa Michel, believe in perpetuating the lessons of the Holocaust. 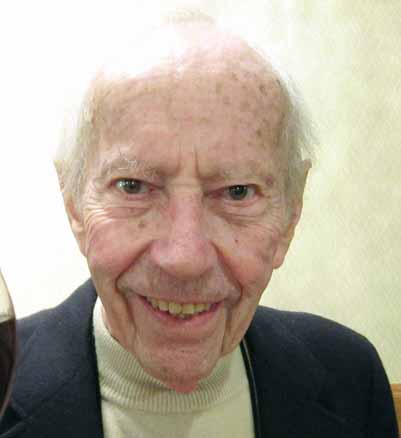 Allan Hall and his daughter, Lisa Michel, believe in perpetuating the lessons of the Holocaust.

Close to 500 people from all over the world visited Cleveland last weekend, sharing memories and celebrating survival. The 24th edition of this occasion had a long title: World Federation of Jewish Child Survivors of the Holocaust and Descendants. It was a time to share, to commiserate and to perpetuate. It was a time to rejoice, too.

Many attendees were in their 80s, a few in their 90s. Some were children, in their single digits. The notion of bridging generations was key, because this was in a singular and profound sense a family affair aiming to honor longevity, continuity and persistence. Geared toward first-generation Holocaust survivors and their second- and third-generation spouses and families, it featured panels and discussions about all aspects of the Holocaust, in which 6 million Jews perished.

Handwritten notices on a bulletin board in the lobby on the mezzanine of the Renaissance Cleveland Hotel begged anyone with information on a relative missing since the depths of World War II to come forward. Tables lining the periphery offered literature on Holocaust-related organizations and other sources of information. Meeting rooms on the fourth floor featured speakers on topics spanning the impact of survivors’ aging on the second and third generation; living with a survivor; storytelling; memoir writing; educating people about the Holocaust; and intermarriage between survivors and those not connected to the Shoah.

The conference was both clearinghouse and catharsis.

There were services, both Orthodox and Egalitarian. There were movies. There was circle dancing and singing. There was so much networking someone partway through telling a story might have to interrupt to catch up with someone he hadn’t seen in decades.

There was a candle lighting Sunday night.

There was community and, at least in intent, healing.

As Morry Weiss, a child survivor and co-chair of the event with Rose Gelbart, said, the conference gave people an opportunity to “resolve very deep psychological issues.” He also noted that of the approximately 500 who attended between Oct. 26 and Oct. 29, 50 were from Northeast Ohio.

Some sessions were open to all. Others were limited to survivors, others to descendants, yet others to spouses and partners. As one attendee observed, sharing one’s thoughts on sensitive subjects such as living with a survivor might hurt the feelings of the survivor.

Leo Silberman, a Pepper Pike resident who with his brother, Dovid, survived the forced labor camp Plaszow, near Krakow, Poland, attended. Silberman is 87. This was his first such conference. In an Aug. 24, 2007, profile, Silberman told the Cleveland Jewish News he felt lucky to make it out of Plaszow and later, Buchenwald. President of the Kol Israel Foundation, he often speaks of the Holocaust; two years ago, he said, he gave an address at the Ohio Statehouse in Columbus on that very subject on Remembrance Day.

Others had attended an earlier version, like Curt Lowens, a Los Angeles resident and participant in a panel on Jews rescuing Jews. Born in East Prussia in 1925, Lowens cuts a dashing figure. An actor who has portrayed Nazi soldiers on TV and in film, he considers himself extraordinarily lucky, he said before an Oct. 28 dinner honoring the local Jewish community.

Lowens is the son of a prominent lawyer. The family lived in Berlin in the late ’30s and, when they decided to leave for the U.S., went to Rotterdam to board a ship. The Germans invaded Holland the day they were supposed to leave, so Lowens wound up in Westerbork, a Dutch camp the Nazis used as a collection point from which to distribute Jews to other camps. Because his identification papers bore a stamp that said, “postponed for deportation,” he was instead sent back to Amsterdam. (His father put that stamp in the ID, he said.) “The commandant with his German efficiency stuck with it.”

A combination of good fortune and timing found Lowens under the protection of the British army, which sent him back to Germany on Oct. 17, 1945, to “participate in the triumph over Nazi Germany.

“I consider myself extremely lucky and feel that it is now part of my life to tell the story,” Lowens said, noting he never was in a death camp.

Others were not so consistently upbeat, like Allan Hall, a Miami Beach, Fla., resident attending the conference with daughters, Lisa Michel, of Solon and Julie Hall, of Atlanta.

“We survivors are damaged people,” he said. “Injured – it’s a wound that you cannot see.”

At the same time, he said, “You cannot be a survivor unless you were lucky, and there are no ordinary stories. Every story is unique.”

What such get-togethers must do is keep the memory of the Holocaust fresh so its lessons never die, said Hall, born Adam Janusz Horowitz in 1935. Although he was never in a death camp, Hall said he and his family hid from the Nazis for years and at one point, he was in a crowd at an Umschlagplatz (German for collection point) waiting for a train to take them to Treblinka. “I would characterize myself as a happy person,” he said.

“The key issue is to gently pass the knowledge on to make our history a living history and our lessons current lessons,” said Hall. “We get old in our body. But when we get old in our minds, that is dangerous.”