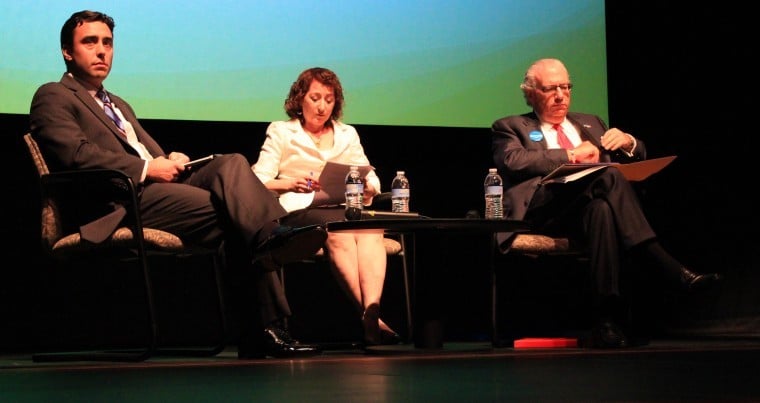 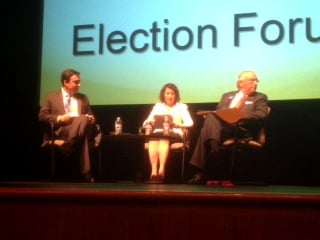 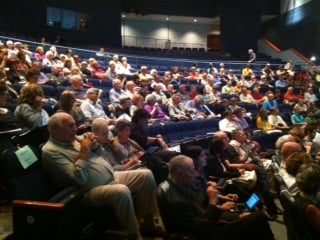 More than 200 guests gathered in the performing arts center of the Cuyahoga Community College Eastern Campus for the CJN Foundation/Tri-C political forum, presented by The Israel Project.

More than 200 guests gathered in the performing arts center of the Cuyahoga Community College Eastern Campus for the CJN Foundation/Tri-C political forum, presented by The Israel Project.

More than 200 guests gathered inside Cuyahoga County Community College eastern campus' performing arts center for a political forum that asked top-level Democratic and Republican supporters, “Where does the next president stand on key issues for the Jewish community?”

The forum was sponsored by the CJN Foundation, a nonprofit organization that supports the Cleveland Jewish News’ mission through education, internships and the CJN Archive, and by The Israel Project, a nonprofit educational organization that provides information about Israel and the Middle East. The event was presented in partnership with Cuyahoga Community College’s eastern campus.

In his opening statement, Pollak conceded that there were “a few bright spots” when it came to the Obama administration’s foreign policy but criticized the president’s approach with Iran.

“Iran has six times more enriched uranium today than when Obama took office,” Pollak said. “I don’t question Obama’s motives in wanting to bring peace to the Middle East … but we’ve seen four years of a very misguided approach on all of these domestic and foreign policy issues.”

Solow said Obama has held true to promises he made regarding Israel when he came into office.

“He said Israel’s security would be at the top of his agenda; it would be sacrosanct,” Solow said. “He also promised that irrespective of any policy differences that might develop between Israel and the US, he would never threaten Israel, he would never force Israel to take any kind of position, arrangement or deal in a negotiation that Israel did not itself freely want to take.”

Pollak criticized the current administration for not being “serious” enough and said Romney’s approach to foreign politics would fundamentally differ from Obama’s.

“With all respect to Noah’s opening argument, he didn’t tell you one thing about what governor Romney would do if he were president of the United States,” Solow said. “What he implied is (the country) would return to the old policies of (former) President Bush. I don’t think that that recipe proved to be a success for America either domestically or in terms of foreign affairs.”

Throughout the discussion, Solow praised Obama’s versatility as a leader.

“This president is not somebody who only plays one tune,” Solow said. “We’re going to have to use all elements of American power – soft power, hard power, engagement, diplomacy, all of it – in order to be successful.”

The economy was also discussed, with Pollak claiming the Republicans and Democrats exhibit a “basic fundamental difference in economic outlook.”

Pollak said the Romney/Paul Ryan ticket “takes more seriously that we have to cut spending and the growth of the government,” adding that a reduction in the amount of government spending would be critical to a successful economy.

Solow also brought up the surplus former President Bill Clinton left Bush when Bush took office in 2000 and said tax cuts and “massive spending” dug an eight-year hole that "the country was left to crawl out of."

In their closing remarks, each party surrogate took a different approach.

Pollak acknowledged what he called a primarily pro-Democrat audience and urged Democrats to let their own party know how strongly they feel about pro-Israel relations and policies.

Solow said Obama was the candidate most prepared to lead the country out of its economic situation.

“We’ve taken major steps to accomplish that in the last four years, and with your help, we’ll get the job done in the next four years,” Solow said.

June and Ken Kiner, senior citizens living in Willoughby Hills and registered Democrats, said they were disappointed Noah Pollak did not give more information on Mitt Romney’s views.

“The other man (Alan Solow) was more specific than Noah,” said June Kiner. “He talked about the future. I did like that they ended on the same note – pro Israel, which was magnificent.”

Marlene Siegal, 69, of Beachwood, said she was undecided about the presidential candidates and was looking for insight. After the program, she said she still needed to do more research.

“I don’t think they had as good a representative for Romney that they had in Alan. He was so eloquent.”

Sandy Asnien, 79, an independent voter from Solon, said he “didn’t find substance in what Romney was going to do.

“If this is the only presentation, I’d have to go Democratic,” he said. Referring to the Republican claim that the country needs a businessman, Asnien said he saw positive results in President Barack Obama’s rescue of the auto industry.

Considering himself a conservative, Mel Kroot, 71 of Mayfield Heights, said, “No one mentioned the $5.5 trillion that has been added to the deficit.”

Marilyn Kapucinski of South Euclid questioned whether Obama had ever visited Israel during his presidency. Romney visited the country recently. She said she feels Obama "has never been for the Jewish people" and this year, she is voting Republican.

Ellen Lazarus, a Democrat from Shaker Heights, said she felt Pollak was "ineffective," but that he didn't have much to work with.