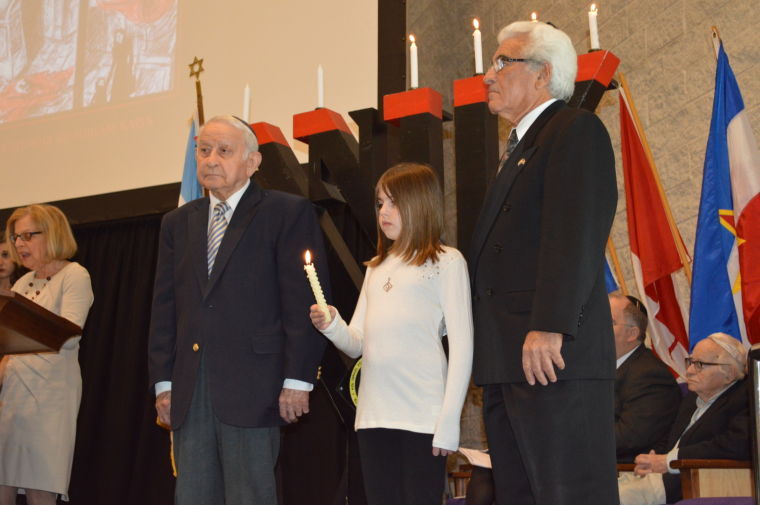 Philip Green, from left, who lit one of the six memorial candles, Alexandra Steinberg-Kucmanic, 11, of Mayfield Heights, and Avi Goldberg of the Kol Israel Foundation participate in the Yom Hashoah V’Hagvurah commemoration April 27 at B’nai Jeshurun Congregation in Pepper Pike. 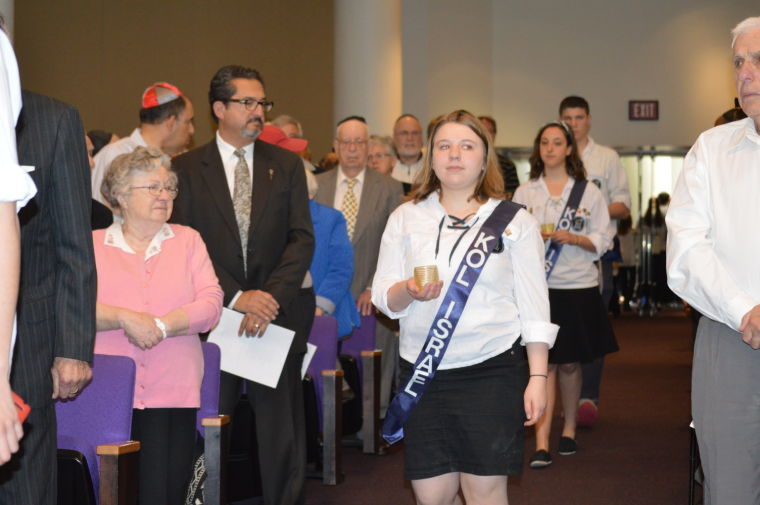 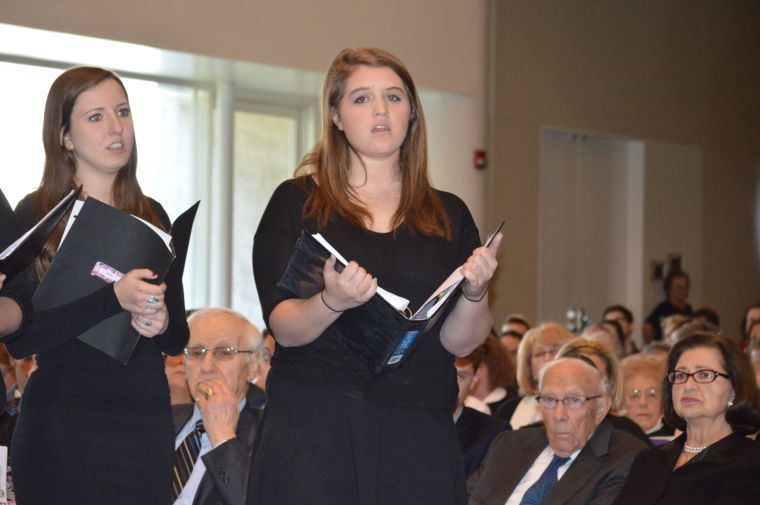 Jenna Fox, left, looks on as Talia Laserson sings a solo. The girls are students at Fuchs Mizrachi School in Beachwood.

Philip Green, from left, who lit one of the six memorial candles, Alexandra Steinberg-Kucmanic, 11, of Mayfield Heights, and Avi Goldberg of the Kol Israel Foundation participate in the Yom Hashoah V’Hagvurah commemoration April 27 at B’nai Jeshurun Congregation in Pepper Pike.

Jenna Fox, left, looks on as Talia Laserson sings a solo. The girls are students at Fuchs Mizrachi School in Beachwood.

The community has a responsibility to keep stories of the Holocaust alive and ensure the world remembers the beauty of what Jewish life was like before World War II, according to Rabbi Stephen Weiss.

“Never before has it been more important for us to remember those 6 million individuals as real people, and not just as numbers, because we are quickly approaching a time when there will no longer be in our midst Holocaust survivors to tell the stories themselves,” the senior rabbi at B’nai Jeshurun Congregation told a crowd of about 700 who gathered at his synagogue in Pepper Pike on April 27 for Yom Hashoah V’Hagvurah, or Day of Remembrance of the Holocaust and Heroism.

Weiss said he was deeply moved by the program, which was coordinated by the Kol Israel Foundation and the Jewish Federation of Cleveland.

“I’m gratified by such a large turnout. It’s important for us to keep telling stories of these communities, both the victims and the survivors, or else they will fade from memory,” Weiss told the Cleveland Jewish News after the program.

Graphic novelist Miriam Katin, who was born in Hungary during World War II, served as the guest speaker. She discussed her first full-length graphic novel, “We Are on Our Own,” which tells the story of how she and her mother escaped the Nazi invasion of Budapest after faking their deaths.

“What I tried to do with this book is really force myself into thinking about the situation and how it must have been for my mother,” said Katin, who served in the Israel Defense Forces as a graphic artist from 1960 to 1963.

“I dedicated this book to my mother who taught me to laugh and to forgive,” Katin said. “I did not do too well with forgiving, but my mother and I, we laugh it off.”

World War II veteran Maury Feren lit a special memorial candle and Annie Kitral lit a Righteous Among the Nations candle in honor of her mother, Anna Tkacz, who hid her Jewish neighbors during the war.

“We must never stop saying, ‘never again,’” said Cheryl Davis, chair of the community relations committee for the Federation. “We must be unrelenting in our efforts to prevent atrocities against humanity everywhere. One way we can do so is by sharing memories of the Holocaust, both of those who survived and those who perished.”

The program also included a March of Generations by students from local youth groups and schools and a performance by HaZamir Cleveland, the local chapter of the International Jewish High School network of choirs. Winning essays from the 2014 Creative Arts Awards were presented. Eighth-grader David Gold of Gross Schechter Day School in Pepper Pike won first place in the sixth- to eighth-grade category, while 10th-grader Ariana Ehrhart of James A. Garfield High School in Garrettsville was the winner of the ninth- to 12th-grade division.

This was the first time the annual event was live-streamed on B'nai Jeshurun's website.