Aleksander Shul at 4380 University Parkway has been blocked from operation by the city of University Heights. 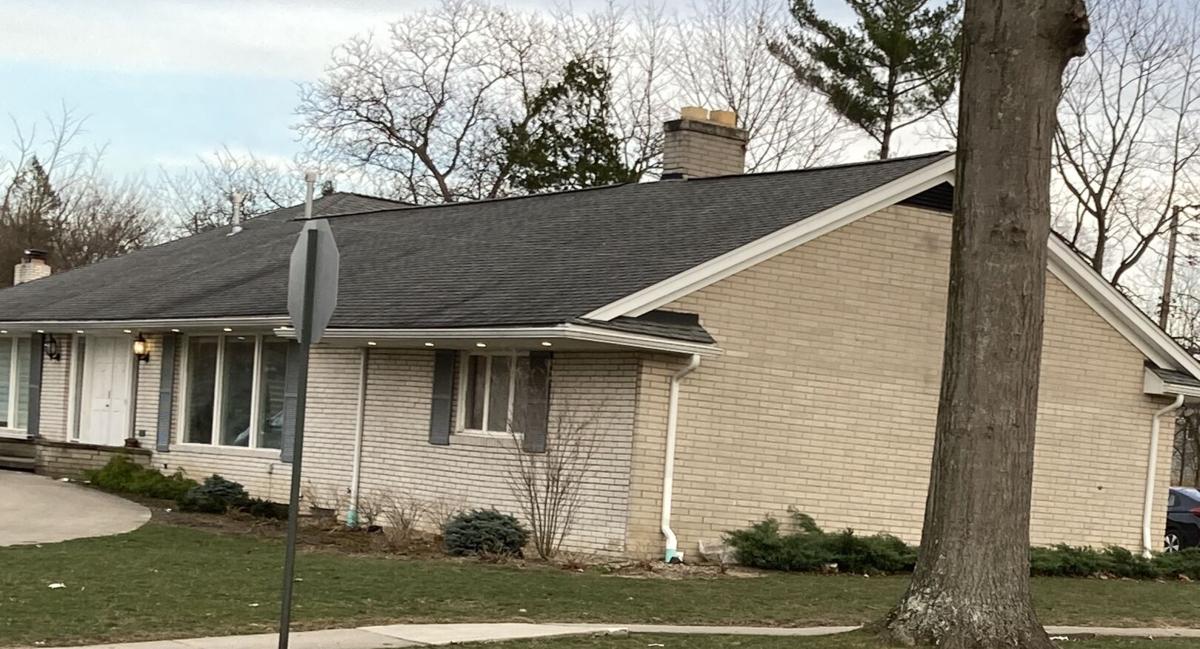 The city of University Heights has blocked operation of the Aleksander Shul at 4380 University Parkway through a cease and desist order.

Aleksander Shul at 4380 University Parkway has been blocked from operation by the city of University Heights.

The city of University Heights has blocked operation of the Aleksander Shul at 4380 University Parkway through a cease and desist order.

The city of University Heights has blocked operation of the Aleksander Shul at 4380 University Parkway with a cease-and-desist order.

The Feb. 19 order came after the city filed a housing non-compliance case in Shaker Heights Municipal Housing Court in September 2019, and a subsequent public hearing with negotiations extending into 2020.

“The city will not tolerate any use of the premises as a shul without a special use permit,” University Heights Law Director Luke McConville of Nicola Gudbranson & Cooper, LLC in Cleveland wrote. “If operation of the premises as a shul do not cease immediately, the city will have no choice but to consider what legal options may be at its disposal.”

The order was addressed on the document to Schnior Denciger, Haram Schneur Zalman Danziger and University Realty LLC. 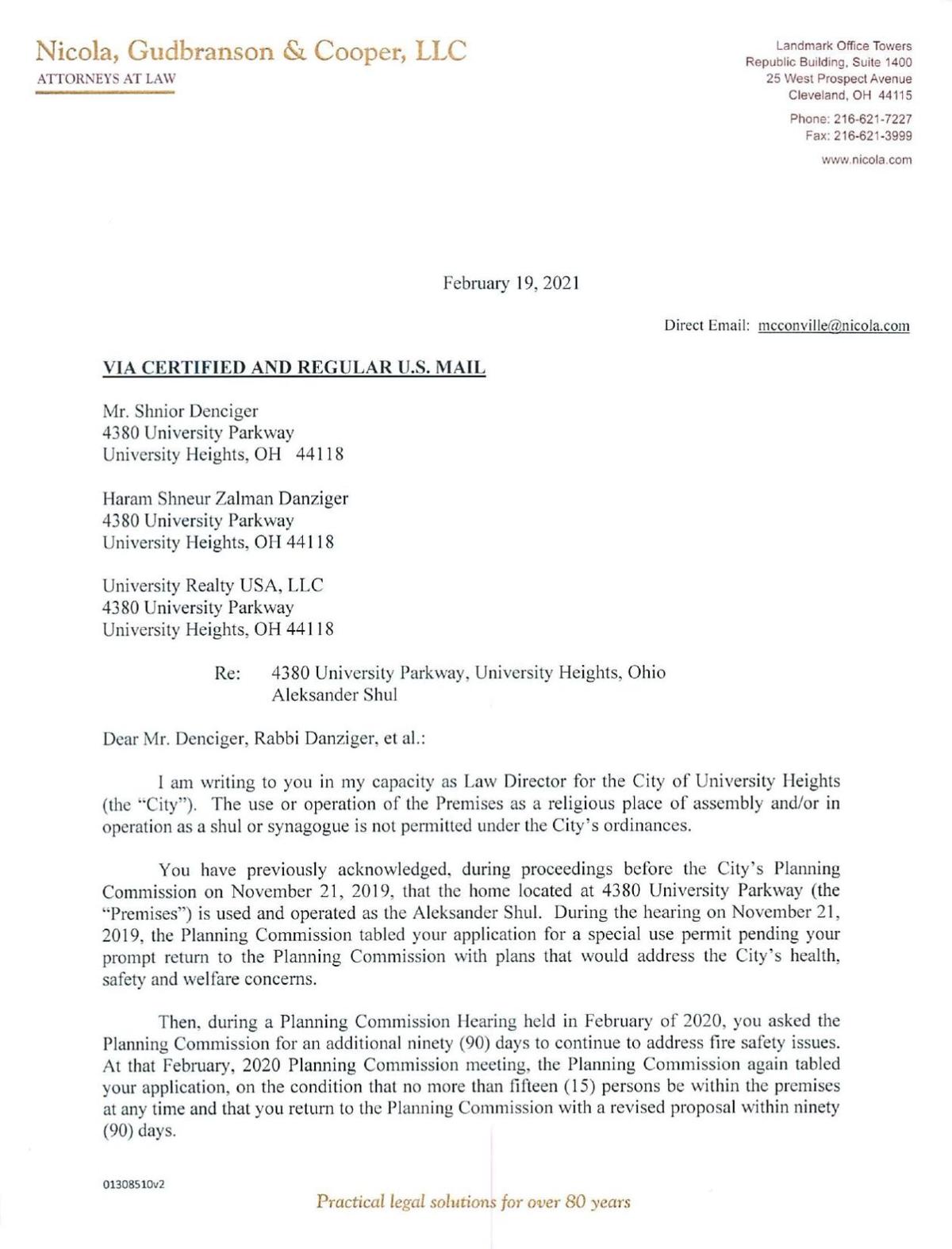 Reached on March 24, Harav Schneur Zalman Danziger, whose name was listed on the Aleksander shul’s Twitter account, said he could not comment as he was davening Shacharis and preparing for Pesach. He suggested the Cleveland Jewish News call him after the eight-day festival ends on April 4.

“I am very sorry, but let’s leave it until after Pesach because now is a very high pressure (time),” Danziger told the CJN. “We’ll take a talk after yantif and I’ll tell you.”

McConville filed a cease-and-desist order regarding a proposed Shabbos shul at 2343 Miramar Blvd., Jan. 21. The applicant withdrew plans to use the space as a house of assembly on March 23.

In addition, the city sought and received an injunction in Cuyahoga County Court of Common Pleas Feb. 17, barring the use of a home at 4464 Churchill Blvd. as a synagogue.

McConville laid out the city’s legal history with the Aleksander Shul in his Feb. 19 letter.

Specifically, the basement assembly room had only one means of egress and exit, a violation of state fire code, and the building did not contain a barrier between the residence and the assembly space, University Heights Mayor Michael Dylan Brennan told the CJN. 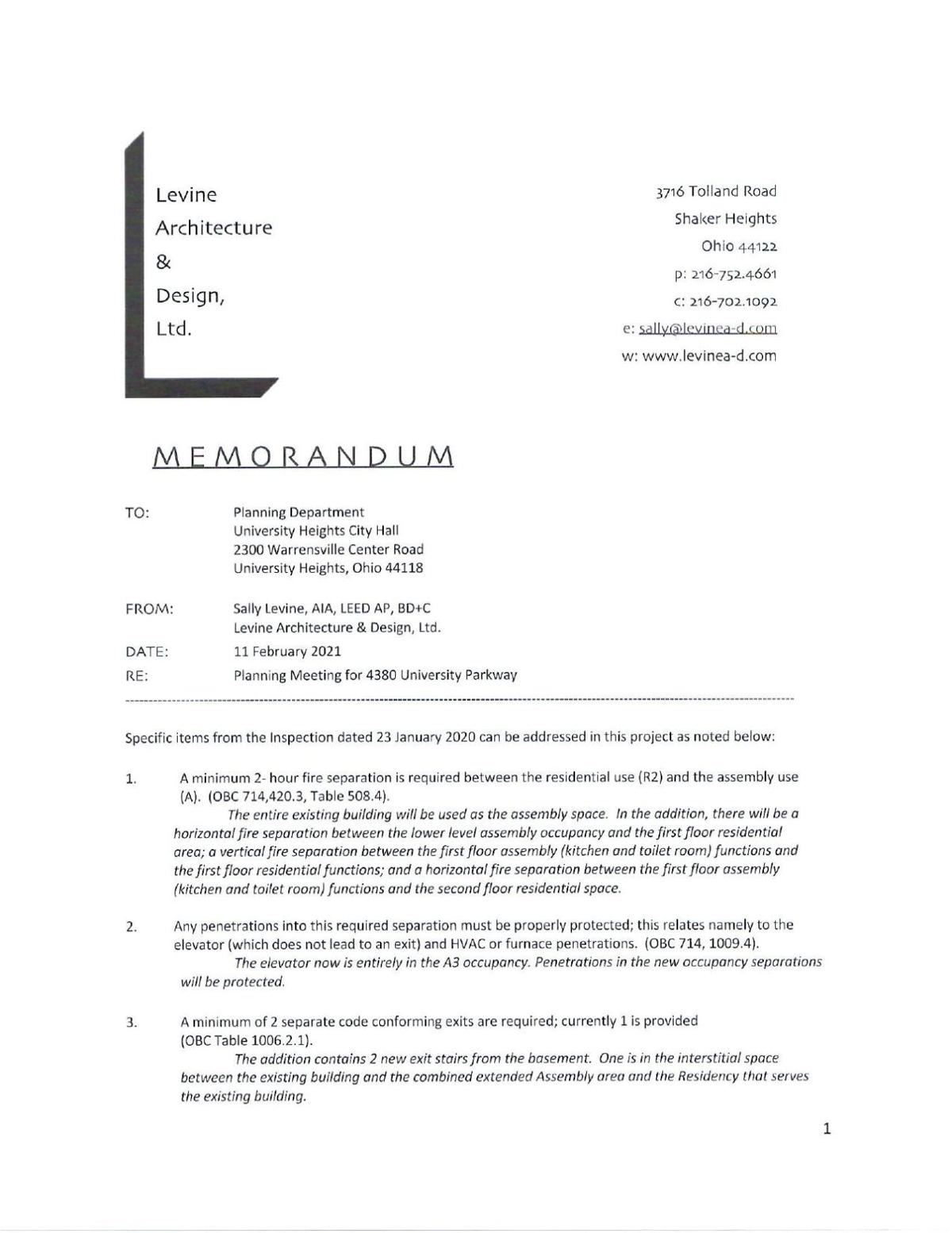 At a February 2020 meeting, the planning commission tabled the application again on the condition that no more than 15 people be in the premises and allowed the applicants another 90 days to file plans, according to McConville’s letter.

About a year later, on Feb. 11, 2021, Sally Levine of Levine Architecture & Design Services Ltd. of Shaker Heights submitted plans on behalf of 4380 University Parkway. They included a 2,425-square-foot basement addition with a 2,018-square-foot assembly room with capacity for 501 people, which was later revised to 130. 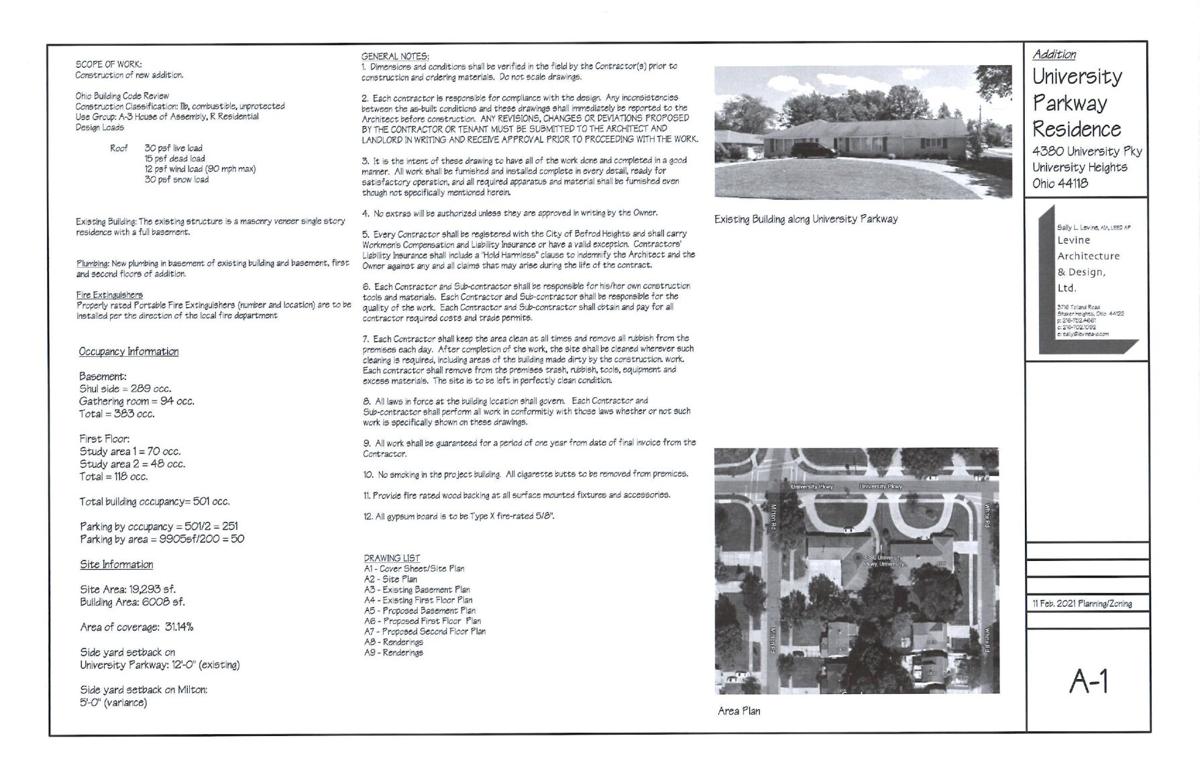 Brennan summarized the plan Levine submitted in February. “The new proposal called for converting the entire existing structure into a house of assembly and a banquet gathering hall where the residence was, taking out what was the second-floor bedrooms and having a vaulted ceiling, building a second stairwell on the south end, which then is shared by another structure, which basically would be a residence, and another assembly room underneath it,” Brennan told the CJN March 11.

The city then held a pre-administrative review.

“You’re wanting to build a structure that can hold up to 501 people, you don’t even have a parking lot,” Brennan said. “I urged them – because this was pre-administrative – to not file.” 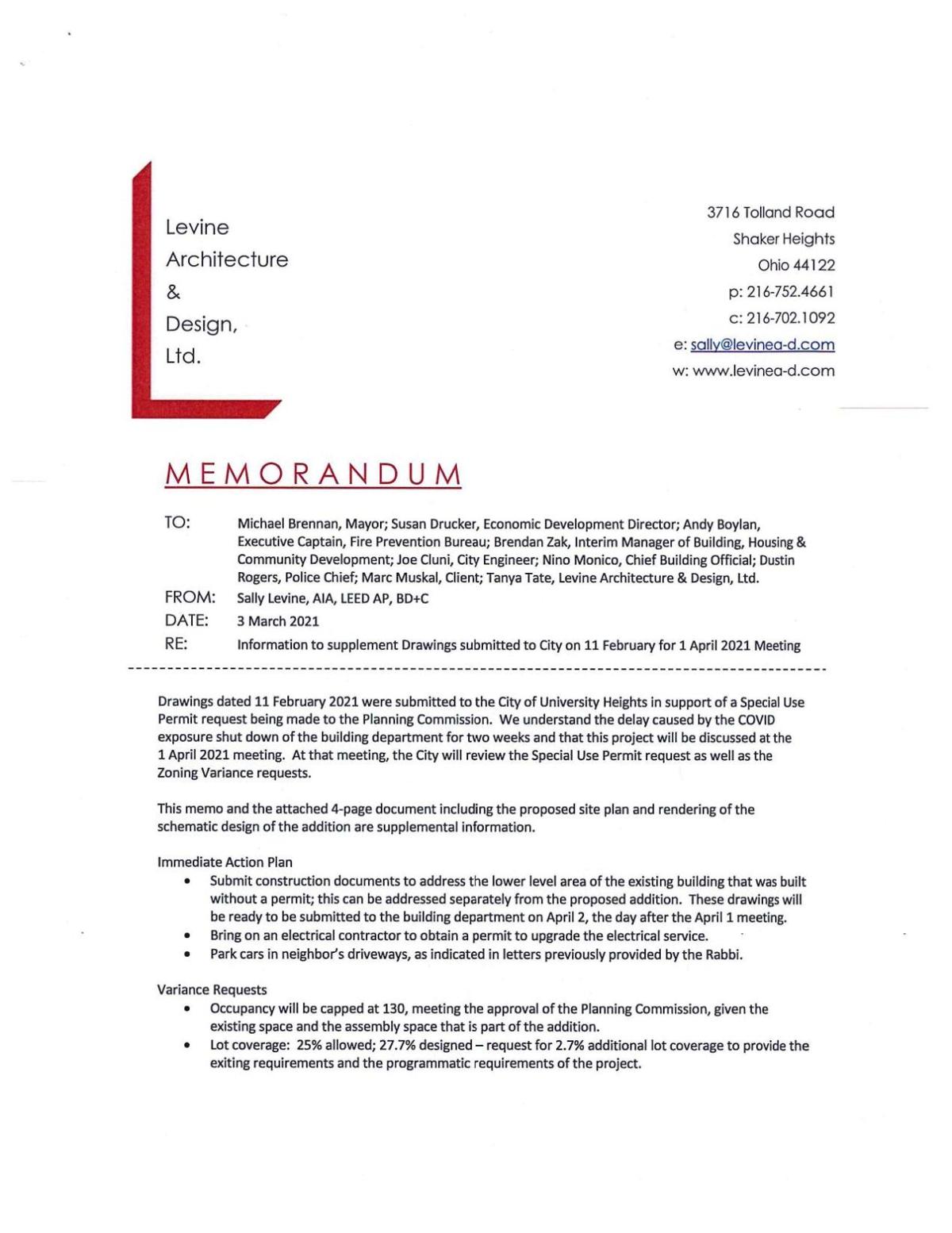 On Feb. 14, Brennan said he drove by the property on his way home from conducting city business in a nearby neighborhood.

“I was surprised to see 13 cars parked in the two driveways and another 33 cars parked on the street in all directions from the shul – this even though they are still under the prohibition of having no more than 15 people inside,” Brennan said. “And I brought that to the attention of our prosecutor and our law director.”

In the cease-and-desist order, McConville wrote that continued use in violation of city ordinance could result in building code citations in addition to those in a case pending in Shaker Municipal Court and “in additional remedies including an injunction.”

The housing court case was filed Sept. 6, 2019, against University Realty USA of Brooklyn, N.Y. The defendant pleaded not guilty. Trial is scheduled for May 12.

Kenneth J. Fisher of Kenneth J. Fisher Co., LPA, in Cleveland is representing University Realty USA in the land court case. When contacted March 24, Fisher told the CJN he had not seen the filing of the cease-and-desist order and had no comment.

In a March 3 memorandum and revised plan, Levine identified variances needed for setbacks and distance between structures, lot coverage, minimum acreage for a religious building and parking. Of parking, she wrote, “The practice of parking in approved neighbors’ driveways is being implemented.”

Levine spoke to the criteria for the University Heights special-use permit, writing the plan will “correct all the violations and will enhance the existing interior spaces.”

Levine also wrote the capacity at the property would be capped at 130 people in the March 3 memorandum and revised plan.

“Members of the Orthodox community pay their taxes, keep up their homes and support local businesses,” she wrote. “This project will serve part of this community and will represent the city’s commitment to these citizens.” 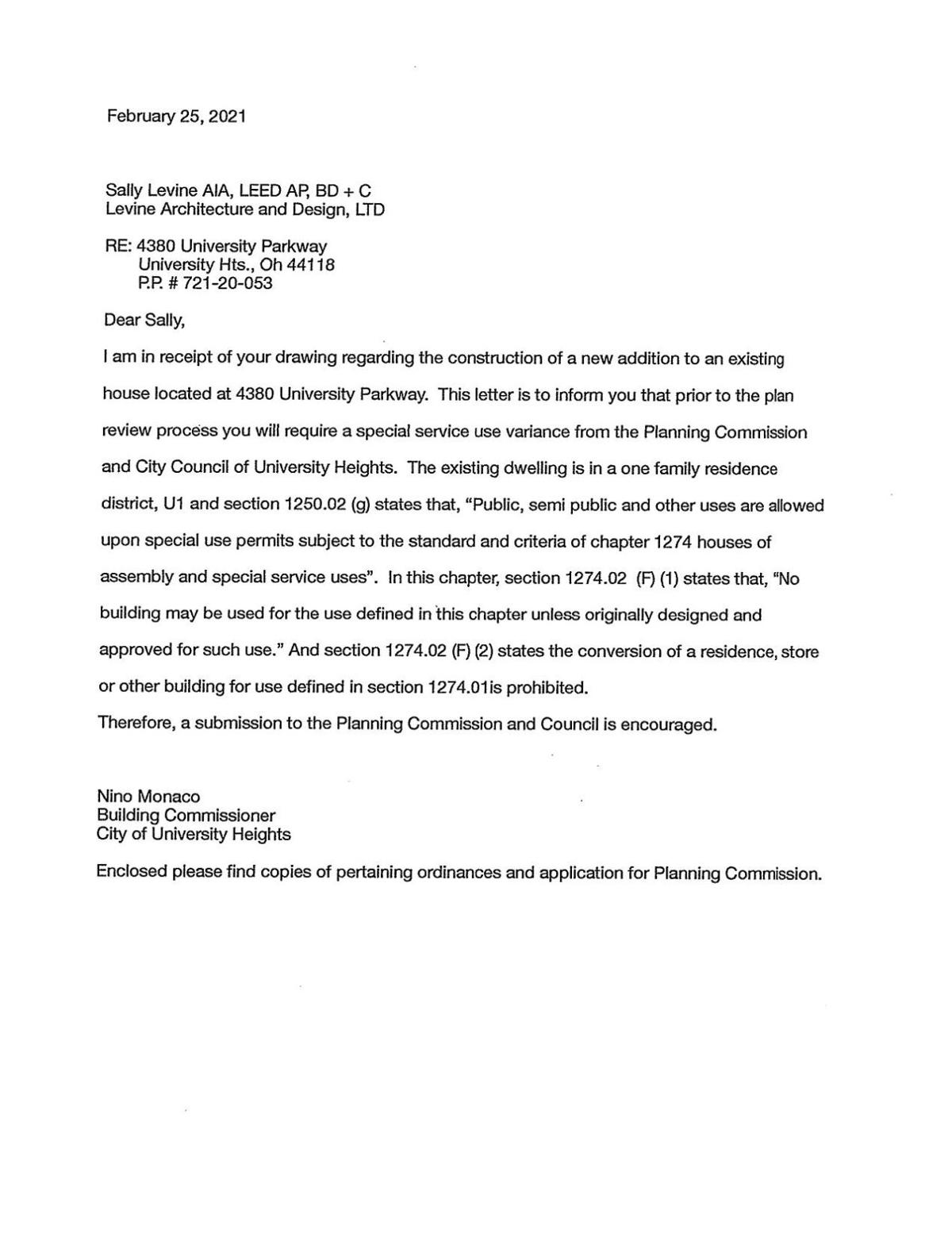 Rabbi Daniel J. Grand has withdrawn his request to operate a Shabbos shul from his home at 2343 Miramar Blvd. in University Heights, after a p…