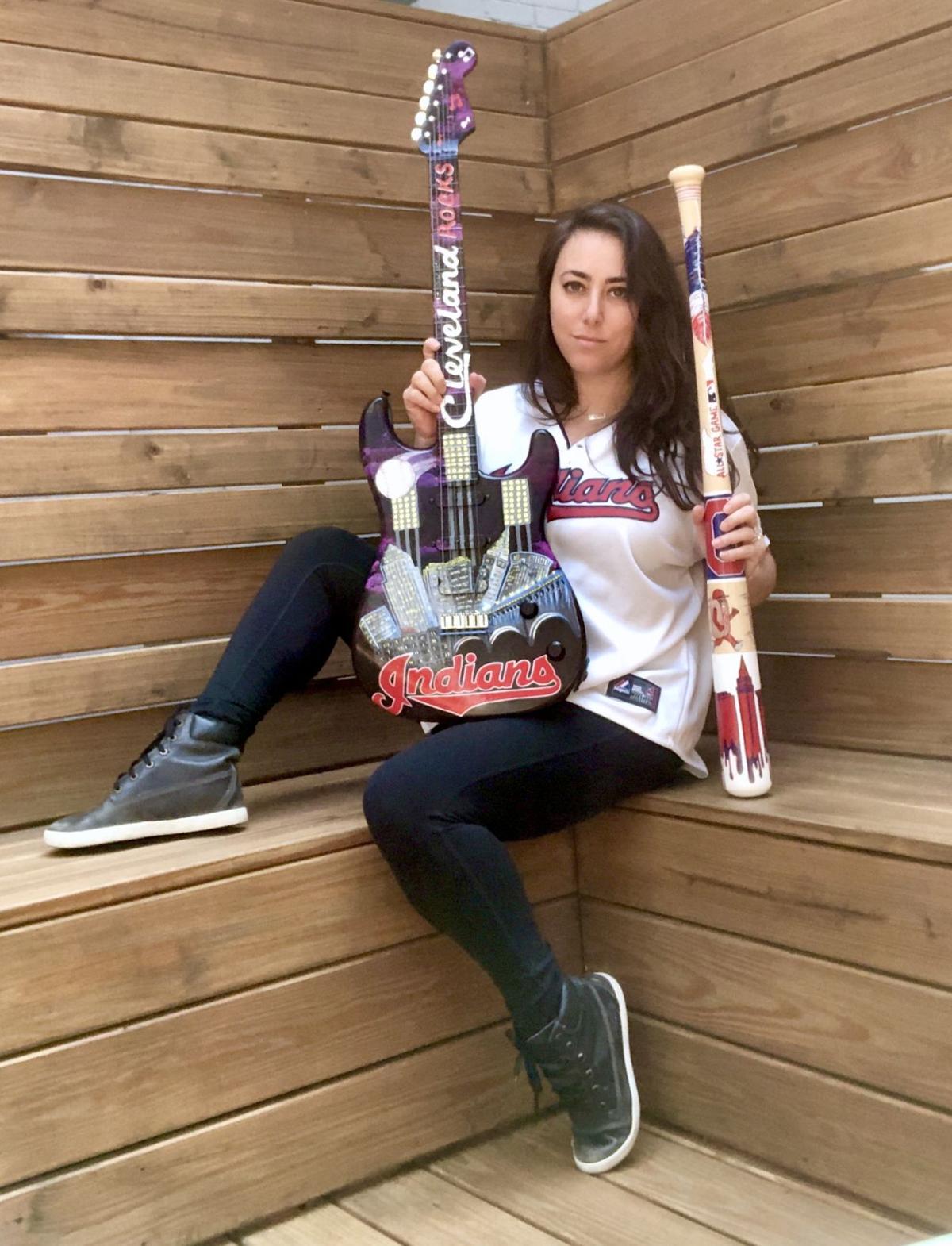 Cleveland artist Allison Liffman holds up the bat and guitar she painted as part of an art project for Major League Baseball, Louisville Slugger and Fender guitars. 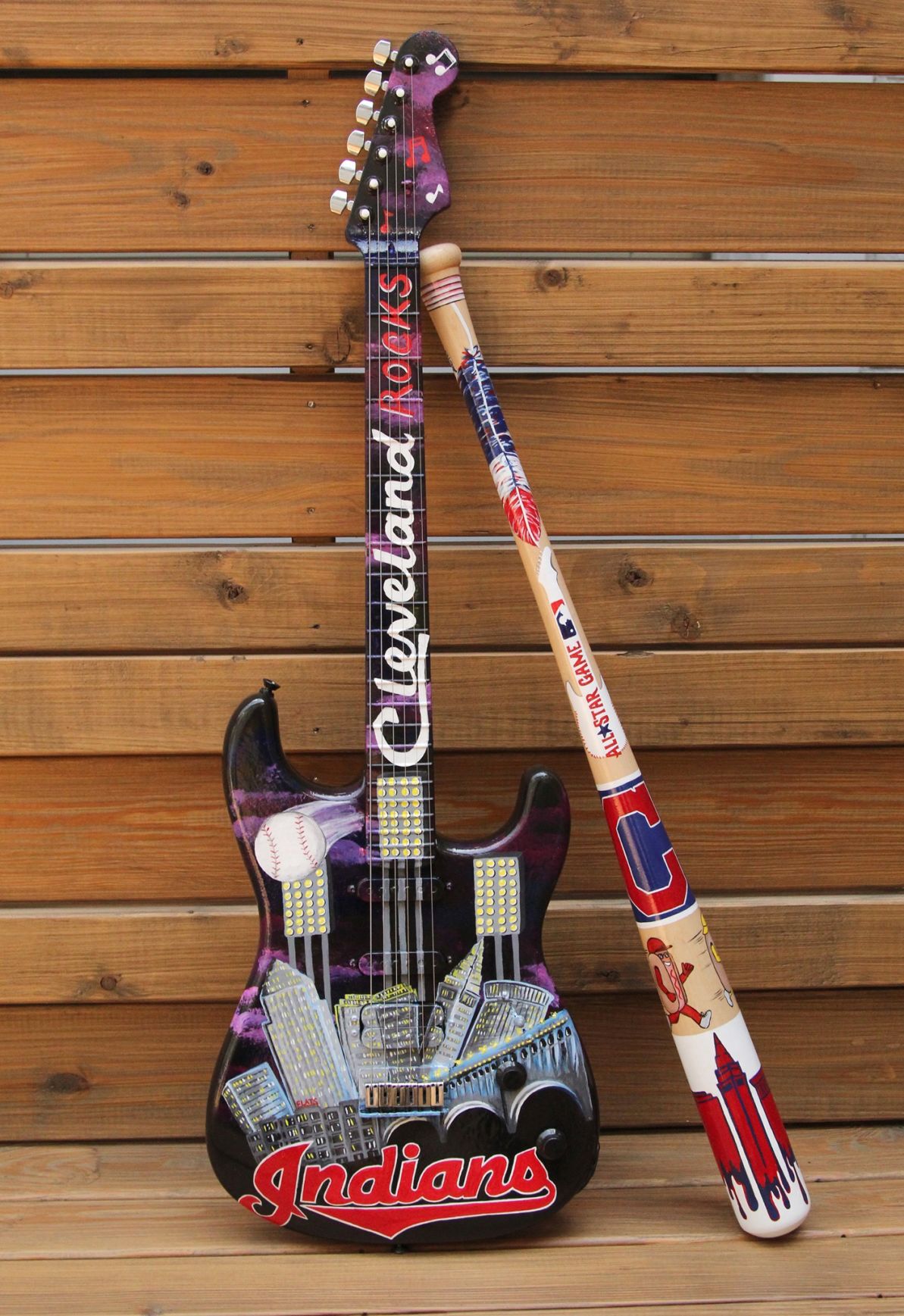 The bat and guitar painted by artist Allison Liffman for the MLB All-Star Game.

Northeast Ohio artist Allison Liffman got the chance to show off her city through art thanks to a project for the upcoming Major League Baseball All-Star Game, which will be played July 9 at Progressive Field in Cleveland.

Liffman was contacted by Major League Baseball for a project in conjunction with baseball bat maker Louisville Slugger and Fender Musical Instruments Corporation, which is famous for its guitars. The project called for an artist representing each of MLB’s 30 teams to paint an All-Star Game-themed and city-themed design on both a bat and guitar.

Liffman’s work, as well as the bats and guitars from the other artists, will be displayed in Public Square in Cleveland from about 11 a.m. until 7 p.m. July 6-9. After the All-Star Game, the works will be auctioned off for charity, with the proceeds from the guitars benefiting Fender’s PLAY Foundation and proceeds from the bats to benefit MLB’s Play Ball initiative.

“The guitar and the bat that I created are very specific to Cleveland,” said Liffman, adding that MLB contacted her because they had found her work online and a lot of her work depict scenes of Cleveland and music. “When they found me online at allisonliffmanart.com, they thought I would be perfect for the illustrative style.”

Liffman’s guitar features the Cleveland skyline, among other high-profile landmarks.

“After the skyline, my fiance actually gave me the idea for the ‘toothbrush lights’ (at Progressive Field), so I incorporated those,” she said. “I figured the neck of the guitar was the perfect place to have the (script) Cleveland sign. I filled in all of the details from there, like the flying baseball, the Indians logo, the music notes at the top of the neck. That kind of flowed from there.”

The bat also features the Cleveland skyline, near the barrel. It also depicts the Indians’ hot dog mascots Ketchup, Mustard and Onion chasing each other, an idea for which she again credited to her fiance. Both the end of the bat and the knob have a baseball on it, as well, and the All-Star Game logo is featured.

Liffman, whose family attends Anshe Chesed Fairmount Temple in Beachwood, said the pieces took about 15 hours each to complete. She noted painting each was time consuming; she frequently needed to add a coat of paint and then wait for that coat to dry before she could resume.

“It’s a process, definitely,” she said.

She used acrylic paints, which she said she uses in her daily life as a painter. She said she thought the bat would be the more difficult of the two pieces due to its shape but found the guitar was quite heavy and hard to move around. She is not a musician, so she had to learn how to unstring and restring a guitar before painting it. She also found painting over some of the standard parts of a guitar, such as the neck and fretboard, difficult.

“It was harder ... especially painting the back of the guitar when it dried,” she said. “With the baseball bat, I kind of leaned it against something, but with the guitar, I didn’t want to put it down. The guitar ended up being very difficult to maneuver around and paint.”

The Arts: Week of September 6