Burkons is due to be arraigned Oct. 14 at Shaker Heights Municipal Court on a single count of interfering with the civil rights of another person.

The incident involved Burkons contacting a Beachwood resident’s employer in July, after the resident made a complaint against an off-duty Beachwood police officer who questioned a teenager in September 2018 at the basketball courts at the Beachwood Family Aquatic Center.

Alix Noureddine filed a criminal complaint with the Beachwood Police Department in regard to Burkons. Beachwood then engaged University Heights prosecutor Stephanie Scalise to gather and review relevant evidence, wrote Nathalie Supler, Beachwood city prosecutor, in a motion to the court to withdraw as counsel and appoint a special prosecutor. Supler said she had a conflict of interest because city council appoints the city prosecutor.

Scalise “reviewed the matter for criminal charges to ensure the review process was fair and unbiased,” Supler wrote.

The charge was filed Sept. 25 by Scalise. 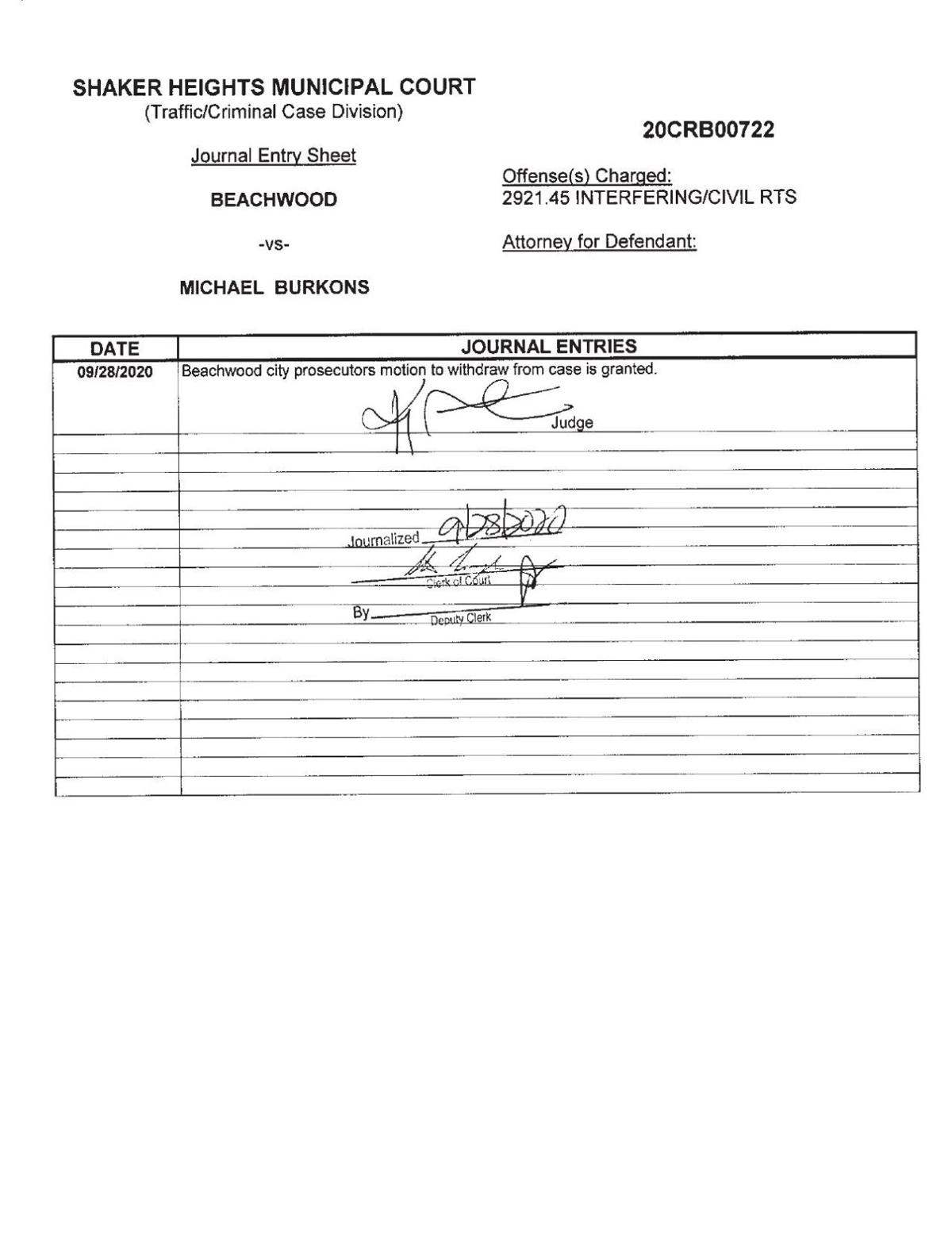 “My handling of the matter, including determining probable cause to issue charges and any subsequent decisions, is wholly independent and not at the specific direction of anyone in Beachwood,” Scalise wrote in an emailed statement to the CJN on Sept. 29.

Scalise said in her email that Burkons was charged with a misdemeanor of the first degree.

“The allegation contained in the complaint is that on or about July 13, 2020, while in his role as a council member of the city of Beachwood, Michael Burkons contacted the employer of (a Beachwood citizen) in retaliation for public complaints the citizen made regarding a Beachwood police officer,” Scalise wrote. “In so doing, Michael Burkons knowingly intended to keep (the citizen) from exercising his right to free speech, guaranteed by the First Amendment of the U.S. Constitution.”

Scalise said in Ohio, first-degree misdemeanors are punishable by up to 180 days in jail, a fine of up to $1,000 or both.

Burkons emailed a comment regarding the case to the CJN on Sept. 29.

“It’s funny that it took the (Beachwood) Law Department a year to appoint a special prosecutor to look into a botched investigation over a police shooting, but they figured out how to do it very quickly against me for my having simply expressed my opinion that a public official from another city was wrongly criticizing one of our police officers,” Burkons wrote. “I look forward to clearing my name in court and exposing the retaliatory motive behind these proceedings.”

Council president James Pasch wrote the CJN in a Sept. 29 email that he was informed by Supler of Noureddine’s complaint.

“City council has not been and is not involved in the criminal proceedings against Mr. Burkons, and a special prosecutor outside the city of Beachwood has sole discretion over this case,” Pasch wrote. “Like any other defendant in America, Mr. Burkons is entitled to due process.”

Pattakos discussed the charge in a two-page letter mailed to Beachwood Law Director Diane Calta, Scalise and Pasch on Sept. 25.

“It is incredibly ironic, to say the least, that Beachwood officials who are now accusing Burkons of depriving a citizen of free-speech rights are doing just that to Burkons, but to an exponential degree, by – quite unlike Burkons – having actually used the influence and authority of their public offices to institute criminal proceedings against him,” Pattakos wrote. “Even more incredibly, this irony is compounded by the fact that these Beachwood officials have taken this apparently retaliatory action in purported defense of a Cleveland Heights official, Noureddine – who complains that Burkons is somehow a criminal for doing the very same thing that Noureddine himself did to set off this whole mess: Register a complaint to a municipal government in which he is not an official about the conduct of one of that government’s officials. 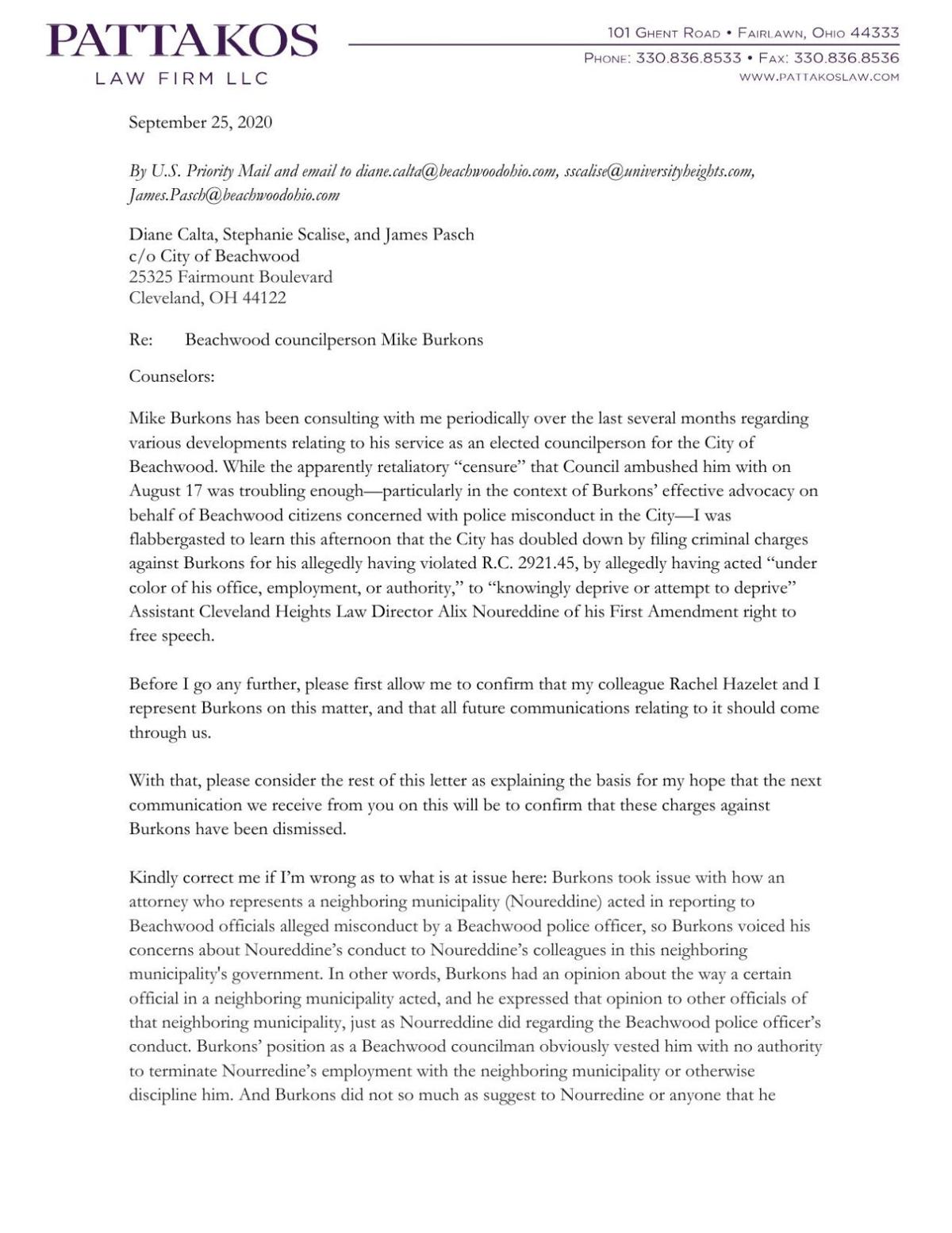 “It is perhaps needless to say at this point that if these absurd and transparently retaliatory proceedings continue, those participating – behind the scenes or otherwise – will invite civil liability (including punitive damages and attorneys’ fees) on a retaliation claim under 42 U.S.C. § 1983 (in which it would be shown what a real case of First-Amendment-violative conduct looks like), as well as under Ohio common law on a claim of malicious prosecution, at very least.”

Burkons said from his initial objections about the way Beachwood City Council did business, “It was clear that my promise to the voters of delivering increased accountability of their government’s operations would not be greeted warmly by certain of my colleagues in the Beachwood government.

“Since then, I’ve been the leading voice demanding accountability over the city’s mishandled investigation of a police shooting at the Beachwood Place mall in 2019, and a number of other issues that have caused the law director Diane Calta, prosecutor Nathalie Supler, and Council President Pasch, among others, to come under increased public scrutiny, including various press reports alerting the public to their missteps that have led to calls by citizens that Pasch resign.”

Pasch reiterated his position that the arrest was not politically motivated in a Sept. 30 email to the Cleveland Jewish News.

“No one in Beachwood government had any say in the bringing of charges,” he wrote.

Pattakos also emailed a brief statement to the CJN on Sept. 29.

“An important point the Law Department seems to be missing here is that Burkons has First Amendment rights too,” he wrote. “In my research, I couldn’t find a single case in U.S. history where a public official was held liable for violating someone’s First Amendment rights for merely having expressed an opinion about another public official’s conduct and am reasonably sure that no such case exists. The Beachwood officials who are driving these retaliatory proceedings should be ashamed of themselves.”

According to the public complaint, the incident leading to the charge occurred on Sept. 28, 2018, and involved Beachwood resident Vincent Swaby’s teenage son, two teenage girls and Beachwood police Lt. Kevin Owens, who was off duty. At least one of the teenage girls is Owens’ daughter.

According to the complaint, Swaby’s son approached Owens’ daughter at school two days in a row, and on the second day, she asked him to stop following her and threatened to tell the school resource officer.

“The same girl that told him to leave her alone the day before, came up to him at the basketball court and asked him what he wants,” the complaint said.

The girls left and returned with Owens who never introduced himself or asked to speak with the teenage boy’s father, but according to the complaint, told the teenager he was scaring his daughter and asked whether or not the boy was a resident of Beachwood and if he was allowed to be at the courts.

According to the complaint, Noureddine, who was nearby, approached to ask why Owens was questioning the boy and Owens told him the boy was harassing his daughter. Noureddine suggested Owens speak with the police. Owens said his daughter already spoke with the school resource officer and identified himself as a lieutenant with the Beachwood Police Department.

In the complaint, Noureddine said he asked Owens if he was acting under color of law and Owens said, “Why? Do I have to be? I can if I have to be.”

Then the parties dispersed.

Noureddine, who identified himself as a prosecutor for the city of Cleveland Heights in the complaint, said he felt Owens was using “intimidation” and it did not feel it was “right,” according to the public complaint.

When contacted by the CJN on Sept. 29, Noureddine had no comment on the matter. He is on leave until the end of October, according to Tiffany Hill, assistant law director for the city of Cleveland Heights.

Pasch said in an Aug. 19 email to the CJN Beachwood council as a whole was “disappointed” and “embarrassed” by Burkons’ email.