This story has been updated to include comments from L. Stewart Hastings.

The city of Beachwood announced the hiring of L. Stewart Hastings, Jr. as its new law director, according to a May 4 news release. City council is expected to vote on the hiring at a special city council meeting May 10.

He replaces Diane A. Calta, who took a position at Mansour Gavin LPA in Cleveland and Independence. Council has retained Calta as interim law director to assist with the transition and to complete pending matters.

In that capacity, he engaged in a wide range of legal issues for the city of Cleveland, including defending home-rule authority, serving as a member of the negotiating team for first-responder collective-bargaining agreements, and counseling the administration regarding day-to-day employment and human-resource issues, according to the release. He was also selected to be the lead counsel for all litigation related to the 2016 Republican National Convention in Cleveland, and worked closely with agents and lawyers in the Secret Service and FBI.

“Mr. Hastings’ experience is an exemplary combination of municipal law, litigation, and the understanding of politics and political structures,” Mayor Martin S. Horwitz said in the release. “He checks all the boxes for guiding Beachwood in legal matters.”

Hastings, 66, said he is looking forward to being law director in Beachwood and learned about the position through someone who knew of the opening.

In a reference to Beachwood’s recent legal entanglements, Hastings said his goal is “to lower the temperature” of news coverage of the city.

Hastings was demoted and suspended for 30 days in 2012 from his position in Cleveland.

“Certainly, the selection committee in Beachwood knew about it and they asked me about it,” Hastings said. “I told them my perspective.”

The suspension stemmed from his answering a firefighter’s hypothetical question, he said, in which Hastings gave an initial answer and promised to do additional research, “which was never done.”

Usually requests for legal opinions, he said, came from the chain of command.

Prior to working at the city of Cleveland, Hastings was in private practice for 12 years, serving corporate and insurance-company clients. He was also elected to the Parma Board of Education from 1990 to 1997, serving three years as president and three years as vice president.

“Mr. Hastings brings a wealth of legal experience with him to the city of Beachwood from both the private sector and city of Cleveland,” council president James Pasch said in the release. “We know that our city and law department will be in good hands with Mr. Hastings’ counsel. I’d also like to thank Councilman (Eric) Synenberg for leading the search process; his hard work led to a successful result.”

Synenberg, head of council’s legal and personnel committee, said in the release, “I extend my thanks to city council, Mayor Horwitz, Assistant Law Director Nathalie Supler and Human Resources Administrator Dana Canzone for their work ensuring this hiring process was both open and fair. This was a competitive field of 21 applicants, and we worked well as a team to interview everyone in an equitable manner.”

Hastings’ community involvement includes 12 years with The Cleveland Orchestra Chorus, Safety Town bicycle-safety instructor in Bainbridge Township since 2006, and being a ride captain of the Shul Boys Motorcycle Club.

Hastings was one of eight finalists, according to a public records request made by the Cleveland Jewish News. 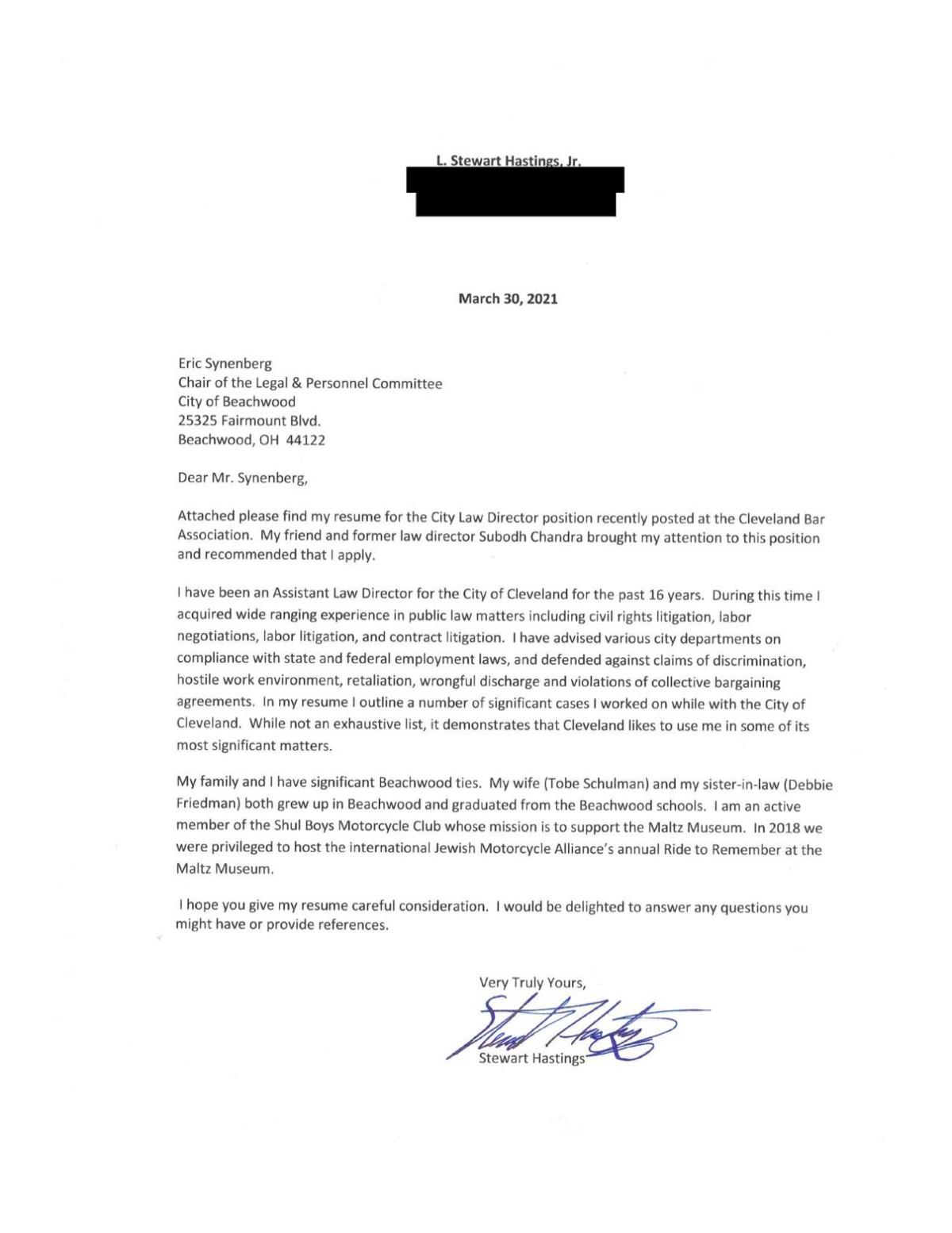 In his March 30 cover letter, Hastings referred to ties to Beachwood and the fact that his wife, Tobe Schulman, and sister-in-law, Debbie Friedman, both grew up in Beachwood and graduated from Beachwood High School in Beachwood. “I am an active member of the Shul Boys Motorcycle Club whose mission is to support the Maltz Museum,” he wrote. “In 2018 we were privileged to host the International Jewish Motorcycle Alliance’s Ride to Remember at the Maltz Museum.”

Lynn Johnson, communications coordinator for the city of Beachwood, told the CJN in a May 4 email she did not have information about Hastings’ salary available.

Beachwood City Law Director Diane A. Calta will resign in mid-April at the earliest to take a position with Mansour Gavin LPA of Cleveland and…