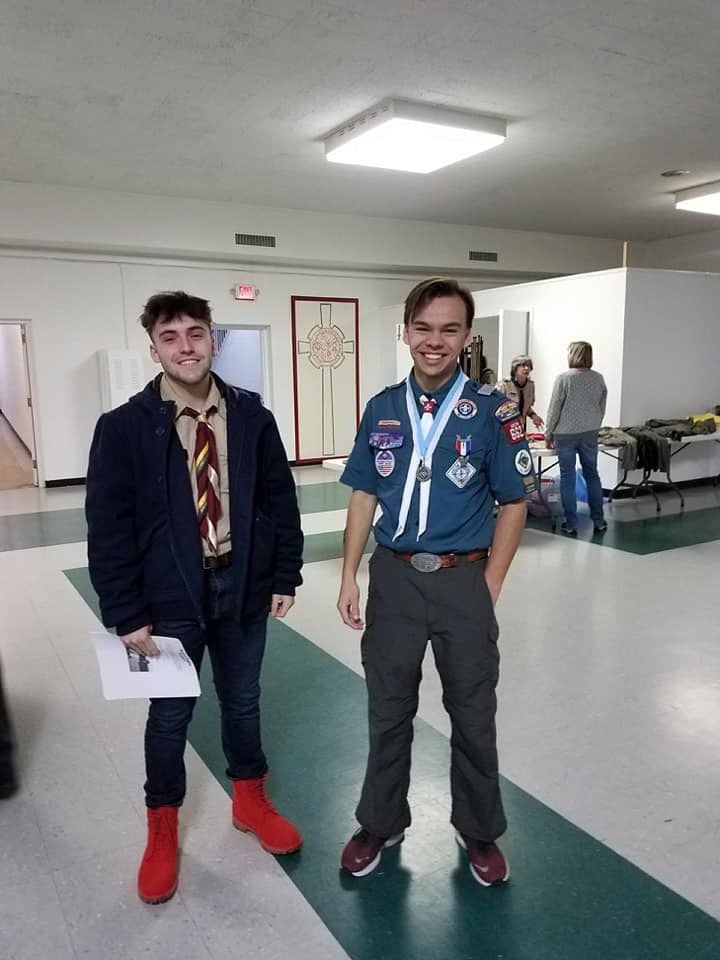 Seth Rosky, left, and his friend, Andrew Steckner, smile for a photo following a Boy Scout meeting where Rosky handed out flyers for his Eagle project Dec. 15, 2019. 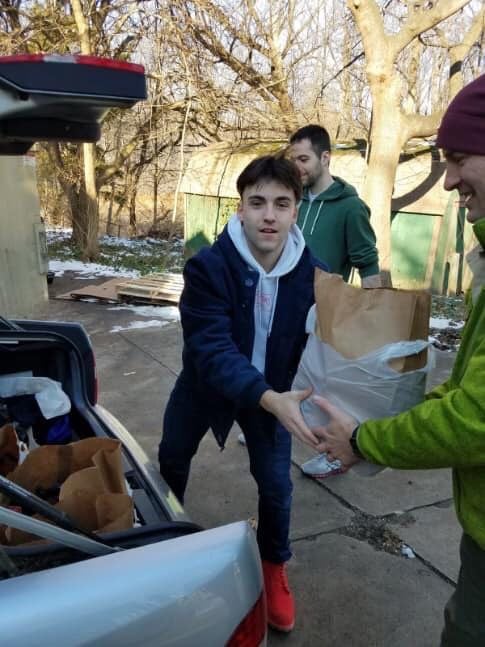 Seth Rosky couldn’t have predicted that when he joined the Boy Scouts of America in sixth grade that six years later he would be honored with the highest achievement, which only about 6% of eligible Scouts receive each year.

Once COVID-19 subsides and he is approved, Rosky will be an Eagle Scout.

“Becoming an Eagle Scout means everything,” said Rosky, an 18-year-old senior at Beachwood High School who attends Jewish Family Experience in University Heights. “Just the fact that it’s such a pristine honor and one not that many people actually achieve feels really good. I worked so hard to get it.”

To qualify to become an Eagle Scout, Rosky said he had to complete requirements to move up in the other six Boy Scout ranks: Scout, Tenderfoot, Secondclass, Firstclass, Star and Life. He also had to earn 21 merit badges, complete an Eagle Scout service project of his choosing and demonstrate leadership within his troop.

For his project, Rosky selected the Cleveland Kosher Food Pantry in South Euclid, where he and his friends spent more than 100 hours packing and delivering food bags to older adults living in senior housing on Drury Court in Mayfield Heights.

“There are so many things you have to do,” Rosky said. “The Scoutmaster, the leader of the troop, he just helps by guiding you. You have all these requirements you have to keep on ranking up. It wasn’t easy. For the merit badges, it takes years and years because there’s some requirements that you just can’t do at the meetings. There’s some like, you have to hike a certain distance, build campfires, build tents, help kids out. There’s a lot of leadership too – you have to be a good leader.”

Rosky’s journey with the Boy Scouts started when he was 12. He joined for a chance to make friends after moving to Beachwood from Israel, where he had lived for three years.

“I was trying to make friends, and I met this one friend who was actually in Boy Scouts,” Rosky said. “I was like, ‘Oh cool, I’ll see how it is.’ He took me to meetings and I enjoyed it because there was so much to do, so I just eventually joined.”

With the Boy Scouts’ rule that all Life Scouts wanting to become an Eagle Scout complete the requirements before their 18th birthday, Rosky was racing against the clock. He had difficulties balancing Scouts with school and extracurricular activities.

“Last year, I took a break from Boy Scouts for a little bit because I was really into soccer and had time,” he said. “After, I was like, ‘Oh shoot, I’m running out of time.’ So I finished soccer, and started to go back into Boy Scouts and finished it. Doing my schoolwork and Boy Scouts was pretty tough because a lot of campouts were on the weekends, when I should have been doing homework.”

But the time spent working to achieve the top Boy Scout ranking is one he will never forget, especially a week-long canoe trip in Canada, he said.

“We got to the campground, got all of our stuff out and started making food on these little stoves that we bring,” Rosky said. “As we were making the food, all these rattlesnakes came up right next to us and we ran away. It was crazy. We also saw bears later. That trip was really fun.”

All that stands between Rosky and his Eagle Scout badge now are the pandemic and being approved by a review board consisting of four or five members of the troop committee. His original meeting was called off due to the virus, but it will be attended by his scoutmaster and adviser, and the board will ask him questions to see if he’s fit for the title.

“They basically verify that you’re capable of being an Eagle and that you should be an Eagle – because it’s a hard process and that’s the final string,” he said. “After that, they congratulate you and you’re an Eagle. They give you the badge and everything.

“At that meeting, there’s such a low percentage that fails because there’s so much that goes into it getting to that point. They’re just making sure, because after you’ve gone through six years of all this, you shouldn’t be failing that.”

While he looks forward to the day he moves up from Life Scout, he recalled completing his Eagle project and what a Scout who volunteered with him said.

“He comes up to me and he’s like, ‘Thank you. I love that project,’” Rosky said. “It just made me feel so special because I saw that kid in me when I was a Scout. I felt like I was changing that kid’s life, and I felt like he would get to Eagle and think of me.”