The teachers’ union for the Cleveland Heights-University Heights City School District filed a 10-day notice to strike beginning Dec. 2, according to a news release from the union.

“We’re fighting for a fair contract because we know that the alternative – lowering standards for teachers and staff – will increase turnover and drive experienced, skilled educators out of our school district,” Cleveland Heights Teachers Union President Karen Rego stated in the release.

Over the past decade, union members have received raises totaling only 8.5%; far below the cost of living increases, and far less than raises in neighboring districts, according to the union’s release, which appears on its Facebook page. The employee share of the health care insurance premium will rise to 250% of its current share. In addition, the contract eliminates a 1% retirement contribution. On average, the union says members will lose close to $4,000 on the health care changes alone. When the retirement concession is added in, some members may lose up to 8% or more of their take-home pay.

“We understand the financial state of our school district, especially the impact of voucher deductions in our district,” Ari Klein, first vice-president, stated in the release. “We’re committed to working together with our board to change state policy and end the harmful EdChoice voucher deductions. We’re disappointed that instead, our board has chosen to attack the teachers and staff who keep this school district running.” 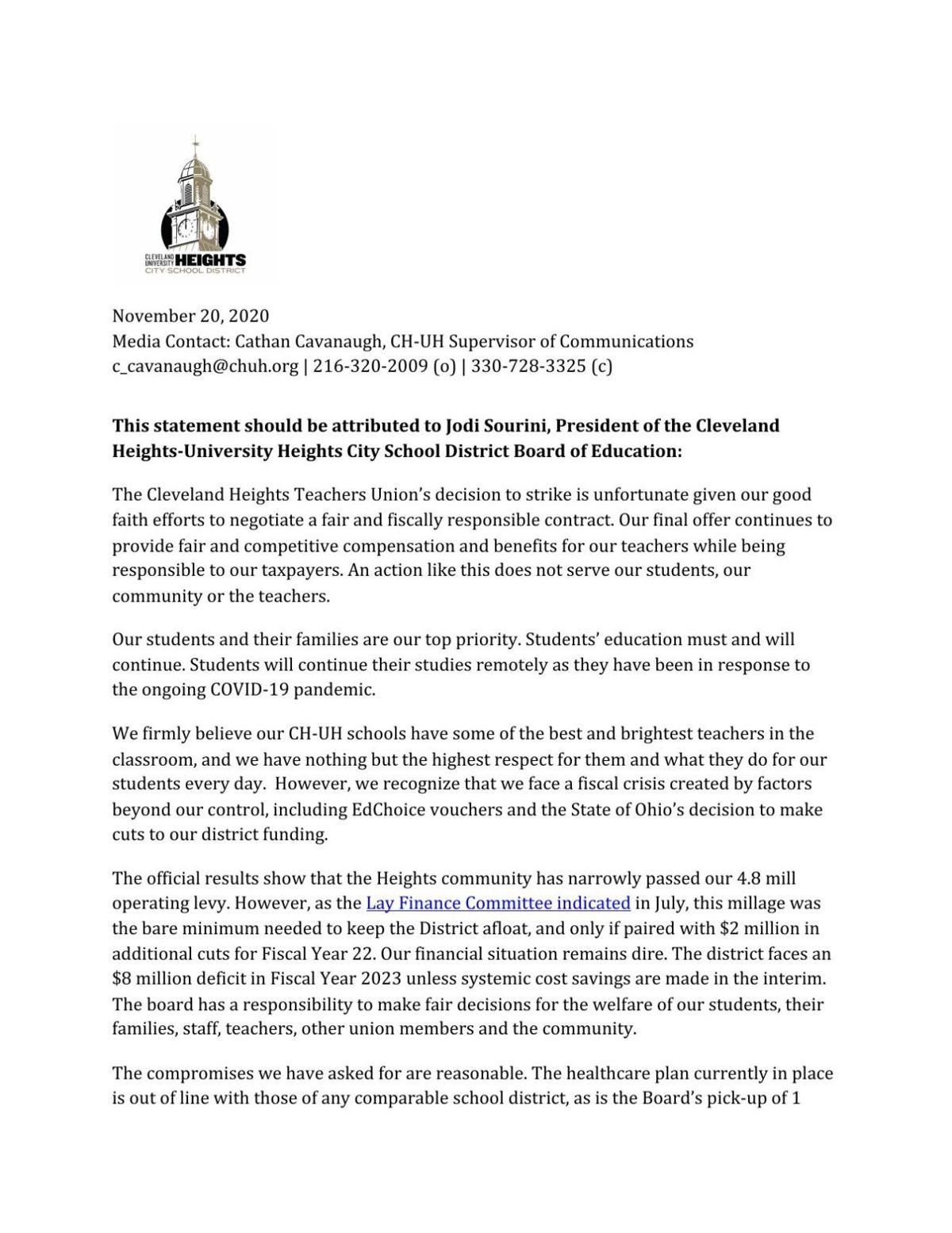 In a Nov. 20 statement, Jodi Sourini, president of the school board, said the district made a good faith effort in negotiations.

“Our final offer continues to provide fair and competitive compensation and benefits for our teachers while being responsible to our taxpayers,” Sourini stated. “An action like this does not serve our students, our community or the teachers.”

Sourini said the district faces “a fiscal crisis created by factors beyond our control, including EdChoice vouchers and the state of Ohio’s decision to make cuts to our district funding.”

The passage of a 4.8-mill operating levy in November will provide “the bare minimum and only if paired with $2 million in additional cuts in fiscal year 2022,” and according to Sourini’s statement, the district’s financial situation “remains dire,” citing a projected $8 million deficit in fiscal year 2023 “unless systemic cost savings are made in the interim.”

The November ballot issue passed by a margin that required an automatic recount, and the recount was ongoing as of Nov. 24. The results are expected after Thanksgiving.