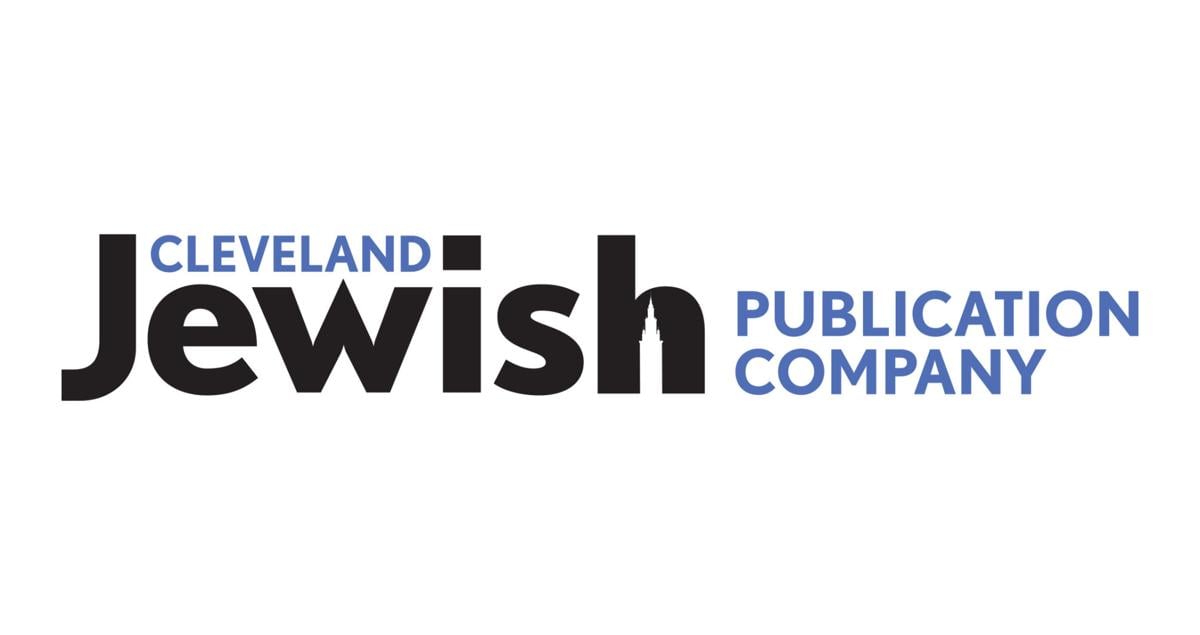 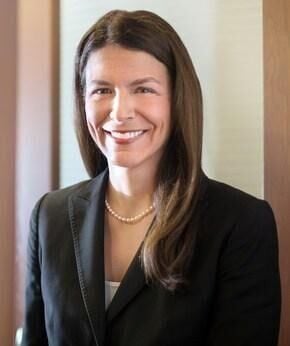 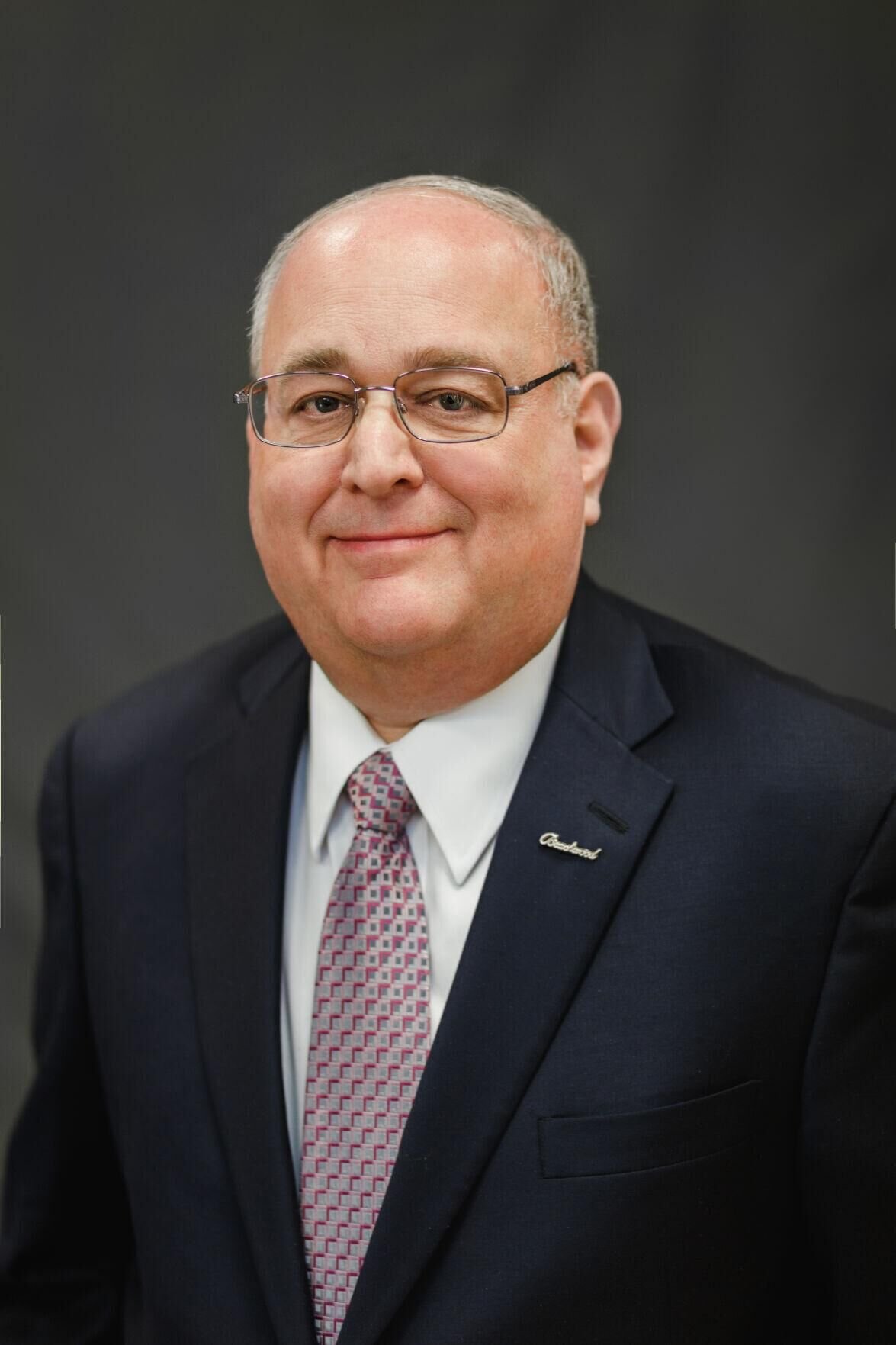 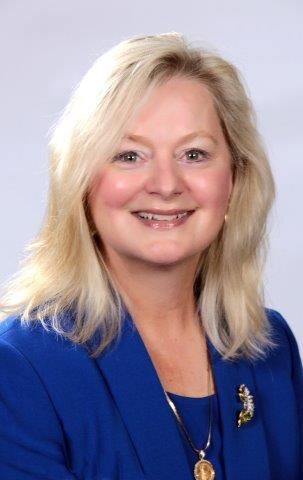 The Cleveland Jewish Publication Company received all the public records it was seeking, as well as all its attorneys’ fees, after a yearlong battle with the city of Beachwood, which culminated in a lawsuit it filed in the Ohio Supreme Court.

The lawsuit, filed July 22, 2020, against the city and its former law director, Diane Calta, for violations of the state’s Sunshine Law, was dismissed at CJPC’s request after it received all of Beachwood’s public records pertaining to the city’s settlement of a claim by employee Whitney Crook of harassing behavior by Mayor Martin S. Horwitz. Among the records CJPC sought were Crook’s letter to Beachwood alleging improper conduct of the mayor as well as the settlement agreement, which documented the city’s agreement to pay Crook $16,000 due to the mayor’s conduct. Both documents were initially withheld by law director Calta, then released in redacted form. 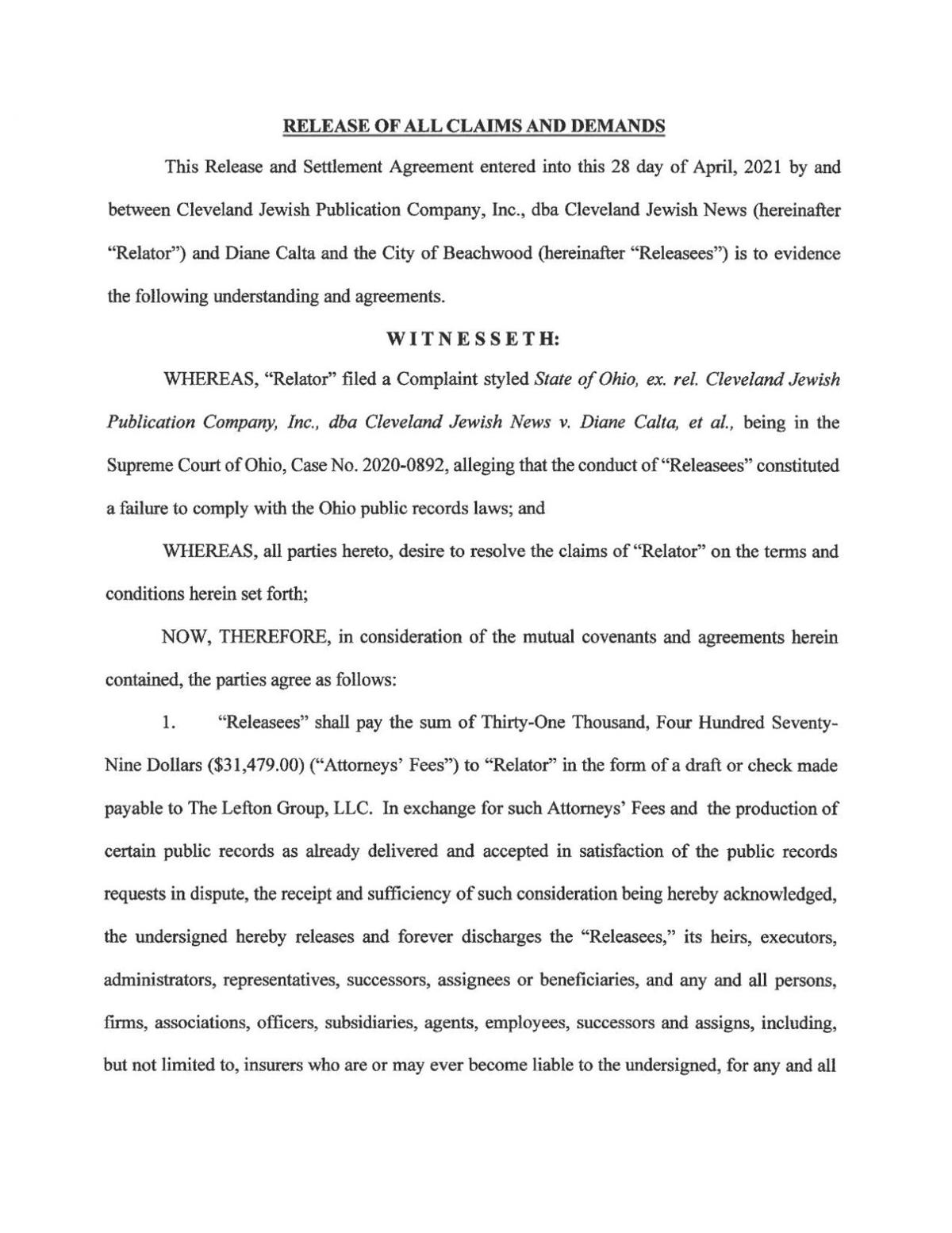 Under terms of the settlement, Beachwood also paid $31,479 for CJPC’s attorneys’ fees. Upon reaching the settlement through mediation, the case was dismissed May 12.

The lawsuit documented that the city and Calta had repeatedly, over five months refused access to public records the Cleveland Jewish News is legally entitled to based on Ohio Sunshine Laws.

In addition to the demand letter sent by Crook’s attorney and settlement agreement documenting resolution of Crook’s claim, the CJN sought records of communications among Beachwood officials, including city council and Horwitz, regarding CJN’s efforts to report the story. The CJN also requested records of the city’s legal bills to defend against the claim and other records pertaining to Crook’s allegation about the mayor.

Calta repeatedly denied CJN’s requests, calling them “overly broad,” but then identifying precisely the records CJN was asking for. Ultimately, the city voluntarily agreed to release all the records CJN requested.

“The people of Beachwood deserve to know what is going on in their community,” said attorney Karen C. Lefton, owner and principal at The Lefton Group, LLC, in Fairlawn, who represented the CJPC. She said the company got all it asked for through the settlement.

“The big takeaway is we hope public entities are always going to comply with the Public Records Act,” she said. “But we want them to understand that if for any reason they don’t – such as they want to protect the privacy of a person in their office, or they don’t want to embarrass the mayor or another public official – the CJN will look at it and will assess whether the records are public under the law. And if they are, CJN will take whatever action is necessary to protect the citizens’ right to be informed. That includes filing a lawsuit.”

Horwitz, in a statement emailed to the CJN May 13, said the lawsuit “has no bearing or impact on Beachwood’s processing of public records requests.”

“The city has always and will continue to process requests through our law department and in compliance with the rules and regulations set forth in the Ohio Sunshine Laws,” Horwitz said. “The law director or assistant law director will continue to make the final determination of what information can be appropriately released. Due to increased requests and to improve efficiency, last year the law department implemented an online web portal to process public records requests.”

Beachwood’s lawyer in the case, John T. McLandrich, partner at Mazanec, Raskin & Ryder Co., LPA in Solon, declined to comment when contacted by the CJN.

Calta deferred any comments to McLandrich.

“The CJPC was reluctant to enter into this lawsuit but we felt it our responsibility to hold the city of Beachwood accountable to its taxpayers,” said David R. Hertz II, chairman of the CJPC board of directors. “Government officials must follow the law. The state’s Sunshine Laws exist to support residents’ right to know how government officials conduct the public’s business.”

In February 2020, the CJN began submitting public records requests to Calta centering around a demand by Crook, clerk of counsel and a legal assistant, for $25,000 to settle claims related to Horwitz’s behavior toward Crook since he took office in January 2018. Three incidents were specifically described by Crook’s attorney, Brian Green of Shapero & Green LLC in Beachwood. In his Feb. 7, 2020, letter to the city, Green stated that Horwitz was “looking down (Crook’s) shirt and made an inappropriate comment about her tattoo that was partially showing.” Green also wrote that “Horwitz made a sexually provocative comment that he should punish (an implied spanking).”

On May 26, 2020, Crook signed a settlement agreement awarding her $16,000. Initially, Calta denied the existence of the settlement agreement, then declined to release it, and eventually released a redacted version, which led to CJN filing its lawsuit.

Rather than involve city council in a response to the demand letter, lawyers for the city’s insurance group, the Northern Ohio chapter of the Risk Management Association, negotiated a settlement with Crook’s attorney and informed Horwitz of the settlement afterward. The city’s finance director, Larry Heiser, previously told the CJN he was purposely left in the dark on the claim and the settlement.

The public records sought in the CJPC’s lawsuit included the unredacted demand letter and settlement agreement with Crook, as well as city communications regarding the CJN’s reporting on the matter.

“Beachwood, as a public entity, and the law director and the people in charge of enforcing the laws have a duty to comply with the Public Records Act even if they don’t want to, even if it is embarrassing to them or another person who is publicly employed,” Lefton said. “It’s really their duty as public officials to have full disclosure.”

Calta initially asked the CJN to sign an indemnification agreement, assuming liability for the city’s actions should someone object to the city’s compliance with its duties under the Public Records Act. The CJN declined to sign such an agreement. In addition, Calta suggested the CJN seek the public records from private entities, such as Crook’s attorney, who has no legal duty to provide them. Again, the CJN declined. “Simply, they are the city’s records and it is the city’s duty to provide them,” Lefton said. “This was not a complex case.”

The incidents detailed in the demand letter were previously investigated by Carole Rendon, a partner at BakerHostetler of Cleveland, who was hired in August 2019 by Beachwood City Council as special counsel to investigate the mayor’s conduct. Rendon and an associate from BakerHostetler presented their findings in an executive summary that they read into the record at an Oct. 30, 2019, special city council meeting.

At the meeting, Rendon said 14 of the 24 allegations regarding the mayor were substantiated or deemed highly credible “to a degree at a minimum is inconsistent with the city’s expectations regarding appropriate workplace conduct.” Council then voted unanimously to close the investigation into the mayor, who apologized at the meeting on Oct. 30, 2019. Horwitz apologized for his conduct, promised to apologize to the employees he may have offended and said he would undergo sensitivity training.

On Nov. 21, 2019, he told the CJN he had undergone a two-hour training with Impact Solutions of Beachwood, paid for by the city.

The CJN reported in July 2020 the city had paid $79,098.43 in settlements, attorney fees and other costs over allegations against Horwitz since he took office in January 2018. That figure does not include the $16,000 paid to Crook or the $5,386.65 in lawyers’ fees and expenses associated with that case, as those costs were borne by NORMA. It does include the $2,500 deductible Beachwood paid to the insurance company to resolve the matter.

Added to that, $31,479 was paid to The Lefton Group, LLC, to cover the cost of the CJPC’s legal fees through the insurance group NORMA, bringing the total amount paid out related to the mayor’s conduct, ensuing investigations and litigation to more than $130,000. The CJN made a public records request May 10 seeking documentation of all the city’s fees associated with the CJPC lawsuit, including Beachwood’s attorneys’ fees. As of May 19, the request is still pending.

Calta resigned April 10 to take a position with Mansour Gavin LPA of Cleveland and Independence.

Council then retained Calta as interim law director to assist with the transition and to complete pending matters at $240 per hour, according to a public records request made by the CJN.

L. Stewart Hastings, Jr. was hired as Calta’s successor and approved by council May 10. His starting salary is $122,413.91, plus benefits.

The CJN previously reported Hastings said his goal is “to lower the temperature” of news coverage of the city, speaking in reference to the city’s recent legal entanglements.

Lefton said it is rare for news organizations to sue for public records being denied even though they are legally entitled to the records, due to the expense of hiring a lawyer and related fees. However, the CJPC pursued the lawsuit to stand up for Beachwood’s residents who deserve to know what is going on and how the city is spending its money, she said. The CJPC was never seeking any information that was not in the public record, thus it should have been accessible to anyone – citizen or journalist – who requested it.

Although it can be costly for news organizations to pursue legal action over public records, if journalists strongly believe they are being denied access to records they are legally entitled to, their publisher may want to contact a lawyer with experience in the matter, Lefton said. The lawyer should be able to determine from a description of what is sought whether those documents could be withheld legally or if the news organization has a potentially successful case.

“When there is not an exception to the Public Records Act, the records must be provided,” Lefton said. “What this case should show is that when the records are public and there is no exception, you should file suit and you can get your attorney’s fees.”

Moreover, maintaining an open line of communication between governments and news outlets is essential to transparency, Lefton said.

“The bottom line is that if a person believes that there is a violation, don’t sit on it, don’t be quiet, don’t turn a blind eye, but call somebody and really try to get to the bottom of it because that will set the tone for all your future relationships with the public entity,” she said.