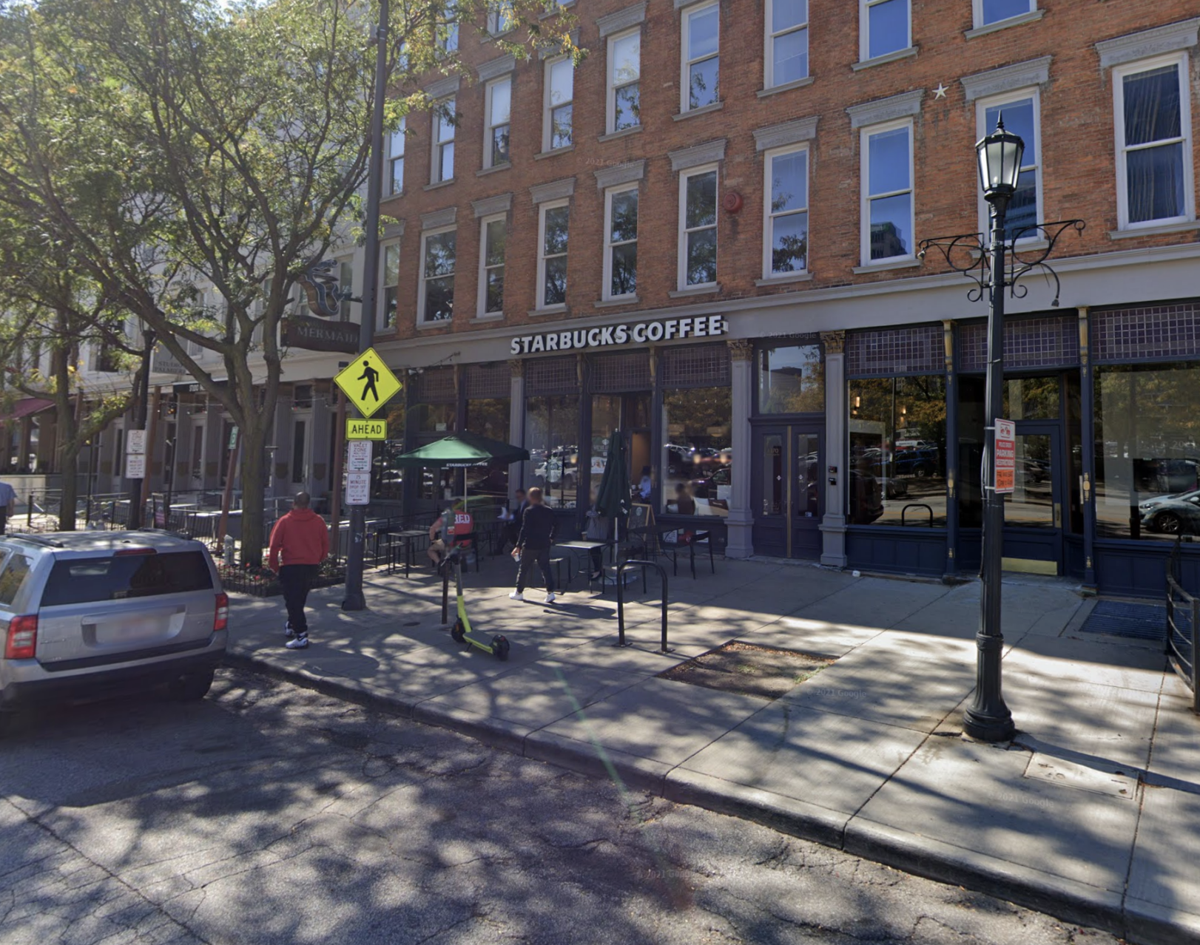 Pro-union pins sit on a table during a watch party for Starbucks' employees union election, Dec. 9, 2021, in Buffalo, N.Y.

Workers at the Starbucks at the West 6th Street location in Cleveland filed for National Labor Relations Board election Jan. 10, following similar calls across the country.

About a month ago, a Buffalo, N.Y., store of the coffee chain voted to unionize as workers in Boston, Knoxville, Chicago, Broomfield, Colo., Mesa, Ariz., Seattle and Eugene, Ore., filed for their own elections.

The Cleveland workers sent a letter to Starbucks CEO Kevin Johnson signed by 12 of the store’s 20 employees, citing COVID-19 safety measures in their intent to unionize.

“Starbucks partners invest their safety, time, and well-being to serve at the forefront of the customer service industry, and this has been especially true during the COVID-19 pandemic,” the workers wrote. “(However), we do not feel we have been adequately cared for in terms of consistent guidelines or effective safety measures.”

Following the union vote at the Buffalo store, Rossann Williams, president of Starbucks North America, wrote a letter to the companies’ partners with the path forward.

“From the beginning, we’ve been clear in our belief that we do not want a union between us as partners, and that conviction has not changed,” Williams wrote. “However, we have also said that we respect the legal process.”

Starbucks has shared its COVID-19 response stating throughout the pandemic, stores have followed the Centers for Disease Control and Prevention and local public health authorities guidelines, will be mandating the vaccine or require weekly testing, and offer isolation pay to partners.

Still, some employees that have sought to unionize do not feel that enough has been done for their safety.

“It’s very anxious, in a way, working during the pandemic,” Joseph Nappi, a Starbucks employee since June 2021 who has been at the West 6th Street store since September, told the Cleveland Jewish News Jan. 10. “We work in a very tight space and we haven’t been provided with things like KN95 masks or N95 masks from our company.”

Seventeen of the 20 partners at the Cleveland location signed union authorization cards and when the store holds its election, which could be in six to 10 weeks, a simple majority will be needed to form a union, he said.

Nappi shared what the next steps would be for the store if a union is formed.

“We want to negotiate a contract with the company, and we’d like to see things like wages addressed, COVID safety and also the amount of time we can use to train partners at our store so that they have the tools necessary to succeed in this job,” he said.

“My starting wage was $12.50 per hour. There is a lot of variation when it comes to starting wages at our store. I know one partner that’s been with Starbucks longer than me that makes $11 per hour.”

The workers want to join the Chicago and Midwest Regional Joint Board of Workers United, a Service Employees International Union affiliate, according to Nappi.

According to the Jewish Telegraphic Agency, when three Buffalo-area locations sought unionization last month, the company closed stores and invited employees to a talk given by Howard Schultz, the former CEO and chairman.

In his speech, Schultz invoked the Holocaust as he attempted to dissuade employees from forming a union.

“According to eyewitness accounts and a transcript of the meeting, Schultz ‘noted that only a small portion of prisoners in German concentration camps received blankets but often shared them with fellow prisoners,’ and then remarked, ‘What we have tried to do at Starbucks is share our blanket,’” the JTA reported.

One of those Buffalo stores was successful in unionizing and according to The Associated Press, six employees later formed a picket line outside the store saying they lacked the staff and resources to work safely amid surging COVID cases.

Starbucks across Greater Cleveland will be shuttering their dining rooms due to COVID-19-related factors.