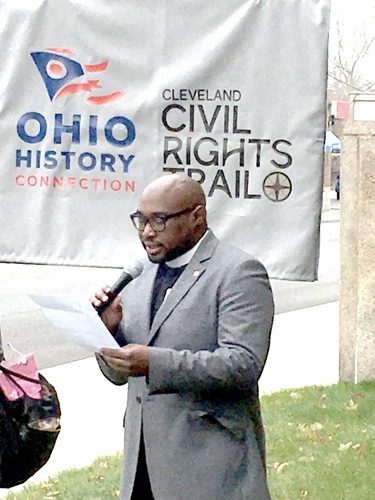 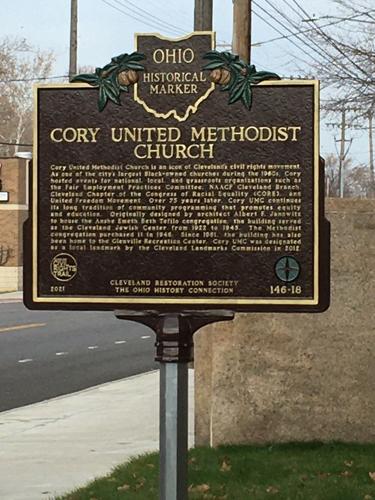 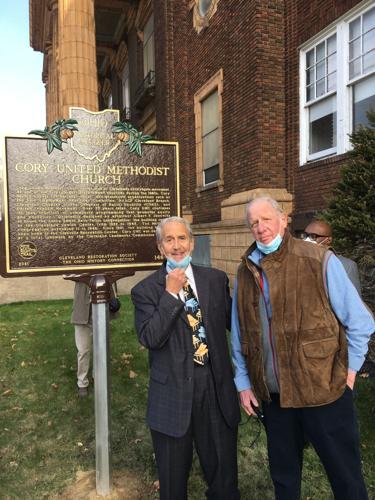 Cory United Methodist Church was honored Dec. 10 with the installation of a brass marker on its front lawn at 1117 E. 105th St. in Cleveland’s Glenville neighborhood, designating it as a historic site on Cleveland’s African American Civil Rights Trail.

The dedication was led by The Cleveland Restoration Society and Ohio History Connection, who also are behind the Civil Rights Trail markers, according to a news release. Ten other Civil Rights Trail markers will be placed at locations connected with the civil rights movement between 1964 and 1976, including Glenville High School and throughout the Hough neighborhood in Cleveland.

During the civil rights movement in the 1950s and 1960s, Cory was one of the largest Black churches, the release said. The church’s building was once home to the Cleveland Jewish Center which housed Anshe Emeth Beth Tefilo, the predecessor of Park Synagogue in Cleveland Heights and Pepper Pike. The church hosted many significant Black figures such as the Rev. Martin Luther King, Jr. and Malcolm X. According to the release, the church still features stained glass with Biblical themes, Jewish symbols and Hebrew inscriptions within its architecture.

The Rev. Gregory Kendrick, Jr. delivered a message ahead of the dedication ceremony. Dramatic readings of excerpts from the speeches that King and Malcolm X gave at Cory were recited, as well as messages from other dignitaries. Park Synagogue members Roger Kramer, Elliott Simon and Ellen Petler were among the attendees. A luncheon followed in the church’s ballroom.

Additionally, the National Park Service awarded a $500,000 grant to the church to restore its brickwork and terracotta. The Cleveland Restoration Society is also nominating the building to the National Register of Historic Places, the release said.