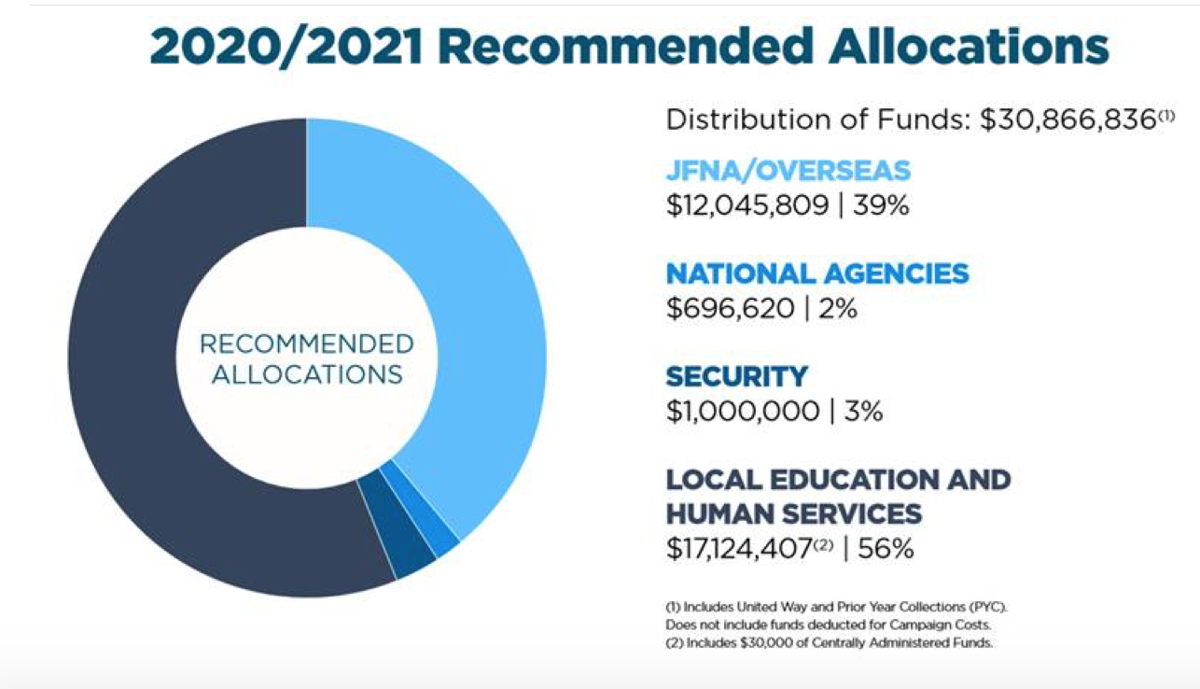 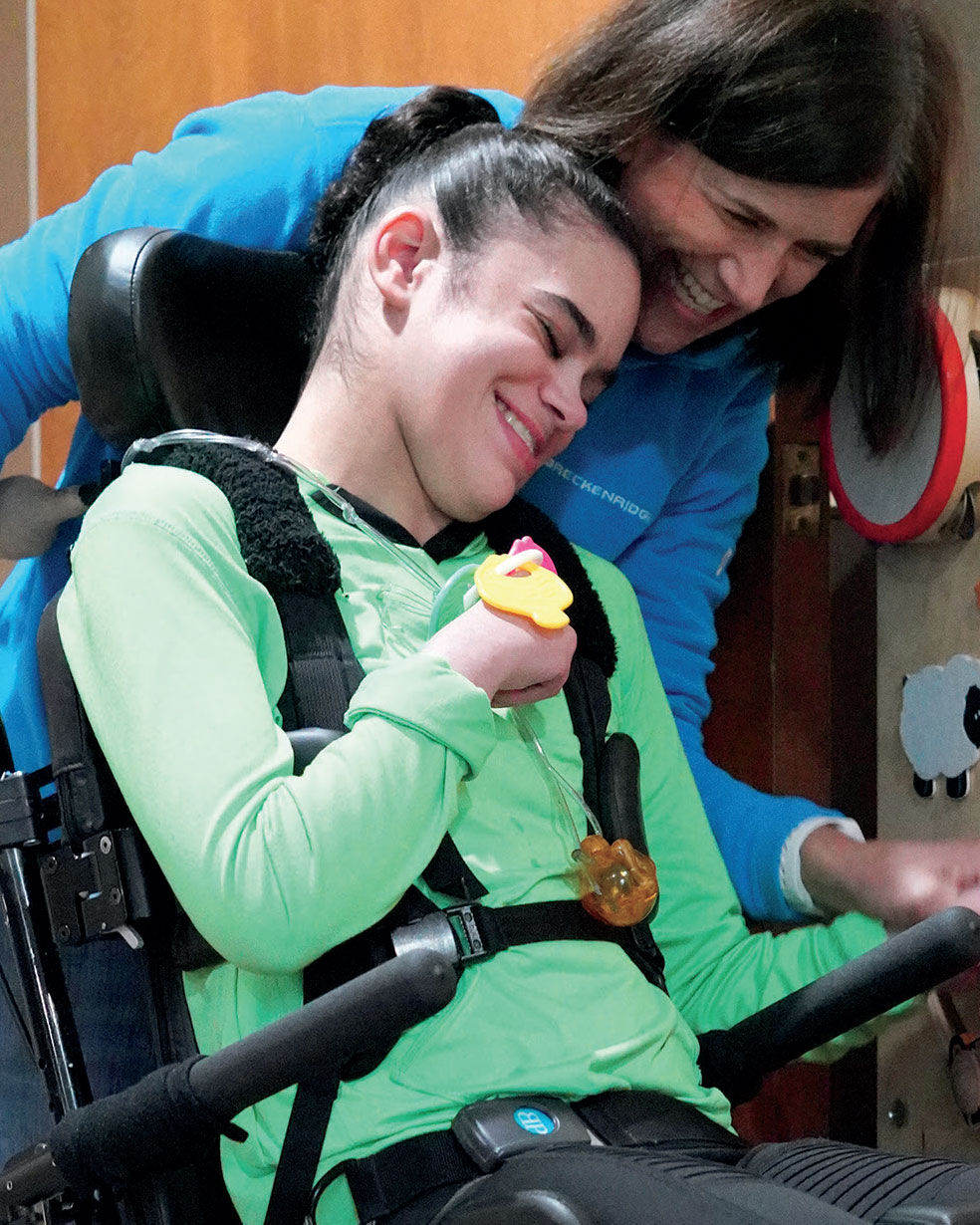 Dr. Jill Miller and her daughter, Maddie, enjoy spending lots of time together at Forever Children, one of more than 60 supported living sites in Cuyahoga and Summit counties that JFSA operates for individuals with developmental disabilities and adults with mental illness. 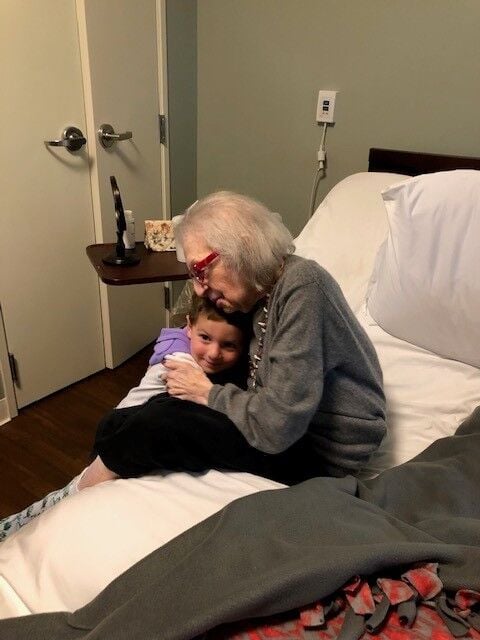 Jean Gold gives a special thank you to Matthew Hirsch for his special Mitzvah Day delivery. JFSA’s annual Karen B. Newborn Mitzvah Day is one way volunteer families with children participate in delivering Rosh Hashanah food baskets to older adults who are homebound or have no local family with whom to enjoy the holidays. 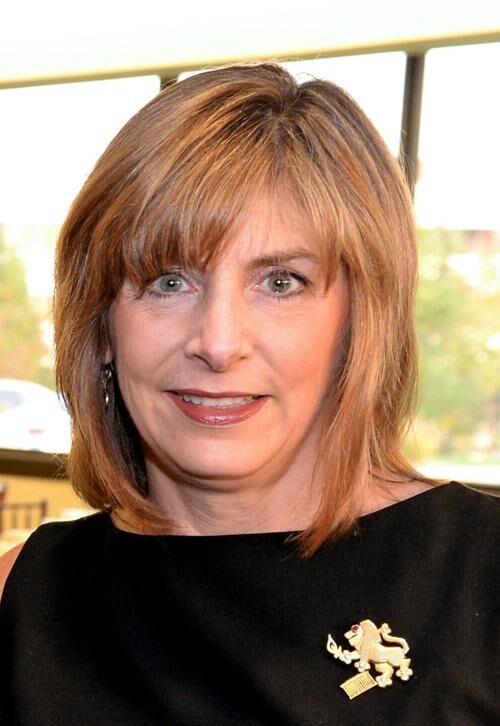 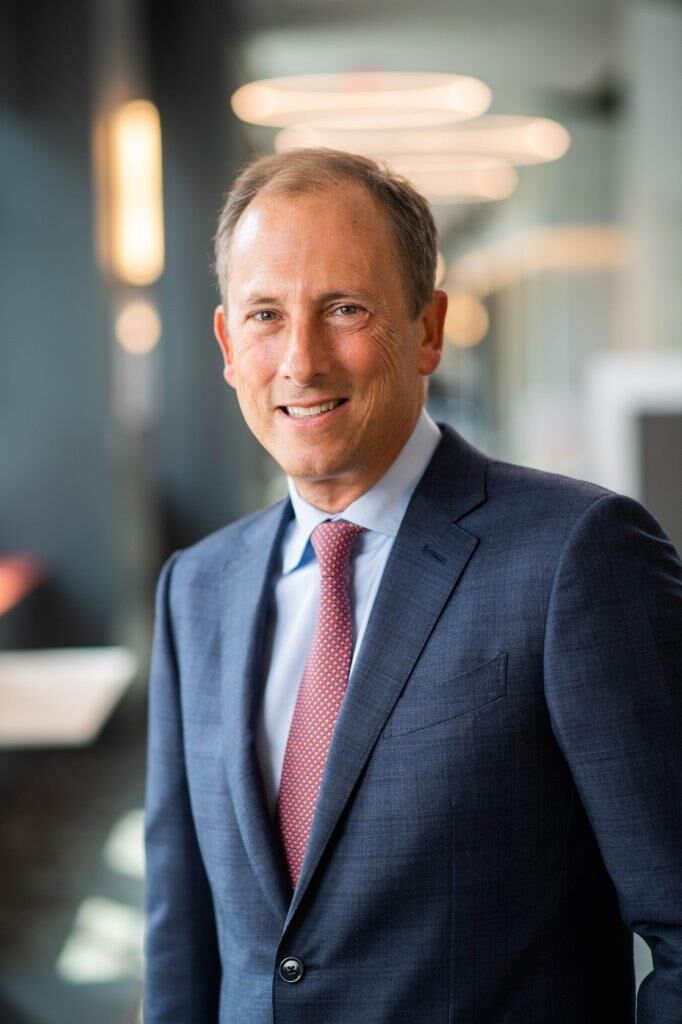 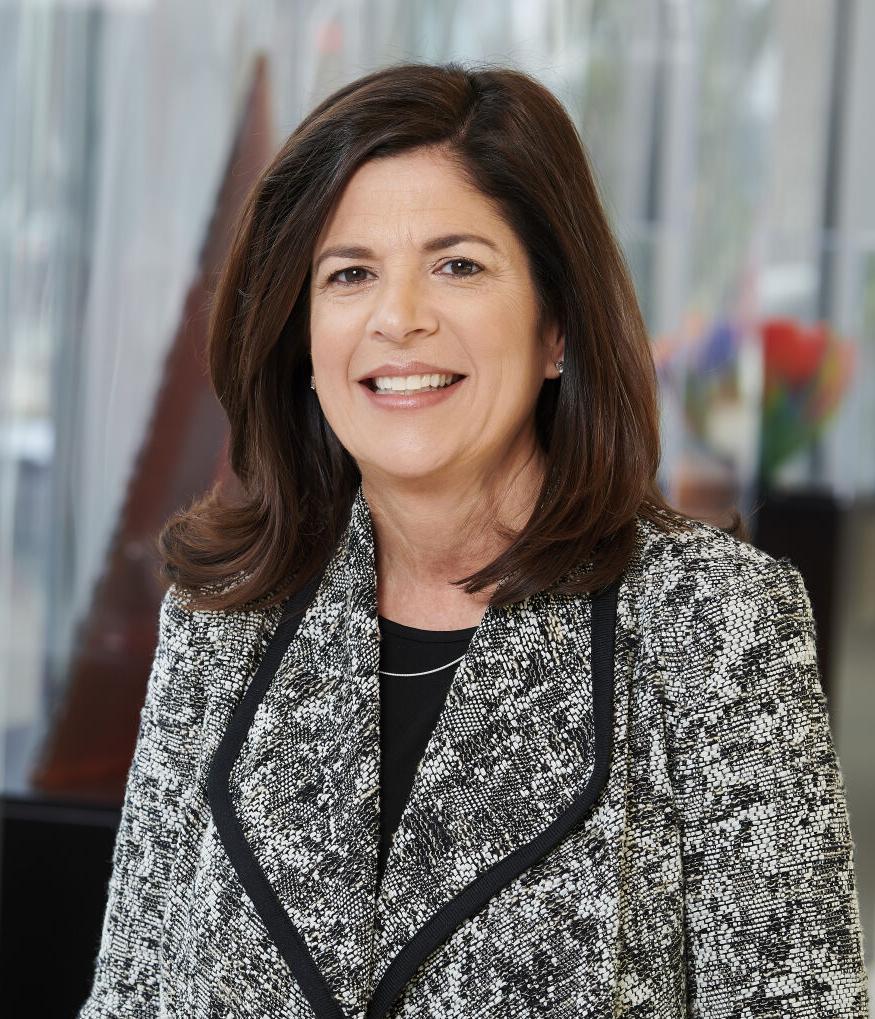 Dr. Jill Miller and her daughter, Maddie, enjoy spending lots of time together at Forever Children, one of more than 60 supported living sites in Cuyahoga and Summit counties that JFSA operates for individuals with developmental disabilities and adults with mental illness.

Jean Gold gives a special thank you to Matthew Hirsch for his special Mitzvah Day delivery. JFSA’s annual Karen B. Newborn Mitzvah Day is one way volunteer families with children participate in delivering Rosh Hashanah food baskets to older adults who are homebound or have no local family with whom to enjoy the holidays.

As COVID-19 rocks agencies, distributions from the Jewish Federation of Cleveland to Jewish agencies will be level funded in the 2020-21 fiscal year.

“The impact has been really massive,” said Beth Wain Brandon, Federation allocations committee chair. “Revenues really crashed for a lot of our agencies during the first few months of COVID … as they had to shut down programs or departments or divisions, and a lot of their expenses also had to increase – a lot.”

As agencies pivoted to new forms of service delivery, the needs of individuals increased, partly due to layoffs associated with COVID-19.

“We certainly didn’t want to cut anybody during this time, but we weren’t really in a position to make increases either,” Wain Brandon said. “So we made a huge effort to keep everybody stable.”

“There’s always threats and the circumstances are always changing,” she said, “And with the onset of the coronavirus pandemic, the security needs really didn’t diminish.”

She said security professionals are helping schools plan for reopening with multiple entrances to comply with social distancing requirements. They are also assisting synagogues and other institutions plan for the use of $3.5 million in federal and state security grants that were awarded this spring.

The Federation is raising its commitment to security, which is budgeted at $3.9 million in 2020-21. The commitment from campaign dollars was $535,000 in 2019-20, and will be $1 million in 2020-21. Just $115,000 of the increased distribution comes from the annual campaign with the balance, $350,000, taken from reserves in prior year collections. The rest of the security budget is paid by philanthropic sources and participation by other institutions. 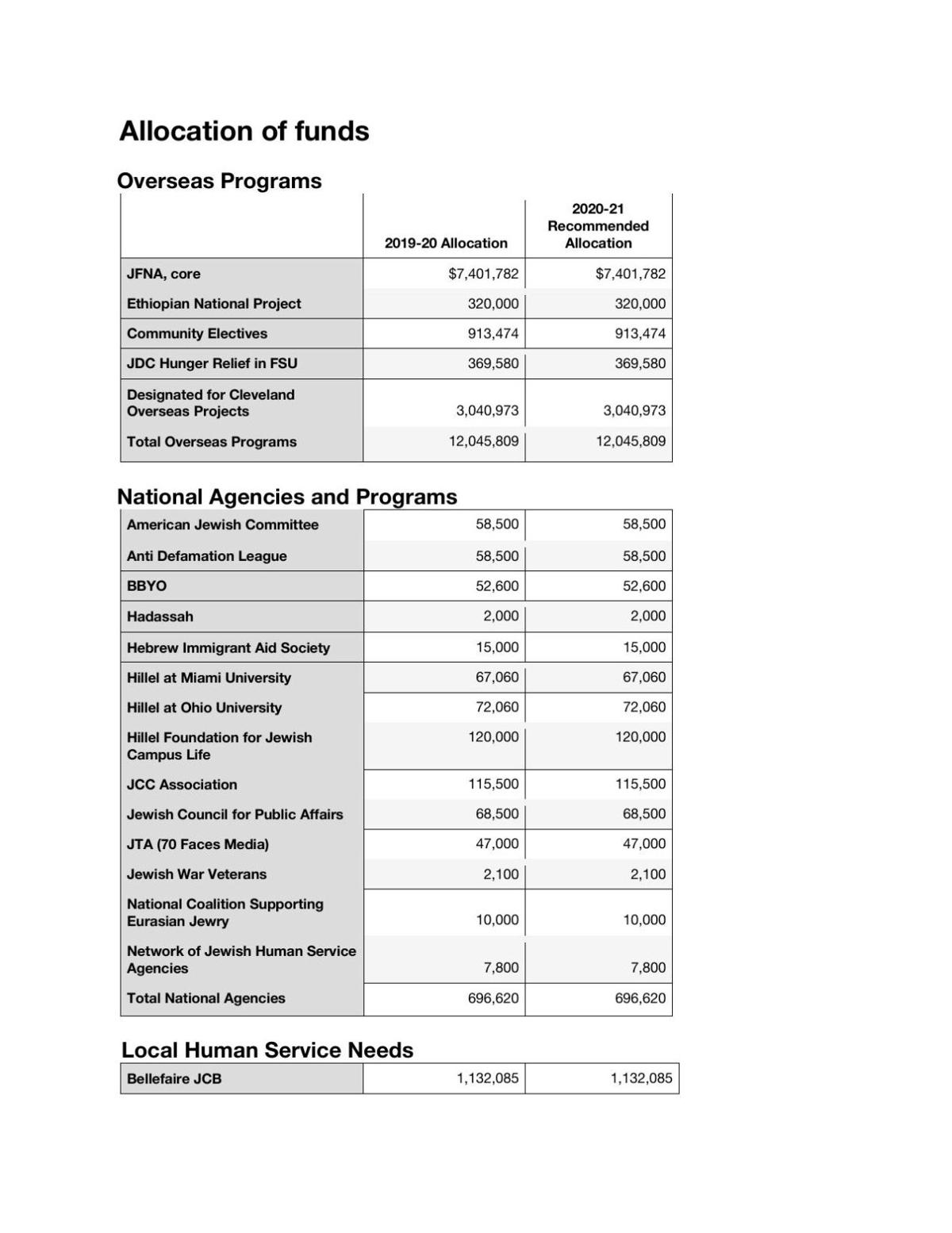 That fund goes to a panoply of programs including early childhood education, congregational schools, day schools, curriculum development, professional development, retreats and teen programs, according to Seymour Kopelowitz, executive director of the Jewish Education Center of Cleveland, which distributes the funds.

In planning for an uncertain financial climate and a potential impact on donors, the Federation bumped up its reserve for shrinkage, both in amount and percentage. The line item set aside for shrinkage will go up by $98,525 from $1,308,325 to $1,406,850.

“The rate we used this year is the same rate we used after the crash of 2008,” Wain Brandon said. “So, last year our shrinkage rate was 4%, and this year we’re increasing it to 4.25% in case there’s a few more people who are unable to pay their pledges. We obviously hope people will be able to fulfill their commitments to our campaign because it really supports the community, and the whole community is suffering. But we wanted to be a little bit more conservative this year in case there are people who are unable to. If there’s more cash collected, those funds will be used in future years to cover shortfalls.”

In fact, this year, prior year collections are being used to cover a $212,069 gap left by United Way of Greater Cleveland.

“We were able to use prior year collections to cover that so that we didn’t feel that loss this year,” Wain Brandon said. “We anticipate there may be other cuts in the future, so we’re not sure what next year will look like. … We have a very strong partnership with (United Way) and a very close relationship.”

The true cost of running the campaign, Wain Brandon said, approaches 10% of the full amount raised.

The Federation’s largest single distributions typically go to national and international agencies, and this year, those allocations remained at the same level they were in 2019-20: $12,045,809.

Lynne Cohen, Cleveland overseas committee chair at the Federation, said the funds will be needed.

“We know that our sister cities of Beit Shean/Valley of Springs, Israel, and St. Petersburg, Russia, are reeling from the effects of COVID-19 just like Cleveland,” she said. “There are deep economic implications in both communities which affect people’s ability to work and continue to provide for themselves and their families. As such, we have been in close contact with all of our overseas partners and are working with them to reallocate dollars to their communities’ most pressing needs.”

Wain Brandon, who has been chair of the committee for more than three years, said this year’s process has been more time intensive.

She praised Federation staff for jumping in and helping out, adding that each agency that was eligible to receive Paycheck Protection Program loans received them.

“And they had a lot of help from the Federation in order to be educated and to apply for those loans,” she said.

In a typical year, liaison teams hold 60 meetings. This year, there will be about 30 more, with meetings taking place throughout the summer, when there is typically a break.

“Because we have these longstanding relationships, we’ve been able to work together so well to help everybody weather the storm,” Wain Brandon said. “All of the sudden we were all in a crisis, but we were all in it together, and we were all coming up with solutions together, trying to figure out what the best practices would be.”

J. David Heller, Federation board chair, said the success of the campaign will help agencies and individuals.

“Thanks to the incredible generosity of our community during the Federation’s annual campaign, we are able to provide much-needed stability to our local, national and international beneficiaries during such an unprecedented time,” Heller said. “Each year, Federation’s allocations committee goes through a thorough and deliberate assessment of community needs to ensure that the funds raised are distributed effectively and efficiently. I am so grateful to Beth and her fellow committee members for the tremendous work they did under these unique conditions.”

Allocations Report to the Board of Trustees