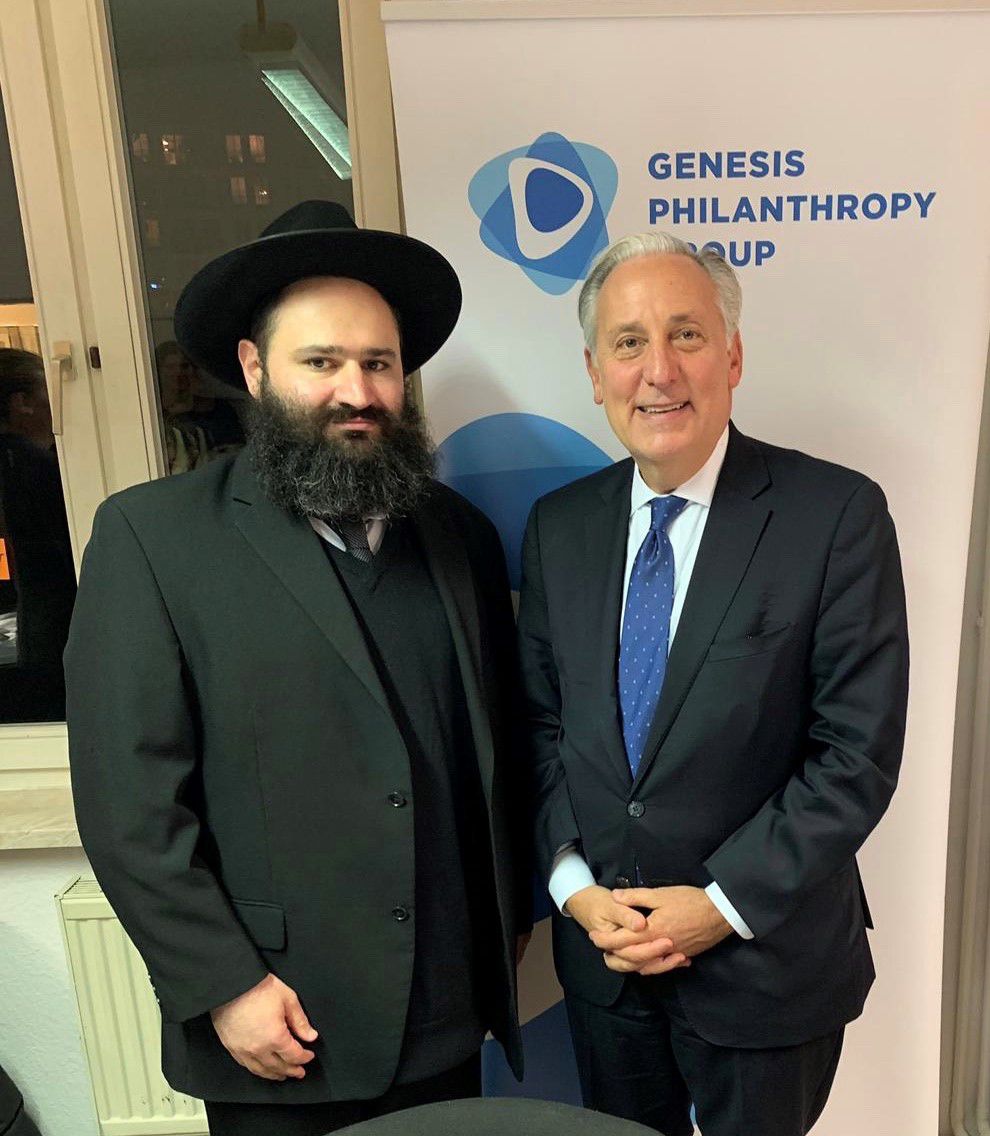 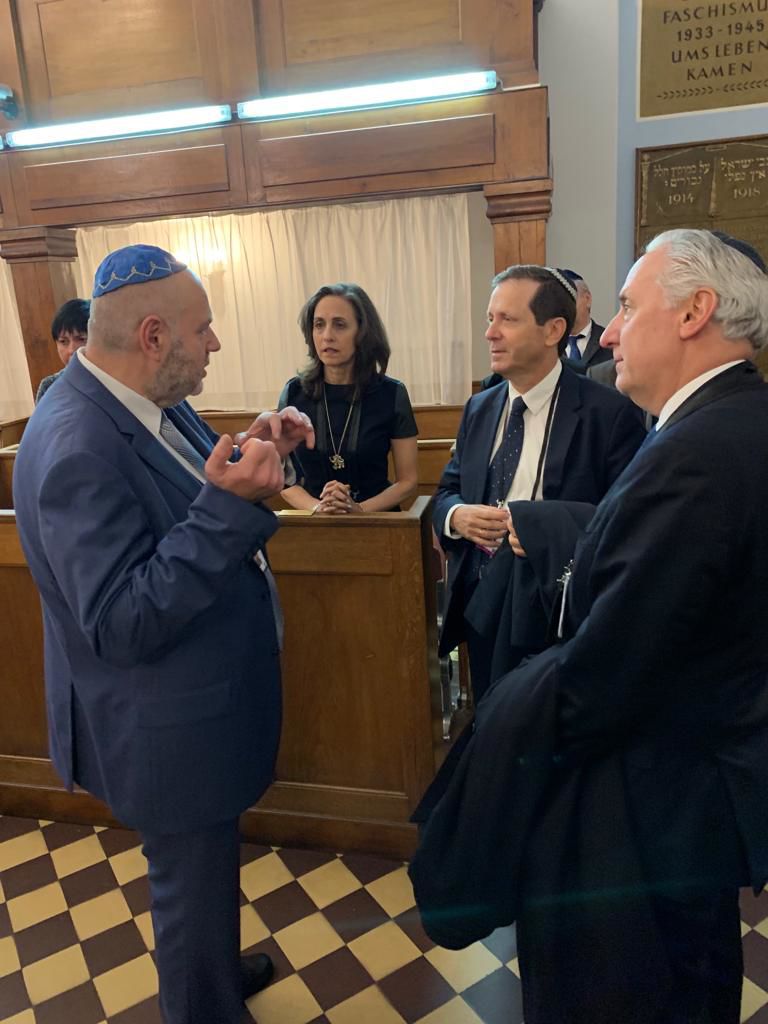 Max Privorotzki, from left, head of the Halle Jewish community, speaks with . Isaac Herzog, chairman of the executive of The Jewish Agency for Israel, and Eric D. Fingerhut, president and CEO of the Jewish Federations of North America, and inside the synagogue in Halle, Germany on Nov. 7, 2019. 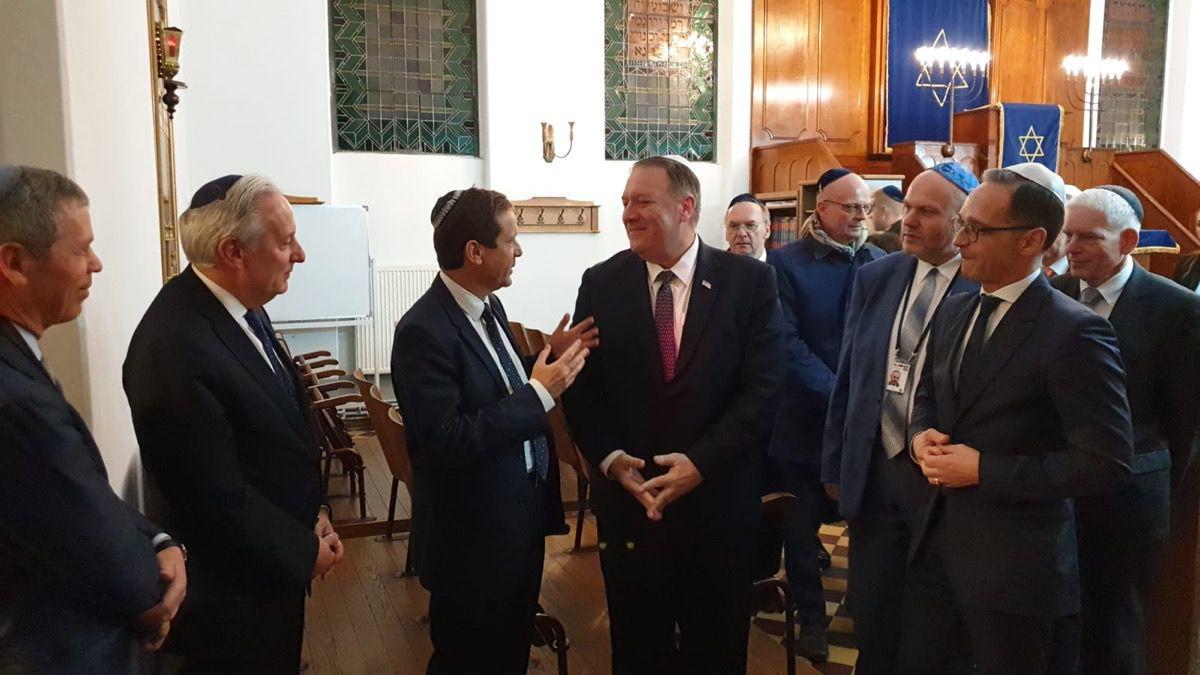 A month after the Yom Kippur attack on a synagogue in Halle, Germany, Eric D. Fingerhut described the atmosphere as “still very raw” and “emotional.”

The president and CEO of Jewish Federations of North America spent time in the synagogue that came under fire from the outside. Armed doors held back the shooter from entering, who shot and killed two people outside.

A man identified as Stephan B., 27, was arrested in Zeitz, about 31 miles away from Halle after the shootings, according to The Associated Press. Authorities said his motives were both anti-Semitic and far right extremist ideologies.

“When I was there, you could still see the bullet holes in the door where the gunman tried to get in,” Fingerhut told the Cleveland Jewish News after landing in Washington, D.C. Nov. 8. “We talked to one couple that had been in the synagogue. And the husband had – when he saw what was happening – had run to secure the back door, had closed the back door so that they could be safe on all sides because, of course, they didn’t know how many shooters there were. They only knew they were under attack. And the emotions from that (were) significant.”

Fingerhut, who grew up in Greater Cleveland and served as an Ohio state senator and U.S. congressman, said his mission had three purposes: to stand in solidarity with the Jews of Halle, to address slow German police response and to bring back lessons to the JFNA.

Fingerhut said he hoped to “prod the government of Germany – together with the secretary of state and the chairman of the executive of The Jewish Agency (for Israel) – to take these threats to the Jewish community in Germany more seriously, and to take the necessary steps.”

The Jewish community in Germany is growing, he said, with an estimated 100,000 Jews, many of them from countries that were part of the former Soviet Union. While anti-Semitism arises primarily from the far right in Germany, he said there was awareness of far-left extremism as well.

Fingerhut said the Nov. 7 meeting was held in concert with a visit from U.S. Secretary of State Michael Pompeo, who “made a strong statement about anti-Semitism.” Isaac Herzog, chairman of the executive at the Jewish Agency, attended as did both state and federal authorities in Germany, including German Foreign Minister Heiko Maas. David T. Brown, JFNA national campaign chair, was also present.

“While we had provided the security through the Jewish Agency for the synagogue, the police had not been responsive, were not responsive that day,” Fingerhut said. “It took 15 minutes for them to come, and there was real concern about the responsiveness of the local police authority.”

Fingerhut said he received some reassurance.

“I would say that the German officials were actually quite forthright in acknowledging that, that was the case and of course assured us that they were taking steps to correct it,” Fingerhut said. “We were briefed by a representative of the government in the morning who shared a whole package of steps that the government has taken since this attack to try and improve the response. The foreign minister also assured us that they were taking steps.”

Fingerhut said he learned about the division of responsibility for law enforcement among Germany’s state and federal government. The state government was responsible for the response to the shootings, he said.

“Halle happens to be in a state that is in the part of Germany that was part of the former East Germany – the former communist East Germany,” Fingerhut said, adding that the city has a population of about 250,000. “It’s suffered from significant economic downturns since the collapse of communism and the reunification. And it’s an area frankly where there is concern about rising right-wing anti-Semitic sentiments. … And again, they’ve committed to addressing it.”

Reflecting on what he brings back to the JFNA, which holds its national FedLab 2019 from Nov. 10 to Nov. 12 in Washington, D.C., Fingerhut spoke of the decision of four Jewish foundations in Europe to form The Pillar Foundation, devoted solely to security.

In addition, he said, there were lessons about security.

“They emphasized again that you need the hardware,” he said. “You need the cameras, the hardened doors, etc., windows and such. But ultimately people need to know how to react in a crisis. And the fact is that the people in the synagogue in Halle, thank G-d, did react appropriately. They saw what was happening. … They used the security cameras. They didn’t panic. They locked the doors. … They sheltered in place. They took all the appropriate steps, and we know that doesn’t always happen. … So they really emphasized the training and the drilling being very important.”