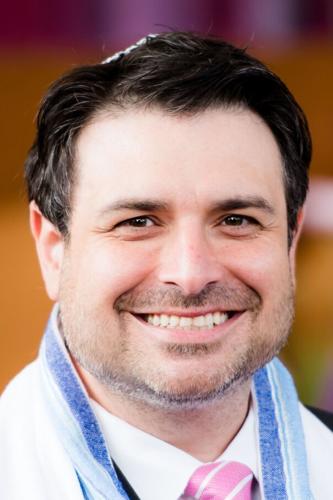 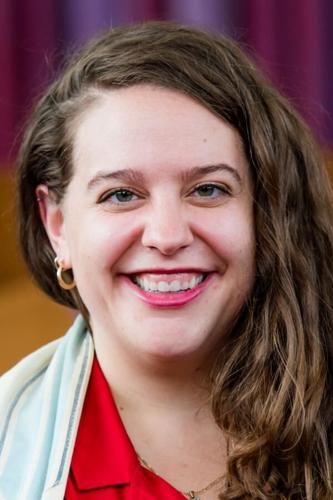 Associate Rabbi Elle Muhlbaum and Cantor Vladimir Lapin of Anshe Chesed Fairmount Temple came to the Beachwood temple two years ago, but are already envisioning a larger role in the Cleveland Jewish community.

Muhlbaum will be overseeing the temple’s new Tamid initiative to engage with young adults, while Cantor Lapin, founder of Music at TBE, plans to bring different music styles to Cleveland.

“We worked on Long Island for four years following ordination at Temple Beth-El in Great Neck and then we moved here the summer of 2020,” Muhlbaum told the Cleveland Jewish News May 17. “So at that time, Vlad took over as the cantor and I, in my first year, worked as our lower school director, and then my role expanded July of last year.”

The married couple lives in University Heights with their two children and a dog. Muhlbaum grew up in Cincinnati and said she is “an Ohioan at (her) core.”

In her role as associate rabbi, Muhlbaum oversees the educational programming at the synagogue, leading the educational team of administrators, the upper school director and early childhood center director, as well as teaching a weekly Shabbat morning Torah study group for adults.

The Tamid initiative set to launch this summer is the brainchild of Senior Rabbi Robert Nosanchuk and a fundraising effort during his 10-year celebration a few years ago, Muhlbaum said.

“He felt really strongly about teen engagement, young adult engagement, helping folks feel connected to Judaism in different ways and creating lots of on ramps for engagement and connection,” she said.

The name for the initiative, meaning eternal or everlasting, draws inspiration from the Ner Tamid, the eternal light that shines in every synagogue or Jewish prayer space to symbolize God’s presence in the community.

“In thinking about that symbol, the Tamid initiative’s mission is to create an ongoing ... connectivity to Judaism and Jewish practice and Jewish thought and ritual life,” Muhlbaum said. “What the Tamid initiative will essentially do is create on ramps for engagement for two main groups of people all in the same age range.”

The target group for the initiative is 18 to 30 year olds who are either connected to Fairmount Temple as alumni and have moved away from the area, or are people in Greater Cleveland looking for a spiritual home. As part of the program, participants will be given a free membership to Fairmount Temple and be able to participate in a range of virtual and in-person programming.

While the initiative is still in the works, Muhlbaum said the plan is to have events around holidays and Jewish moments, as well as find ways to meet the needs of the different demographics in the age range. This may be monthly meetings online or in person for young parents to socialize or to connect college students.

With a range of ages and experiences in the target group and by inviting the greater community to join through virtual programming, the Tamid initiative aims to meet people where they are in life and in the world.

“I think as a larger Jewish community, and I don’t mean Fairmount Temple, I mean as a Jewish community writ large, this is an age demographic that we can do a better job serving,” Muhlbaum said. “So, this is one way we are experimenting and doing that. And we hope it will be a great success.”

The Tamid initiative will partner with Fairmount Young Professionals, which serves members and nonmembers locally in the community, and will attempt to expand the model to reach more young adults and serve them in different ways.

As a leader of the educational program at Fairmount Temple, Muhlbaum works with some of the youngest in the community, starting at 18 months old to the oldest adult learners.

“I feel like one of the things I am so drawn to as a rabbi is intergenerational programming,” she said. “So, it’s kind of my calling to work with people of all different age groups to see where there is room to connect them.”

She added that the Tamid initiative will have some educational programming, but it won’t all be educational.

“I’m really excited about this work,” Muhlbaum said. “I think there is so much potential here and so much opportunity, and we’re really looking at it as a chance to learn about who is here and who we can connect with.”

Before arriving in Cleveland, Muhlbaum and Lapin served at Temple Beth-El in Great Neck, N.Y., where Lapin founded Music at TBE, an annual concert series which brought Jewish and secular music to the community from classical to jazz to contemporary to folk music performed by choirs and solo artists.

“The underlining goal was to build community, and it’s something I hope to create here in Cleveland at Fairmount Temple,” Lapin, who serves as chair of the fundraising committee for the American Conference of Cantors executive board, told the CJN May 20.

He said he has already started this here by including new contemporary music ensembles and jazz musicians in Friday night services at the temple.

In his role as cantor, Lapin joins the clergy team, which also includes Rabbi Joshua Caruso, to oversee all the musical and ritual aspects of the synagogue. He also oversees the b’nai mitzvah program and leads Shabbat singing every Friday with the early childhood center.

“One of the things I am really proud of and excited about doing is the b’nai mitzvah program,” he said. “I’m really trying to elevate the meaning that the families are experiencing when their children become bar or bat mitzvah at the temple, and I do that by really meeting the kids where they’re at.”

Lapin said he wants them to have a grounding in the rituals, but also to leave the experience feeling connected and rooted to Judaism and the community.

“I want them to feel pride in what they were able to accomplish, and I want them to look back at this moment and to be one of the highlights of their life for them,” he said.