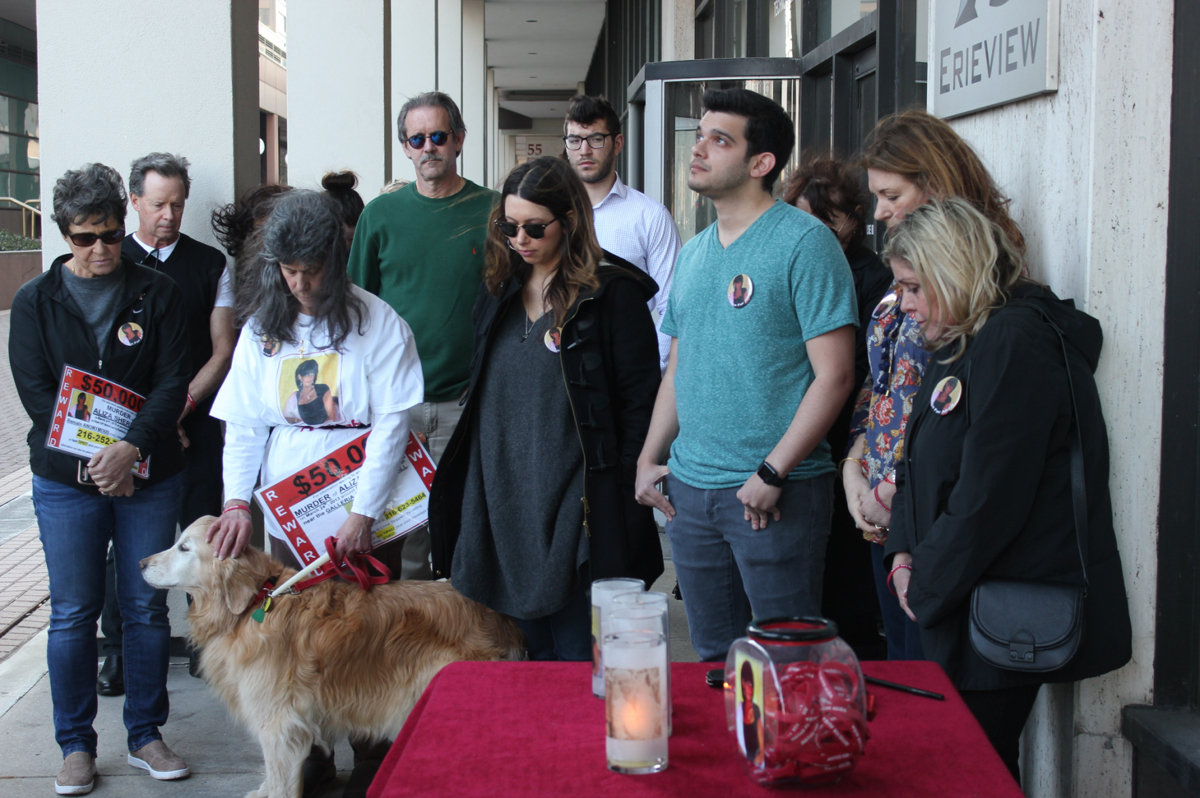 Jason Sherman, Aliza Sherman's son, looks to the skies above as others bow their heads during a moment of silence to mark the four-year anniversary of his mother's murder in downtown Cleveland. He was joined by his sister, Jennifer, center, and many of Aliza's friends during the March 24 ceremony. 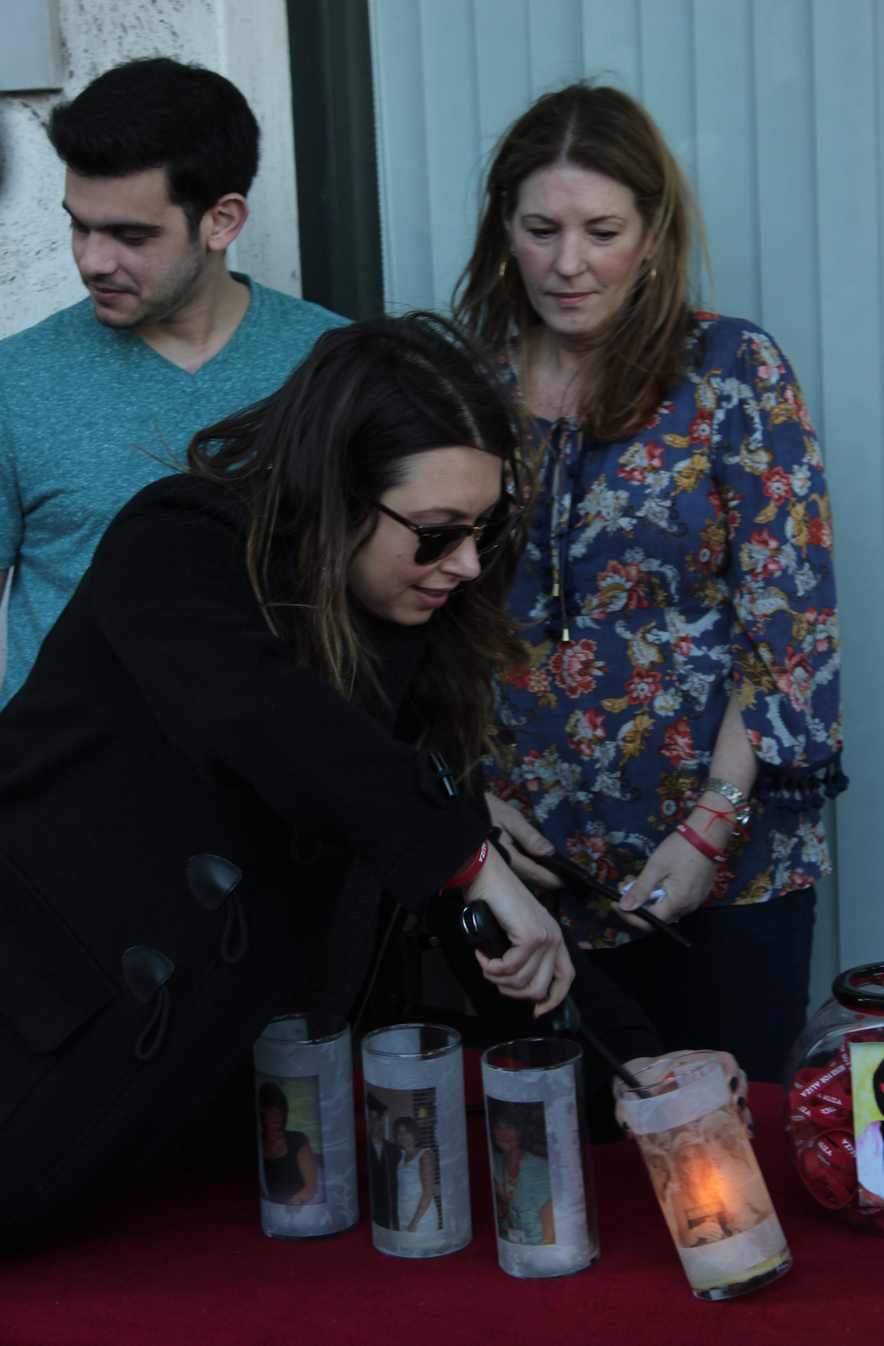 Jennifer Sherman, Aliza Sherman's daughter, lights one of four candles to mark the four-year anniversary of her mother's murder in downtown Cleveland. Her brother, Jason, and Aliza's longtime friend, Jan Lash, look on during the March 24 ceremony.

Jason Sherman, Aliza Sherman's son, looks to the skies above as others bow their heads during a moment of silence to mark the four-year anniversary of his mother's murder in downtown Cleveland. He was joined by his sister, Jennifer, center, and many of Aliza's friends during the March 24 ceremony.

Jennifer Sherman, Aliza Sherman's daughter, lights one of four candles to mark the four-year anniversary of her mother's murder in downtown Cleveland. Her brother, Jason, and Aliza's longtime friend, Jan Lash, look on during the March 24 ceremony.

It was a year of firsts as family and friends gathered to mark the four-year anniversary of Aliza Sherman’s murder in downtown Cleveland.

No, it wasn’t the first those who gathered want most – the first anniversary on which they can say justice for Aliza has been served in what remains an unsolved case.

But it was the first year that weather cooperated for the ceremony. It was a sunny – if windy – day with unseasonably warm temperatures, which the former Beachwood nurse’s daughter took to heart.

“It’s the first year it hasn’t been freezing or raining, and I thought maybe she’s sending us a sign,” said Jennifer Sherman, who has often described her mother’s fondness for sunshine. “Maybe it’s a sign that this will be the year we get justice.”

About 30 people attended the March 24 ceremony at 75 Erieview Plaza, near the intersection of East 12th Street and Hamilton Avenue in downtown Cleveland, the site outside Aliza Sherman’s divorce attorney’s office where she was stabbed to death on that same date in 2013.

“It’s my least favorite day of the year,” said Jason Sherman, one of Aliza Sherman’s three sons. He went on to acknowledge, however, that commemorating his mother with friends and family is in some ways therapeutic.

“Pretty much every year, as the day is approaching, I dread it, and it’s something I’m not really looking forward to,” he said. “But then every year, once the day comes, the first few hours are really rough, but it really gets better throughout the day. … I start getting texts and phone calls from hundreds of friends – some people I talk to every day, some people I talk to once a year just on this day.”

Helping lift his and his sister’s spirits this year was that they were joined by their younger brother, Jeremy, a student at Ohio University in Athens. While Jeremy didn’t attend the ceremony, he joined his siblings for breakfast that morning – marking the first time the three had been together on the date of their mother’s murder.

“Jeremy is the more outgoing and outrageous (sibling) in the group,” Jason Sherman said. “He adds a whole different dynamic, and having him there lightened the mood more than usual.”

Jennifer Sherman said, “I made them frozen waffles and I had to laugh because that’s what my mom used to make. It felt like old times.”

Representing a more somber first this year was the absence of Dr. Edward Czinn, Aliza Sherman’s brother, who remained in Fort Lauderdale, Fla., to care for his ailing mother, Doris Czinn, a Holocaust survivor and former Cleveland Heights resident.

“My grandmother is very sick, so he was unable to come,” said Jennifer Sherman, explaining her uncle is her grandmother’s primary caretaker. “I told him to just be there (for my grandmother). That’s what my mom would’ve wanted. He was pretty torn.”

“I’ve been a policeman for almost 33 years, and I’m involved with this one just a little bit more, only because of the family’s involvement,” he said. “Jennifer and Aliza’s friends, they were so open and honest with us. They kind of invited us in and they wanted to be partners with us to bring justice for Aliza, and we really appreciate that.”

In terms of progress on the ongoing investigation, updates have slowed to a standstill.

“Our circle of people we’re looking at is very small, and I’m pretty confident we’ve looked at everybody,” Tromba said. “We have a $50,000 reward out there, which is the largest ever in the history of Crime Stoppers, and we haven’t gotten any tips in the last year.”

To date, no one has been charged in Aliza Sherman’s murder, though her divorce attorney, Gregory J. Moore, faces charges related to the murder investigation. A trial is set to begin at 9 a.m. May 3 in Judge John D. Sutula’s courtroom at the Cuyahoga County Common Pleas Court.

Jennifer Sherman wouldn’t comment on the ongoing court case or Cleveland police’s ongoing investigation into her mother’s death, but she and others remain steadfast in their determination to help bring the killer to justice.

“Everything is still open and pending, so we’ll have to see how things unfold, but we haven’t lost hope,” she said. “It’s heartbreaking that we’re still here four years later, but at the same time, we’ll continue to come back every year until we see that justice is served.”

For the CJN’s complete coverage of the Aliza Sherman case, visit cjn.org/alizasherman.

In a newly filed court document related to a civil lawsuit against Dr. Sanford Sherman, depositions of those connected to the case paint a sor…