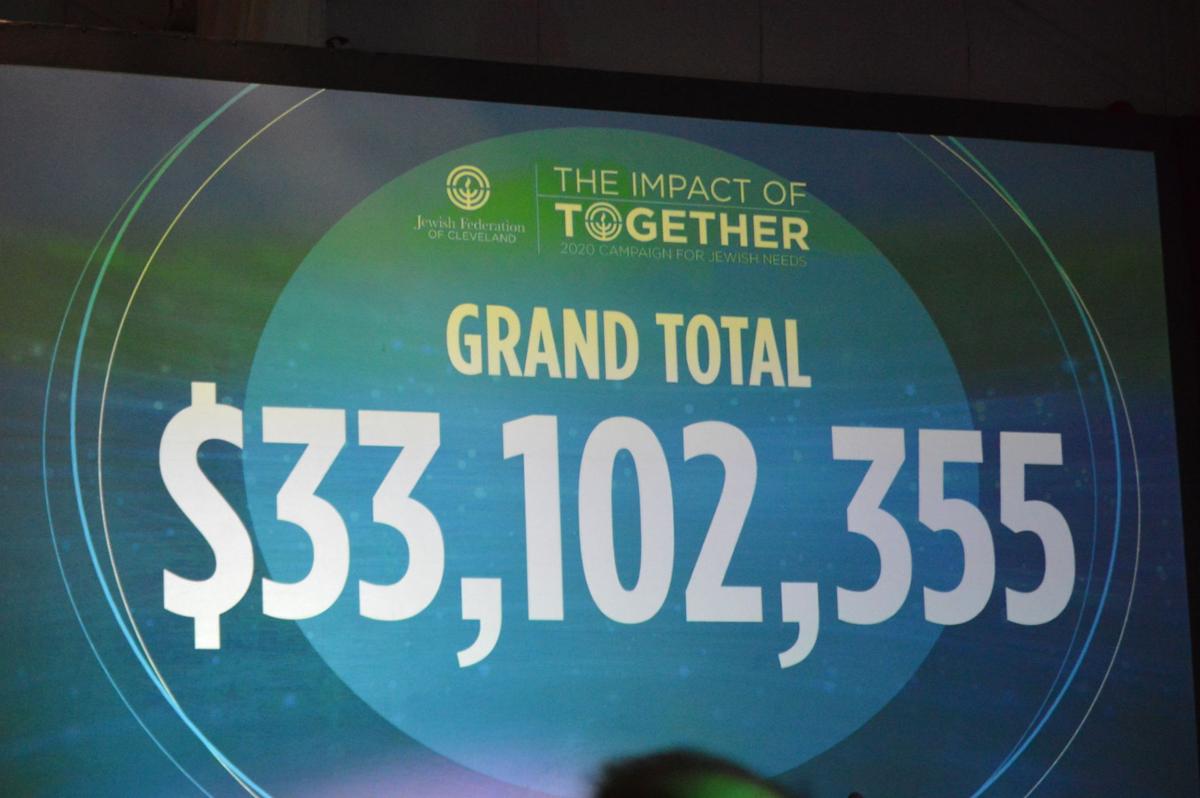 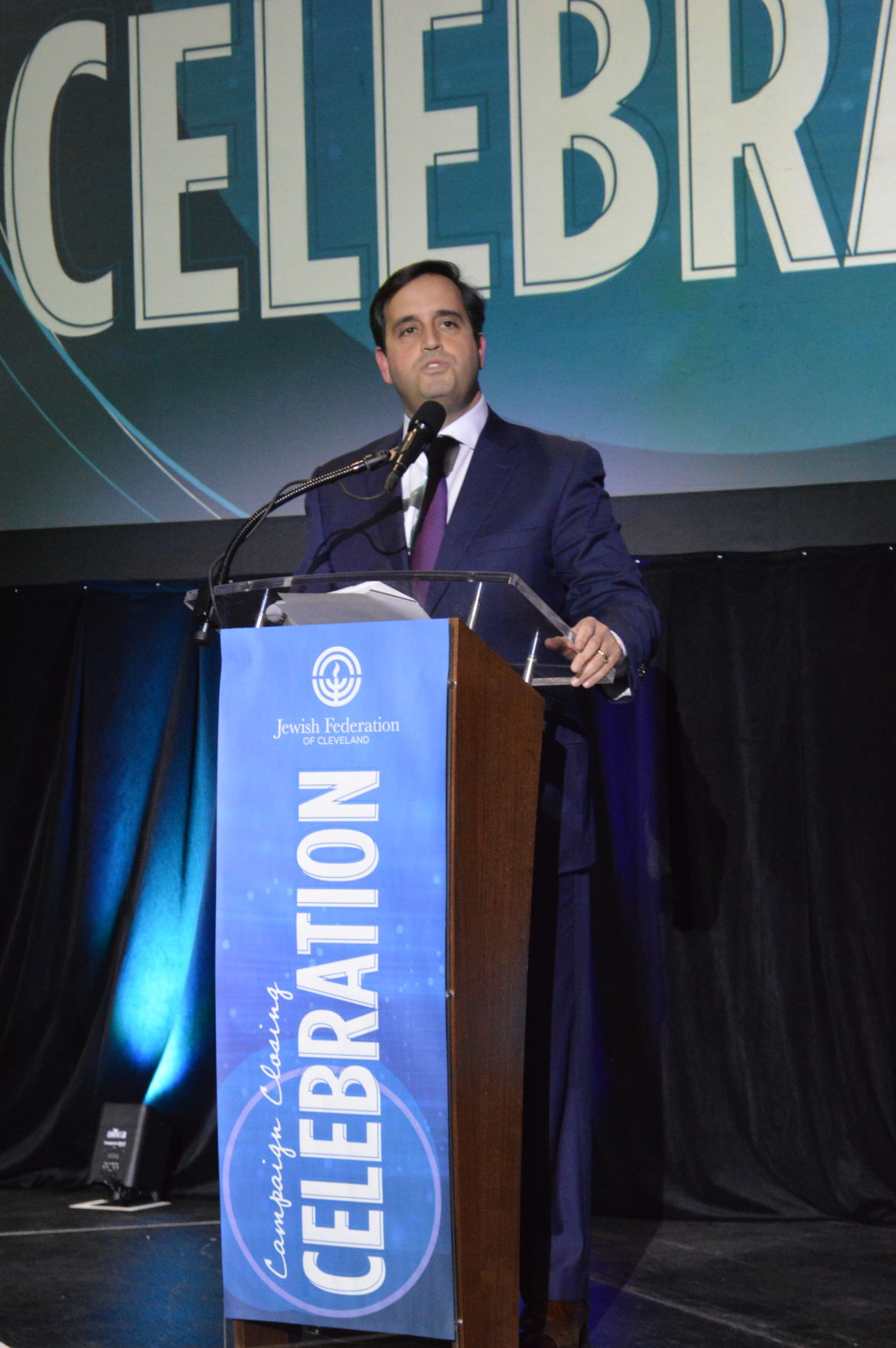 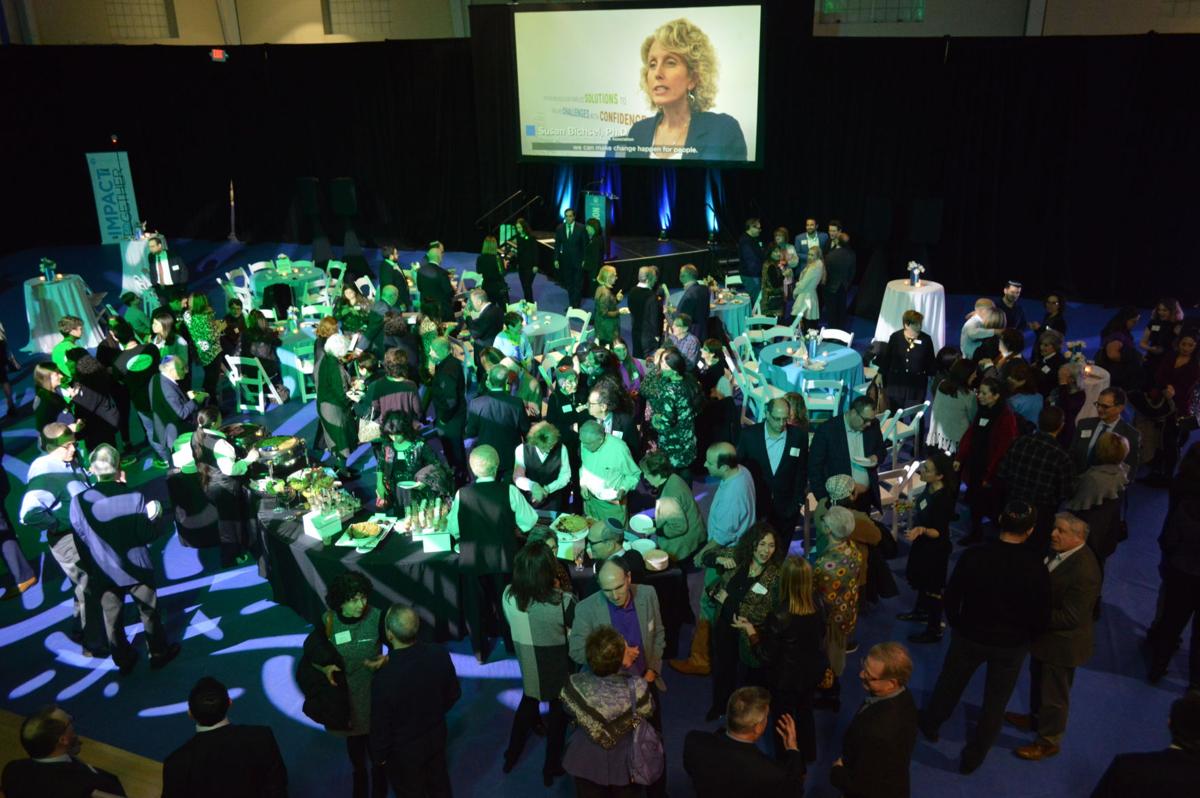 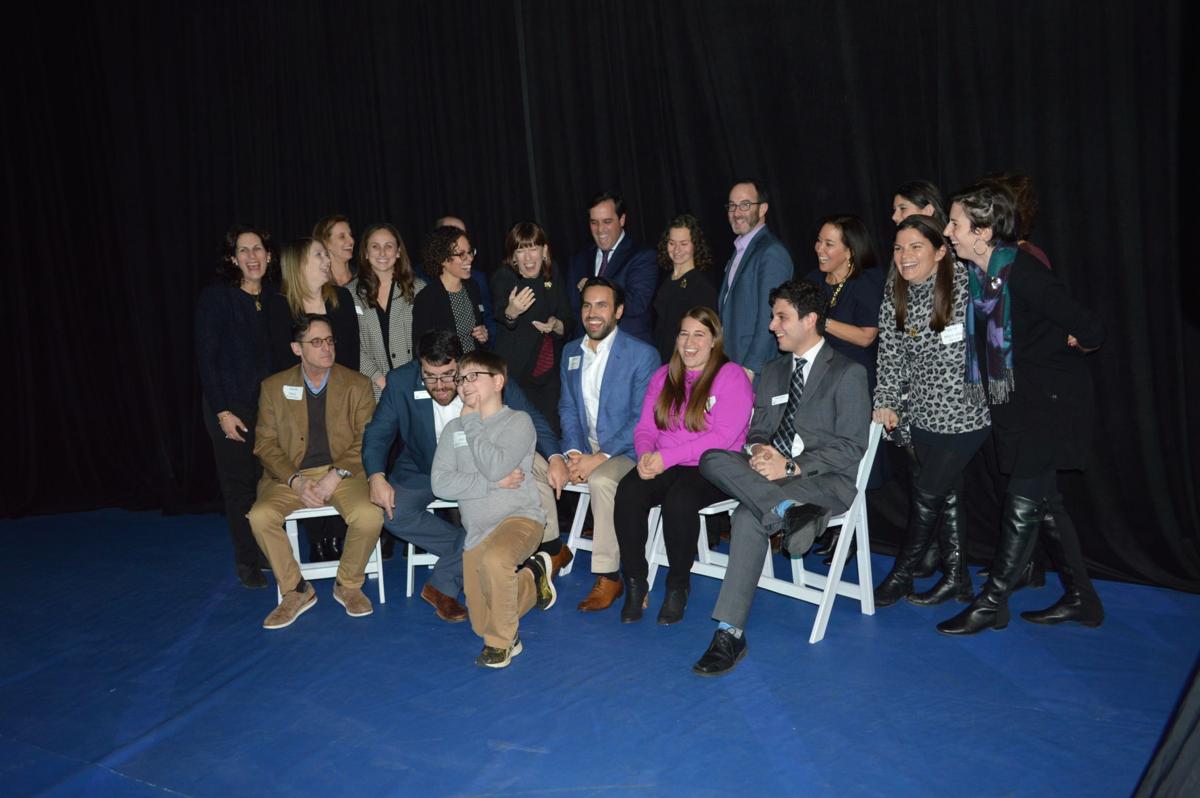 The campaign leadership team shares a light moment with a young guest. 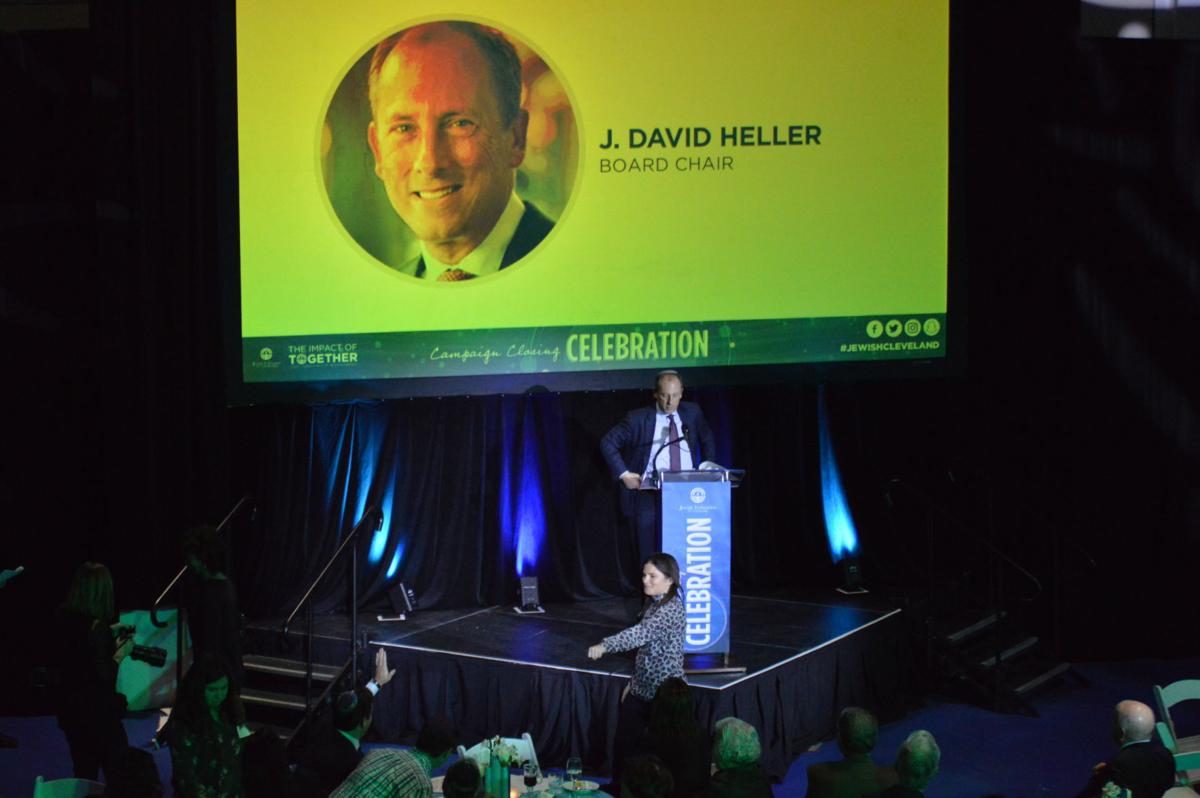 Michelle Hirsch gets set to give a high five to Jeff Wild in the audience as J. David Heller delivers remarks. 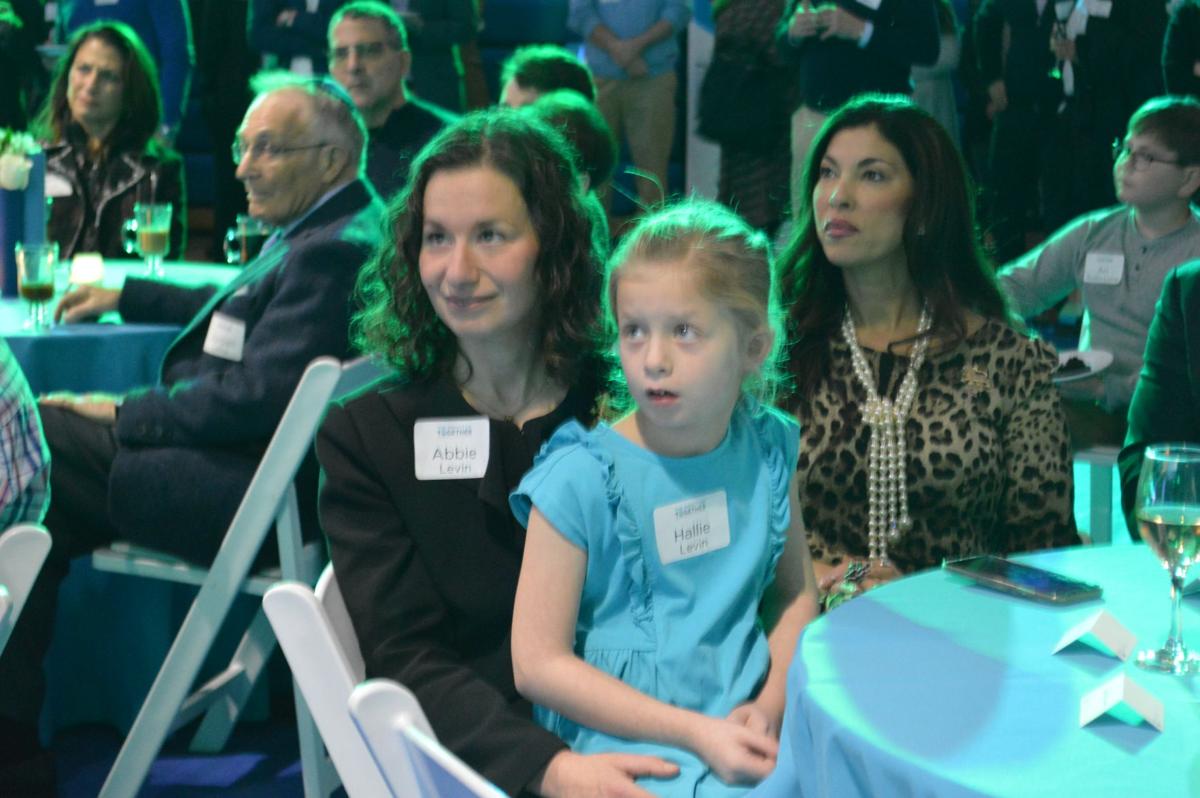 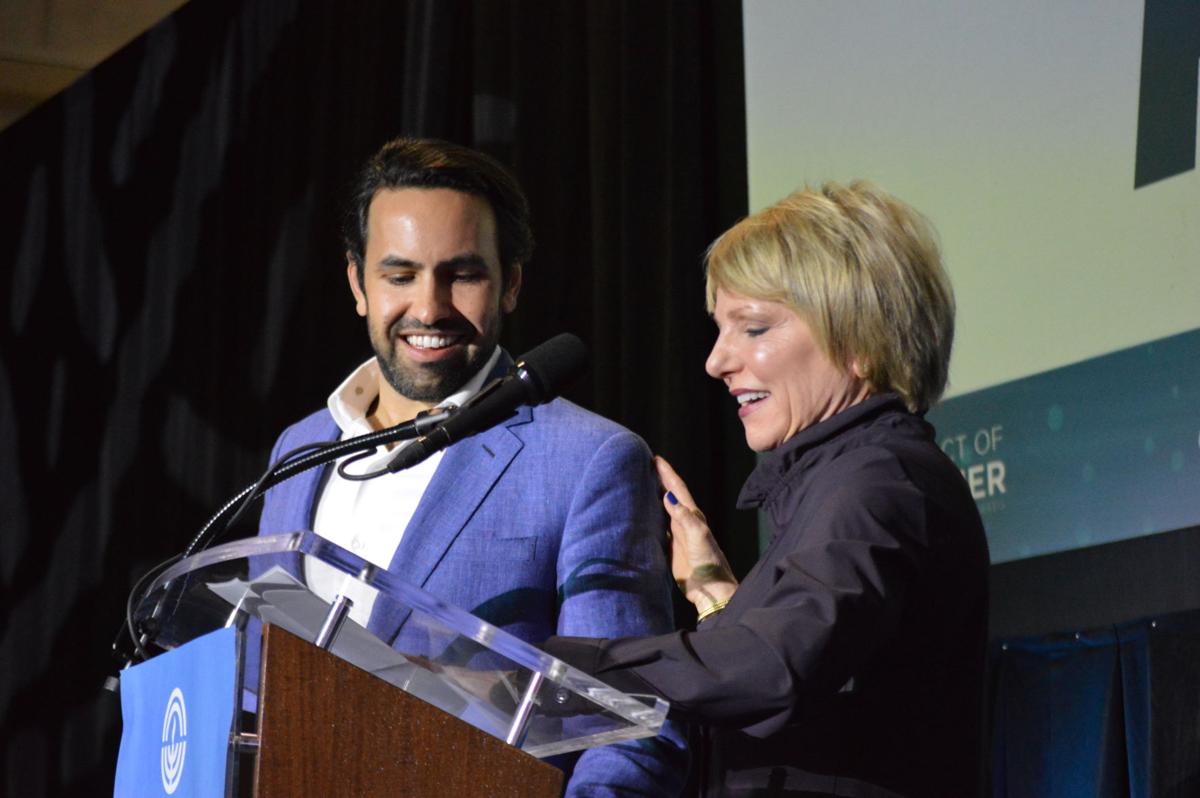 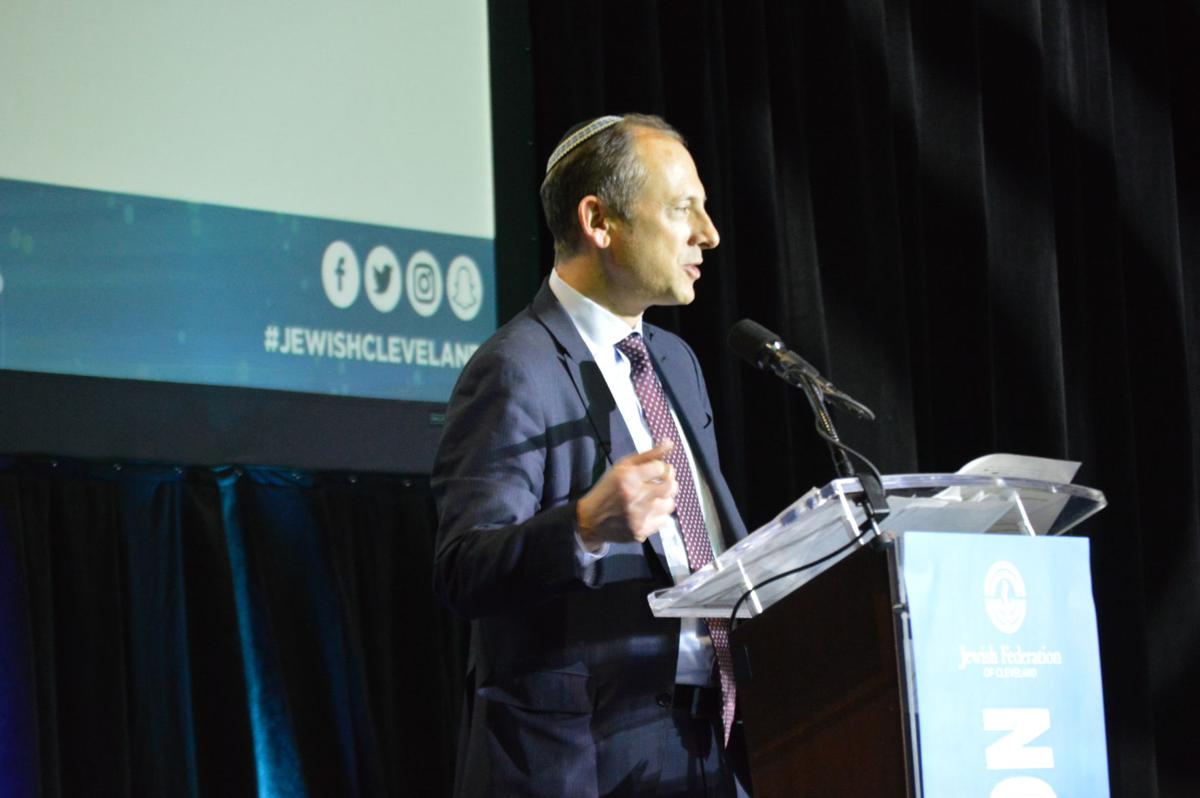 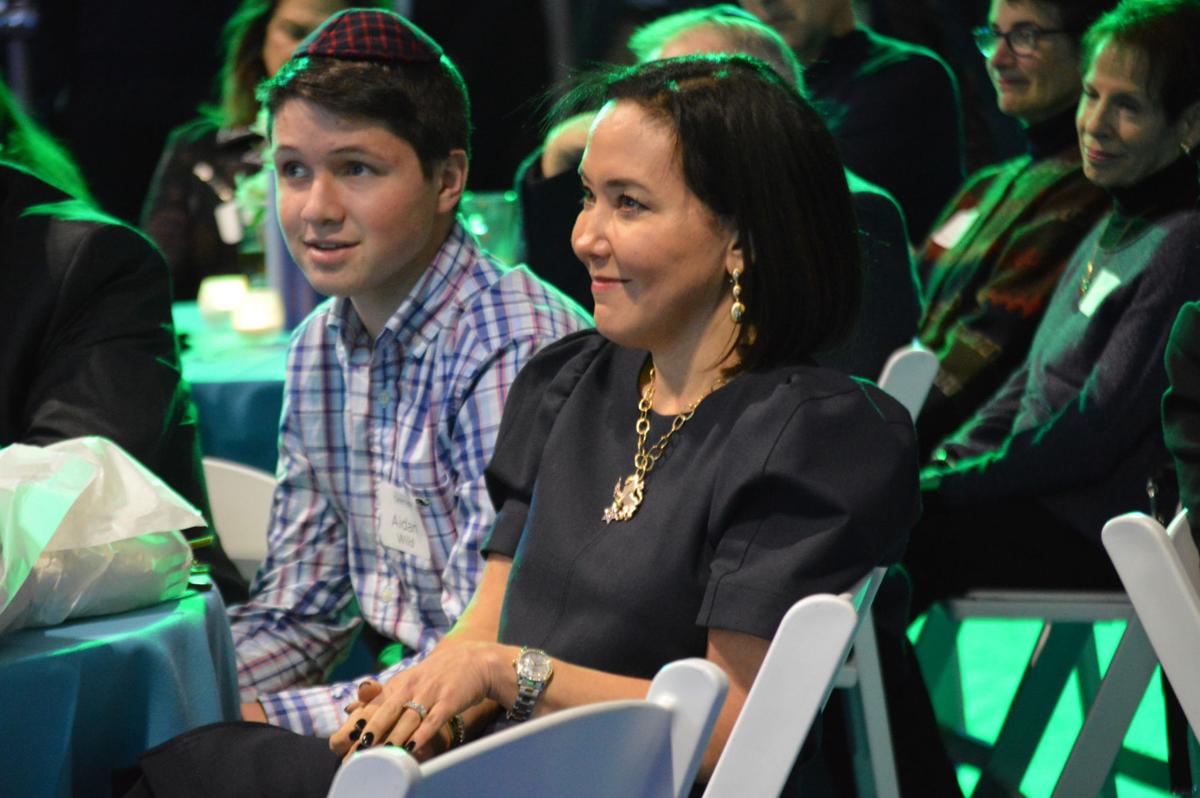 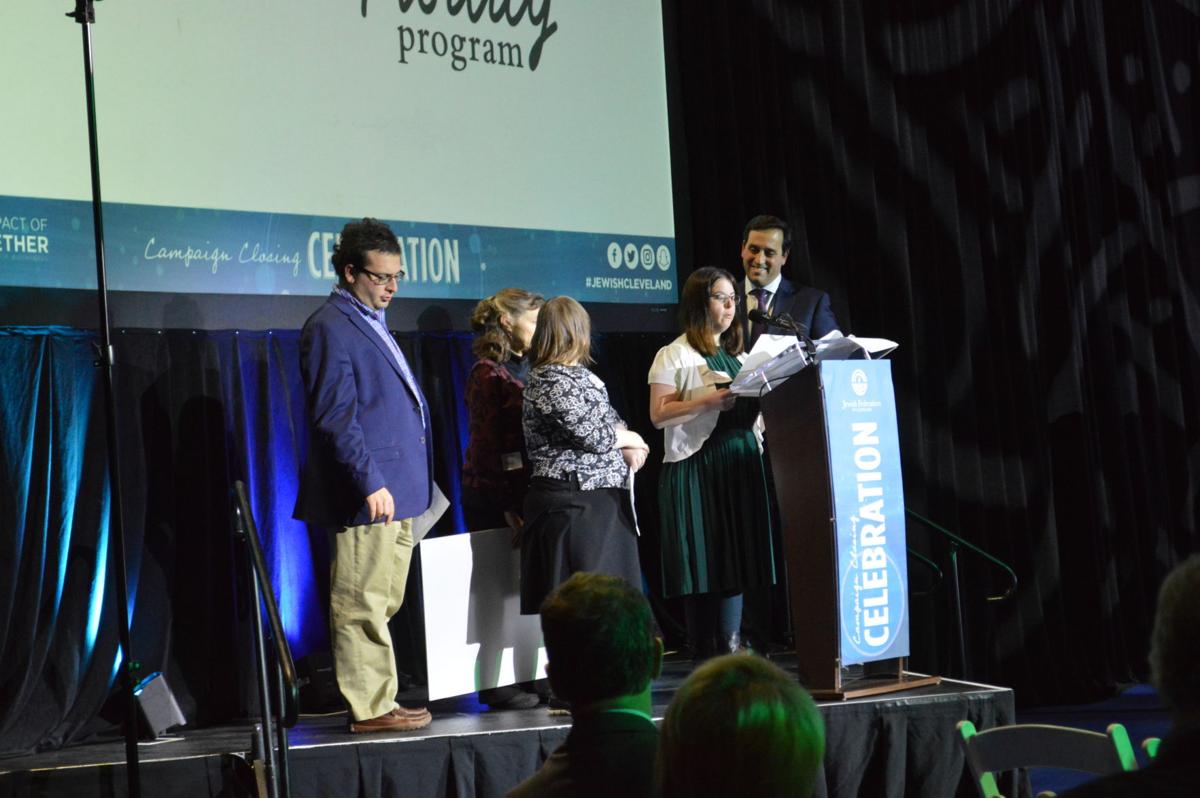 YouthAbility presented a check for $1,500, which Jeffrey J. Wild called one of the most special gifts of the evening. 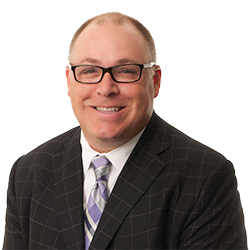 YouthAbility presented a check for $1,500, which Jeffrey J. Wild called one of the most special gifts of the evening.

The Jewish Federation of Cleveland raised a record $33,102,355 in the 2020 Campaign for Jewish Needs, it was announced Dec. 11 at the Campaign Closing Celebration at Fuchs Mizrachi School in Beachwood. The campaign serves Jewish Cleveland and the global community.

“What great numbers we've heard so far," said J. David Heller, Federation board chair as he thanked individual fundraisers as well as Benesch, the largest corporate sponsor. "It has been such a personal joy to work with Jeff (Wild) over the past two years, but as board chair over this past year, really working strategically and being Jeff's partner."

Heller praised Wild's leadership, his passion for Jewish education and for social services, "and I think if you've heard Jeff speak at all throughout this campaign, his passion for security and understanding the need to have a safe, secure Jewish community."

Brunswick Companies of Independence offered a $1,000 match to donors under the age of 45 who for the first time contribute $1,000 or more, joining the Ben Gurion Society level of giving. The Federation surpassed the Brunswick Companies BGS Challenge goal of 60 gifts. Sixty-four new Ben-Gurion Society gifts were received – all of which will be matched.

Renee Chelm, past Federation board chair, presented Adam R. Jacobs with the 2019 Ambassador Milton A. and Roslyn Z. Wolf Young Campaigner of the Year Award. The award recognizes leadership, dedication and hard work by a young leader on behalf of the Campaign for Jewish Needs.

"Much of the work of the Federation is to benefit generations to come," said Chelm, who presented the award on behalf of Nancy Wolf and her family, who were unable to attend.

"We have the privilege and the responsibility to work with emerging Jewish leaders to ensure a bright Jewish future here in Cleveland, and around the world for that matter," Chelm said. "And let me tell you, Jewish Cleveland is in remarkable hands with the leaders of our Young Leadership Division."

A video about the work of Jacobs was shown. He will receive a trip to Israel and a plaque, which recognized his work as his "demonstrated leadership, participation in campaign activities, personal generosity, and deep commitment to reflect the high ideals and devoted service exemplified by the Wolf family.

"Everyone in this room believes in the power of the collective and the impact that we all can have on the future," Jacobs said. "Living in such a strong, supportive community, it's very easy for us to overlook how good life is and how blessed we are to be living today. More than ever, it's important to recognize and separate the noise of daily life and focus on the amazing ways we are changing the world."

Jacobs spoke of the strength of Cleveland's Jewish community and contrasted it with the country of Georgia.

"Where was once a thriving Jewish population is now down to only a few thousand," Jacobs said. "Visiting with a cute elderly couple in their home, both college graduates having very successful careers, they're now living on a government pension of about $2 a day in their tiny, dated third-floor walk-up which their family has lived in for almost 100 years. Gathering in their kitchen, also their bedroom, we discussed the current challenges and all the things for which they are now grateful.

"Thanks to beneficiary organizations of the Federation, they have food in the fridge, medicine in their cabinets and also a community center to stay connected to the Jewish community. But most importantly, they have people to speak with them as human beings and make sure they're doing all right. We're not only helping poor Jews, but making sure no Jews are living poorly."

Jacobs serves on the National Young Leadership Cabinet, which has afforded him the opportunity to see the work of partner agencies of the Jewish Federations of North America.

"We should all feel so lucky to be a part of something that changes people's lives," he said.

Michelle Hirsch, co-chair of the Women’s Philanthropy division, said, “We are empowering women to connect in a powerful and personal way in their own name.”

Wild spoke about how gifted Greater Cleveland is to have many Jewish day schools.

"We lead the way in terms of other cities in the country (and) in terms of commitment to Jewish education," he said, adding that he researched Jewish day schools prior to moving to Cleveland 22 years ago.

"After 22 years, I'm even more impressed with the talented educators that are inside of our day schools. ... When we began the 2019 Campaign for Jewish Needs just two years ago, i was planning on spending a lot of time talking about the impact of Jewish education on Jewish continuity, to the growth of Jewish Cleveland and, to be honest, to ensure that we had a future.

"However, one month into my first campaign, unfortunately, the massacre at the Tree of Life Synagogue in Pittsburgh occurred. And for all of the right reasons, the campaign message needed to change. We needed to focus on what the Federation was doing to secure our community and to keep us and all of our children safe. However, as Erika (Rudin-Luria, president of the Jewish Federation of Cleveland) likes to remind us, we cannot let security define us. We need to focus on what our agencies and our partners are doing inside the very buildings that we are protecting."

Wild said he is convinced day schools will need additional funds to face the challenges of the next few years.

Wild made several thank-you's to Federation staff and leaders and to his wife, Danielle, and to his son, Aidan.

He thanked the nearly 200 people who attended the celebration and who helped raise the funds as well as contributing to the Federation.

Jewish Family Service Association's Horvitz YouthAbility volunteers presented a check in the amount of $1,500 to the Campaign for Jewish Needs that they raised through their efforts, including selling cookies.

"This is absolutely incredible," Wild said. "Out of all the numbers that I've announced tonight, this may be the most special."

Sherman, as a volunteer, will be responsible for providing leadership, vision and strategy for the Federation’s annual fundraising effort. Sherman, 51, is a principal and co-founder of Sherman Boseman Legal Group, where he focuses his practice on litigation and complex negotiations in a wide variety of labor and employment and commercial areas.

Sherman has been actively involved in Cleveland’s Jewish community for several years and serves as the strategic planning committee chair for the Federation. He is a past president of the Cleveland Hillel Foundation, and has participated in leadership opportunities such as Cleveland Bridge Builders and Leadership Cleveland.

“Bradley is uniquely qualified for this position because of his vision, enthusiasm and steadfast commitment to the Federation, as well as the leadership he brings to all of the activities in which he is involved,” Heller said in a news release.

“I am honored to serve our community in this capacity for the next two years,” Sherman said in a news release. “I have been personally impacted by the work of the Federation and have experienced firsthand the tremendous work the Federation and our beneficiary agencies do daily to help Jews in Cleveland and around the world. Working alongside Federation’s leadership team and a dedicated network of volunteers, I’m confident we will continue to make life in Jewish Cleveland better today and even stronger in the future.”