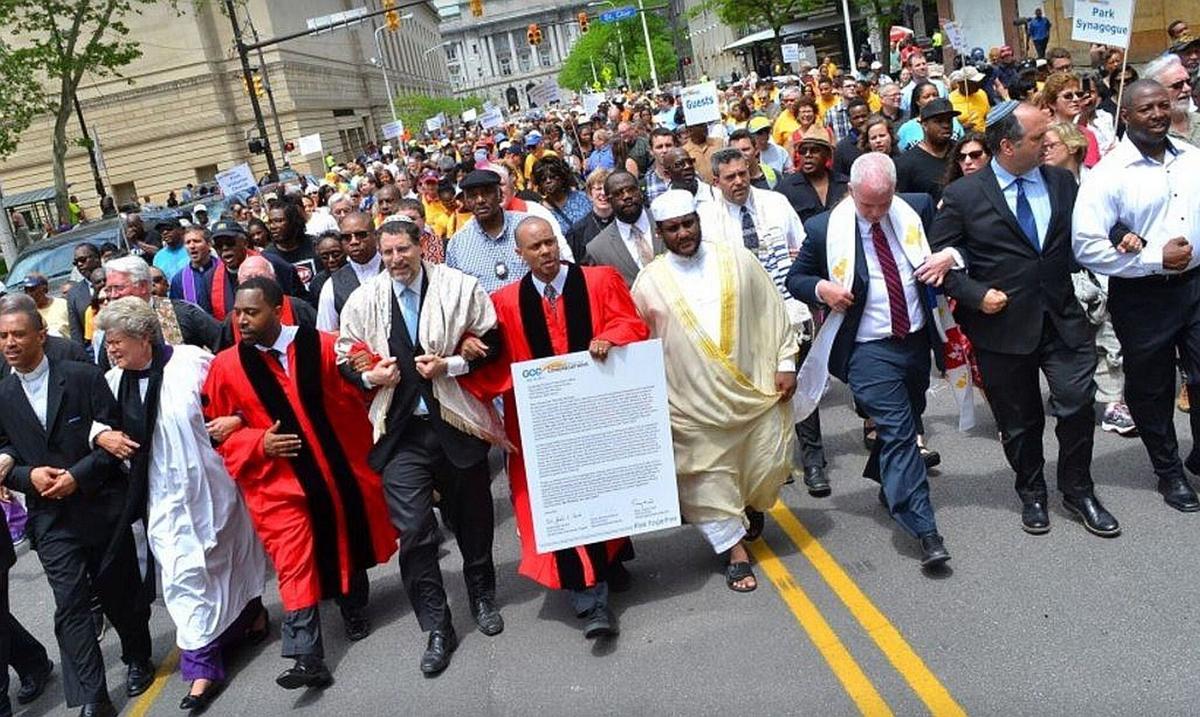 Anshe Chesed Fairmount Temple’s Rabbi Joshua Caruso, fourth from left, and Senior Rabbi Robert Nosanchuk, second from right, join other Cleveland clergy in a march that took place in the wake of deaths of unarmed people of color by officers of the Cleveland Police Division in May 2015. The effort intended to pressure the city of Cleveland to assent to the consent decree with the U.S. Department of Justice, mandating that Cleveland make specific, compressive reforms to its police department. 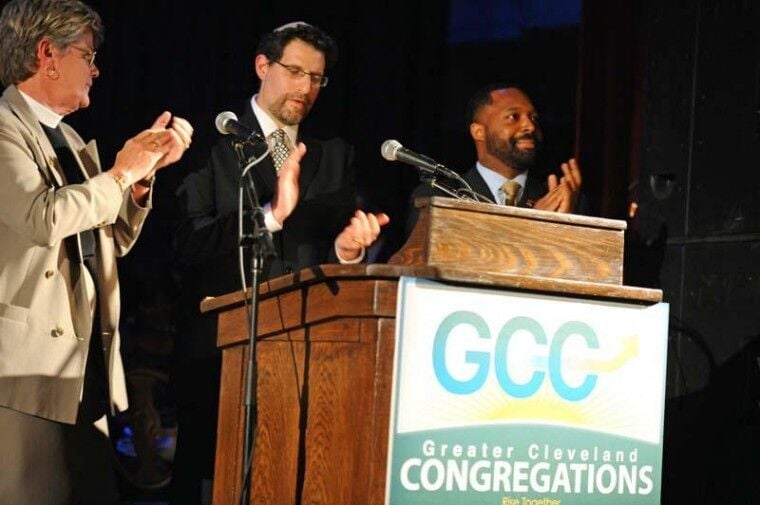 Ten years ago, Rabbi Joshua Caruso wondered why there was an unspoken separation among Greater Cleveland’s places of worship and religious-based organizations.

Those synagogues, temples, churches, mosques and organizations espoused different beliefs, but besides that, Caruso saw a world of similarities – especially when it came to community service. Congregations performed general mitzvah work to help people in need, and they focused on individual pieces of advocacy important to their members.

That gave Caruso, a rabbi at Anshe Chesed Fairmount Temple in Beachwood, an idea: What would it look like if congregations and religious organizations came together and worked toward common advocacy goals?

“We can preach about justice, equity, love and peace within our walls all we want, but what does it really mean if we don’t take those lessons we teach and learn inside our houses of worship to impact the world around us?” asked Caruso. “We have a responsibility towards the greater community – both the Jewish community and the greater universal community.”

He reached out to the Very Rev. Tracey Lind, former dean of Trinity Episcopal Cathedral, and the Rev. Jawanza Karriem Colvin, pastor of Olivet Institutional Baptist Church, both located in Cleveland, with his idea.

And on June 6, 2011, Greater Cleveland Congregations was born with its first event at the Masonic Auditorium in Cleveland, with more than 2,000 people, including 250 from Fairmount Temple, and 40 congregations and organizations attending. Among community leaders present were Cleveland Mayor Frank G. Jackson, then-Cuyahoga County Executive Ed FitzGerald and then-Ohio House Minority Leader Armond Budish, who is now the Cuyahoga County Executive.

This year, GCC commemorates a decade of advocacy, community organizing and bonds between members of all faiths.

“I think 10 years inspires me and GCC’s leaders to take a step back, even with all the work that we’re doing, to celebrate the fact that an organization that started with just simple person-to-person connections has built itself into an organization that is respected in our community,” Caruso said.

The organization discovers overarching communal issues through one-to-one meetings and house meetings between GCC leaders and members called “public expressions of private pain,” Caruso said. The issues discussed and pursued impact people in one or all of the religious communities and can range from economic hardships to systemic racism.

“The relationships that we built with each other has been the glue that keeps us together, even before the founding of Greater Cleveland Congregations,” Caruso said. “It can be very powerful when people of different faith traditions, who don’t necessarily look like each other, pray like one another or live in the same neighborhoods, can come together and share the public expression of private pain.”

GCC also has public meetings called “actions,” where it invites county officials to listen to community members’ problems. With the meetings attended by thousands, GCC hopes officials agree to work with the organization to find solutions, thus serving as a much needed checks and balances system for public officials, Caruso said.

“For us, it was really important to be a civic player in this arena to basically say, ‘There’s a citizen’s voice here, and that voice can be heard beyond our synagogues and churches,’” he said.

At the heart of GCC is its many accomplishments.

In its earlier years, GCC’s efforts contributed to the formation of the Northeast Ohio Medicaid Expansion Coalition in 2013 and Ohio’s 2014 Medicaid expansion that now provides more than 700,000 Ohioans with health care access; the establishment of a civil rights unit in the Cuyahoga County Prosecutor’s Office; and the finalized 2015 Cleveland Police Consent Decree between the city of Cleveland and the U.S. Department of Justice regarding the Cleveland Division of Police’s excessive uses of force.

In 2020, GCC saw numerous achievements through its advocacy work. One result is the county will open its first crisis diversion center on April 1 after four years of GCC pushing for such a center, where people with mental illness and substance abuse struggles can be moved from the criminal justice system and into a mental health treatment system.

Also last year, GCC recruited 17 African American congregations to provide free onsite COVID-19 testing through partnerships with the Cuyahoga County Board of Health and MetroHealth System. A part of its Color of Health campaign, those sites tested more than 3,000 people, and more will be tested at three locations starting this month. The organization also pressured national pharmacies for additional testing opportunities, resulting in eight new pharmacy testing sites in Cleveland.

Leading up to the 2020 presidential election, GCC trained hundreds of volunteers to make 13,000 telephone calls, send emails and provide door hangers to some of the thousands of residents whose ballot applications had been unknowingly rejected. Through GCC’s Battle for Democracy initiative, 7,000 applications were corrected.

Despite its many achievements, the organization has also experienced challenges.

Caruso said there are always going to be struggles when entering an area of controversy, addressing a problem a party refuses to acknowledge or pressing against the competing needs of communities.

“The work of community organizing really doesn’t succeed unless there’s a measure of healthy tension,” Caruso said. “In many respects, that tension exposes what the competing needs in the civic arena are. ... Not everybody welcomes that sort of challenge, our presence in the community, because we can ask questions that will, at times, challenge the status quo.”

In 2017, The Temple-Tifereth Israel in Beachwood and Park Synagogue in Cleveland Heights and Pepper Pike disassociated with GCC following the interfaith advocacy group opposing the proposal to upgrade Rocket Mortgage FieldHouse, then-Quicken Loans Arena, in downtown Cleveland. GCC had been advocating for including in the sports arena renovation deal a community benefits agreement to help residents in need, as previously reported by the CJN. The organization withdrew its petitions against the renovation in September 2017, after working out an agreement with Cuyahoga County that would involve the building of a crisis diversion center.

Former senior rabbi of TTTI, Rabbi Richard Block, and senior rabbi of Park Synagogue, Rabbi Joshua Skoff, explained their departure at the time was due to “divisive tactics” used by GCC that put members in positions that created alienation between churches, temples and mosques that were not members of GCC, as previously reported by the CJN.

Looking past its hiccups and struggles, Caruso sees a full list of efforts GCC will tackle for years to come.

At 2 p.m. Feb. 28, GCC will host a town hall meeting called, “African-Americans & the COVID-19 Vaccine: Confronting a Troubled History; Equipping our Community with the Facts.”

GCC will continue its Color of Health campaign to provide testing and vaccines to people of color and lower income residents. Its Battle for Democracy initiative will also progress, where GCC will engage and recruit Ohioans in the importance of the right to vote. GCC will further its efforts fighting inequity in the Cleveland Metropolitan School District and follow the implementation of the crisis diversion center. The organization is also starting a cooperative purchasing agreement between congregations to lower costs of services.

Caruso explained that GCC leaders are in the middle of a three-session virtual retreat that has been attended by as many as 78 of the organization’s leaders. In the final session, the organization was to establish a team to shape GCC’s 10-year anniversary. Celebration plans will be shared once the leaders weigh in.

“It’s exciting,” Caruso said. “We have a new decade to look forward to.”