At least three advocacy organizations are calling for the revocation of the medical training certificate of a former Cleveland Clinic resident who was fired after anti-Semitic posts were discovered on her social media accounts.

Dr. Lara Kollab apologized Jan. 4 for her tweets, including one in which she would “purposely give all the yahood the wrong meds (sic).” Yahood refers to the Arabic word for Jews, according to Canary Mission, the anonymous online watchdog group that recently publicized Kollab’s tweets spanning from June 2011 to August 2017.

Kollab’s apology was met with criticism by online commenters, and two national organizations jointly filed a complaint with the State Medical Board of Ohio.

Proclaiming Justice to the Nations, a Christian group based in Franklin, Tenn., that supports Jews and the state of Israel, on Jan. 14 filed the latest complaint with the medical board regarding Kollab.

“In her body of tweets she has revealed an unbridled animus toward Jews, and also toward anyone who, in her opinion, supports the State of Israel,” Beachwood lawyer Michael S. Goldstein wrote in his eight-page memorandum of law in support of his complaint to the medical board. He is general counsel and Ohio director of the group.

“She can say anything she likes," Goldstein wrote. "But where her tweets denote her intent to utilize her medical practice to harm some of her patients, the language itself constitutes unethical conduct under the AOA code of ethics, and thereby violates the Board’s enabling statute. The Board must not permit a license or certificate to practice osteopathic medicine to be a weapon used by a physician to harm patients.”

The chair of the American Medical Association board of trustees decried Kollab’s posts.

“Discrimination in any form – particularly in providing care – is abhorrent,” Dr. Jack Resneck Jr. said in an email Jan. 9 to the Cleveland Jewish News. “Conduct of the sort described is unacceptable, undermines patients’ confidence in physicians, and falls outside the expectations the American Medical Association holds for how physicians will comport themselves as members of the medical profession. As Principle I of the AMA Code of Medical Ethics holds, ‘A physician shall be dedicated to providing competent medical care, with compassion and respect for human dignity and rights’ and shall, while caring for a patient ‘regard responsibility to the patient as paramount.’” 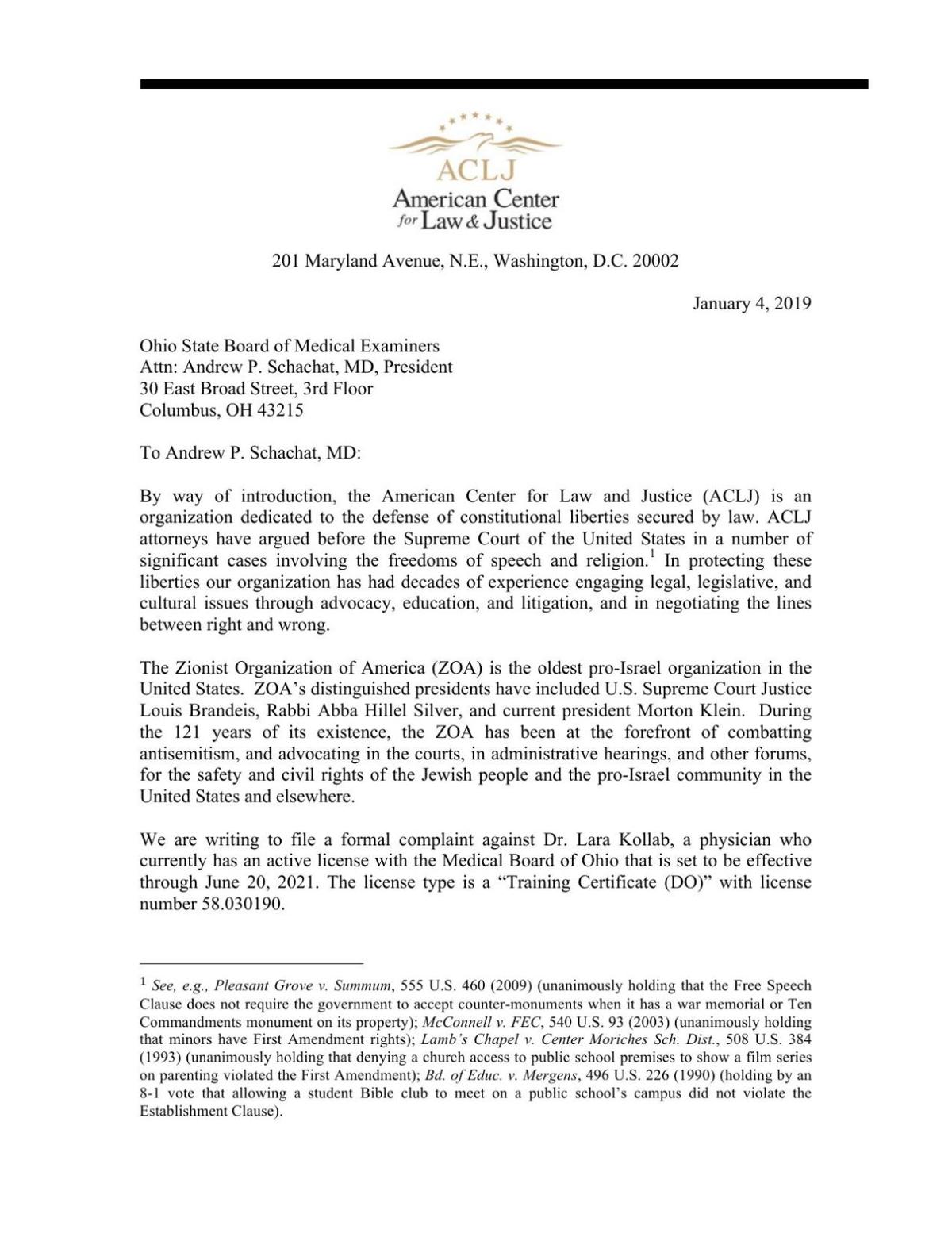 Her lawyer, Ziad Tayeh of Cleveland, told the CJN, “Dr. Kollab made a mistake by posting offensive tweets years before she entered medical school, for which she has apologized.

“She did not harm or intend to cause harm to any patient, nor is she accused of engaging in any nefarious conduct pertaining to her treatment of patients,” Tayeh wrote. “The medical board should not punish Dr. Kollab for social media posts made years prior to her licensure, as they have no bearing on her fitness to practice medicine today.”

The American Center for Law and Justice and the Zionist Organization of America filed a complaint addressed to Dr. Andrew P. Schachat, president of the State Medical Board of Ohio, who is vice chairman for clinical affairs at Cleveland Clinic Cole Eye Institute in Cleveland and director of clinical research. Schachat is a Shaker Heights resident.

The six-page complaint written on American Center for Law and Justice stationery and signed by both Jay Sekulow, chief counsel for that group, and Mark Levenson, chair of the Zionist Organization of America –  calls for a revocation of Kollab’s licensure.

Kollab has a training certificate, which is now invalid, that was tied directly to her work at Cleveland Clinic, according to Tessie Pollock, communications director for the State Medical Board of Ohio.

While the complaint acknowledges this, it also calls for the state board to take action.

“While it is true that Dr. Kollab’s temporary license limits her to practicing medicine at the Clinic and is therefore practically useless for the moment, the purpose of this letter is to officially ask the Board to revoke her medical license permanently, so that no other clinic or medical practice in Ohio might inadvertently hire her, and no other patients will be put at risk,” the letter stated.

Kollab and her lawyer both responded to the complaint on Jan. 8 in a single email from her lawyer.

“The tweets I posted years ago do not reflect who I am as a doctor or person,” Kollab stated. “The undeniably stupid and insensitive remarks were made years before I was admitted into medical school. I believe that the medical board will recognize the fact that I had no patient complaints during my time at the Cleveland Clinic, and treated all patients with respect and dignity, regardless of their race, religion, or ethnic background.”

Kollab started her residency in July 2018 and was fired in September. She graduated from Touro College of Osteopathic Medicine, which has campuses in New York City and Middletown, N.Y.

An online petition calling for the revocation of Kollab’s medical license by the American Center for Law and Justice garnered more than 67,000 signatures as of Jan. 8.

“These posts were made years before I was accepted into medical school, when I was a naïve, and impressionable girl barely out of high school,” Kollab wrote in her Jan. 4 apology. “I matured into a young adult during the years I attended college and medical school, and adopted strong values of inclusion, tolerance, and humanity. I take my profession and the Hippocratic Oath seriously and would never intentionally cause harm to any patient seeking medical care. As a physician, I will always strive to give the best medical treatment to all people, regardless of their race, religion, ethnicity, or culture.

“I have learned from this experience and am sorry for the pain I have caused. I pray that the Jewish community will understand and forgive me. I hope to make amends so that we can move forward and work together towards a better future for us all.”

In the apology, Kollab said she visited “my ancestral homeland” of Israel and the Palestinian territories each summer during her adolescent years.

“I became incensed at the suffering of the Palestinians under the Israeli occupation,” she wrote. “The injustice and brutality of the occupation continues to concern me, and I believe every champion of human rights owes it to humanity to work towards a just and peaceful resolution of this crisis.”

Former Cleveland Clinic resident’s ‘apology was all hers,’ attorney says

A former Cleveland Clinic resident’s apology for anti-Semitic remarks in Twitter was initiated and written by her, her lawyer said Jan. 7.