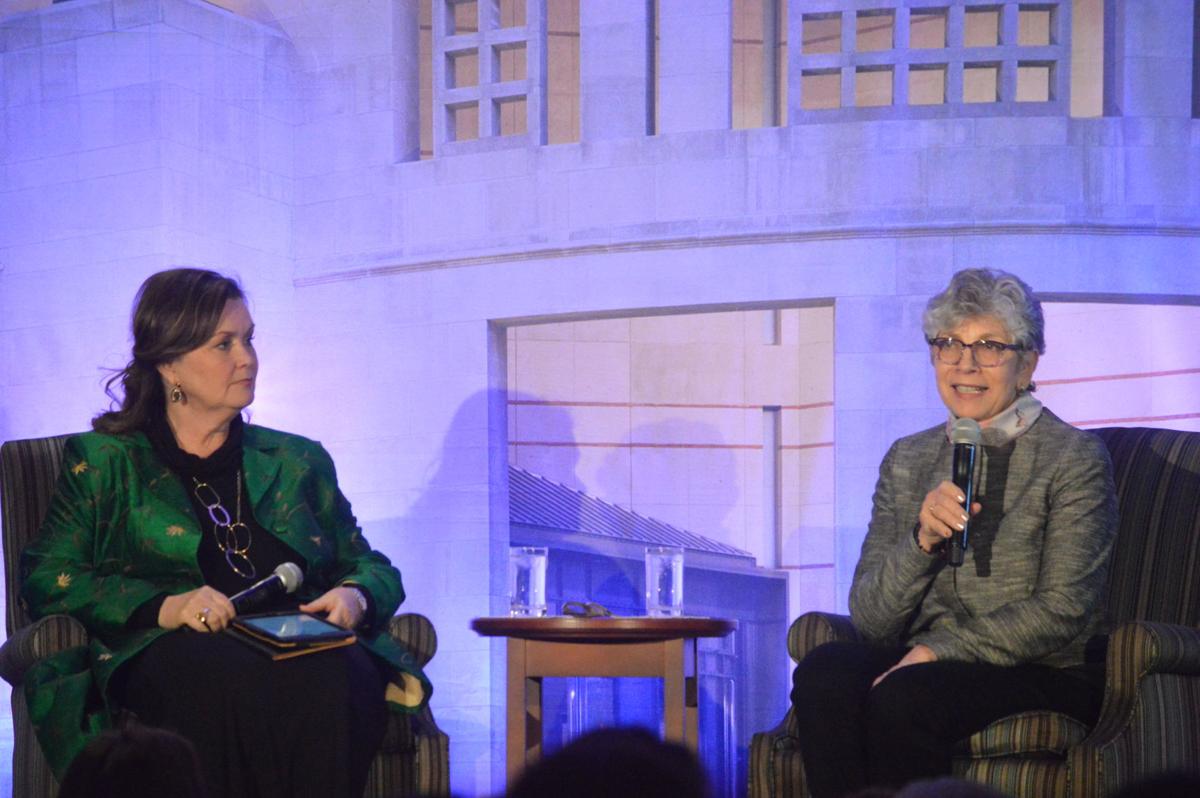 Wendy Holden, left, watches on as Hana Berger Moran shares the story of how she and her mother, Priska, survived the Holocaust. 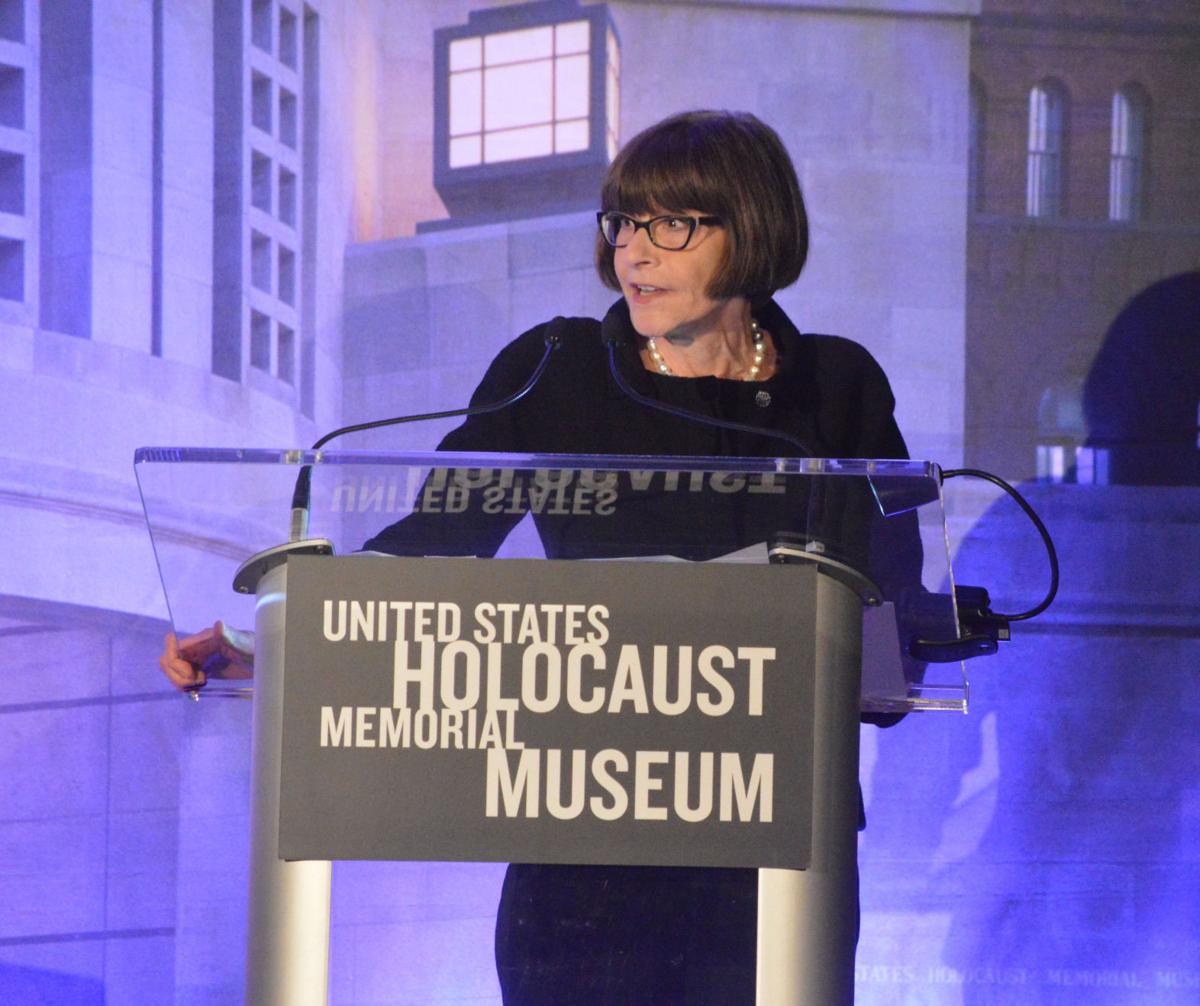 Sara J. Bloomfield, director of the U.S. Holocaust Memorial Museum in Washington, D.C., welcomes guests to the annual “What You Do Matters” luncheon. 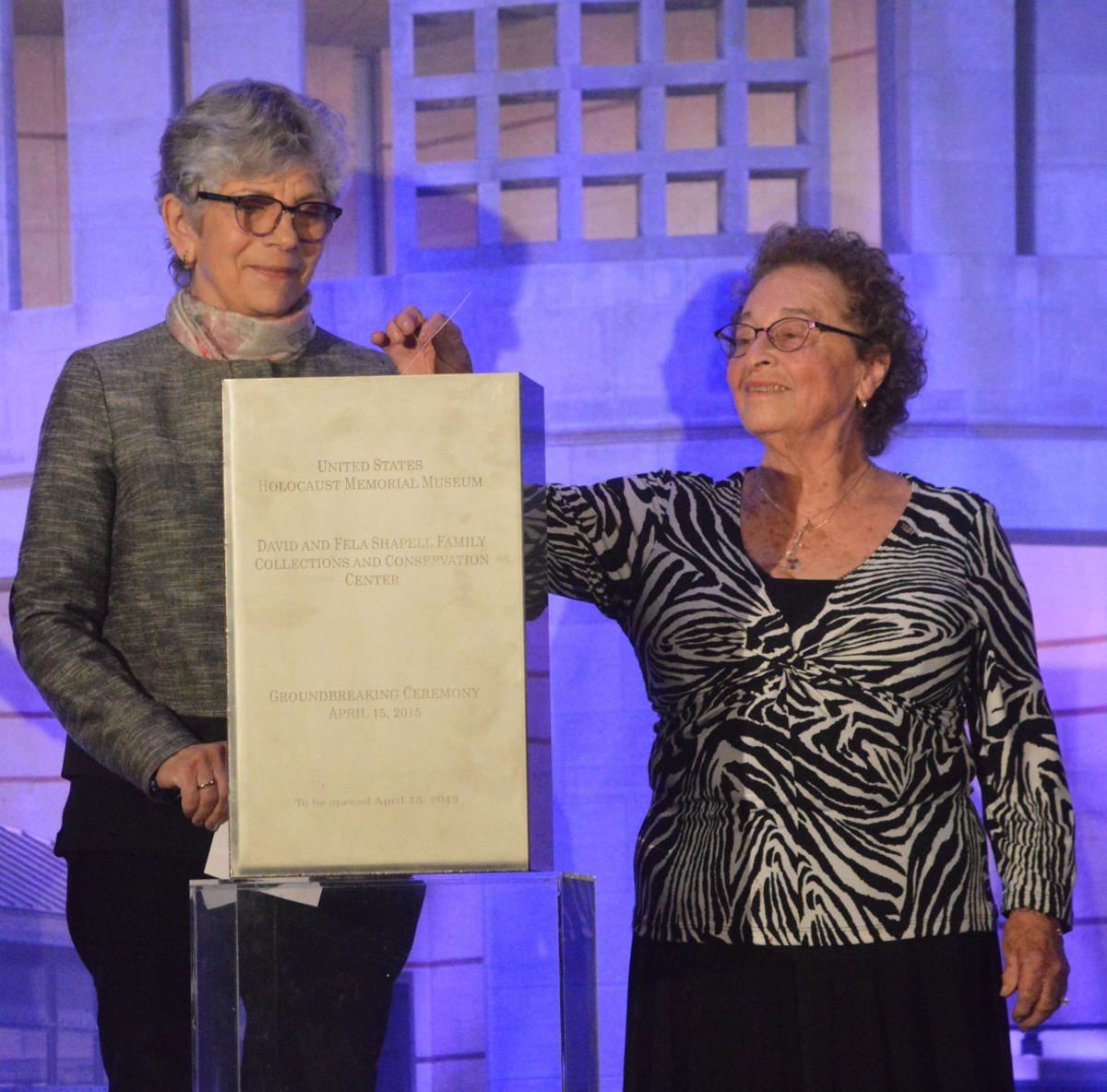 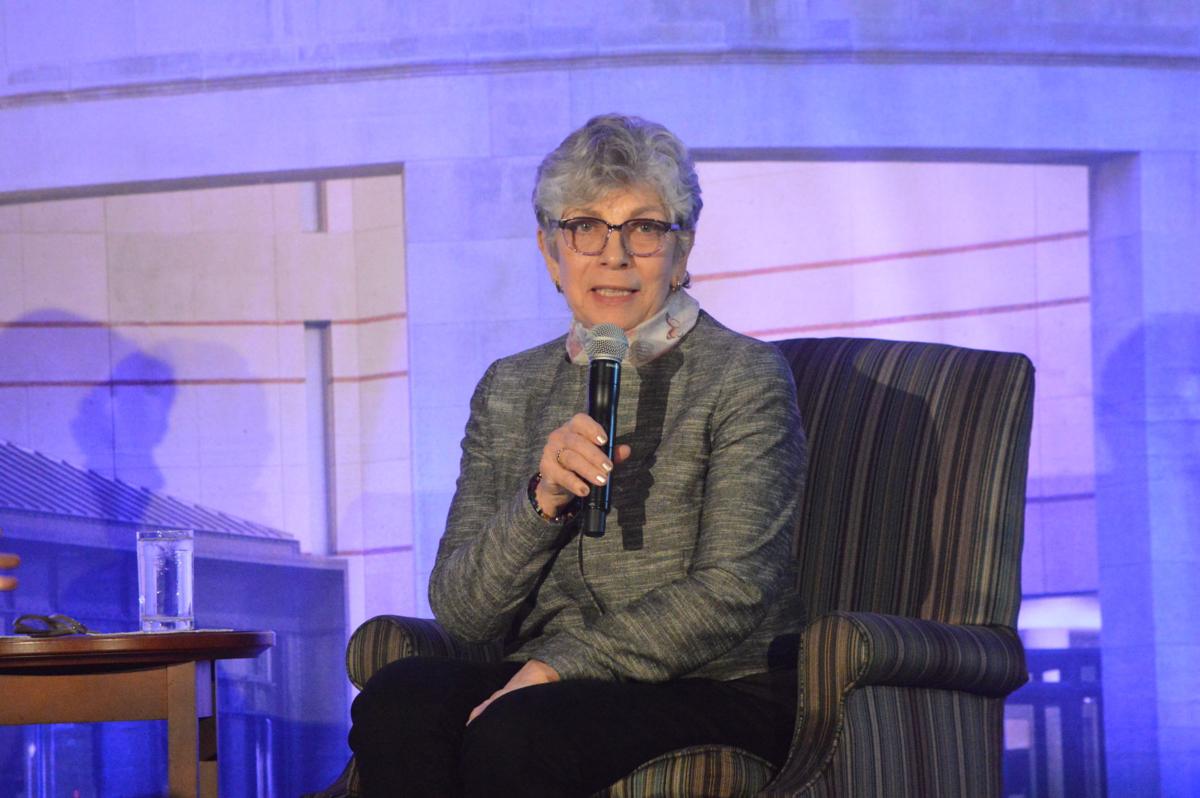 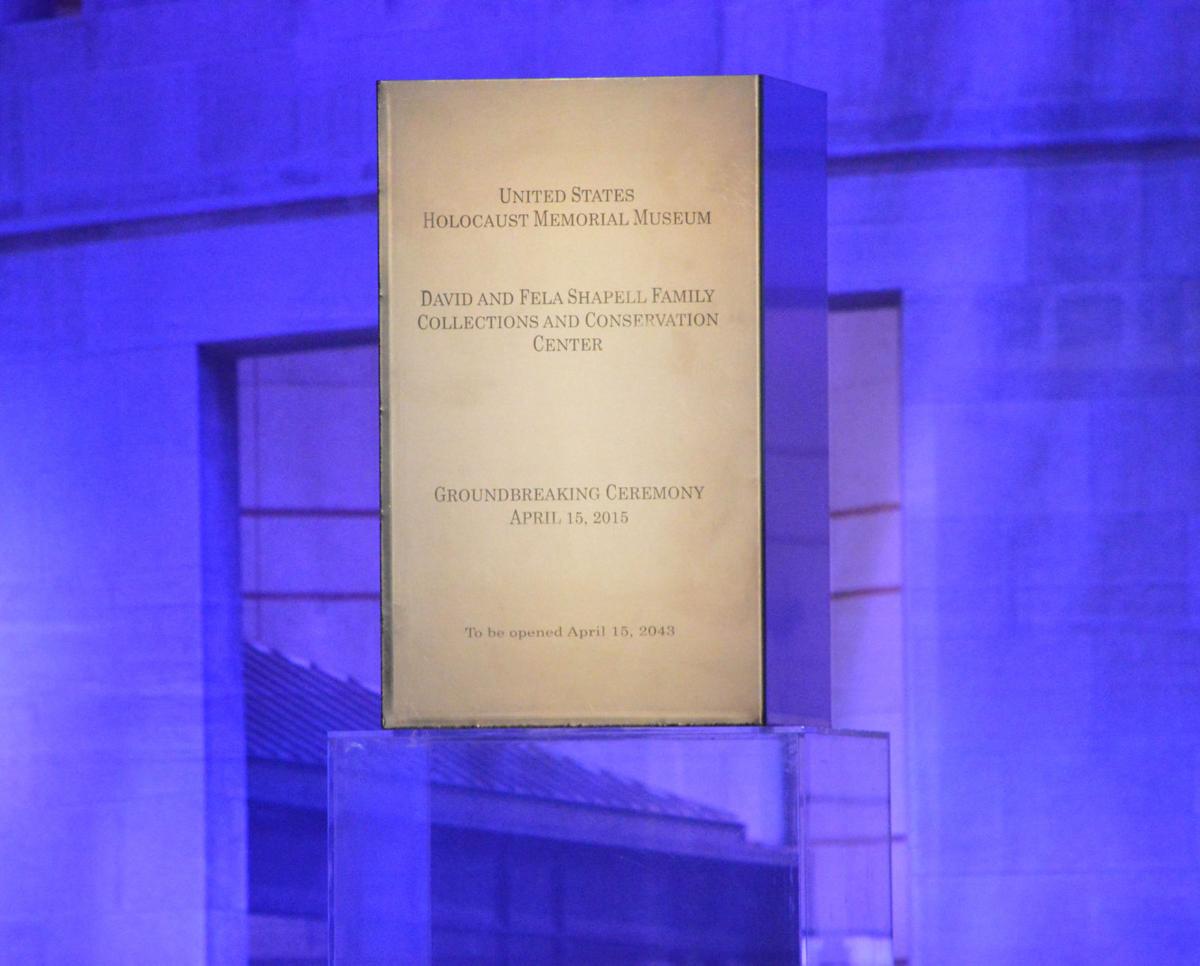 A time capsule, set to be opened in 2043, contains messages from area Holocaust survivors who have donated collections and artifacts to the U.S. Holocaust Memorial Museum in Washington D.C.

Wendy Holden, left, watches on as Hana Berger Moran shares the story of how she and her mother, Priska, survived the Holocaust.

Sara J. Bloomfield, director of the U.S. Holocaust Memorial Museum in Washington, D.C., welcomes guests to the annual “What You Do Matters” luncheon.

A time capsule, set to be opened in 2043, contains messages from area Holocaust survivors who have donated collections and artifacts to the U.S. Holocaust Memorial Museum in Washington D.C.

Technology plays an important role in society, but it also poses a danger with its ability to disseminate hateful messages and propaganda to people all over the world, according to Sara J. Bloomfield, director of the U.S. Holocaust Memorial Museum in Washington D.C.

“Hitler once said, ‘Propaganda is truly a terrible weapon in the hands of an expert,’ and the unprecedented challenge that we now face, and that our grandchildren and their children will face, is that with the internet, anyone’s an expert,” said Bloomfield, formerly of Shaker Heights, during the museum’s annual “What You Do Matters” luncheon May 19. About 425 people attended the event at Executive Caterers at Landerhaven in Mayfield Heights.

The event featured Wendy Holden, author of “Born Survivors: Three Young Mothers and Their Extraordinary Story of Courage, Defiance and Hope,” and Hana Berger Moran, a child Holocaust survivor and the daughter of one of the mothers written about in Holden’s book.

The book tells the story of how three young mothers survived through various concentration and labor camps and the harrowing way they gave birth and kept their newborn babies safe from the Nazis.

Holden said she developed the idea for the book after stumbling across an obituary a few years ago of a woman who had survived Auschwitz when she was a baby.

“It occurred to me that I had never before read anything about babies who had survived the Holocaust, and I thought that’s probably because there weren’t any,” Holden said.

Her further research led her to a woman named Eva Clarke, who lived in Cambridge, England, about an hour away from Holden’s home. She traveled there and spent a day with Clarke to learn more about her mother, Anka.

“At the end of the day I asked her if she would do me the great honor of allowing me to write her mother’s story. She reached out and touched my arm and told me, ‘I’ve been waiting for you for almost 70 years.’”

The mothers, who were from Czechoslovakia and Poland, had been sent to ghettos and various camps from 1939 to 1944. Each was two months pregnant.

Moran shared some background on her parents, Priska and Tibor, who grew up in what is now the Slovak Republic. Her mother, who was a teacher, and her father, who worked as a journalist, met at a wedding in January 1941. They married on June 21, 1941. On Sept. 28, 1944, two days after Tibor's 30th birthday, they were deported to a concentration camp in Slovakia. From there, they were sent to Auschwitz.

Priska and Tibor were immediately separated when they arrived at the camp. Josef Mengele, the notorious SS officer and physician, asked Priska if she was pregnant, to which she responded “no.”

“She never knew why she said no, but she just felt that was the right answer,” Moran said.

Priska was eventually sent to a labor camp in Freiberg, Germany. She was given a large, flimsy dress to wear, which helped conceal her pregnancy. Moran was born inside a factory at that camp, surrounded by guards and prisoners.

“Two days after I was born, they were advised that they should get ready for transport to a place which was to be their last place where they are alive,” Moran said.

Holden explained that the women were originally to be sent to the Buchenwald concentration camp in Germany to be gassed, but the camp was liberated before the train arrived.

The train trip, which was supposed to take two days, ended up being a 17-day journey. Rachel gave birth to Mark on the train, while Anka went into labor at the sight of the concentration camp. She gave birth to Clarke at the entrance of the camp’s gates.

The train eventually arrived in Mauthausen-Gusen, where the women and their babies were sent in either to be starved to death or to head to the gas chambers.

“But some wonderful things happened and again luck played a part,” Holden said. “They arrived on April 29, 1945. The gas in Mauthausen-Gusen ran out April 28. Hitler killed himself on April 30.

The women were placed in the barracks as most of the Nazis fled. On May 5, the 11th Armored Division of the U.S. Army arrived and rescued more than 80,000 concentration camp survivors.

Holden said the mothers were desperate to return to their old lives, but that was an impossible task, as each of their husbands had been murdered by the Nazis.

After the war, Anka took Clarke to England. She remarried and the three of them made a new life there. Rachel returned to Poland, but the Poles treated her so badly that she fled and she and Mark became refugees, first in Germany and then in Israel. They ultimately came to America.

Priska returned to Slovakia with Moran, where she lived until she died at 90 years old.

Holden highlighted the importance of the mothers’ journeys, as well as the fact that their children chose to share their stories with the world.

“They are by their very ages going to be the last known survivors of the Holocaust,” Holden said. “In five, 10 years time, there will be nobody left but them … they are truly the voices of the voiceless and their mothers’ courage and tenacity and defiance is affirmation of the capacity of the human spirit.”