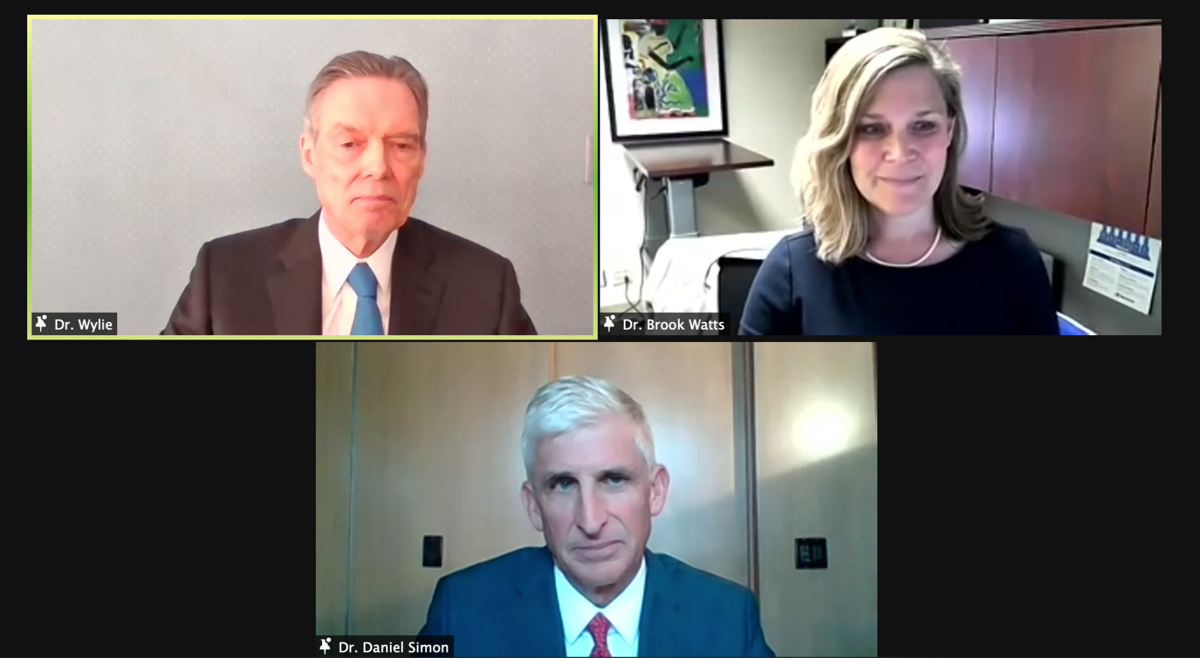 David Makovsky, the Ziegler distinguished fellow at the Washington Institute in Washington, D.C., and director of the Project on Arab-Israel Relations, answers audience questions read aloud by meeting co-chairs, Bob and Penny Greenberger.

David Makovsky, the Ziegler distinguished fellow at the Washington Institute in Washington, D.C., and director of the Project on Arab-Israel Relations, answers audience questions read aloud by meeting co-chairs, Bob and Penny Greenberger.

In celebration and commemoration of the year prior, the Jewish Federation of Cleveland highlighted its successful programming and efforts performed during COVID-19 and awarded its highest honor for exceptional civic contributions to the staffs of Cleveland Clinic, MetroHealth System and University Hospitals, all in Cleveland, during its 117th annual meeting April 21.

The meeting was attended virtually by more than 320 people.

From virtual programming to the establishment of its Coronavirus Emergency Relief Fund to direct efforts ensuring community members had access to vital resources, the Federation had to completely reorganize itself to meet the needs of Jewish Clevelanders impacted by COVID-19. It was greatly due to the collaborative efforts performed daily by Northeast Ohio’s three health care systems that organizations like the Federation were able to continue providing essential services to the community, Federation President Erika B. Rudin-Luria said in a video introducing the 2021 Charles Eisenman Award for Exceptional Civic Contributions recipients.

“This has been a really difficult year, and everyone has been impacted by the pandemic,” Rudin-Luria said. “... Every health system stepped forward and made themselves accessible in ways that the community had never before experienced. They provided a model of collaboration, of how if we leverage each other’s resources and work together, we can emerge strong through this pandemic.”

Cleveland Clinic, MetroHealth System and University Hospitals kept Northeast Ohioans informed of known and unknown COVID-19 details, worked together to make sure each had sufficient supplies required to treat in the suddenly filled up hospitals, made sure all religious and ethnic communities received proper testing opportunities and ensured readily available COVID-19 vaccines for residents – all while facing the virus head-on at every corner.

“I am very proud of how our organizations came together and continue to work together because early on, we realized that we were facing something bigger than any individual hospital, or even health care delivery system,” Wyllie said. “... Our caregivers have been an inspiration to all of us over the past year. This is true not only for the doctors and nurses, but all those who support the work of those things that need to be done every day.”

The health care systems received a citation and the Federation announced it made three donations in their honors to the Caregiver Hardship Fund at the Cleveland Clinic, the Employee Hardship Fund at MetroHealth and the UH COVID-19 Caregiver Support Fund at University Hospitals.

The keynote speaker of the meeting was David Makovsky, the Ziegler distinguished fellow at the Washington Institute in Washington, D.C., and director of the Project on Arab-Israel Relations. Makovsky covered three topics tantamount to Israeli current events: Iran negotiations, Israel’s election and the Abraham Accords.

Iranian and Israeli relations have only been made more tense with the recent explosion of an Iranian uranium enrichment facility that Iran blames Israel for causing. Talks were underway in Vienna with parties involved in the Iran nuclear deal, but Makovsky outlined that for an international consensus to occur, the United States and Israel have to work together, put aside their differing views and find ways to get Iran to agree.

“The only guide, road, pathway, to go from 1.0 to 2.0 for a better nuclear deal that everyone wants is to maintain economic pressure on Iran,” Makovsky said. “... Washington and Jerusalem have to come together on that fundamental point, which is what is the leverage to get the better deal that everybody says they want?”

When it comes to Israel’s prime minister election, Makovsky outlined three possible options that could occur in the coming weeks: Prime Minister Benjamin Netanyahu achieves the office, possibly through a requested direct election; Yamina leader Naftali Bennett forms his own coalition and unites all Knesset sides against Netanyahu; or an unprecedented fifth election is planned.

Makovsy’s final piece was that Israel and the United Arab Emirates have a relationship stronger than ever due to the Abraham Accords, a joint statement created in 2020 between Israel, the U.A.E. and the U.S. These close ties have the possibility to bring the Middle East together, Makovsky said.

“This has the hope of being a peace between peoples,” Makovsky said. “This is something if you’ve got a son or a daughter in college and say, ‘What is an exciting story in the world you want to follow?’ I would say follow the story of the Emirati-Israeli peace because high-tech is going to bring Israelis and Arabs together.”

At the 117th annual meeting, held virtually this year due to COVID-19, the Jewish Federation of Cleveland elected the following new officers:

Publisher’s note: Rabbi Rosette Baron Haim and Ethan Karp are members of the Cleveland Jewish Publication Company Board of Directors.

The Jewish Federation of Cleveland will present its highest honor for exceptional civic contributions to the staffs of Cleveland Clinic, Metro…