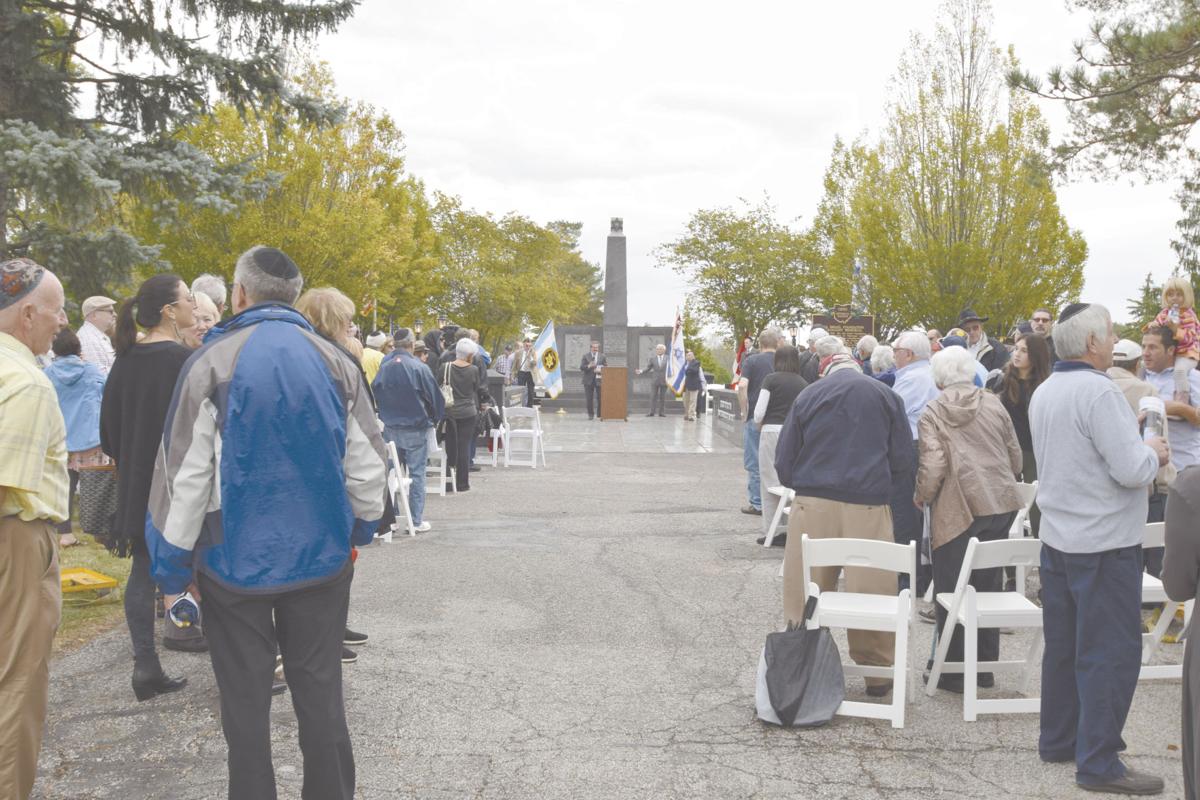 Attendees at Kol Israel’s 2019 Fall Memorial wait for the honor guards of members of the Jewish War Veterans to conclude the memorial by walking down the aisle Oct. 6 at Zion Memorial Park in Bedford Height. 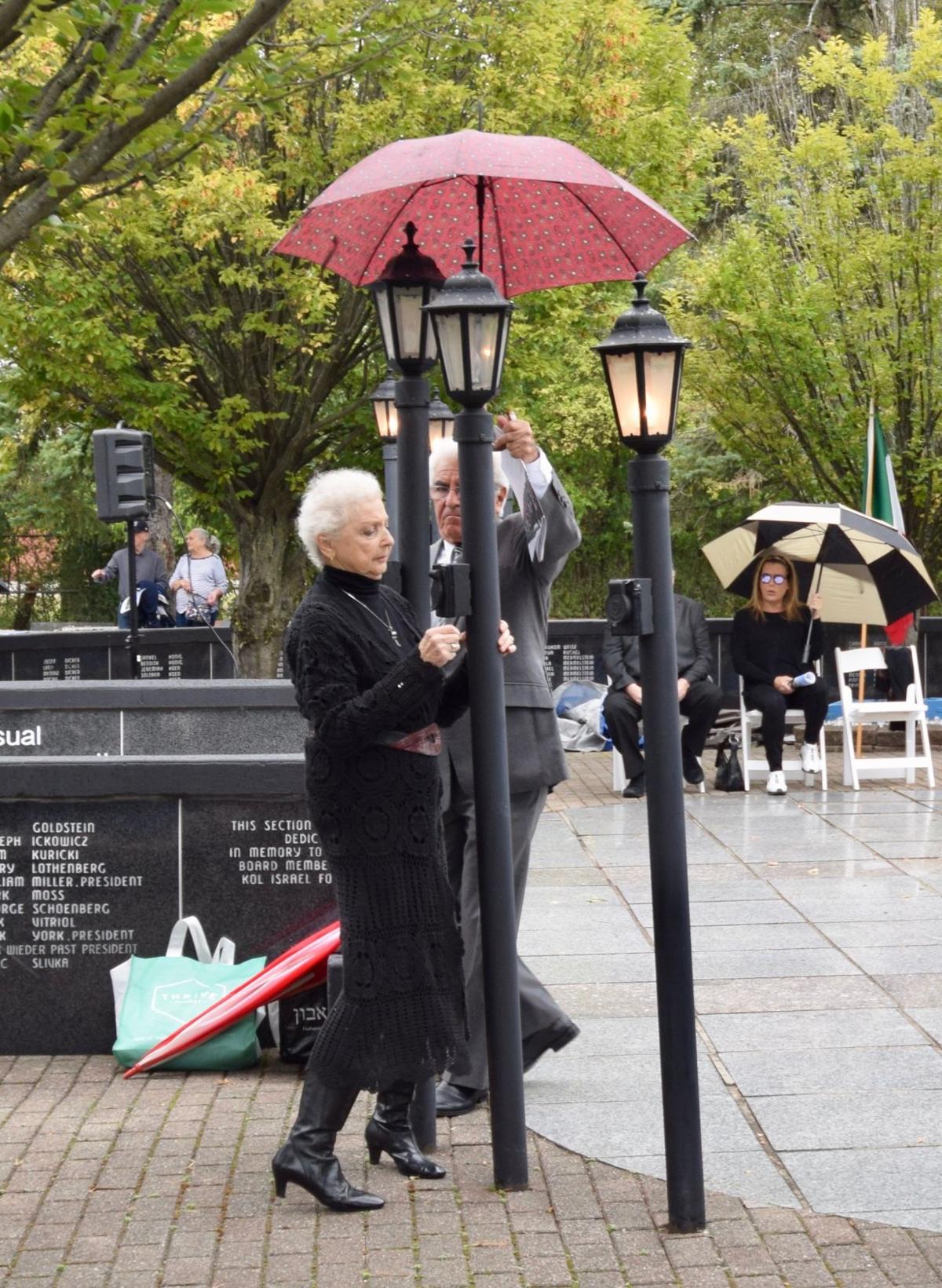 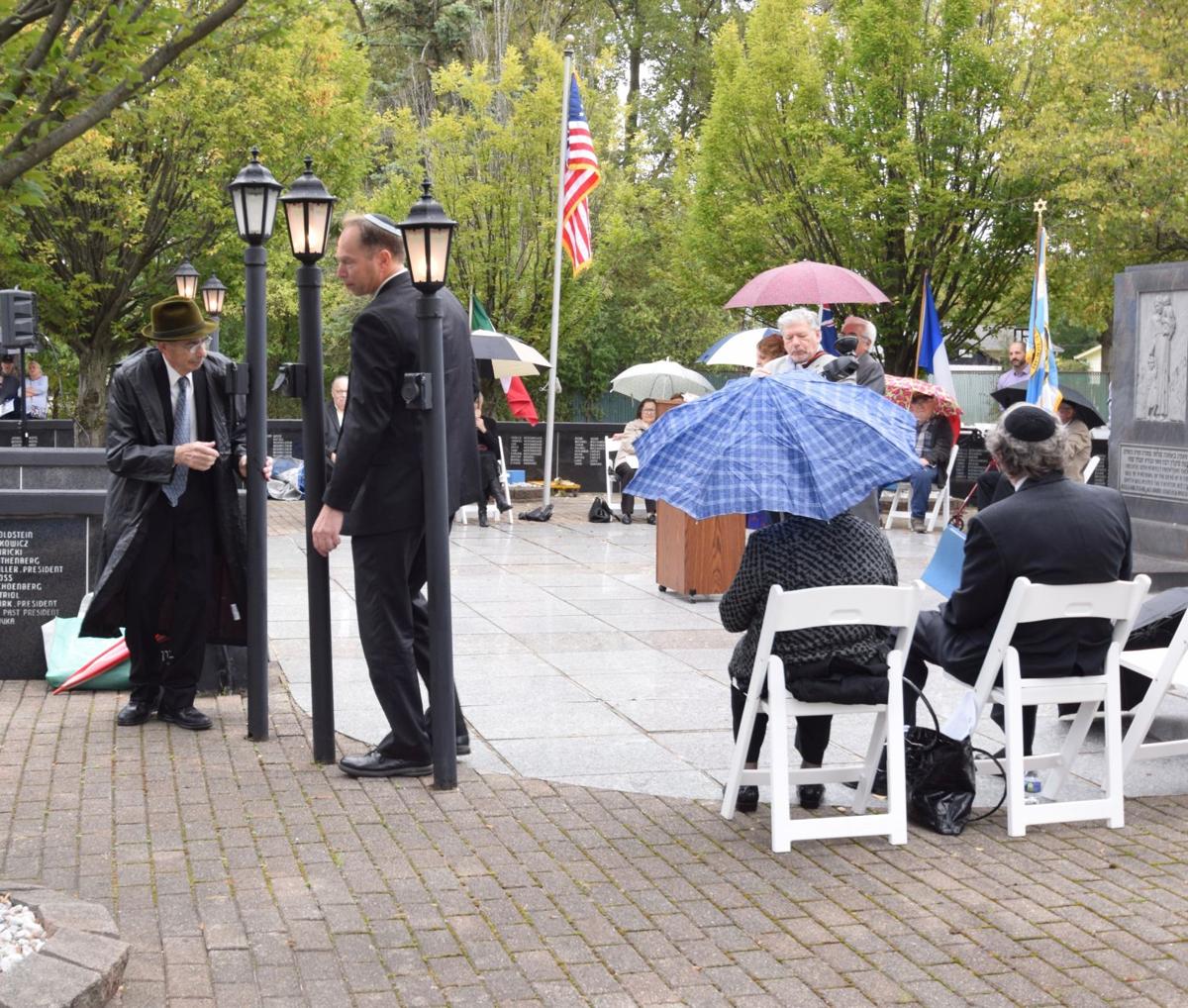 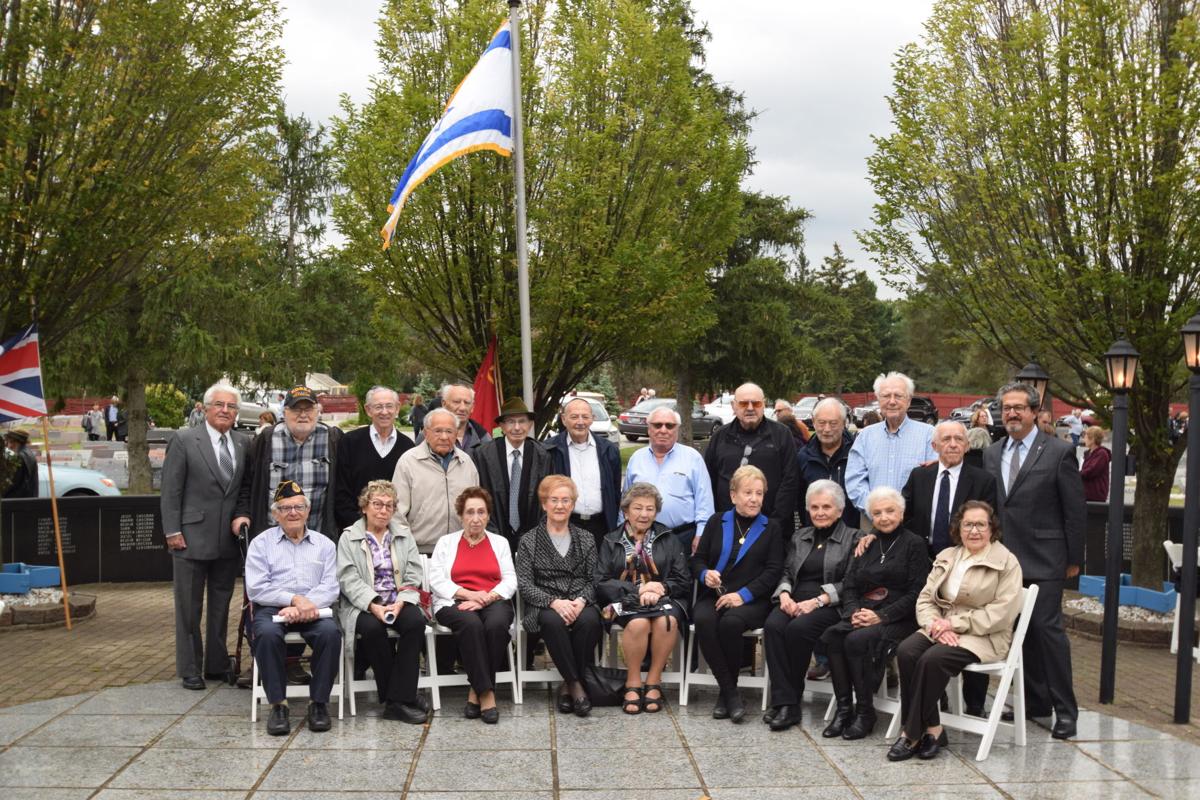 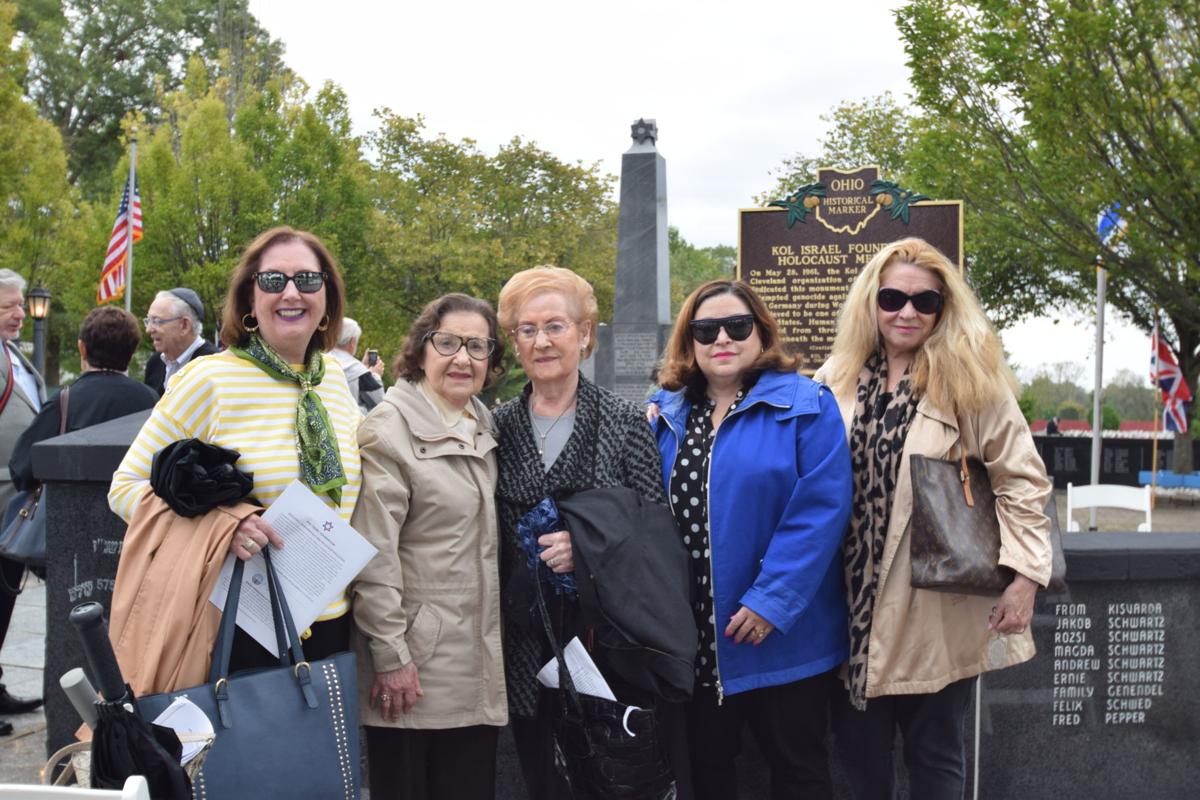 Attendees at Kol Israel’s 2019 Fall Memorial wait for the honor guards of members of the Jewish War Veterans to conclude the memorial by walking down the aisle Oct. 6 at Zion Memorial Park in Bedford Height.

Even 74 years after the end of the Holocaust, the wounds felt by the Jewish community are still painful, despite time attempting to heal them over into scars.

Six million Jewish men, women and children lost their lives in the Holocaust, and Kol Israel’s 58th annual Fall Memorial at Zion Memorial Park in Bedford Heights on Oct. 6 encouraged those present to remember, never forget and educate others so that the memories of those lost lives never fade away.

Befitting the solemn occasion with gray skies and on-and-off rain, hundreds of people came to give pause to their everyday lives to listen to speakers, prayers and the lighting of seven candles performed by survivors, or their children, by flipping switches on electrical lampposts.

“When the Kol Israel Foundation was born in 1959, it was the goal of our founders to provide emotional support and social participation for Cleveland’s survivors of the Holocaust,” said Mark S. Frank, president of the Kol Israel Foundation. “Further, it was to establish that closure would honor and memorialize those that did not survive as it is the tradition to visit the graves of our ancestors and recite the memorial prayers between the High Holidays of Rosh Hashanah and Yom Kippur.”

Following a series of introductions and prayers made by Michael Hennenberg and Charles Gruenspan was the candlelighting.

The first candle was lit by Phil and Libby Neuman, children of Frances Neuman, a Holocaust survivor born in Poland, and her husband, Stanley. Frances was sent to a work camp before being liberated by Russia in May 1945, and then immigrated to Cleveland, where she attended Cleveland Heights High School. After moving to New Jersey in 1980, Frances passed in 2018 and Stanley in 2002.

The second candle was lit by Rita Pollack, a survivor born in Czechoslovakia. Pollack spent time in the Stutthof concentration camp with her mother and sisters doing forced labor before being liberated by Russia in March 1945. She and her family moved to Prague before immigrating to the U.S. in 1949 and Cleveland in 1951.

Harry and Lee Lerer, children of Anna and Abram Lerer, lit the third candle. Abram was born in what is now Belarus and was sent to a ghetto in Ukraine with his parents, sister, wife and young child. He escaped and fought alongside the Jewish partisans, but then discovered later his family was dead. On his way to Rome, Abram met Anna, who was born in Romania and had been liberated from Auschwitz and Ravensbruck in May 1945. Abram and Anna fled to the United States in 1950 until Abram’s death in 1979 and Anna’s death in 2016.

Sarah Radzeli, a survivor born in Czechoslovakia, lit the fourth candle. Radzeli spent time in Auschwitz before liberation, and then she moved around with her brother where she then illegally boarded a ship to get to Haifa but was then forced to Cyprus when the ship was attacked by British soldiers. She moved to Philadelphia with her husband and son, Michael, and then moved to Cleveland following her husband’s death in 1969 to join family. Radzeli married Louis Radzeli, also a survivor, where the two lived together until Louis’ death in 2019.

Rose Gelbart, a survivor who grew up in Poland, lit the fifth candle. Gelbart and her mother escaped a ghetto and traveled to Warsaw where they stayed the rest of the war. Gelbart, her mother and her mother’s new husband immigrated to the U.S. in 1951 where she attended Glenville High School in Cleveland. In 1955, Gelbart married Arthur Gelbart, who was liberated from Buchenwald. She helped found the Kol Israel Sisterhood in the 1960s.

Lou Muller, a survivor who grew up in Hungary, lit the sixth candle. Muller was put into a forced labor camp in 1944, where he was kept until partisan fighters and Russian troops liberated him. He escaped from the liberators and immigrated to the American zone before moving to Montreal in 1948. He moved to Cleveland in 1955 after an uncle sponsored him, and he met his wife, Josephine, also a survivor, whom he married in 1956.

The seventh candle was lit by second-, third- and fourth-generation descendants of the Somogyi/Newman family in memory of the children who perished in the Holocaust.

Cousins Sheila Pearl Pickholtz and Hedy Pollack Silber, both of Beachwood, attend the fall memorial every year. Their parents and family members are Holocaust survivors, and Silber’s mother, Rita, and Rita’s cousin, Sarah Radzeli, took place in the candlelighting.

“My aunt, who died 13 years ago, said on her death bed in 2006 that the world is on fire,” Silber said about Pickholtz’s mother. “She said it’s 1938 all over again with all the hatred happening. She saw that.”

In regards to the increase in violence and ways to counteract that, Frank informed the audience how important it is to not let the Holocaust be forgotten and how education could stop hate.

“Yes, Kol Israel’s goal to honor and memorialize the losses and victims of the Holocaust have been accomplished and recognized by the community, but there is still more to do. The world’s current climate of hate, bigotry, violence, terrorism and the increased rise of anti-Semitism causes us now to accomplish a new goal and to try to avoid the peril of history repeating itself. This can only be done by educating those who do not know, those who deny and those who are being influenced to act, to act out by others who have not understood and continue to persecute their fellow human beings.”

The memorial concluded with additional speeches and prayers by Erika B. Rudin-Luria, president of the Jewish Federation of Cleveland, Rabbi Pinchas Landis, education director for Partners In Torah, and Gruenspan.

Rudin-Luria, also a granddaughter of a liberator, spoke of the importance of the Kol Israel Foundation and that even in death, those in attendance carry with them those who were lost in the Holocaust.

“The survivors who arrived in Cleveland after the war faced a daunting task to rebuild their lives and build their community to keep alive the memories and move forward with resilience and spirit,” Rudin-Luria said. “And they did. As we stand here today in the presence of this monument, we see their mission fulfilled. We see it in our schools, our community centers and our places of worship, but most of all, we see it in the faces of the people gathered here today.”

Pinchas, a third-generation survivor, told the story of a Holocaust survivor who did his best to fight for Judaism and Jewish people and never backed down.

“We read at the time of Passover and the Haggadah...‘every single generation’... ‘they have a risen to try and destroy us’...‘but the Almighty in heaven saves us from their hands,’” Pinchas said. “We’re here to memorialize the most tragic, disturbing and disgusting culmination of those words in world history. The combination of the timeless anti-Semitism with German ingenuity and modern technology brought these words to a level they had never seen before in that time, yet we’re still here. We’re the ones who are here saying ...‘we have a perfect faith.’ And just like (a Holocaust survivor) said those words on his trip to Rome, we all can stand and say the same exact words with pride. Hitler!...We are here!... Where are you?’”

Kol Israel Foundation is celebrating its 60th year with an Oct. 27 dinner as it recalls a legacy of Holocaust remembrance, charitable works, a…