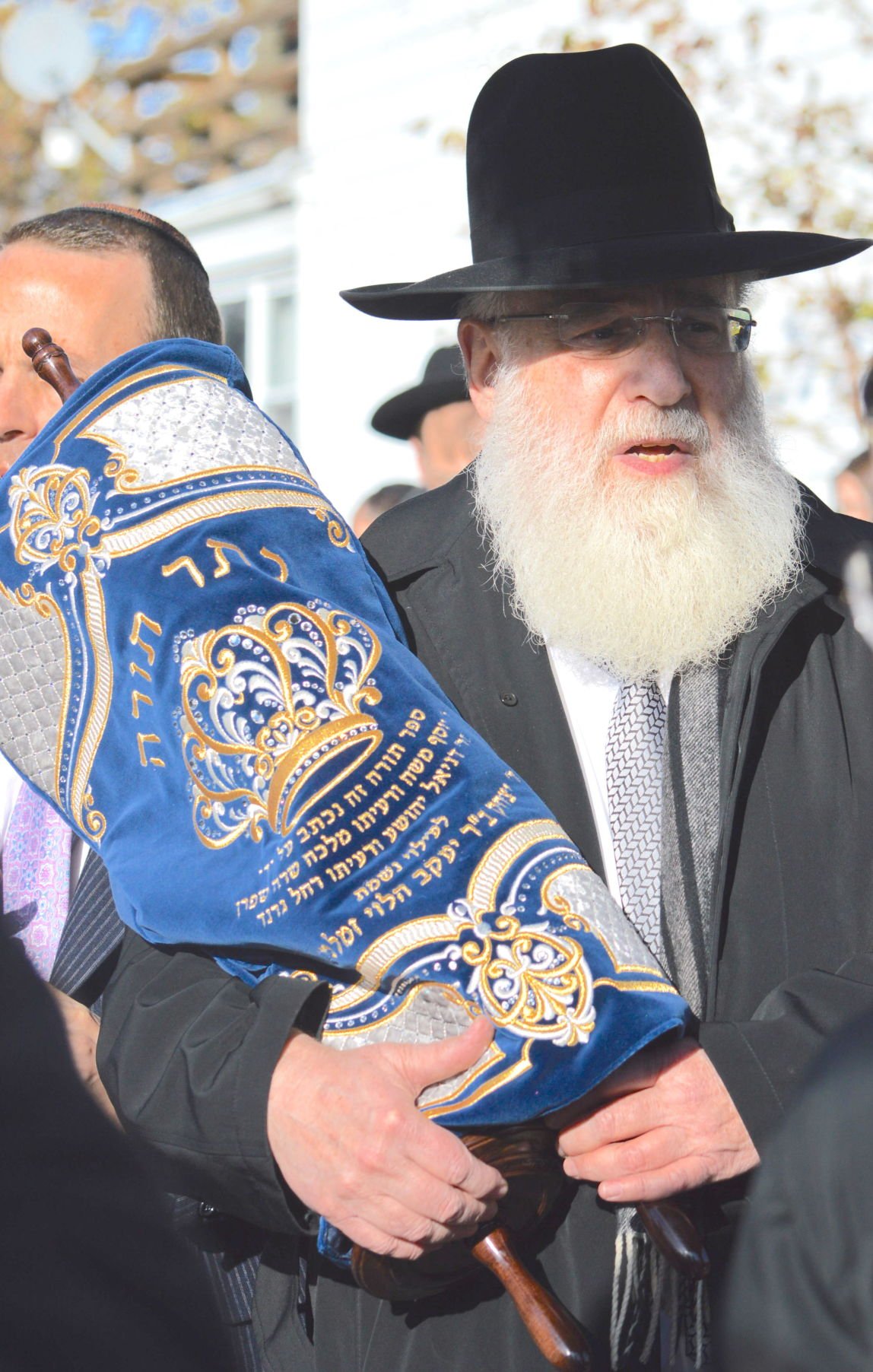 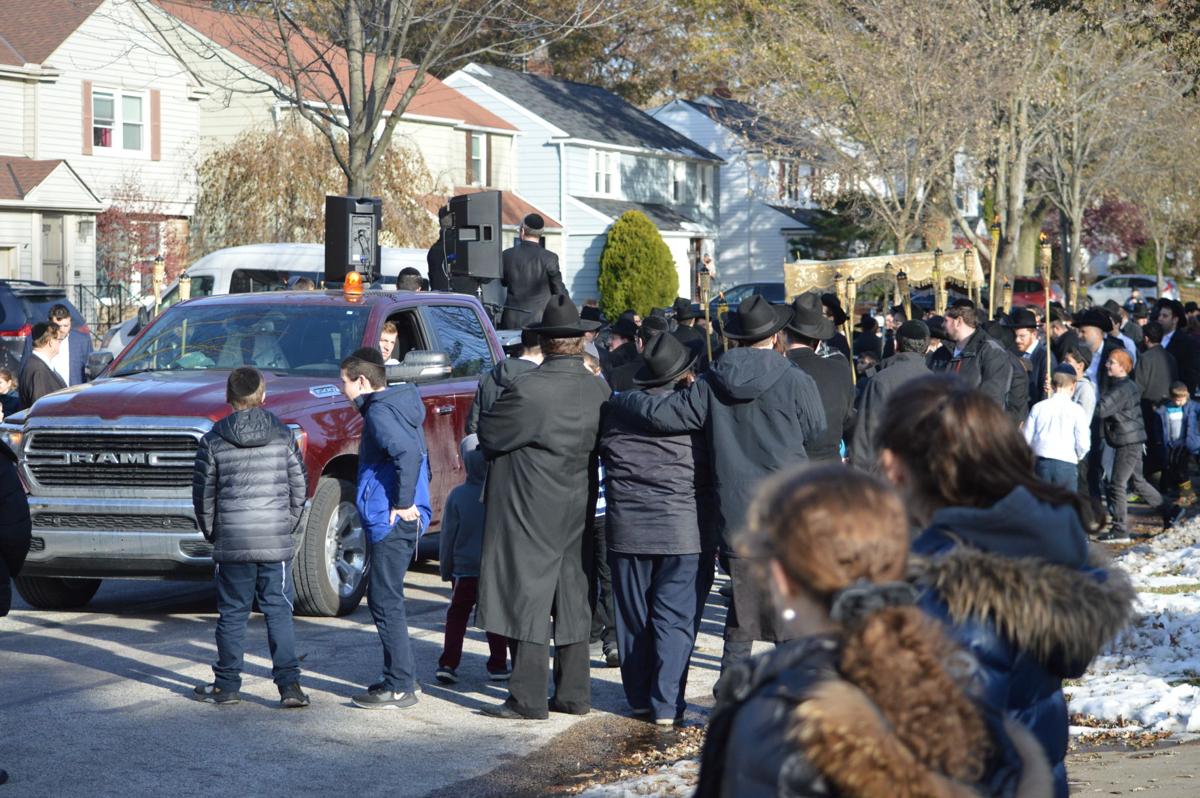 People joined the processional as it moved from the home of Shelly Zemelman to  Beachwood Kollel about three blocks away on South Green Road. | CJN Photo / Jane Kaufman 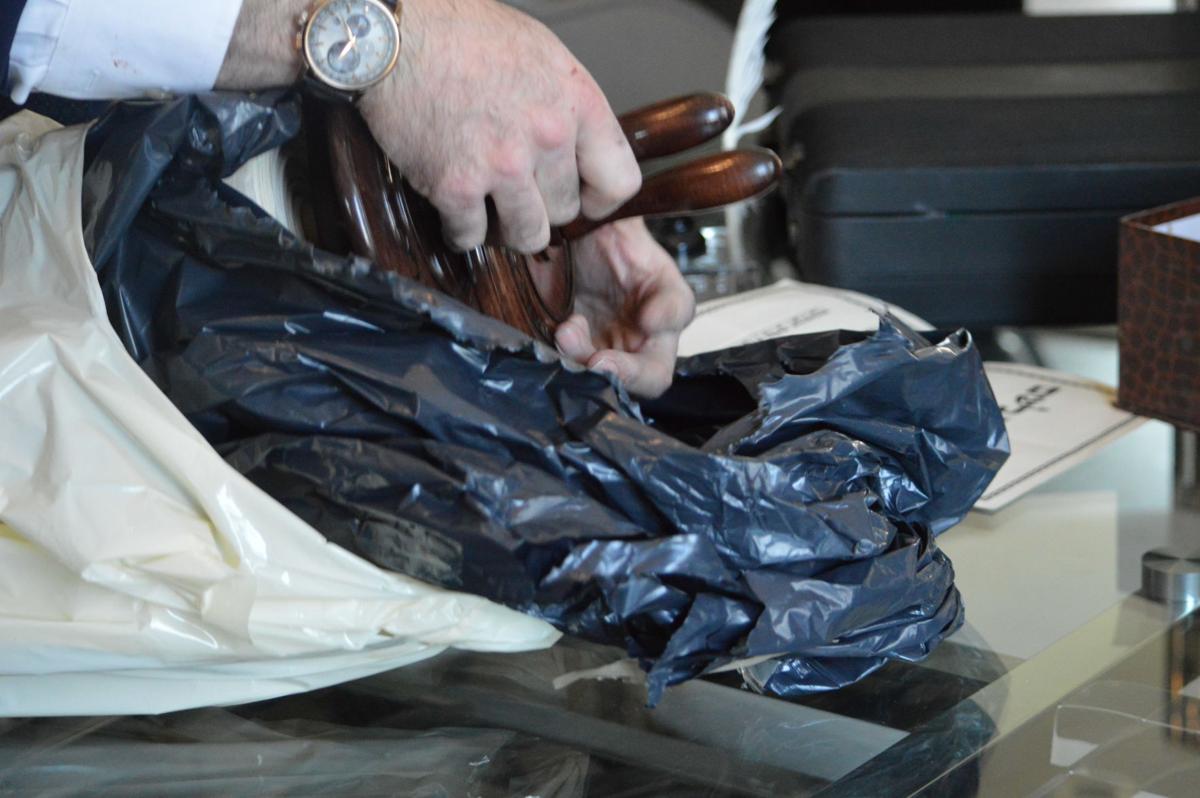 The Torah scroll is unwrapped. About 125 letters were left unfinished in the final portion of Deuteronomy for the final ceremony. | CJN Photo / Jane Kaufman 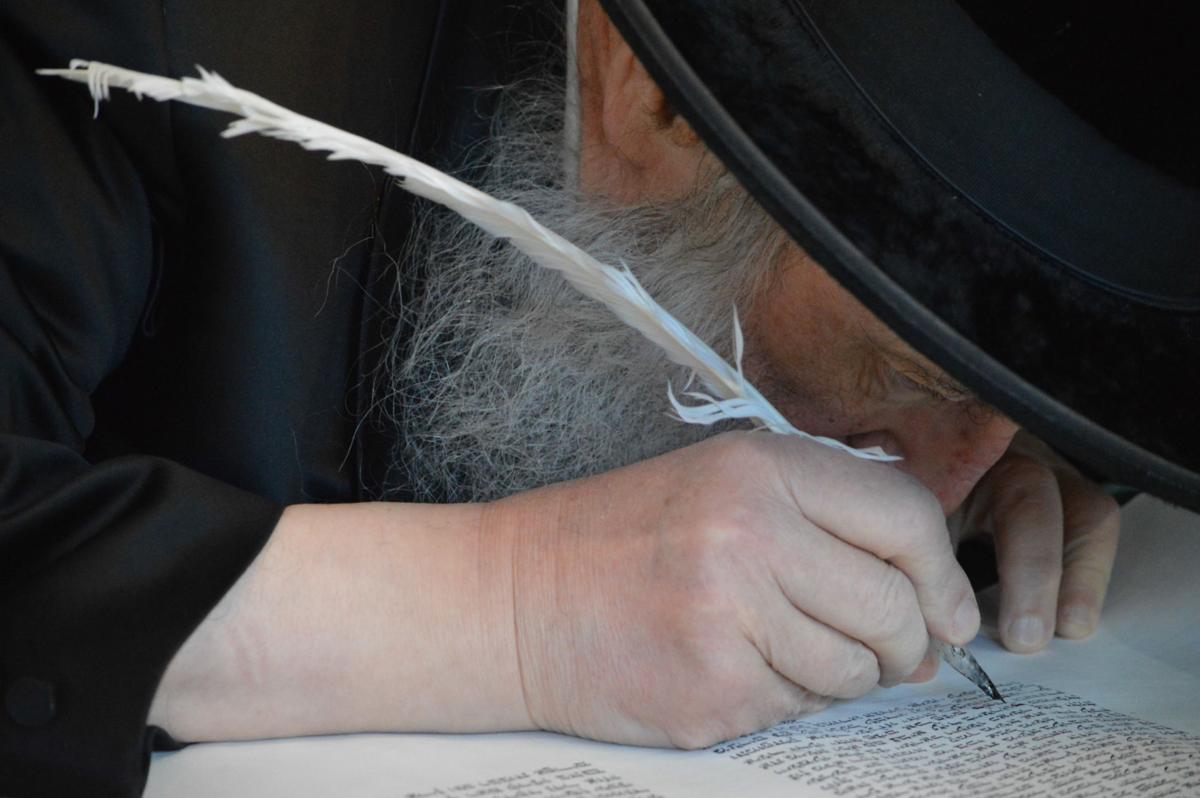 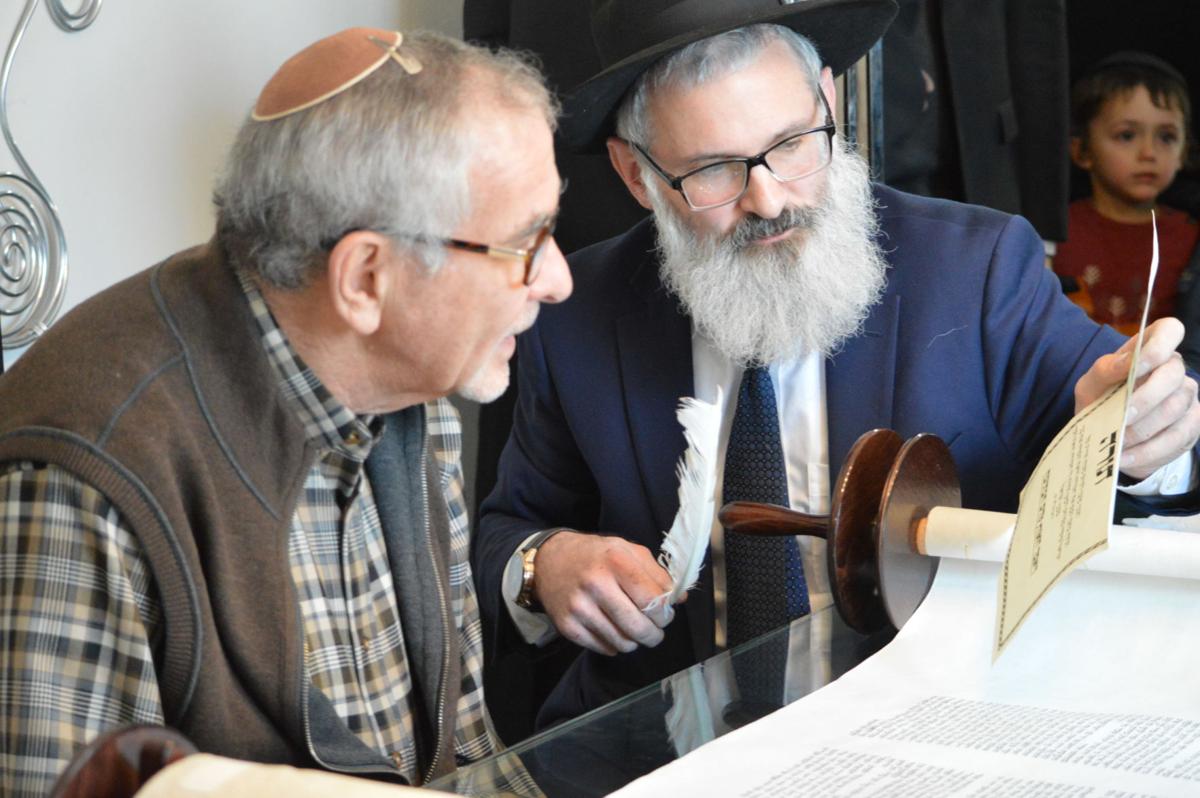 Joseph Shafran, left, recites the blessing prior to writing a letter in the Torah. Shafran, who paid for the scroll for Beachwood Kollel, inked the final lamed in the last word of the Torah, Yisrael. | CJN Photo / Jane Kaufman 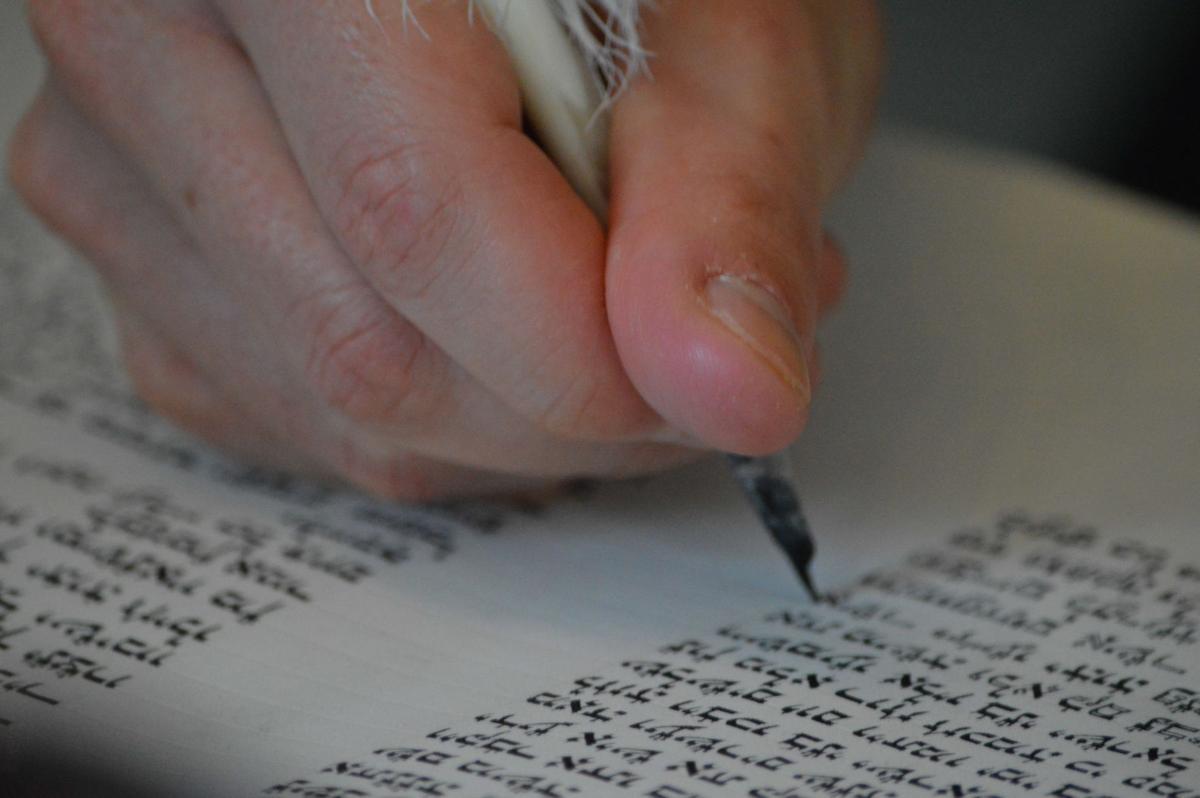 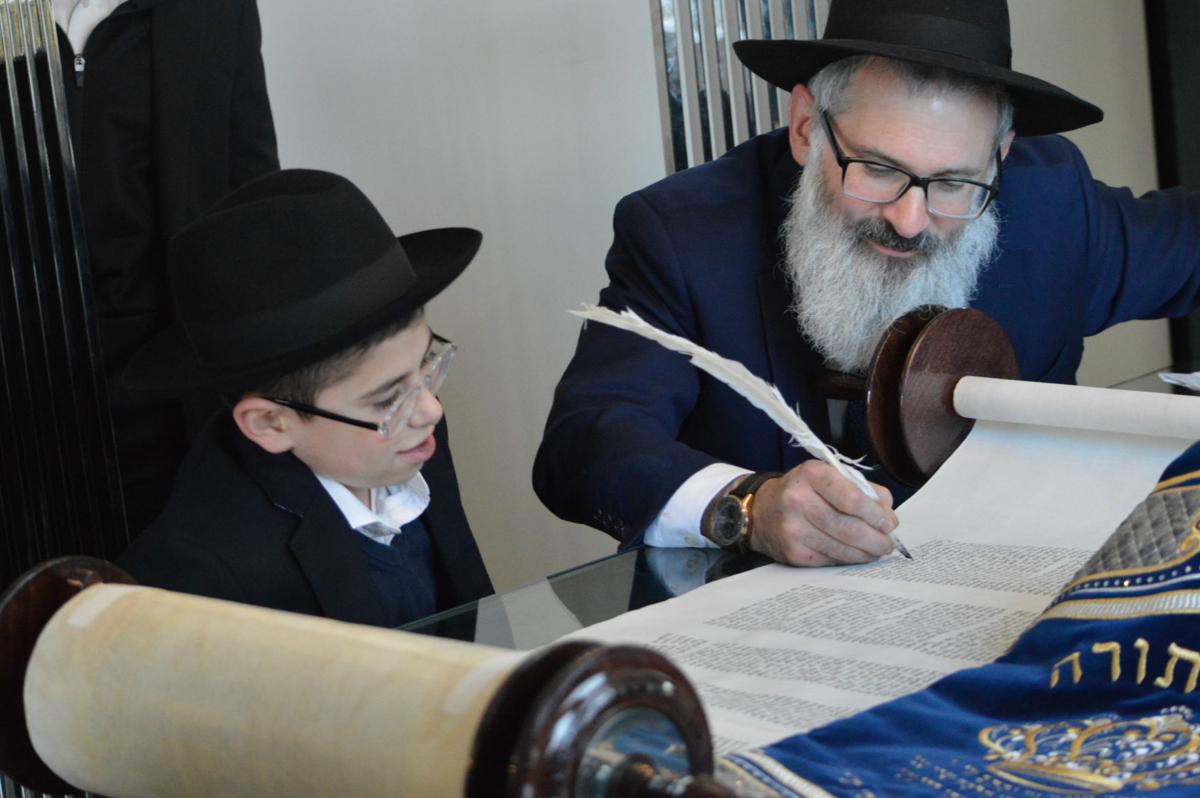 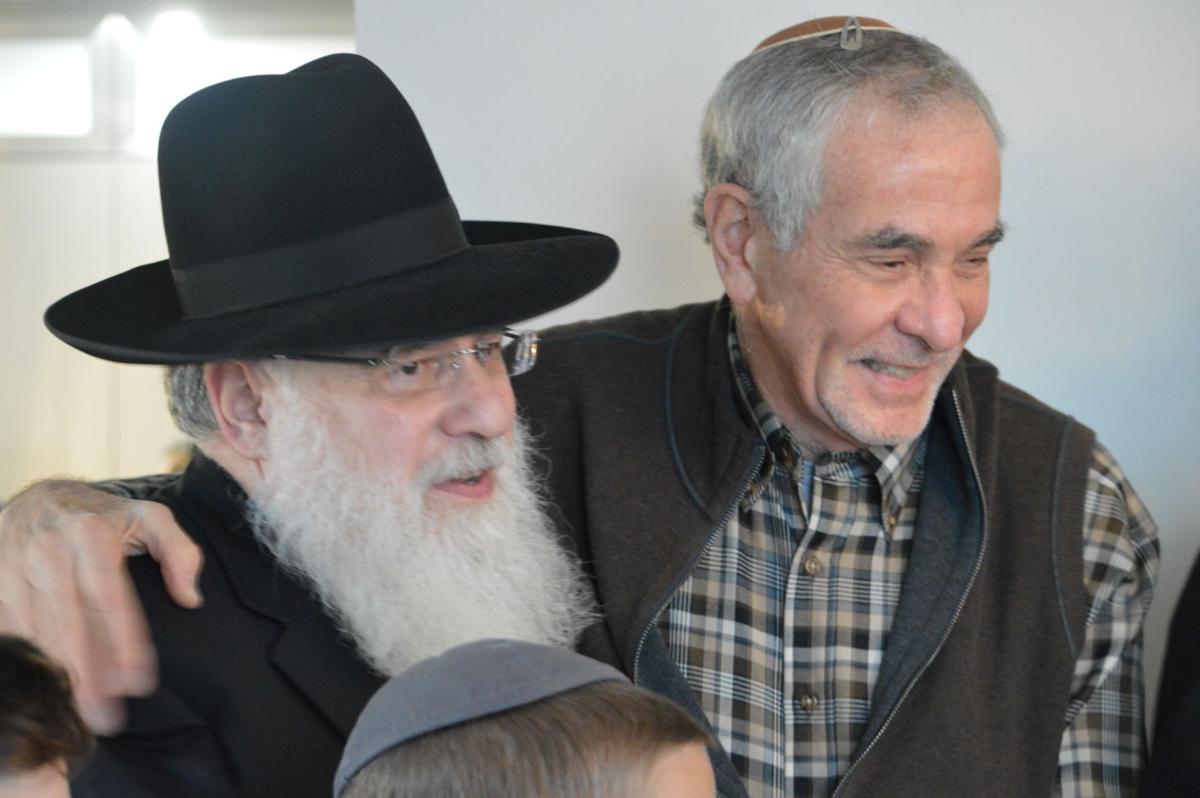 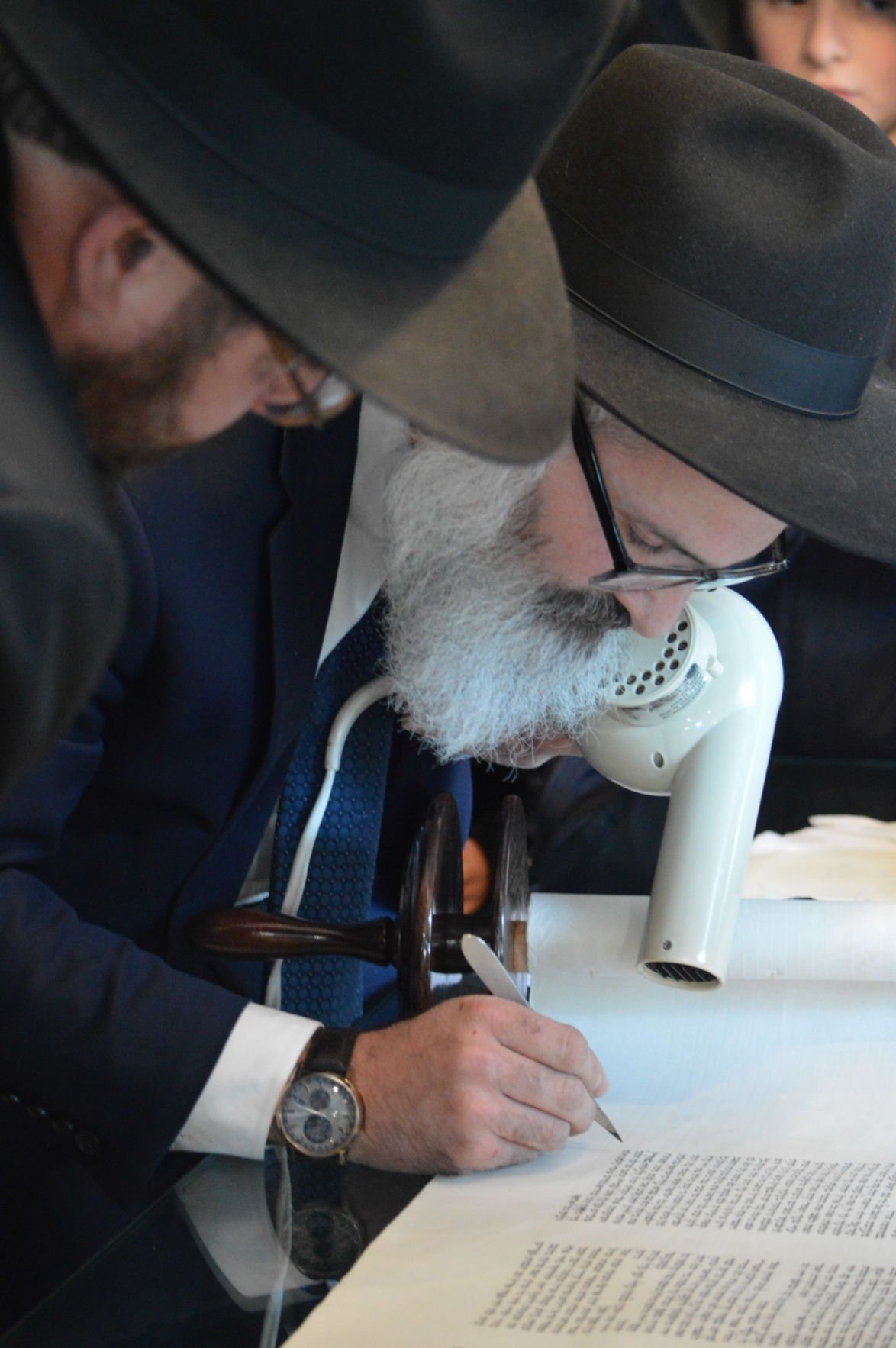 After the final letter was added to the Torah scroll, sofer Joseph Heinemann, a scribe, uses a blow dryer to hasten the drying of ink.| CJN Photo / Jane Kaufman 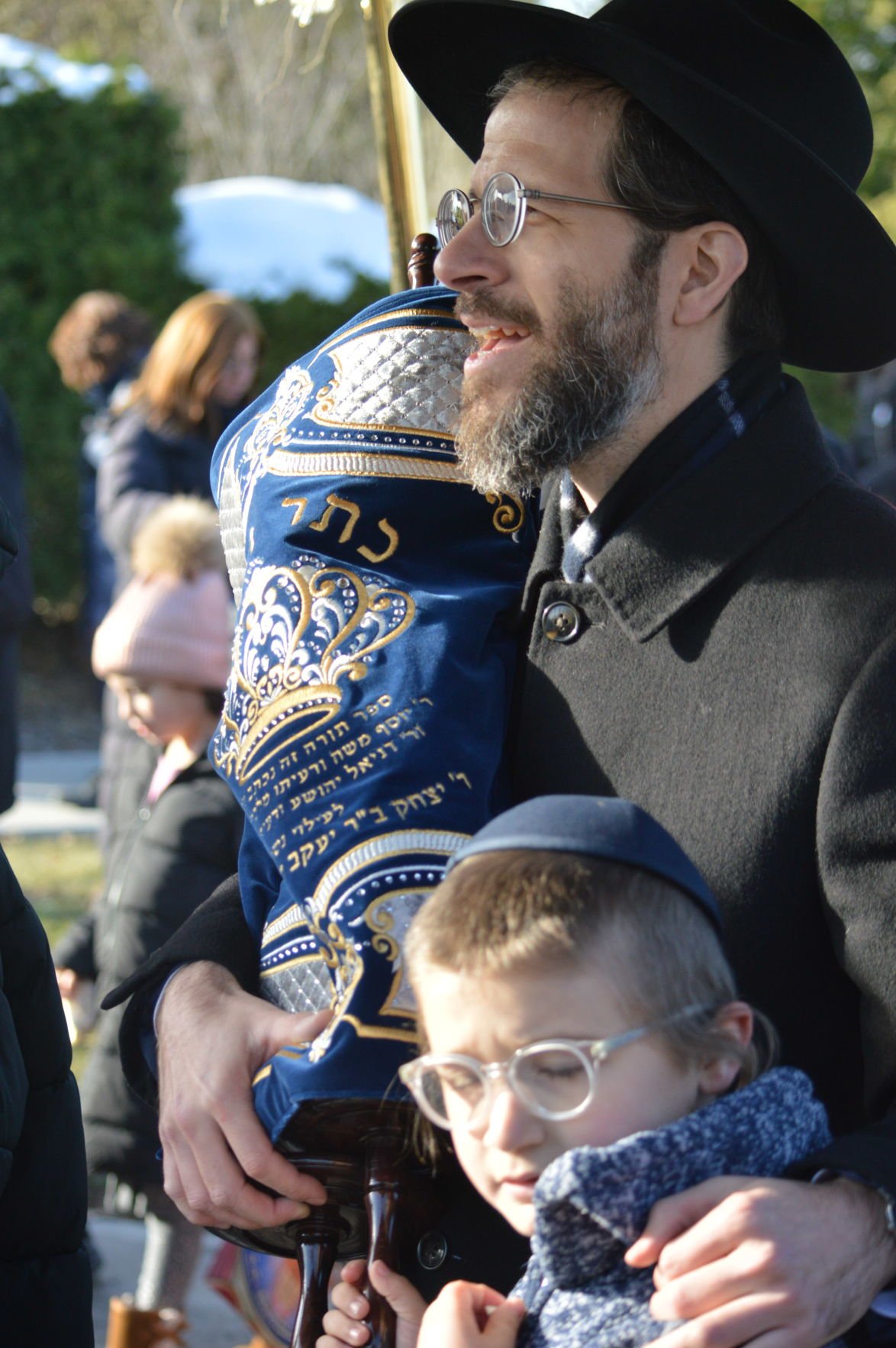 Many men carried the Torah on its way to Beachwood Kollel. | CJN Photo / Jane Kaufman 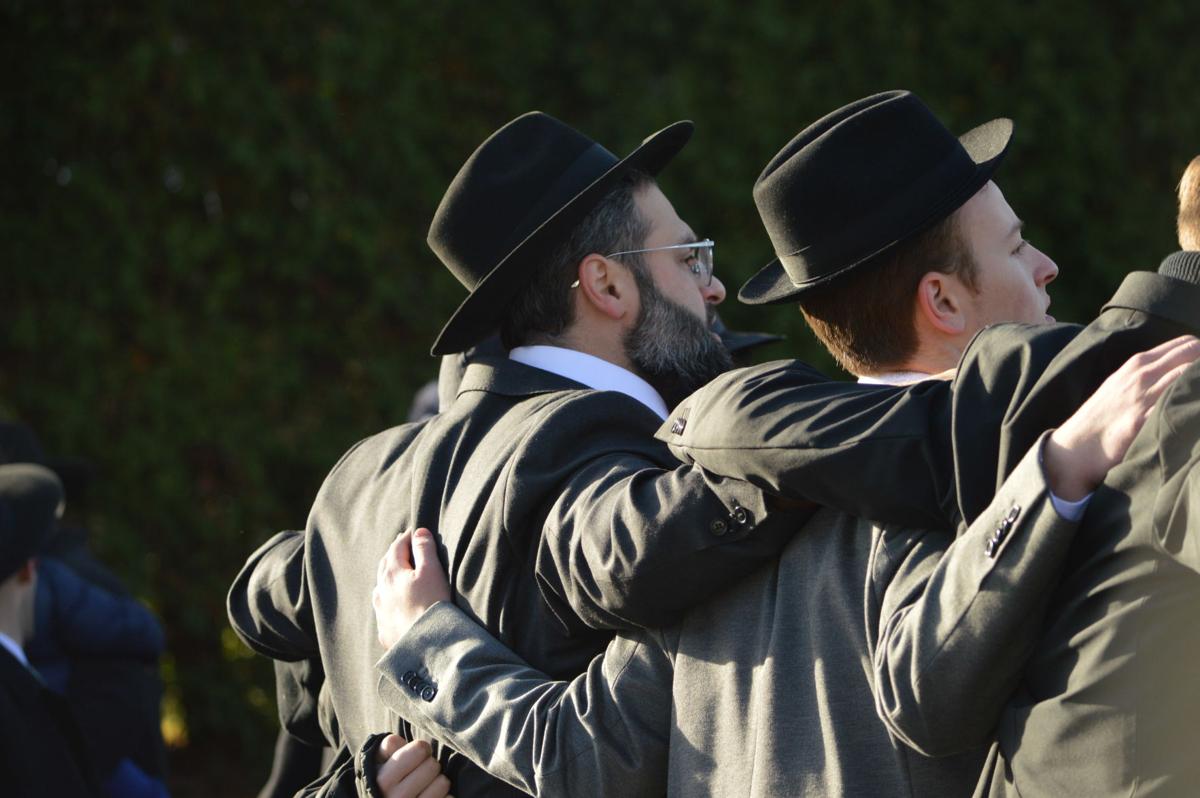 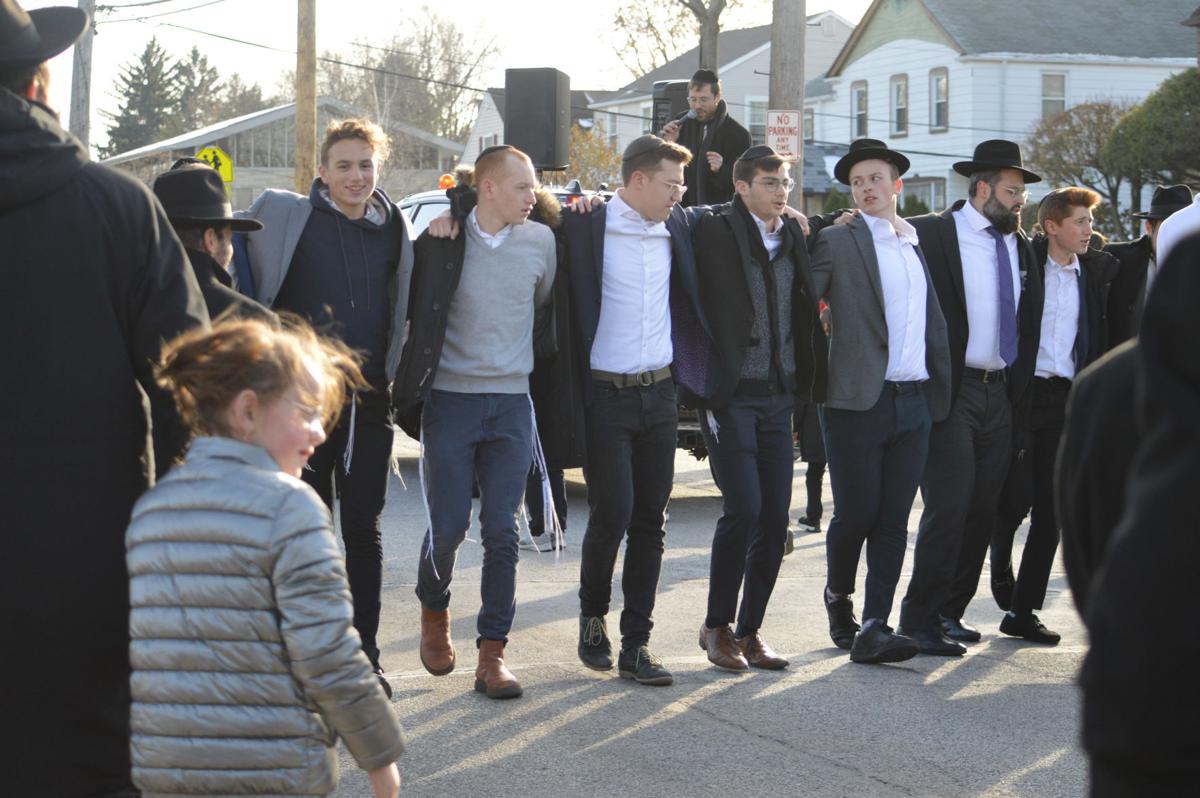 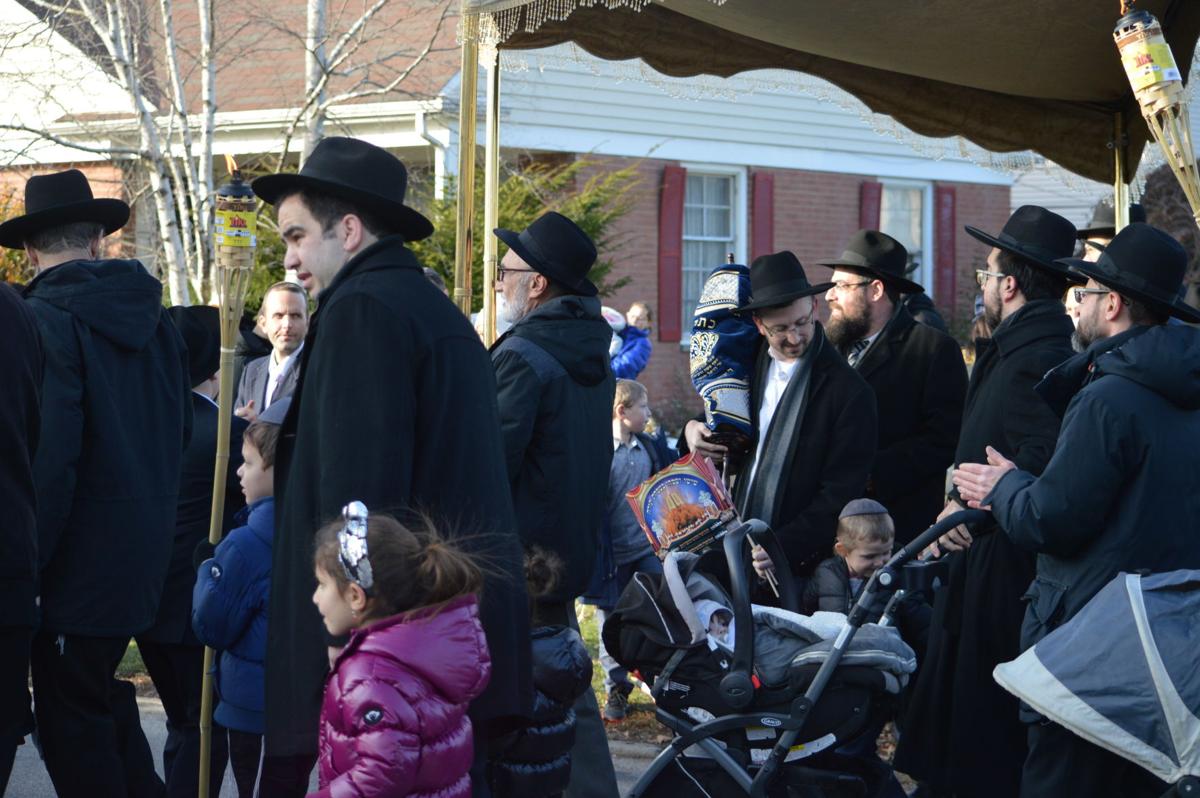 The Torah scroll is unwrapped. About 125 letters were left unfinished in the final portion of Deuteronomy for the final ceremony. | CJN Photo / Jane Kaufman

Joseph Shafran, left, recites the blessing prior to writing a letter in the Torah. Shafran, who paid for the scroll for Beachwood Kollel, inked the final lamed in the last word of the Torah, Yisrael. | CJN Photo / Jane Kaufman

Many men carried the Torah on its way to Beachwood Kollel. | CJN Photo / Jane Kaufman

Dozens of rabbis and Torah scholars flocked to the home of Shelly Zemelman Nov. 17 to make their mark on a Torah destined for the Beachwood Kollel.

Joseph Heinemann, a sofer or scribe, added the finishing touches, using a blow dryer to hasten the drying process. Then a group of about 300 people with tiki torches and a gold fringed canopy walked, sang and danced their way to the Beachwood Kollel three blocks away.

The sefer Torah, or Torah scroll, is Beachwood Kollel’s first.

Men and boys linked arms in lines dancing in the street as South Green Road was blocked from vehicular traffic. Women with strollers took to the sidewalks or the edges of the parade. Traditional music cranked from speakers on the bed of a pickup truck, with a singer whipping up the celebration.

Along the way, neighbors joined, swelling the ranks of the processional, or watched from their houses as the group walked under sunny skies with temperatures in the low 40s. The celebration continued at the building at 2840 South Green Road in University Heights.

Founded by Yakov Katz in 1995, the Beachwood Kollel met at Congregation Zichron Chaim prior to constructing its own building, which opened in 2016. With a primary focus on men’s study, the Beis Midrash has slowly added services to its repertoire.

Both Katz and his son Rabbi Faivel Katz, who each have the title of Rosh Kollel, spoke of acquiring a Torah as a milestone.

Beachwood Kollel attracts men and boys from synagogues and day schools, many, but not all, Orthodox. And that was reflected by the composition of those who came to take part in the finishing of the Torah scroll.

Rabbi Naftoli Weiss of Brooklyn, the Spinka Rebbe, in town to hold a tish, or study, took off his glasses and leaned in close to the parchment to leave his mark.

“I had a ‘Mom’ moment,” quipped Sheila Rosen-Schiff, who stood at the table with her cell phone capturing images of participants during the two-hour session. “I said, ‘Rabbi,’ and everyone looked.”

After leaving his mark on the scroll, Rabbi Yecheskel Munk, who taught at Telshe Yeshiva in Wickliffe, took a seat at the head of the table to watch others recite the brief blessing and fill in a letter.

Heinemann made corrections along the way, shaking hands with the men and boys once they finished. In preparation for the ritual, he used a razor blade to sharpen the tip of a white feather.

When Tibor Rosenberg, the kosher butcher, took his place beside Heinemann, he deferred to the scribe to do the writing in his honor.

“I can help you cut chicken,” he said.

When it finally came time for the last letter to be inked in, Shafran sat down to admire the scroll. He then wrote the letter lamed in Yisrael, Hebrew for Israel. Shafran had also written the first letter in the Torah, the letter beis is Bereishis.

He echoed the sentiments of others, including Heinemann, who found the lettering to be beautiful. The new Torah scroll was penned in Israel.

“It’s a mazel,” Shafran said after taking part in the mitzvah. “It’s just a mazel.”

Zemelman was a native of Haifa, Israel who came to Cleveland after being encouraged by his late cousin Milton Wolf, who was ambassador to Austria, to study at Case Western Reserve University.

He later met his wife, Shelly, a Cleveland native, when she returned from two years of study in Israel.

“It’s an honor to be able to write in the beginning and now in the end,” said their son, Naftali Zemelman. The ceremony to start the writing of the scroll, more than a year ago, featured a speaker.

Prior to the flurry of activity on Nov. 17, Rabbi Binyamin Blau of Green Road Synagogue stopped by to see Shelly Zemelman. He had high praise for the Beachwood Kollel and for Yitzhak Zemelman.

“He was really such a fine person,” Blau said. “When he did something, he did it with all his heart.”