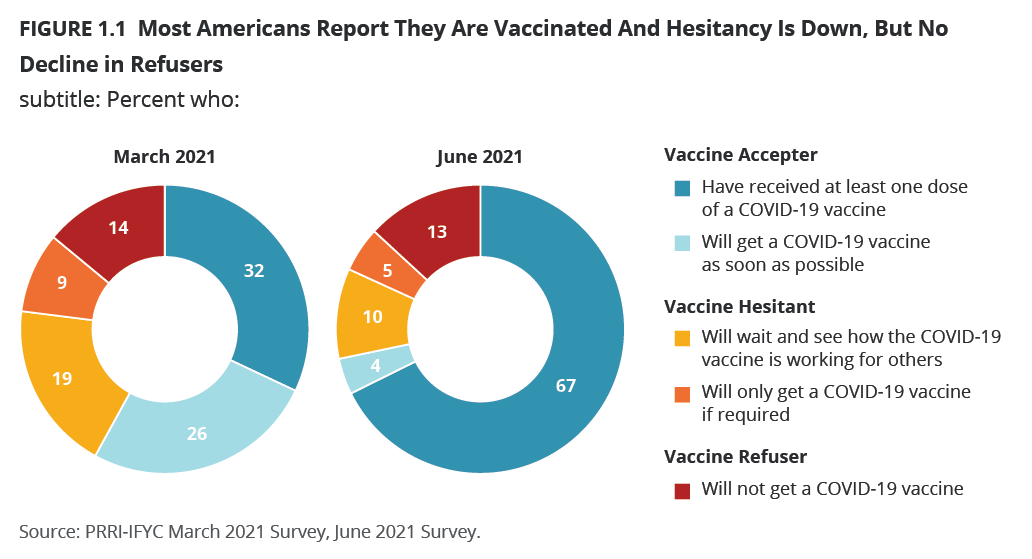 Eighty-five percent of Jewish Americans are accepting of the COVID-19 vaccine, according to a study conducted by the Public Religion Research Institute. The study surveyed several religious groups and subgroups, such as Black Protestants, Hispanic Catholics, White Evangelical Protestants and others.

The survey was conducted in March, and again in June, to present the changes in attitudes toward vaccine-related issues over time. Despite being the religious group that was most accepting of vaccines at 85%, Jewish Americans notably have not increased in their likelihood of getting the COVID-19 vaccine since March, staying stagnant at 85%. All other religious groups have seen acceptance increases of at least 10%.

The United States fell short of the 70% vaccinated goal the Biden administration set for the July 4th holiday, but it came close. According to Our World in Data, 48% of Americans were fully vaccinated by July 4. As of Aug. 1, that number rose to 50.2%, while 58.3% had gotten at least one dose.

Among religious groups, Hispanic Catholics have increased most in vaccine acceptance, from 56% in March to 80% in June. Nearly eight in 10 white Catholics (79%) are also vaccine acceptors, up from 68% in March. Other non-Christians (78%), other Christians (77%), the religiously unaffiliated (75%), and white mainline Protestants (74%) also saw increases of 11 to 15 percentage points in each group.

On July 29, President Joe Biden called on state and local officials to offer residents $100 cash payments as an incentive to receive a COVID-19 vaccine. This was the latest push by federal and state governments to incentivize vaccines. On May 12, the state of Ohio announced a lottery system to pay randomly selected vaccine recipients up to $1 million. The state awarded a total of $4million to four vaccinated Ohioans, awarding another full college scholarships to four additionally vaccinated Ohio students

According to data collected by NBC News, there have been 125,682 “breakthrough” cases of COVID-19 among over 164.2 million Americans as of July 30. That accounts for .08% of all vaccinated individuals.

Infectious disease expert Dr. Anthony Fauci said on NBC’s “Meet the Press” last month that more than 99% of recent deaths were among the unvaccinated. Centers for Disease Control and Prevention Director Dr. Rochelle Walensky said last month that unvaccinated people accounted for over 97% of hospitalizations.

“There is a clear message that is coming through,” Walensky said at a briefing of the White House COVID-19 Response Team July 16. “This is becoming a pandemic of the unvaccinated. Our biggest concern is we are going to continue to see preventable cases, hospitalizations and sadly deaths among the unvaccinated.”

To incentivize vaccines and keep people safe, institutions such as universities around the country are requiring vaccines. Indiana University in Bloomington announced it will require proof of vaccination for all students unless they qualify for a medical, religious or ethical exemption, or if they are attending a fully online program.

Seventy-one percent of Jewish Americans support requiring proof of vaccines for activities like travel, work or school. This is the second-highest number behind what PRRI classified as “other Christians” at 72%.

Jewish Americans were also less likely to report at least moderate concerns about COVID-19 vaccines, with 28% reporting they had worries. Nearly seven in 10 Hispanic Protestants (69%) and about six in ten Black Protestants (59%) reported moderate or major concerns about vaccines.

Republicans remain less likely than independents or Democrats to be vaccine acceptors at 63%, compared to independents (71%) or Democrats (85%). However, this is an increase from March when just 58% of Republicans felt accepting of the vaccine, according to the survey.

Men are slightly more likely than women to have gotten a dose of a vaccine or to say they will get one as soon as possible, at 73% of men compared to 69% of women. However, women have seen a slightly larger increase in acceptance since March, going from 54% to 69%, while men went from 61% to 73%.