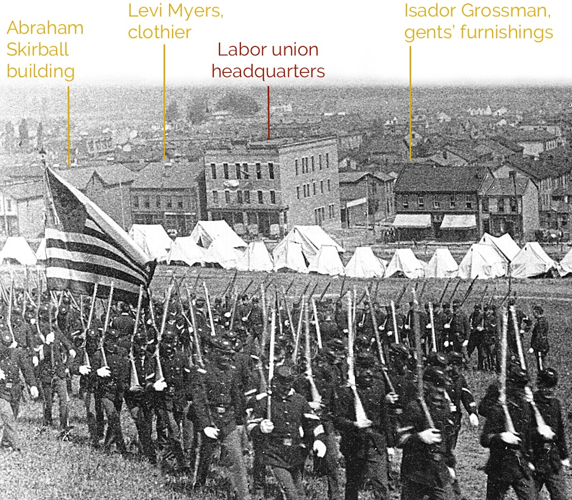 The Pennsylvania State Militia enters Homestead, Pa., on July 12, 1892 during a labor dispute marching past Jewish homes and businesses. 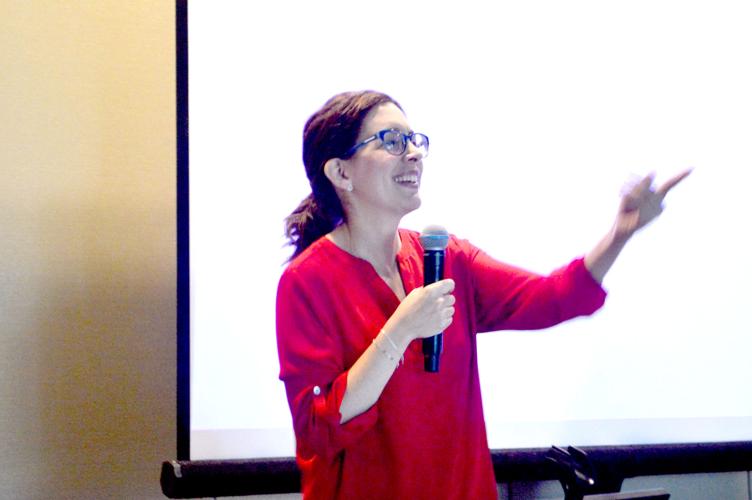 Tammy A. Hepps discusses the Pennsylvania State Militia as it enters Homestead, Pa., on July 12, 1892 during a labor dispute marching past Jewish homes and businesses.

The Pennsylvania State Militia enters Homestead, Pa., on July 12, 1892 during a labor dispute marching past Jewish homes and businesses.

Tammy A. Hepps discusses the Pennsylvania State Militia as it enters Homestead, Pa., on July 12, 1892 during a labor dispute marching past Jewish homes and businesses.

For Tammy A. Hepps, genealogical research is incomplete without the context of place.

Hepps, 40, a Pittsburgh researcher with a bachelor’s degree in computer science from Harvard University in Cambridge, Mass., spoke of her five-year investigation into Homestead, Pa., in a talk called “Researching Your Small Town Jewish Community” at the 39th International Association of Jewish Genealogical Societies International Conference on Jewish Genealogy at the Hilton Cleveland Downtown.

The conference opened July 28 and closes Aug. 2. It is hosted by the Jewish Genealogy Society of Cleveland and has drawn close to 1,000 people from around the world to share their research, interpret and translate, get tips on sources and methods, and make connections with others delving into their roots.

Hepps outlined her methodology and findings in researching the history of the steel town across the Monongahela River from Pittsburgh. Her great-grandfather settled in Homestead in the 1880s after he emigrated from Hungary. Hepps also spoke of the importance of doing the type of arduous and rewarding work she has undertaken to accurately tell the stories that are quickly becoming forgotten.

“In fact, you might have experiences like me, where you go to the town and people say, 'But there weren’t Jews here,'” she told the group July 29. “It’s time to reclaim a part of our collective Jewish identity that we’re in danger of losing without even knowing it. … I call these places new world shtetls. Today, these towns are powerful places of memory.”

“Little scholarly work has been done about these places,” she said. "The bulk of the work has been done by people like me and you, people who are from these communities and feel a connection to them and are doing the best we can with the training that we have.”

Hepps spoke of the value, the gaps and pitfalls in attempting to piece together information as she first learned the dates and facts and then was able to understand the forces that drove certain events in the Jewish community of Homestead.

“It helps to know the cause and effect,” she said.

She warned against trusting any one source too deeply – even synagogue minutes or the census – and advised applying a critical lens to accounts of the day.

“Just because you find a really old source doesn’t mean that it’s right,” she said.

Synagogue records may give factual accounts of the life of a Jewish community’s most central organization, but secular (and Jewish) newspapers may help provide context. While a synagogue’s records – including meeting minutes, programs from celebrations and financial records – will help tell the story, even without access to them, a researcher can tell the story of a Jewish community through other sources, she said.

City directories, R.G. Dun & Co. Credit Reports, the American Jewish Year Book are just a few of the sources that may help a researcher find and tell the story.

Information may come from likely and unlikely places, such as tablecloths embroidered with names, advertisements in local and national newspapers, records of national Jewish organizations, cemeteries, maps, photographs in basements of former residences and in the memories of those who lived there.

She recommended circling back to research as facts become clearer and to following footnotes – not just one footnote, but a strand of footnotes from source to source – to uncover the most detailed answers to questions.

“We neglect telling these stories because they seem almost trivial in comparison to events that were happening at the same time in other places in the world that we do have a sacred obligation to never forget,” she said, referring to the deadly shooting in October 2018 at Tree of Life Congregation in Pittsburgh. “I worked this talk well before the events that happened in Squirrel Hill, but I feel really profoundly about the changes that are happening in the Jewish community and our obligation to tell the stories about how the communities have changed over time.”

Hepps became emotional as she spoke about what she considers to be a moral imperative.

“We are not just a bunch of people who settled on the Lower East Side or the Hill district of Pittsburgh or South Philly,” she said. “We also lived in small town Jewish communities. We lived in places where we interfaced very, very closely with our non-Jewish neighbors – places where they don’t even remember we were once there.”

A small group of Katzes and Magids gathered for a photo at the Katz Family Reunion July 26 to July 28. Back, from left: Daniel Magid, Robinn M…