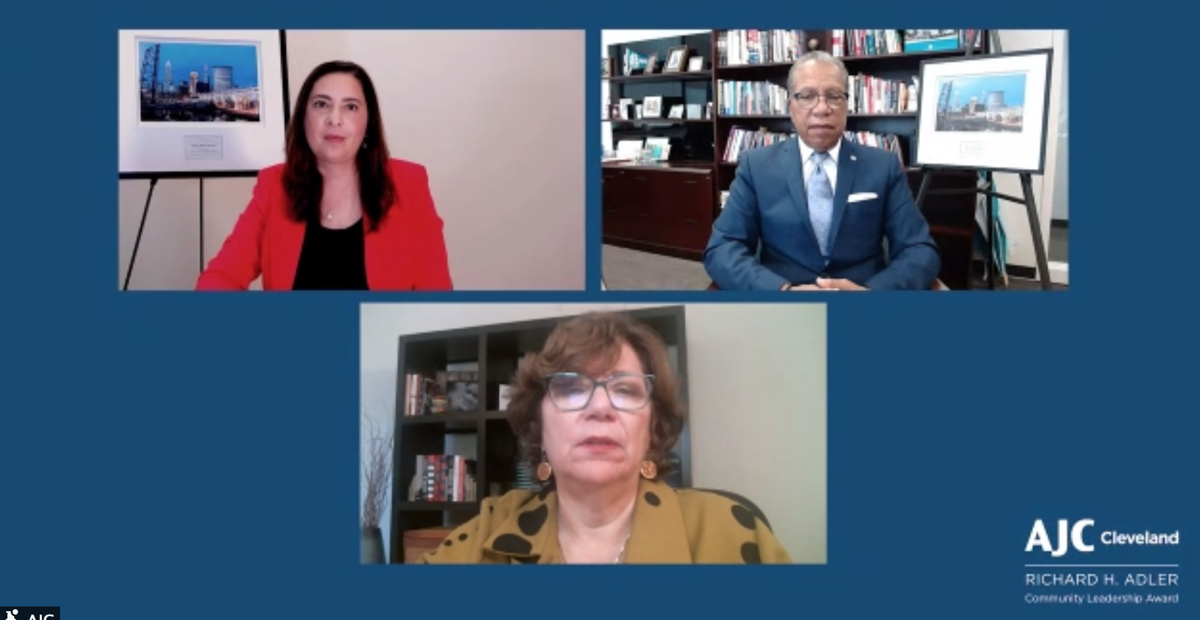 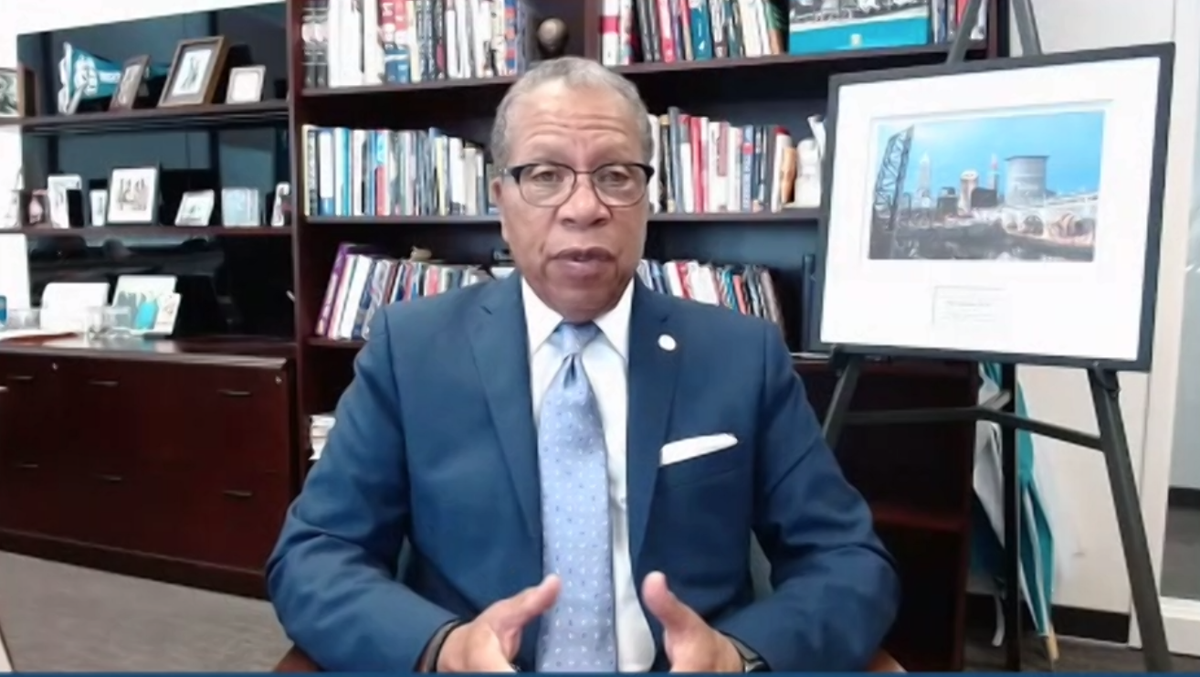 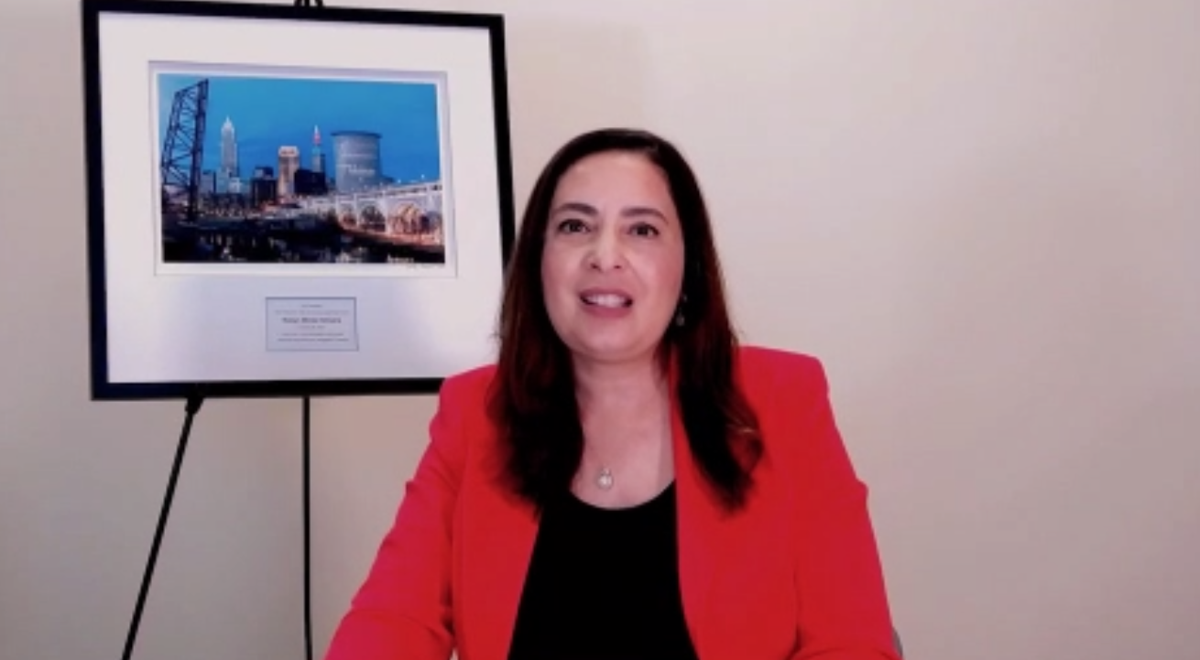 AJC Cleveland needed to wait a year to honor its 2020 Richard H. Adler Award winner due to COVID-19. As a result of that, however, AJC Cleveland was able to bring together about 170 people from around the community to watch not one, but two community leaders receive recognition for their work.

Cuyahoga Community College President Alex Johnson, the 2020 Adler Award winner, shared the virtual stage with 2021 award winner Robyn Minter Smyers. She is a partner and member of the executive committee at the law firm of Thompson Hine LLP in Cleveland, as well as the former office partner-in-charge, and the former chair of the firm’s diversity, equity and inclusion initiative.

The award, which has been given annually since 1996, honors Richard Adler’s commitment to the community, and serves as a tribute to his hopes and dreams for society. The award is presented to leaders who help transform the city of Cleveland and embrace the vision of the American Jewish community and whose work is grounded in Jewish values of chesed, caring, tzedakah, justice and tikkun olam, or repairing the world, accordsing to AJC Cleveland.

Jill Zimon, president of AJC Cleveland, described both Johnson and Minter Smyers as “civic leaders who make an exceptional impact on the community and the lives of all who live in it.”

Zimon specifically called out last month’s announcement of the Jack, Joseph and Morton Mandel Foundation’s five-year grant of nearly $1.5 million to establish and initially support the Jack, Joseph and Morton Mandel Youth Humanities Academy at Cuyahoga Community College. For Minter Smyers, Zimon mentioned the improvement the region has seen due to her “countless initiatives,” including her advocacy for racial and social justice, Democracy-building causes and education reform “all the while exuding integrity, grace, humor and sheer determination.”

Minter Smyers used her acceptance speech to tie together the values of the Adler family and her own family, which includes her African-American father and her mother that descended from Polish and Bohemian immigrants.

“My parents and the Adlers are cut from the same cloth,” Minter Smyers said. “And although my parents may not have known the Hebrew words l’dor v’dor (from generation to generation), they raised me and my two sisters to uphold the Minter family tradition of giving back.”

Her second reason for her gratitude, she said, was the power of community. She mentioned some of the major events that occurred over the past two years, including the COVID-19 pandemic, anti-black racism, surge in antisemitism, rise of anti-Asian hate crimes, storming of the U.S. Capitol, and the recent incidents between Hatian immigrants and the U.S Border Patrol at the Mexican-American border.

She said the bonds of community and civility seem to have frayed a bit, but that it is in this context that people turn to AJC Cleveland for leadership.

“(My parents) understood the importance of bringing people together across differences,” Minter Smyers said. “They were bridge-builders, like AJC Cleveland. And during their lifetimes they witnessed the incredible transformational power of alliances, particularly between the black and Jewish communities.”

Johnson began his speech by expressing his gratitude to the AJC for the honor, and accepted it on behalf of his colleagues at Tri-C, where he has been president since 2013 when he replaced Jerry Sue Thornton following her retirement. Johnson announced Oct. 13 he plans to retire June 30, 2022.

“They do this with great compassion in accordance with our values, and coincidentally, those of AJC – focused on caring, justice and repairing the world,” Johnson said. “This intersection is testimony to two great organizations that have chosen as their ultimate goal to change lives through civic engagement.”

To watch a recording of the program, contact cleveland@ajc.org.