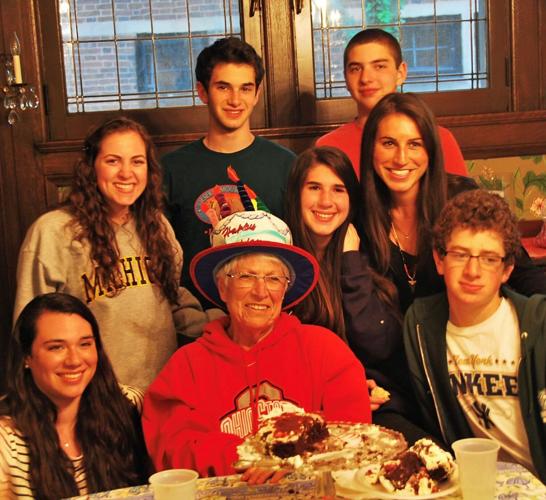 Marcia Lou Ungar with her seven grandchildren, who she referred to as the "Magnificent Seven." 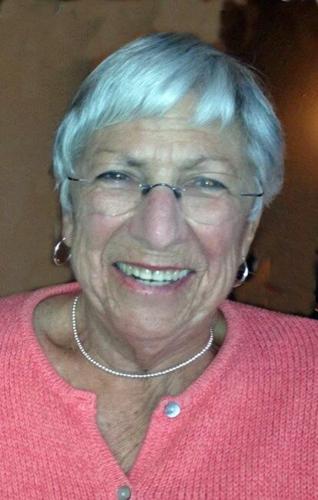 When asked how Edie Ungar-Shafron would describe her mother, Marcia Lou Ungar, her middle child and only daughter was at first at a loss for words – a pause filled by the loss of the matriarch of the Ungar family.

But, Edie Ungar-Shafron soon told the Cleveland Jewish News that her mother, Marcia Lou Ungar, affectionately referred to as “Kippy” in reference to her maiden name Kipperman, was “spirited, filled with life, kind, generous and family centered.”

Ungar, the namesake of Mar-Lou Shoes in Lyndhurst, died on Sept. 16 at age 89.

“She was very perceptive,” said Ungar-Shafron, a Shaker Heights resident. “She was warm and welcoming, and very opinionated, which was great. She never hesitated to stand her ground.”

Mar-Lou Shoes opened in 1958 under the leadership of Ungar’s late husband, Henry “Bud” Ungar, when his wife couldn’t find shoes for her size 10½ narrow feet. The store’s first location was in the Old Arcade in downtown Cleveland, later expanding to four locations from 1972 to 1994, until all four stores were folded into its current store in Lyndhurst.

“(Mar-Lou Shoes) was a tremendous source of pride for her,” Dan Ungar, of Moreland Hills, told the CJN. “She never worked in the business herself, but she was there side-by-side with our dad in her support of him. She understood the fortitude it took for him to work hard and develop his own work ethic to make it succeed. She was so incredibly proud of it, ever since I can remember. The fact something my father built and what I continued to build was named after her – she loved it, it made her beam.”

In addition to being the name inspiration of their family business of 64 years, Dan Ungar said their mother was a woman of strong convictions.

“Her opinions were driven by the idea of always making things better,” Dan Ungar said. “As corny as it sounds, the idea of tikkun olam ... Mom did that in her own way. It could’ve been buying a gift for a friend’s baby or talking about the important politics of the day, whether that was abortion, conservatives versus liberals, public education or sensible gun legislation. ... She wouldn’t mince her words to you about what she thought was right and wrong. If you needed someone on your side, she was the person to have. If you weren’t on her side, watch out.”

Calling their parents a “dynamic duo,” Edie Ungar-Shafron said not only did the pair have great love for each other, but that love was felt by their children and grandchildren.

“She had an amazing impact on her grandchildren and obviously our lives, too,” she said, recalling the time she spent playing the flute with her mother accompanying her on piano. “I won so many awards by her side. I was able to accomplish so much because of my mom. She had a keen ear and enriched my life with music and by just being her.”

Of her grandchildren, who she called the “Magnificent Seven,” Dan Ungar said she was so fond of each of them.

“I kid you not, when my son was very little, he’d have conversations with his grandmother about politics and the news of the day,” he said. “The bottom line is that behavior brought the grandkids together. She was the matriarch of the family. We got together most Sundays for decades. She was that quintessential queen mother of the Ungar family.”

Both Edie Ungar-Shafron and Dan Ungar, along with their eldest brother, Michael Ungar, of Cleveland Heights, recognize their duty to carry on the legacy of their parents, continuing to cultivate a family full of love and laughter. But specifically in the memory of their mother, that legacy is being an “upstanding citizen,” “politically active” and “kind to all,” Edie Ungar-Shafron said.

“She lives on in my and our kids’ hearts, forever,” she said. “All of us. We were so lucky to have her for so long.”

Dan Ungar said, “There is that forever connection with the business. But, her lasting legacy is going to be the impact she made as a mother, grandmother, great-grandmother and friend. Imparting her wisdom and sense of what was right and wrong. If something was important to the world, it was important to her.”